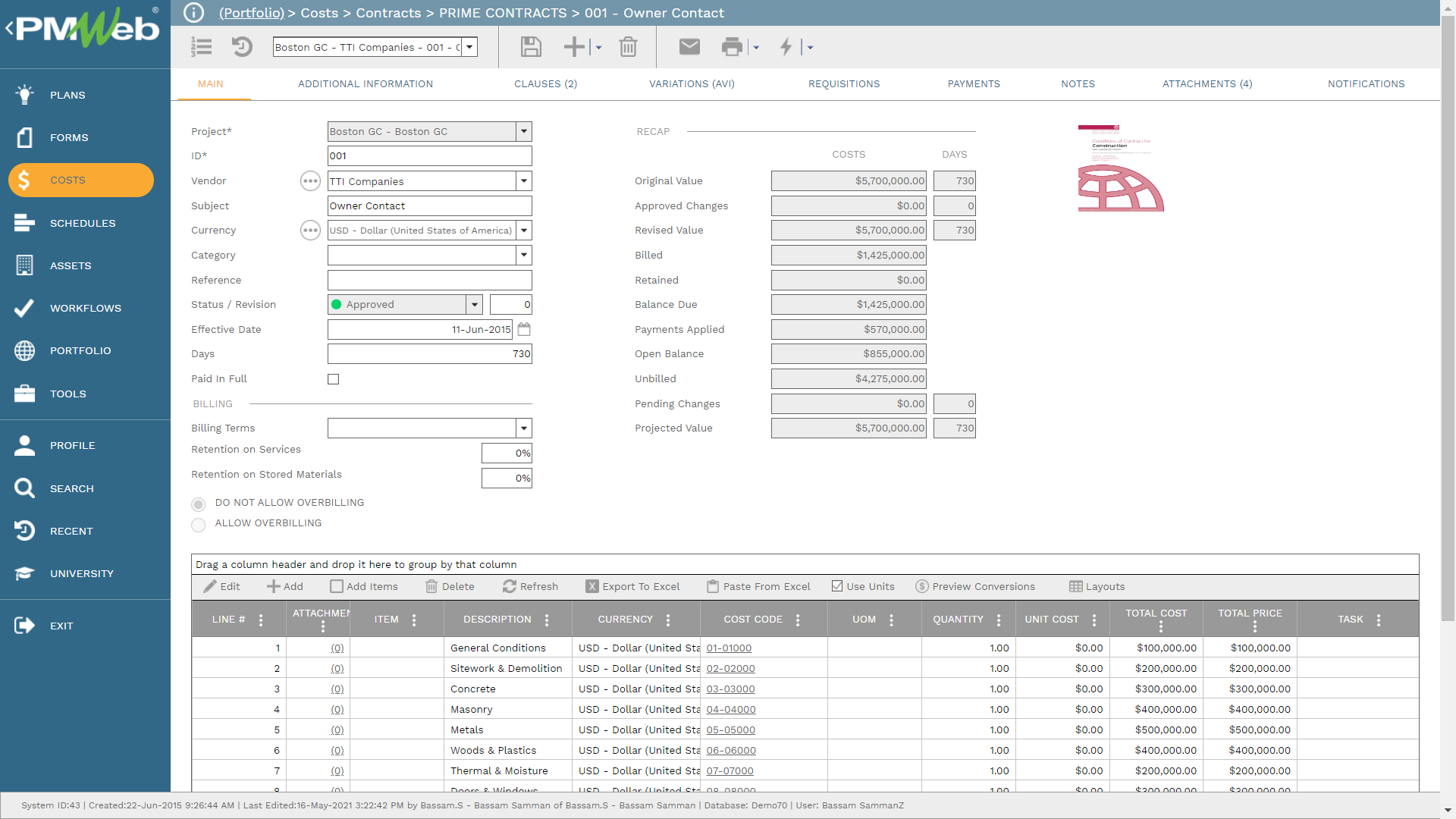 The PMWeb prime contract module will be used to capture all revenue or income contracts on a project. The PMWeb prime contract module allows copying and pasting the BoQ/SoV or revenue line items from MS Excel. Each line item should be associated with a cost breakdown structure (CBS) or cost account level, WBS level, project schedule activity, work package reference for EWP, PWP, CWP, or SWP, and the BIM object identification. In addition, and similar to other cost management processes in PMWeb, the commitment line items can be in different currencies. Further, a revenue or income contract can be selected to be either a unit price or a lump-sum agreement.

All changes to the revenue or income contact agreements will be captured in the Contract Change module. If the project control system (PCS) was managed by the contractor, then all change orders whether they were approved, pending approval, disputed, or withdrawn will be captured. This will provide the contractor with a better understanding of the anticipated revenue that will be generated from the project.

Similar to all other PCS processes managed in PMWeb, all change orders must include all supporting documents relevant to the submitted change. These supporting documents, which could include drawings, specifications, and pictures, among many others, will be stored in the PMWeb Document Management repository. In addition, all records that are related to project communications, such as daily reports, meeting minutes, correspondence, submittals, RFIs, requests for inspection, permit, and occurrence reports, among many others need to be linked to the relevant potential change order or change order record.

In addition, a workflow will be assigned to the change order template to ensure all changes that the contractor is raising in the project had been formally reviewed by the commercial, contract, legal and other departments before it gets formally submitted to the Project Owners of his authorized representatives. The change order request needs to be printed in the exact format set by the Project Owner in receiving such requests.

The Project Owner can also use the change order module to capture all changes made to the asset’s sale, long-term leases, operation, and others that apply to revenue or income contracts. All other features of attaching documents, linking records, and associating a workflow will be also applicable. 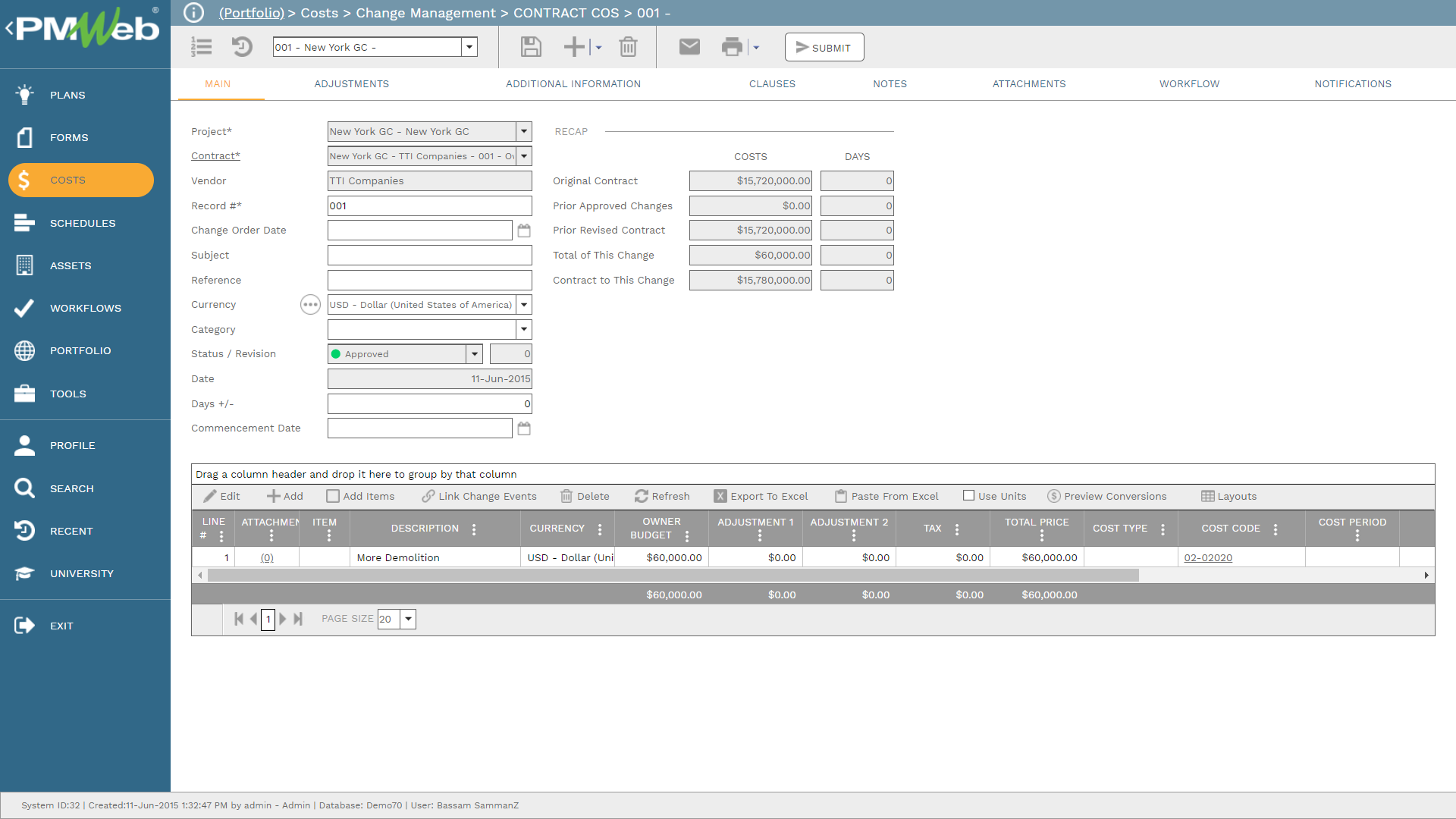 As the project progresses, if the contract was the entity managing the PCS, the contractor will use the requisitions module the monthly interim payment certificates (IPC) for the approved work-in-place which needs to be formally submitted to the project owner or his authorized representative.  If the PCS was managed by the Project Owner, the payment requisition will be used to issue the invoices for the assets’ sales, long-term leases, and other sources of revenue. 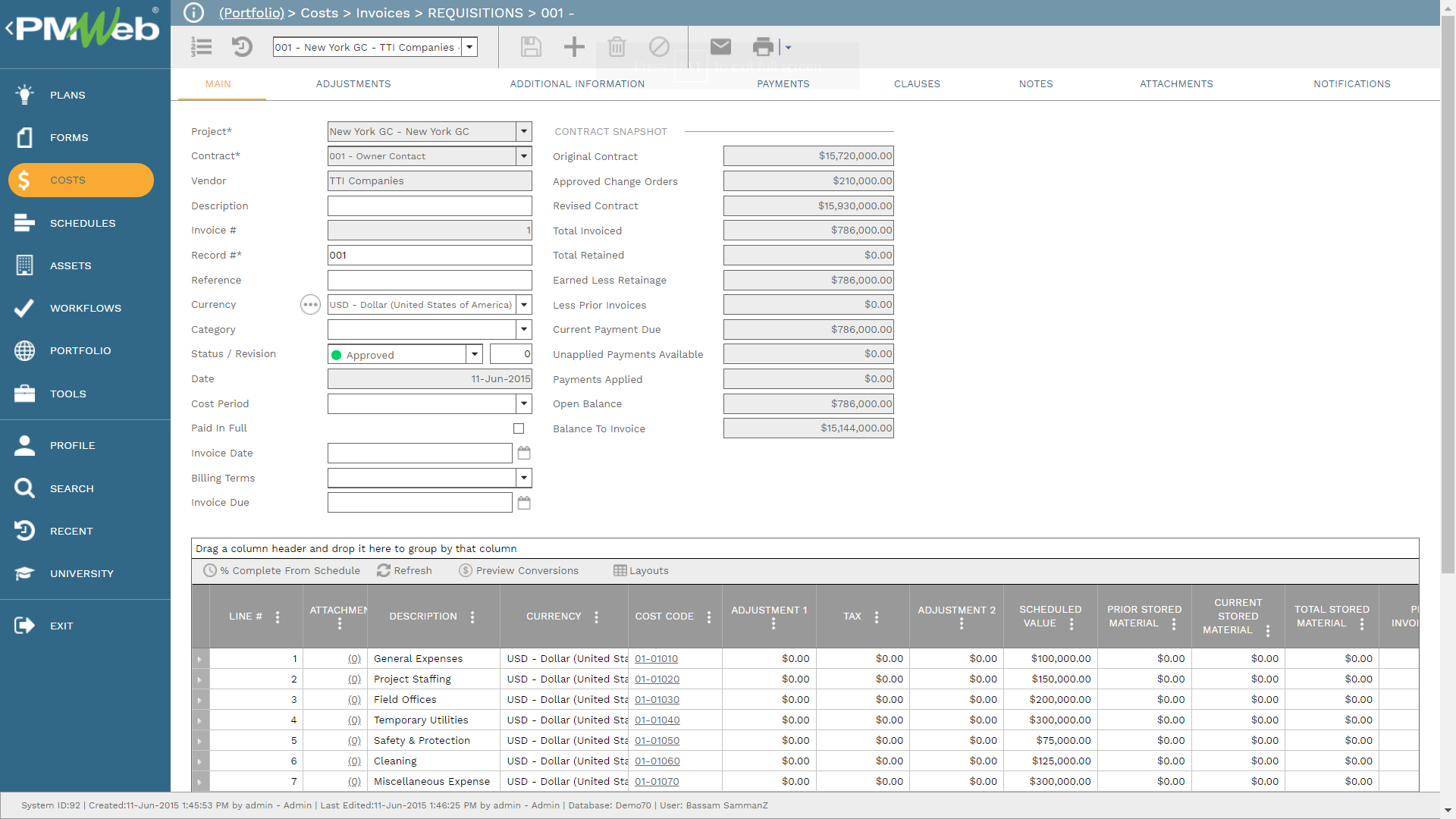 For contractors whose revenue contract with the project, the owner is remeasured contracts or contracts that the interim payment certificate (IPC) depends on the actual quantities in place that had been accepted, the PMWeb joint measurement module allows recording the details of those work items on daily basis for which at the end of each week, the captured work in place can be formally reviewed and approved. Those quantities will become the basis for quantifying the approved work in place in the interim payment certificate (IPC). 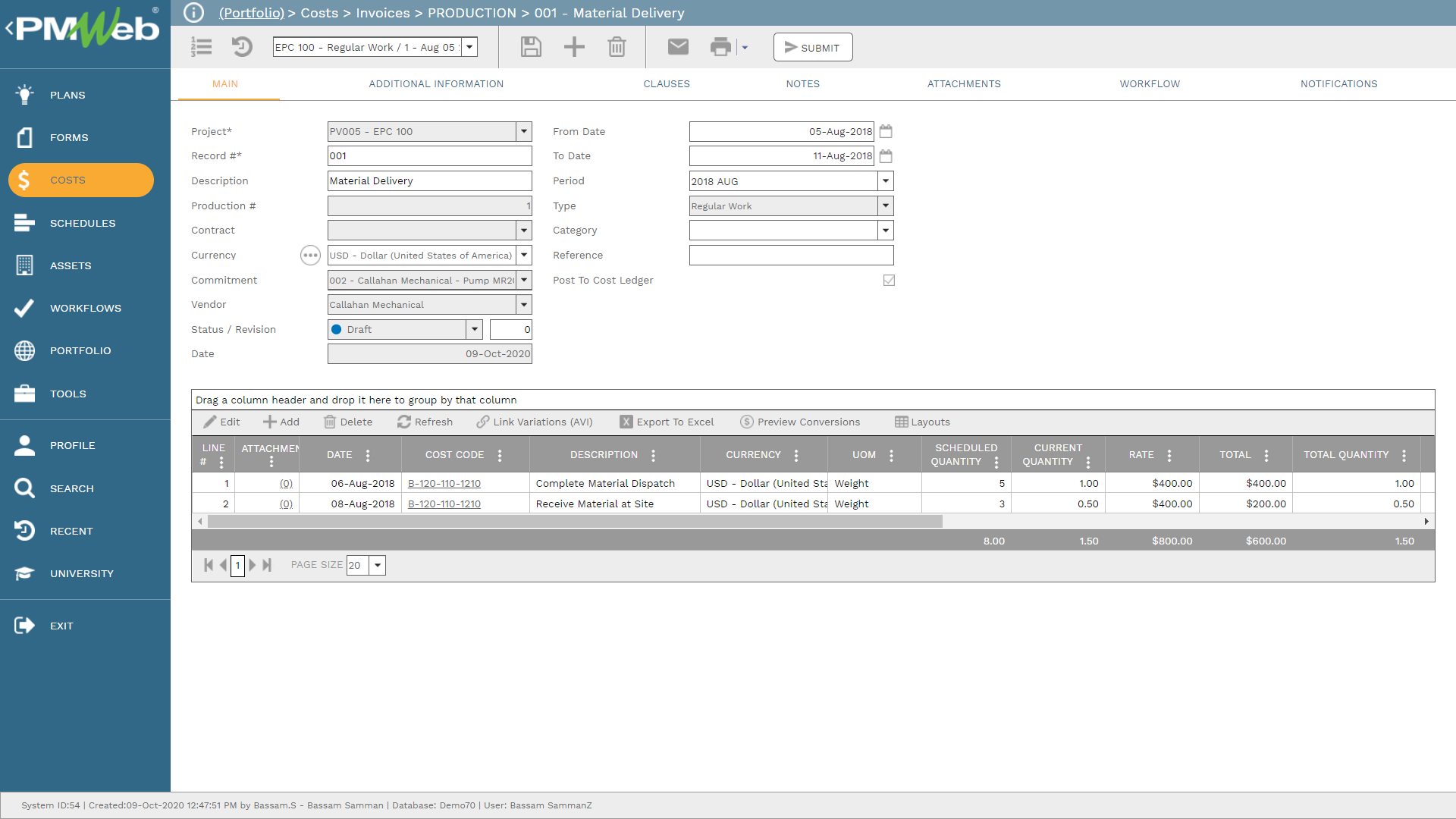 The recipient of the requisition invoices whether they were issued by the Contractor to the Project Owner or by the Project Owner to assets buyers and tenants will not have access to PMWeb. Accordingly, those invoices are to be printed in the exact required output format so they can either be wet-signed and stamped or digitally signed before they are sent to their intended recipients.

The PMWeb report writer allows designing those output forms in the exact format needed for each project. Those output forms will have the branding and logos needed for the formal communication of those revenue invoices. The sample below is an example of the 150+ forms and reports that come ready with PMWeb.