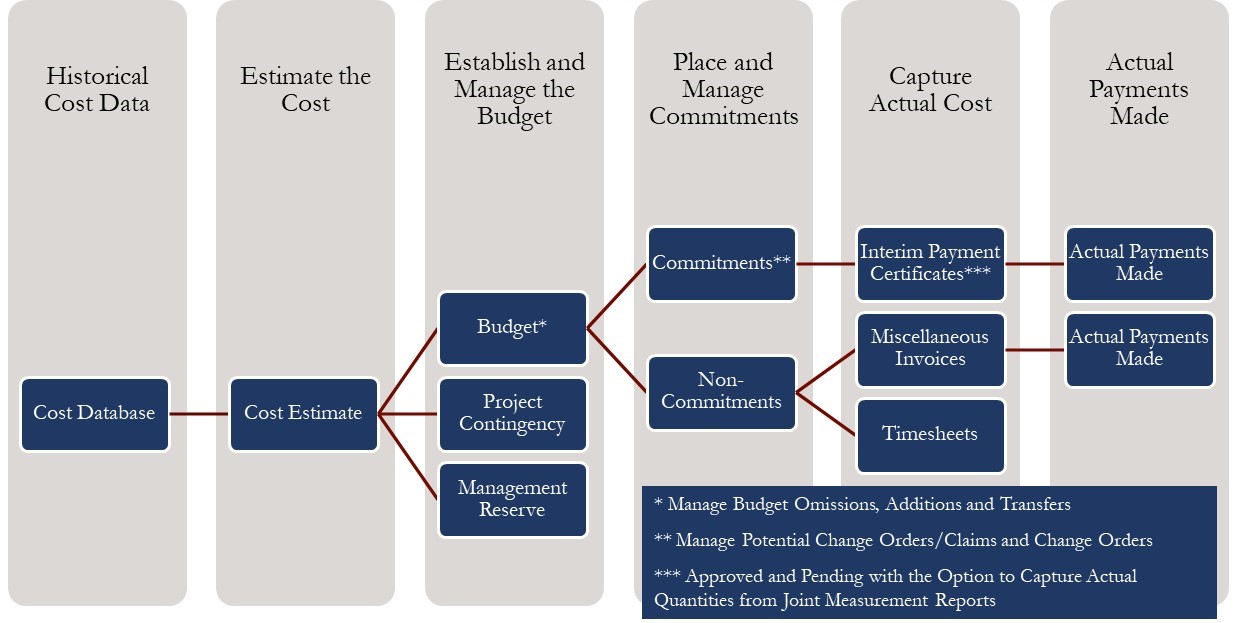 A project control system (PCS) needs to have the functions to capture the project’s definite estimate which will become the basis for establishing the project’s baseline budget and the reserve or buffer that the budget should allow for contingency and management reserve. The baseline budget needs to be aligned with all transactions that will be used during the project duration to capture the actual cost. Those could be from commitments like contract and subcontract agreements, purchase orders, and agreements between the company’s business units. The actual cost against commitments will be captured from the monthly interim payment certificates and any other invoices issued against purchase orders. In addition, the actual cost could be incurred from non-commitment sources like those for miscellaneous invoices and timesheets.

At the end of each progress period, the data captured in the current approved budget at completion (BAC), planned budget spending value to date (PV or BCWS), the actual commitment and non-commitment cost incurred to date (AC) whether it was for only approved cost or approved and pending approval cost, the percent complete for work in place captured from the project schedule (%) and the earned budget value (EV) for completed works which will be calculated by the multiplying the project schedule (%) by current approved budget at completion (BAC) will be calculated automatically. Those values will become the basis for calculating the other earned value management (EVM) measures and indices.

For projects that require managing the income or revenue for the completed work in places like the agreement between the Project Owner and the Contractor when the PCS is managed by the Contractor or the contract agreement for assets sale, long-term leases, and other forms of revenue for Public-Private-Partnership (PPP) and Build-Operate-Transfer (BOT) agreements when the PCS is managed by the Project Owner. For those projects, there is a need to manage those agreements, changes that could have happened, invoices issued for work done, and payments received against those invoices.

The definite cost estimate will include both direct and indirect costs. Direct Costs also known as Variable Costs are the costs that are proportional to the projects such as materials for products, workers, and project managers. On the other hand, Indirect Costs also known as Fixed Costs are the costs that are expended regardless of the size of the Project. These include project finance, bonds and insurance, cost escalation, project management and equipment, and general expenses.

In other words, regardless of whose perspective the project control system (PCS) will be managed, the definite cost estimate will include all line items that actual cost or expenses will be charged against. Each cost estimate line item should be tagged with the BoQ/SoV reference number, Work Breakdown Structure (WBS) level, Project Schedule Activity, Cost Breakdown Structure (CBS) level, Work Package Reference for Engineering (EWP), Procurement (PWP), Construction (CWP) or Startup (SWP), and the BIM Object Reference Number for projects where BIM is being used. 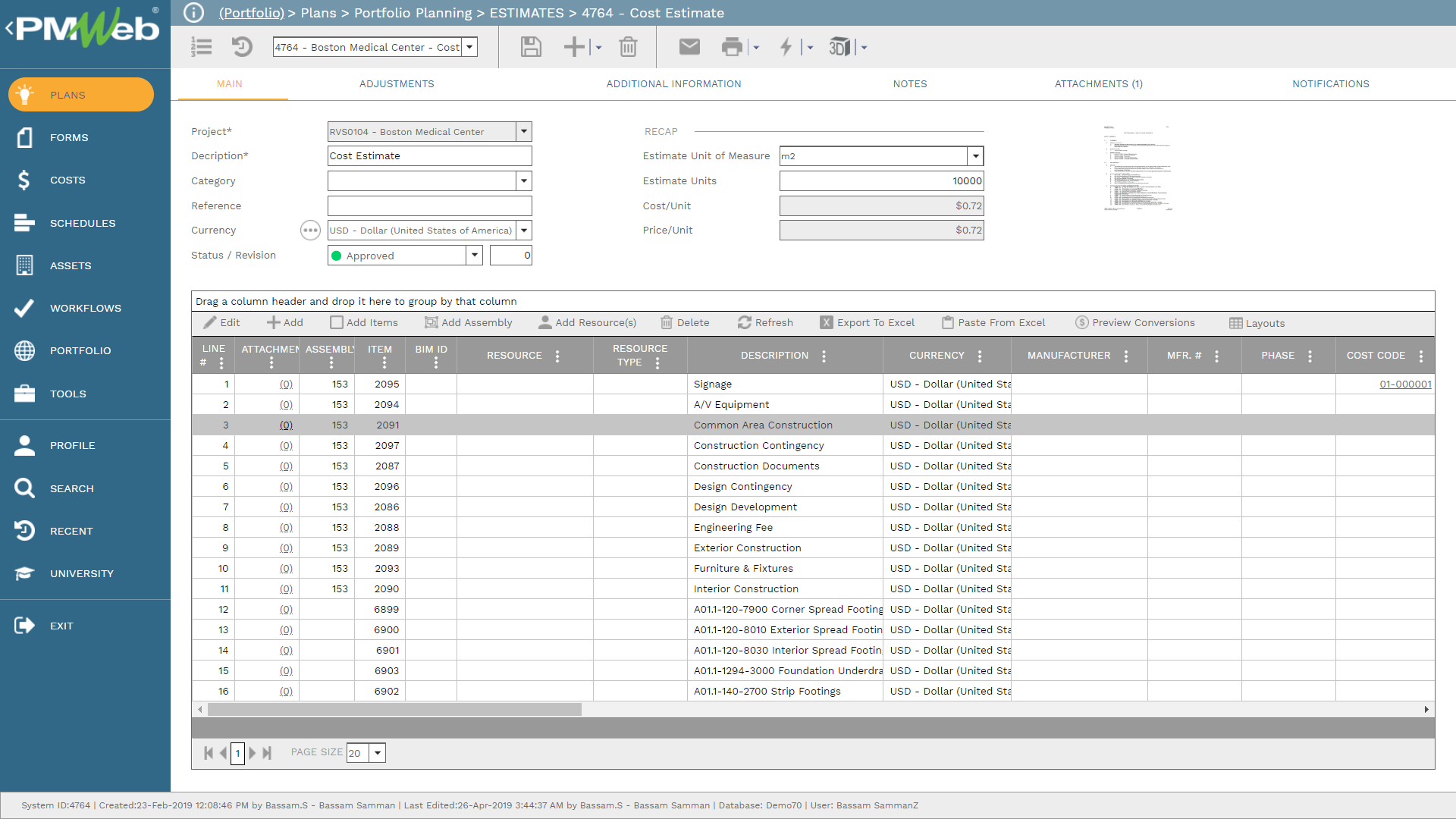 The interactive BIM Cost Estimate report will enable the project team to analyze and investigate the estimated project cost in an easy-to-understand format that relates the estimate to the different BIM model objects. Of course, the BIM can be rotated to visualize the selected objects better. 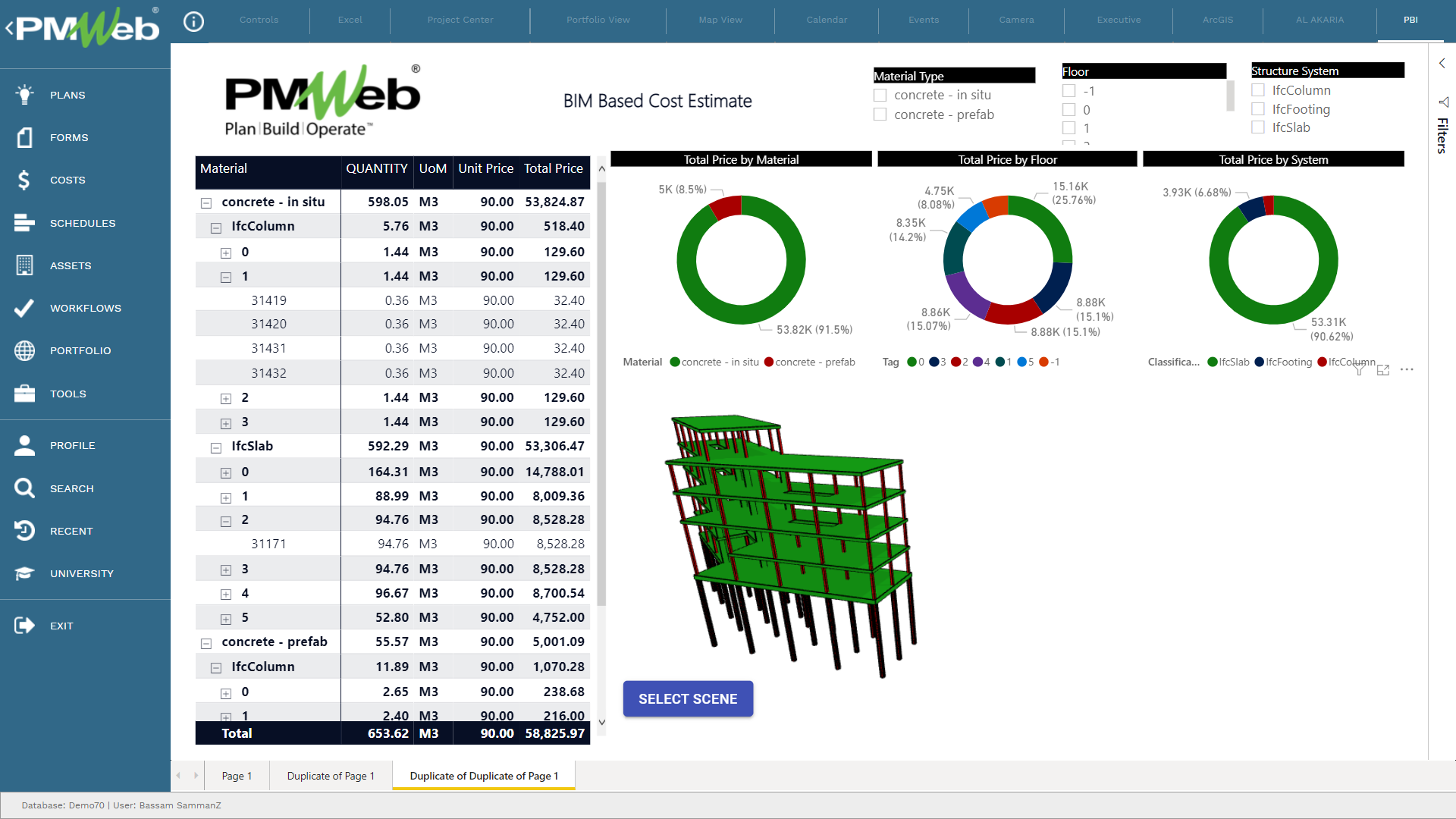 For contactors and even project owners who have the requirement to manage parts of the scope of work (SoW) and services in currencies that are different from the project’s currency, PMWeb cost estimate allows using different currencies for each line item. For example, for a project that will be delivered in the United Arab Emirates (UAE), where the project’s currency is UAE Dirhams (AED), it might be required to procure specific equipment and furniture items from the United Kingdom, France, Germany, Spain, and Japan. In this case, the cost of those items will be either in British Pounds (GPB), Euros, or Japanese Yen.

The PMWeb currency conversion module will be used to define the currencies to be used on the projects’ portfolios managed by either the Project Owner or Contractor. This will include determining the currency name, currency sign and whether it will appear to the left or the right of the currency amount, default and current currency conversion rates, and the number of decimals, which could be up to five decimal points. The currency exchange rates can be fixed for all managed projects or be project-specific. 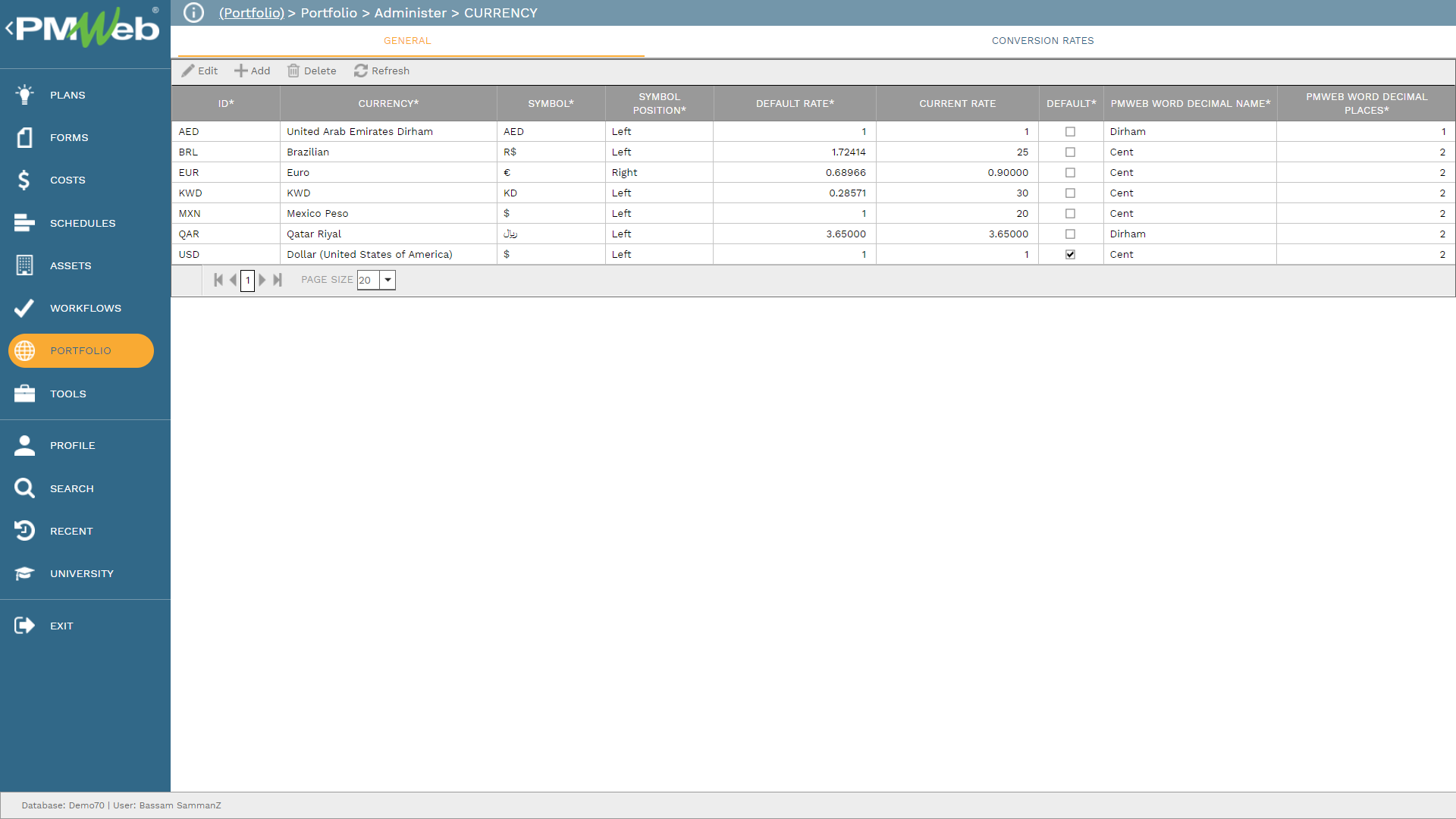 PMWeb also allows linking the conversion rates to a currency exchange website where those rates will be automatically updated at the selected time intervals. To accommodate the different types of currencies that could be used on a project, PMWeb allows having up to five decimal points for the currency field. 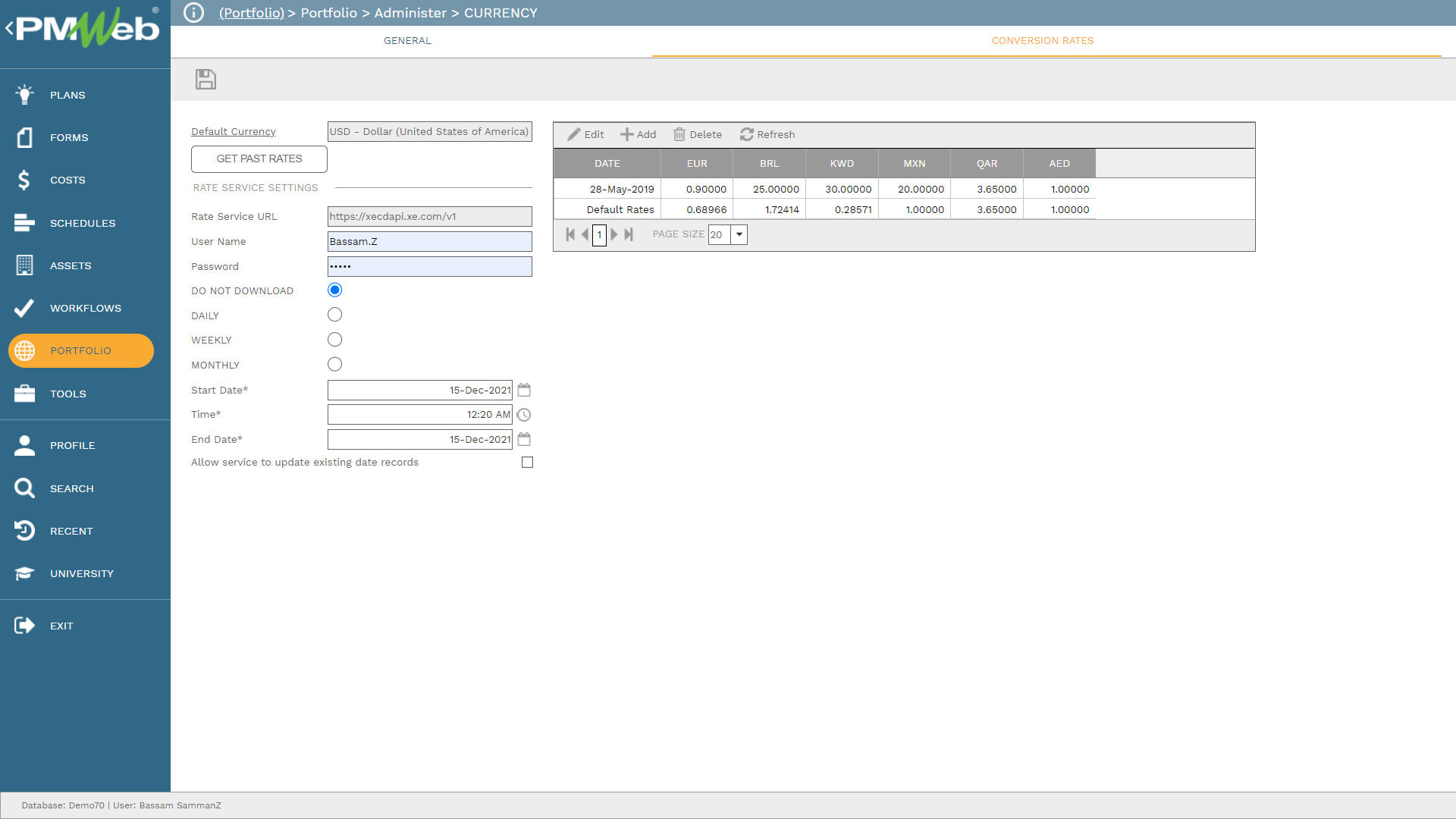 This will enable either the Project Owner or Contractor to create reports to detail their exposure to fluctuations in the currency exchange rates. The option of having multiple currencies for each cost line item is a default function of PMWeb and can be used on all cost-related processes. 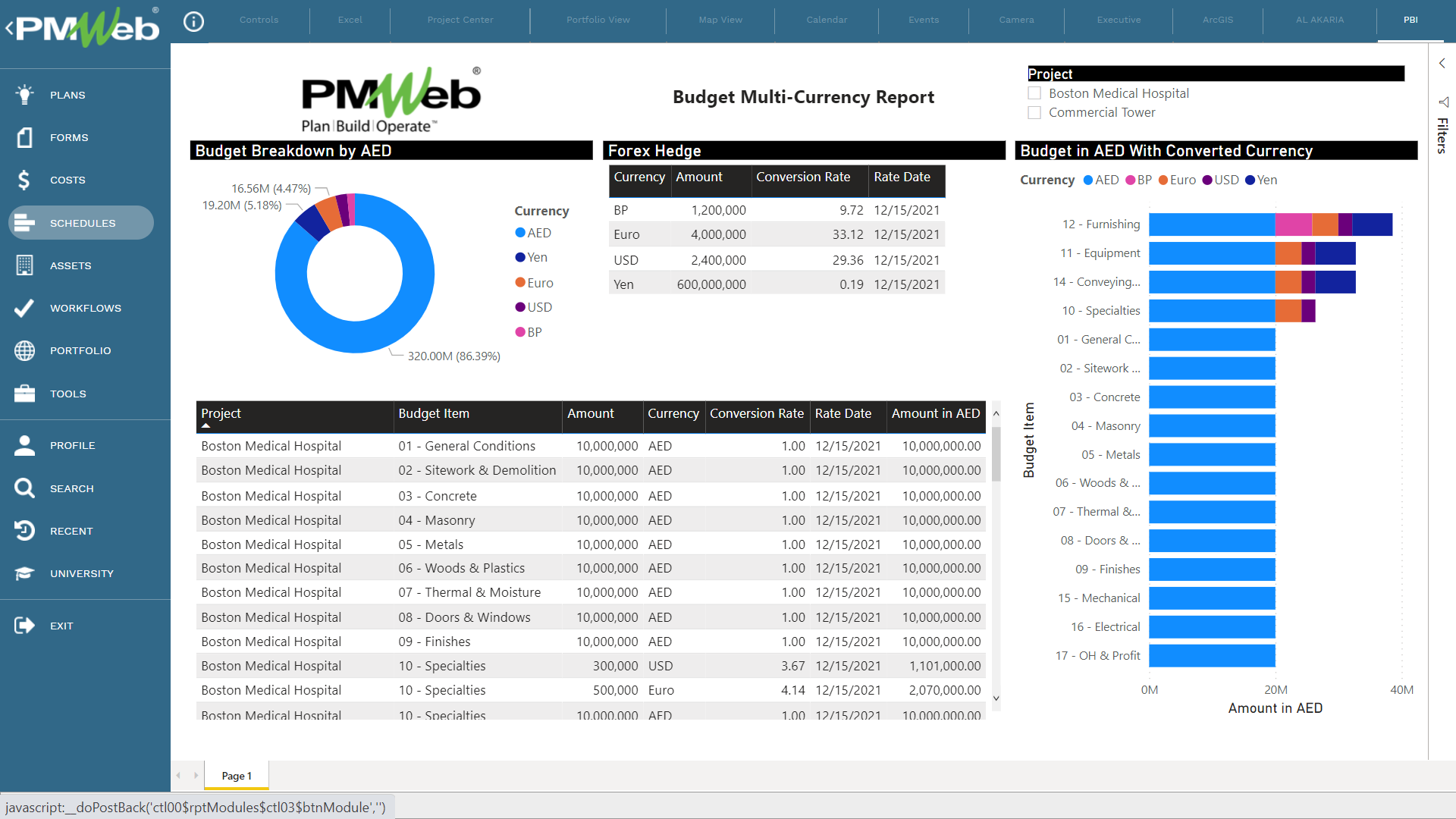 For project owners, one of the important functions that PMWeb can provide is managing the purchase history of the definite cost estimate line items. To take advantage of this function, project owners need to adopt a globally recognized format for their Bill of Quantity (BoQ) or Schedule of Value (SoV) documents. Those could be for example the Construction Specifications Institute (CSI) UniFormat™ building system or the Royal Institution of Chartered Surveyors (RICS) New Rules of Measurement: Order of cost estimating and cost planning for capital building works (NRM 1). 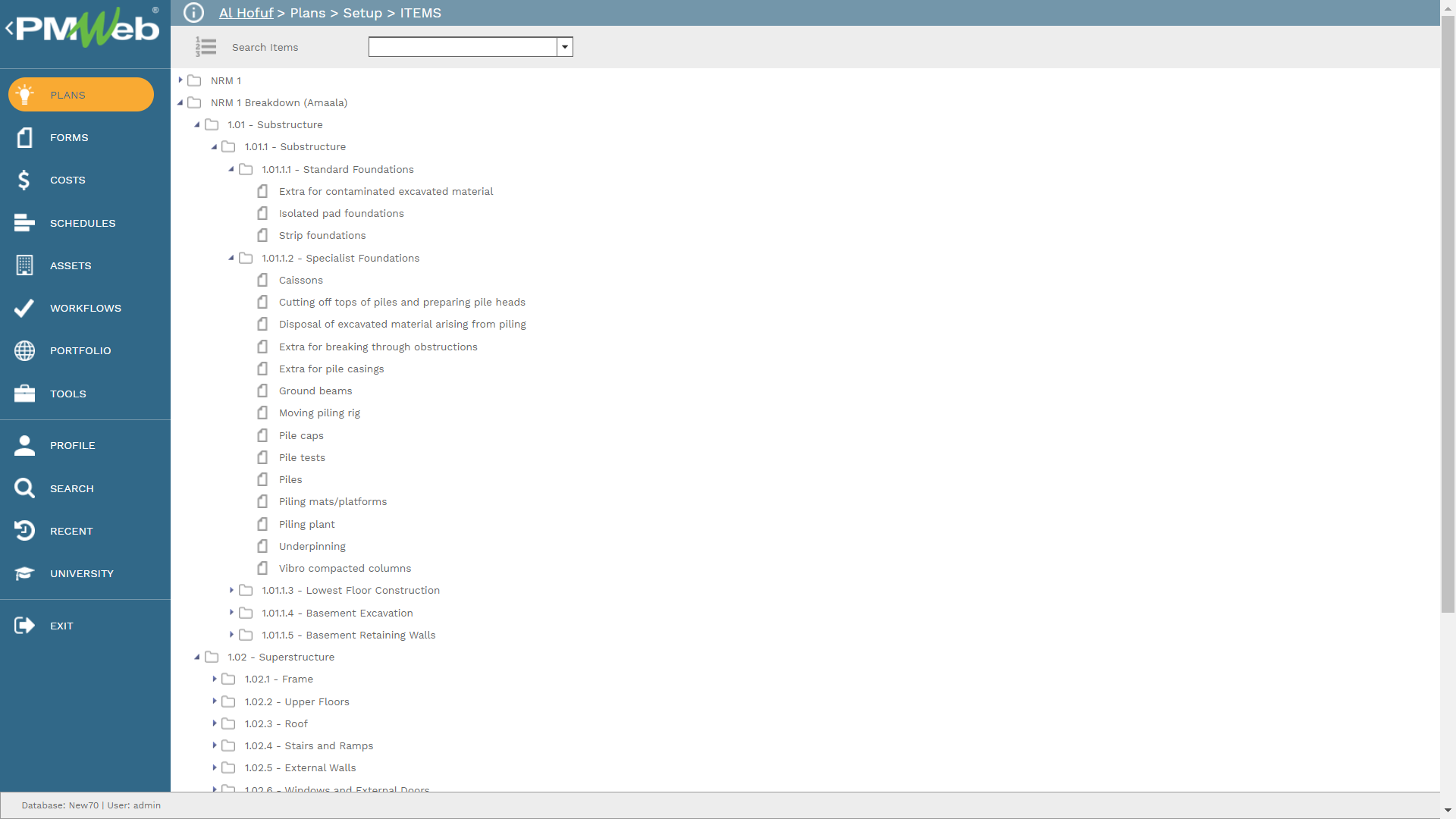 The standardization of the BoQ/SoV item number across the complete projects’ portfolio will enable PMWeb to capture the cost details of those items from the different contracts awarded for delivering the project portfolio. So for a project owner, those will be the line items of the contracts awarded to the contractors to deliver the projects’ scope of work (SoW). On the other hand, for a Contractor, those will be the line items of the subcontracts and purchase orders awarded to the subcontractors, suppliers, and vendors to deliver the projects’ outsourced scope of work (SoW). 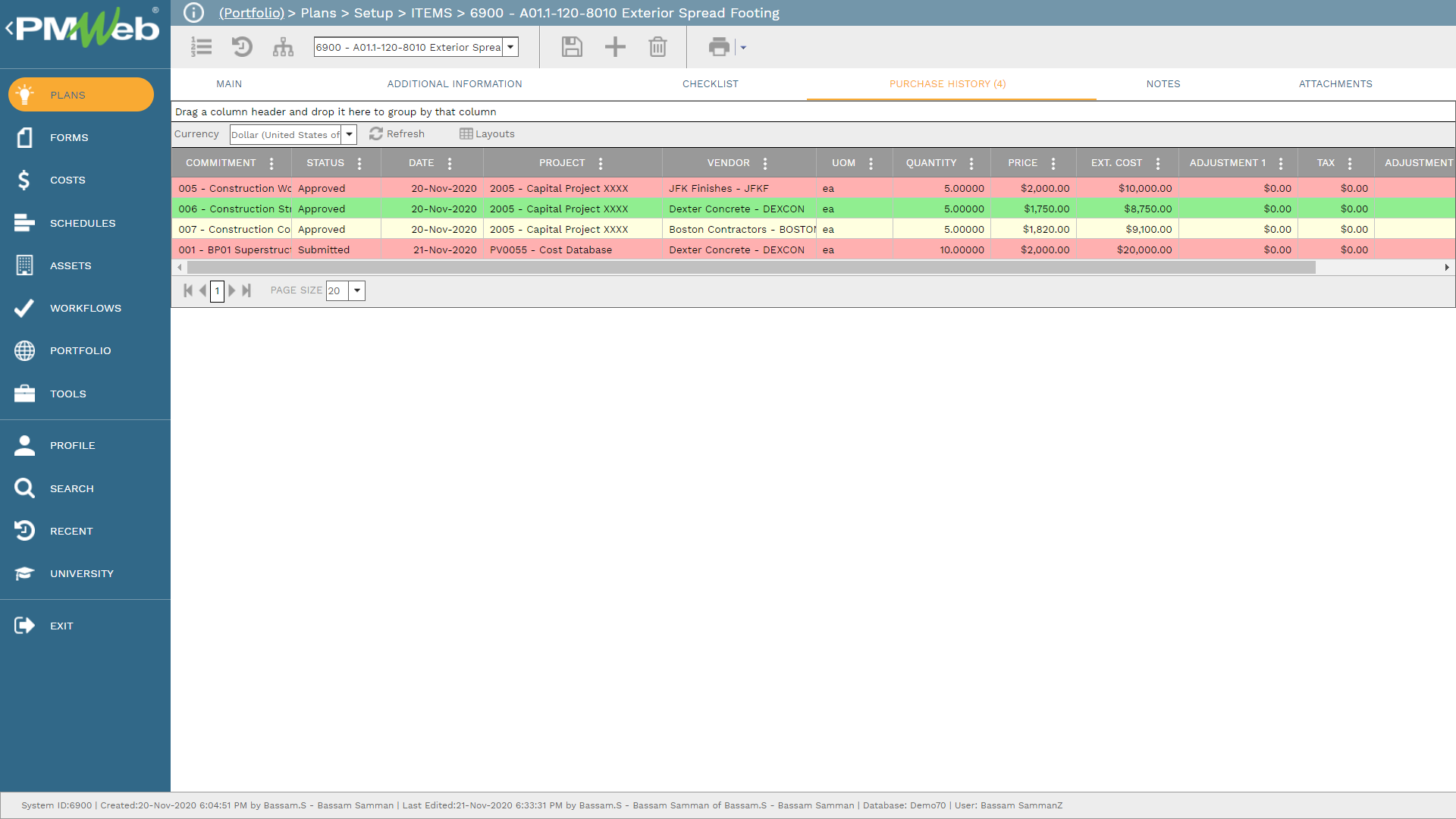 When the definite cost estimate is approved either through the assigned workflow or by changing the status to approved, the project owner, as well as the contractor, can use this data to generate other cost-related processes in PMWeb. These include the project budget, project budget adjustments and transfers, procurement bid packages, and awarded contracts for the outsourced scope of services. 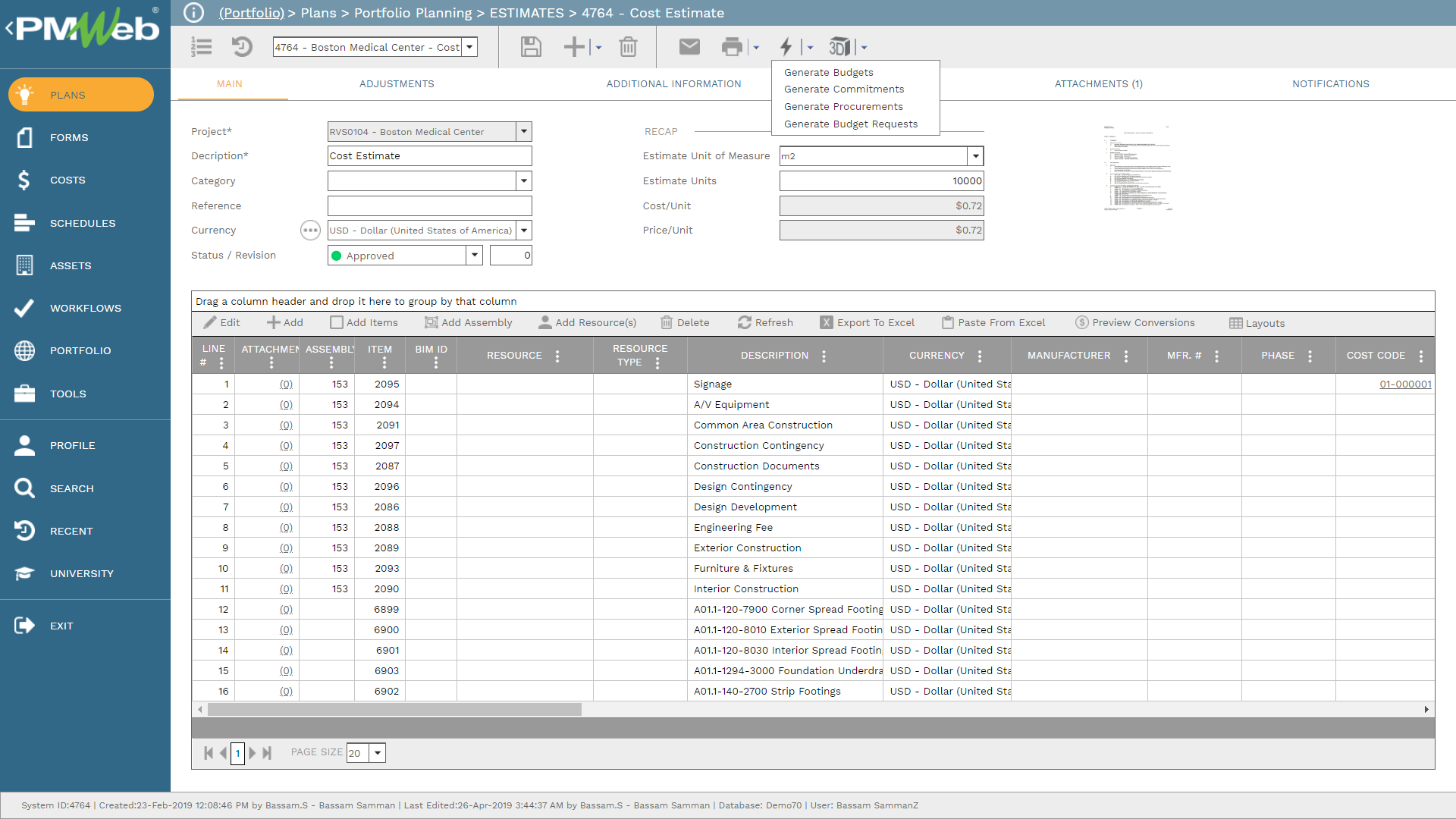