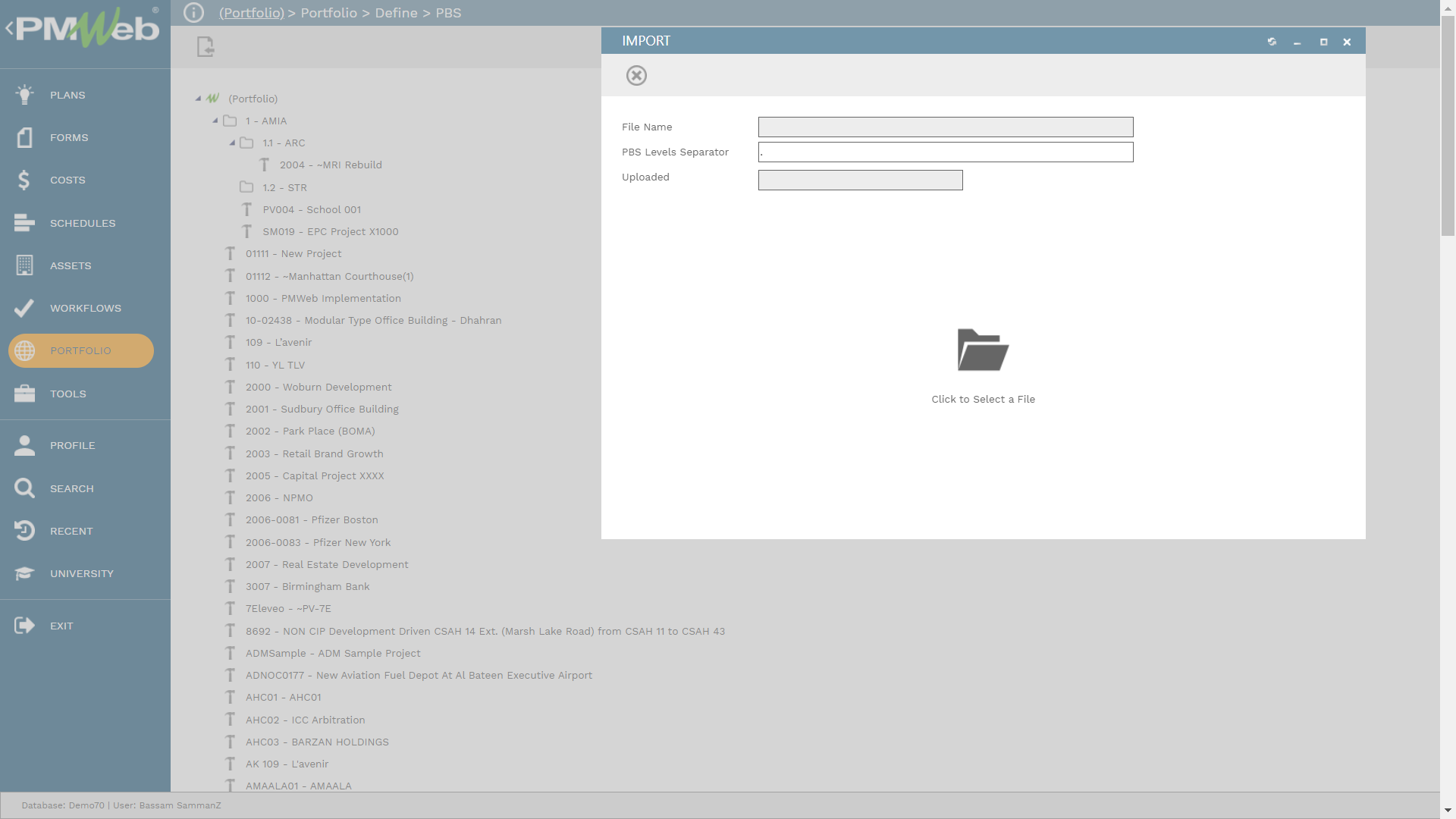 For most engineers, and in particular, those involved in setting and managing the project control system (PCS) for construction projects, the art of structured thinking tends to be the approach used by them in solving problems and delivering results. They usually start with the anticipated result or possible solution in mind and then start decomposing it into smaller elements that can be analyzed, planned, managed, monitored, and controlled. Those elements will be structured in a “parent-child” format to visualize how the scope of work was decomposed.

The level of detail will usually depend on the information available to those individuals when decomposing the scope of work. That is why the concept of progressive elaboration is an integral part of every breakdown structure. In other words, the created breakdown structures will continue to be decomposed as more information becomes available on what needs to be planned, managed, monitored, and controlled.

The PBS will be defined and standardized in all software applications used by the project control system (PCS) including the planning and scheduling software as well as the Project Management Information System (PMIS) software. The PMWeb Project Breakdown Structure (PBS) module will enable defining the PBS to the required levels. In addition, there is the option to import the PBS levels to eliminate the redundancy in creating this structure. For each project to be managed in PMWeb or any other PCS application, the relevant PBS level will be assigned to the project.

Nevertheless, the most known breakdown structure is the Work Breakdown Structure (WBS) which is used to decompose a project’s scope of work into more manageable work packages. The WBS is an integral requirement for defining the project’s scope of work and developing the project’s integrated baseline schedule. Similar to the PBS, the WBS will be defined and standardized across all PCS software applications.

For PMWeb, the WBS can be created directly in PMWeb, imported along with the Primavera P6 or MS Project, or imported from an MS Excel file. Regardless of the option selected to create the WBS, the WBS levels should be identical to all other WBS levels used in the PCS. 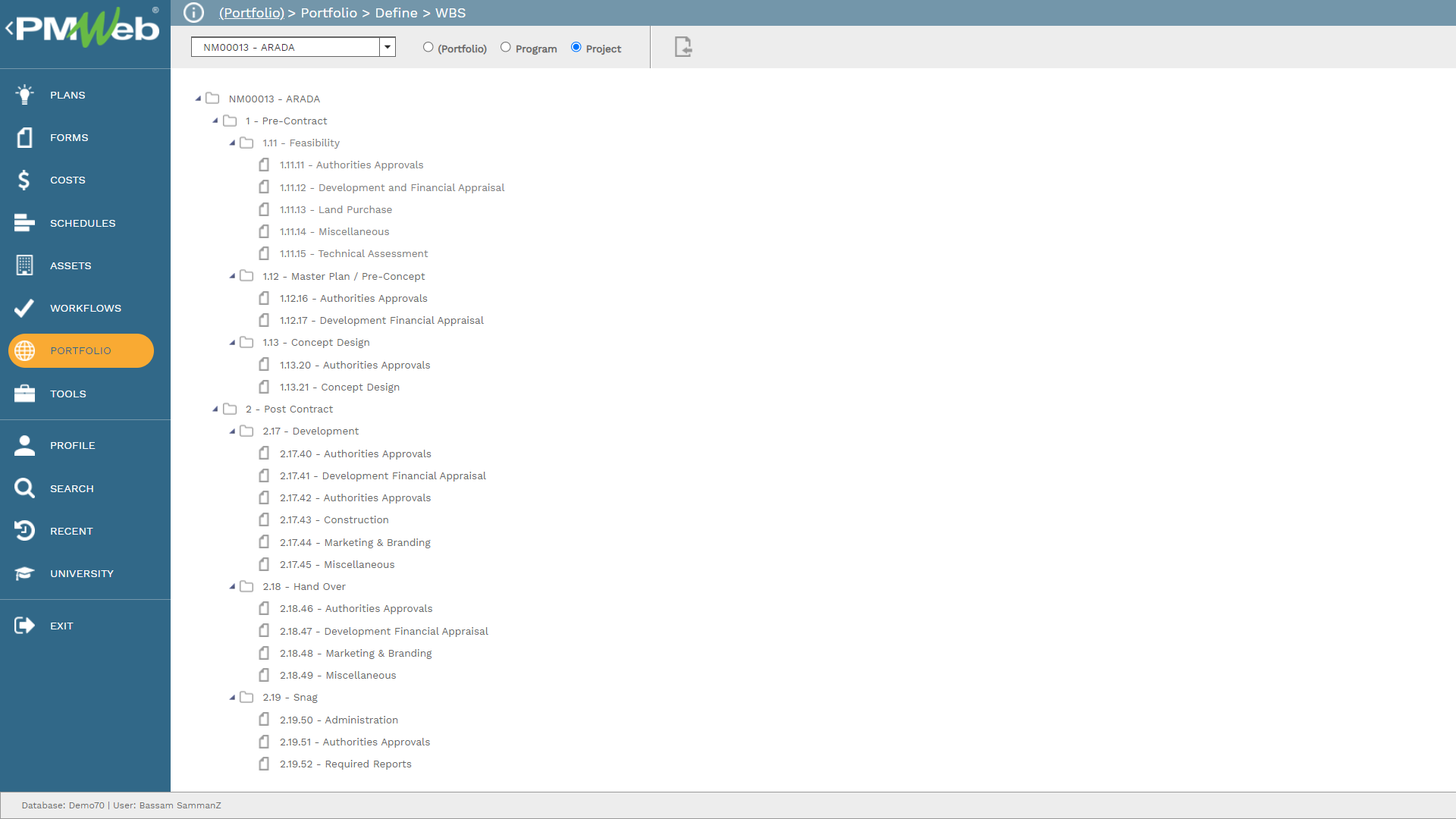 The WBS SoW template will be used to create the WBS dictionary report. This report will enable the project team to control what work is done and when to prevent scope creep and increase understanding of the effort of each task. The WBS dictionary report will include a brief definition of the scope or statement of work and the defined deliverable(s) for each WBS component. 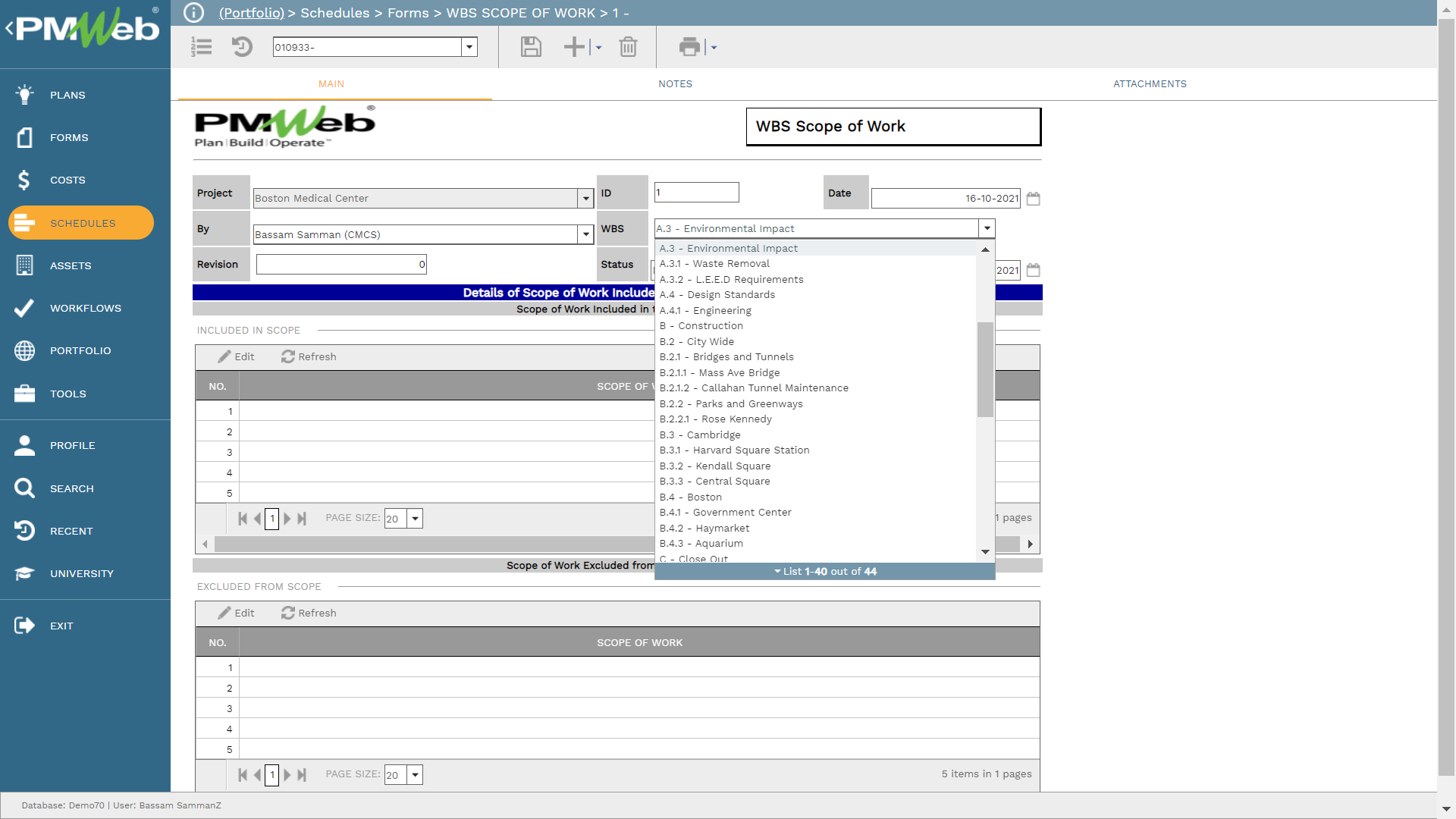 The third breakdown structure is the Organization Breakdown Structure (OBS) which is used to identify all the roles and responsibilities in a project. The OBS breaks down a project into descending levels of responsibilities, naming all the individuals required to supervise and manage the deliverables named in the project scope of work. The OBS is mainly used in the planning and scheduling of software applications to identify the responsibility for the tasks that are part of an engineering, procurement, construction, or commissioning work package. 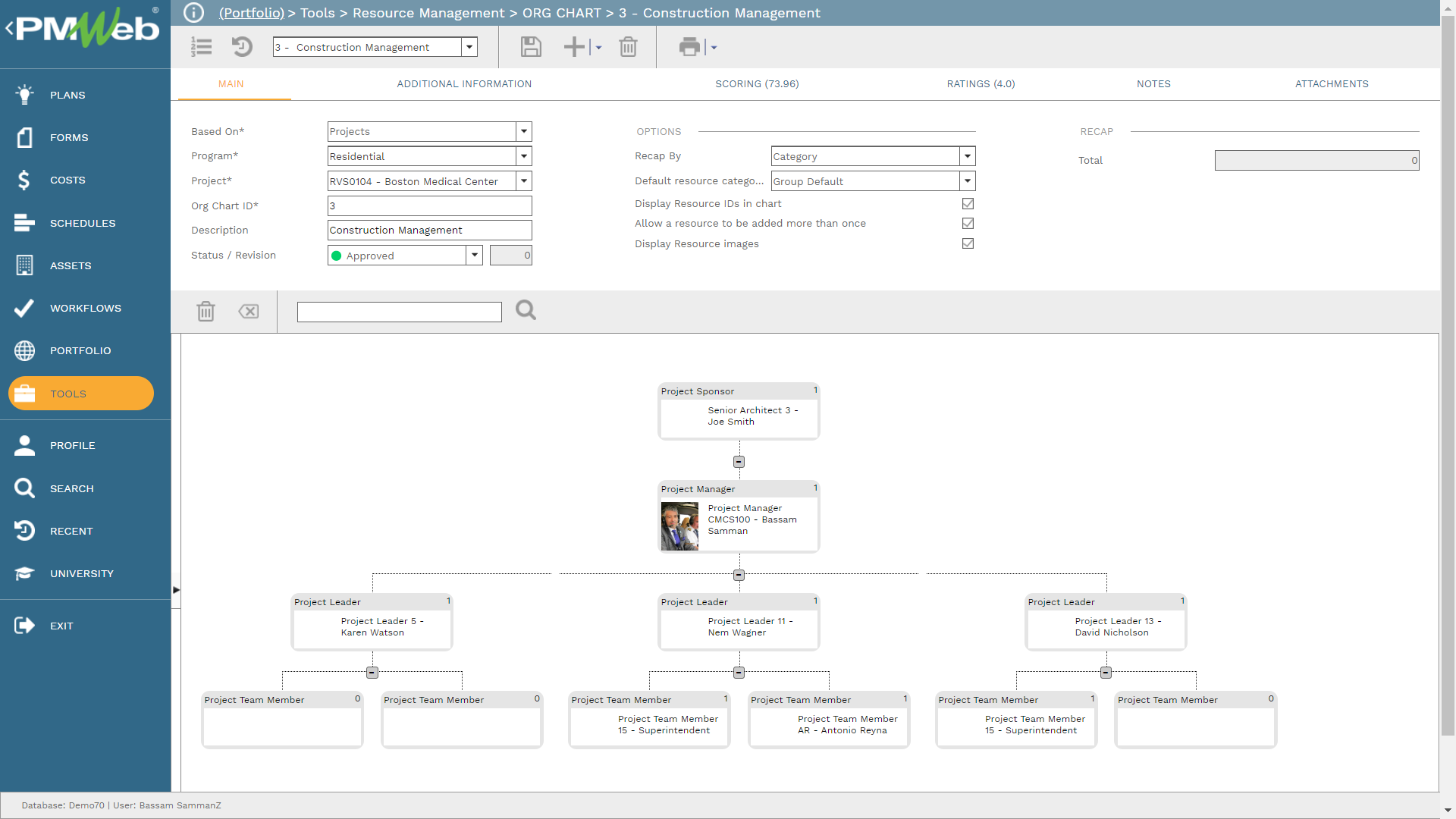 The integration of the WBS and OBS levels will become the basis for establishing the control accounts or work packages for the project. Those will be the management control points where the integration of scope, budget, actual cost, and schedule takes place, and where the measurement of performance will occur. Each control account or work package will be associated with a specific single organizational component in the organizational breakdown structure (OBS). In a construction project, there could be engineering (EWP), procurement (PWP), construction (CWP), and startup (SWP) work packages. The startup work packages (SWP) also sometimes named turnover work packages (TOP) will include the scope of work for testing and commissioning activities. 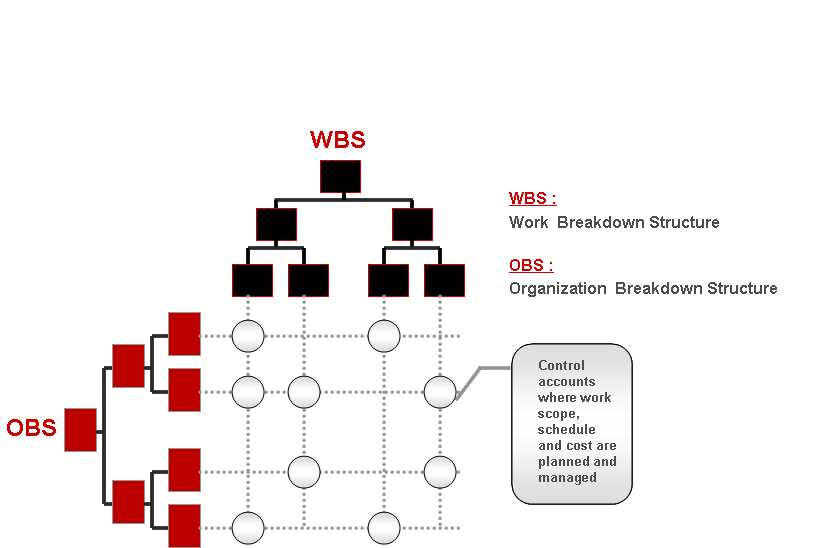 The scope of work (SoW) included under each type of work package will differ. For example, the Engineering Work Packages (EWP) will be broken down by the project systems such as structural, water supply, air conditioning, finishes, etc. On the other hand, Procurement Work Packages (PWP) will be broken down by the way material and equipment will be procured. The Construction Work Packages (CWP) will include the work that will be executed by the resource crews on the construction site.

The fourth breakdown structure is the Cost Breakdown Structure (CBS) also known as the Cost Accounts (CA) which are needed to manage, monitor, and evaluate the cost performance of a project. Each cost element in each cost management business process will be assigned the CBS level that it relates to. The CBS is usually driven by how the organization wants to report the project’s financial performance. For organizations that are using the same project control system (PCS) platform to manage their projects’ portfolio, the CBS will be usually common to all projects although this is not a must requirement. 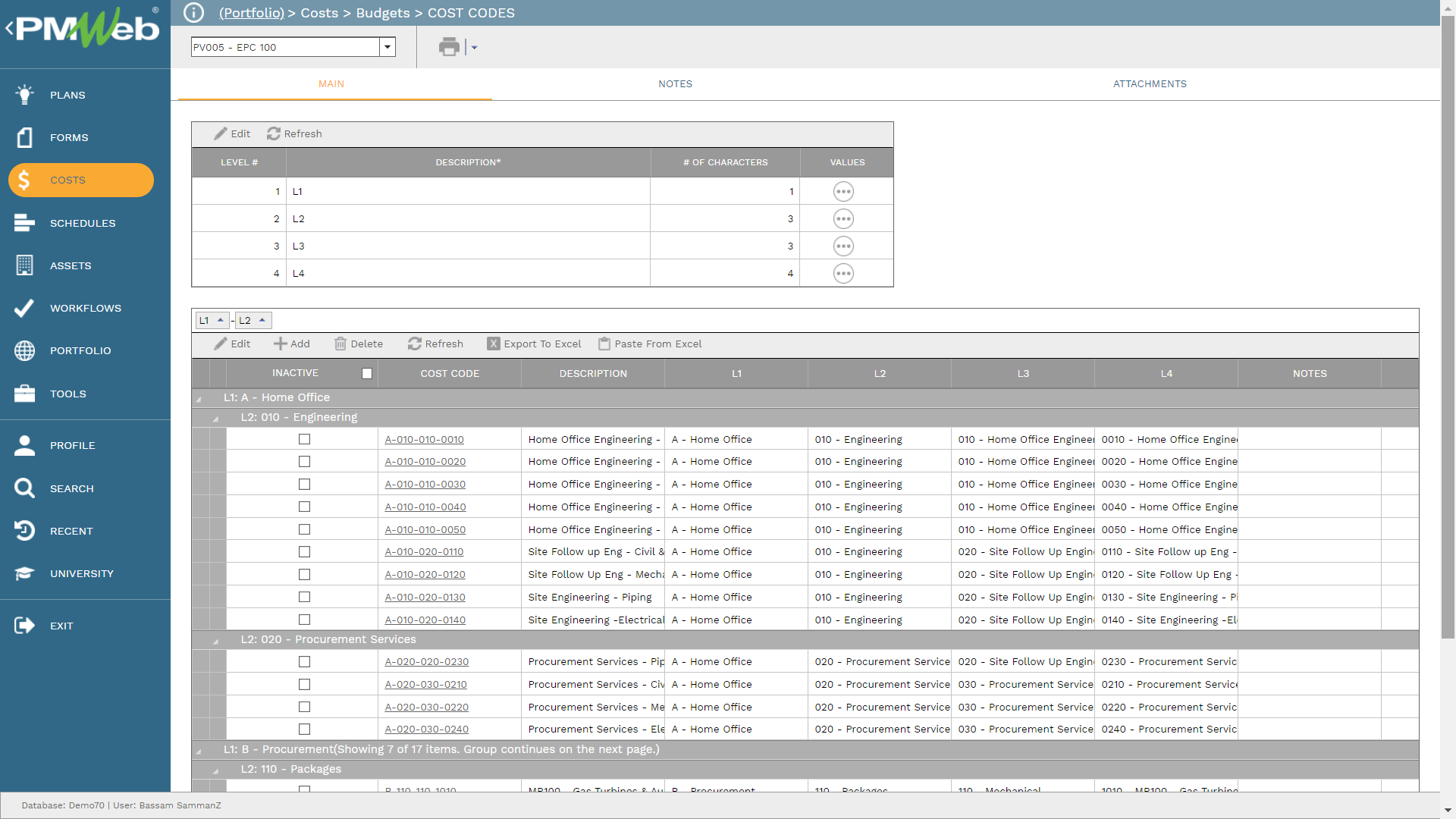 The fifth and last breakdown stricture is the Assets Breakdown Structure (ABS). The project’s assets are the spaces and equipment that the project will produce when it is handed over for operation. The ABS is crucial for the project’s testing and commissioning as well as the handover stages.

The Assets Breakdown Structure (ABS) is defined using the PMWeb assets register where each project will be first broken down into the buildings or zones that it consists of. The second level will be the floor levels of each building while the third level will be the spaces or areas of each floor level. The spaces which are the flats, office spaces, common areas, mechanical rooms, and others are considered one of the assets produced by a construction project.

The second type of asset is the equipment that could be located in one of the identified spaces, floor levels, or even the building. Those are usually permanently installed equipment for a project such as elevators, chillers, air handling units, generators, and others. Nevertheless, they could also temporary or moveable equipment if needed. 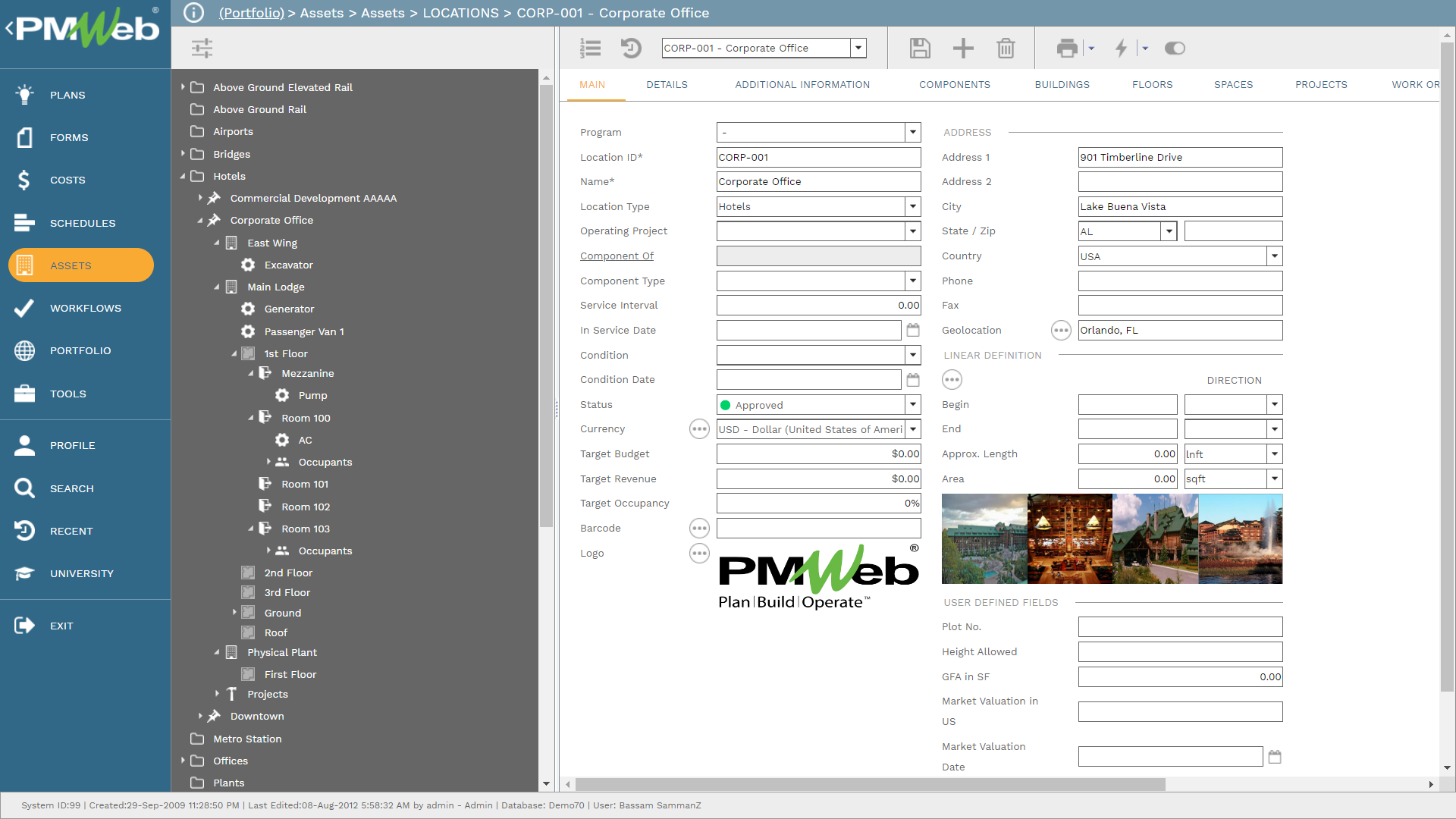