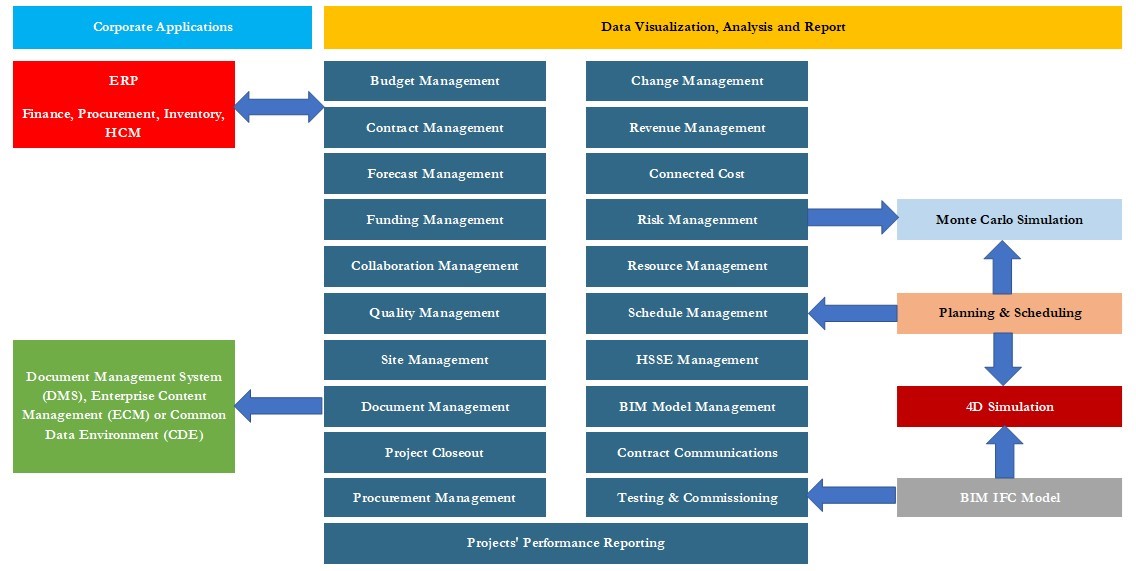 One of the key things that I have learned during my four decades of being involved in the delivery of construction projects is that never try to reinvent the wheel. The same could be said for setting up the Project Control System (PCS) which usually needs to be up and running in a matter of a few weeks.

As detailed earlier, a PCS should have modules for managing, monitoring, evaluating, and reporting the performance of project documents, schedule, and resources, budget and cost, risk, change, quality, health, safety, security, and environment (HSSE), procurement, claims, communications including interfaces, and progress narrative. Those modules should be integrated to provide a single version of the truth when it comes to monitoring, evaluating, analyzing, and reporting the construction project performance.

Using a Project Management Information System (PMIS) like PMWeb will address the requirements of all those modules. In addition, PMWeb comes ready with the option to link the schedules for either Primavera P6 or MS Project. In addition, the risk register created in PMWeb can be exported in MS Excel file format to enable using it in a Monte Carlo risk simulation software like Safran or the shelved Primavera Risk Analysis. Although PMWeb has a BIM model viewer, nevertheless, a customized integration will be created to extract and upload the needed BIM data needed for the PCS. The BIM model will be usually shared in an IFC (Industry Foundation Classes) file format. Using a 4D schedule simulation software like Synchro, the BIM model, and the Primavera P6 or MS Project schedules will be associated to create the 4D Schedule simulation.

In addition, some organizations might add applications that are used to verify the quality of the project schedule created in Primavera P6 or MS Project. An example of such an application is Acumen Fuse. Further, organizations that have strict requirements on running formal earned value analysis on their non-lump sum turnkey contracts, might also require adding dedicated EVM analysis applications like EcoSys or Prism G2.

Although PMWeb comes ready with its own Business Intelligence reporting tool, MS Power BI will be used to create interactive dashboards and reports using the data captured in all of the PCS applications. Finally, organizations that are using the PCS solution on their complete projects’ portfolio, those organizations might consider integrating the PMWeb solution with their home office ERP solution to manage cost and contract management data and Enterprise Document Management System (EDMS) to download project documents.

All of the applications listed above are commercially of-the-shelve available that can be purchased and implemented by the PCS team. In addition, most of those applications, and in particular the PMWeb Project Management Information System comes ready with more than 150 forms, reports, and dashboards required for project control systems. Those reports can be modified when needed as well as completely new forms and reports can be created when needed. For example, the contract management report provides a summary of all contracts awarded on all projects managed by the organization. For each contract, the report will provide a summary of the contract’s status and key information. In addition, the report will list the details of all approved change orders and interim payment certificates. 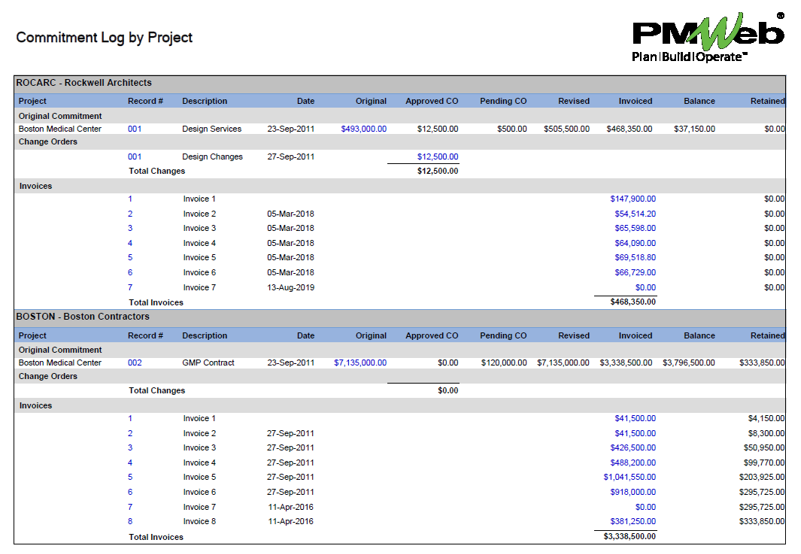 The PCS team needs also to decide on how the PCS applications will be hosted. Those could the option of being on-premise or SaaS (Software as a Service) subscription. For the on-premise option, the PCS team needs to decide if the data center hardware infrastructure will be purchased and set by the company or use the services of third-party data centers to either host the PCS applications as IaaS (Infrastructure as a Service) or PaaS (Platform as a Service). The decision of the PCS hosting options needs to comply with the regulations that an organization needs to comply with when it decides on where the PCS data will be hosted. 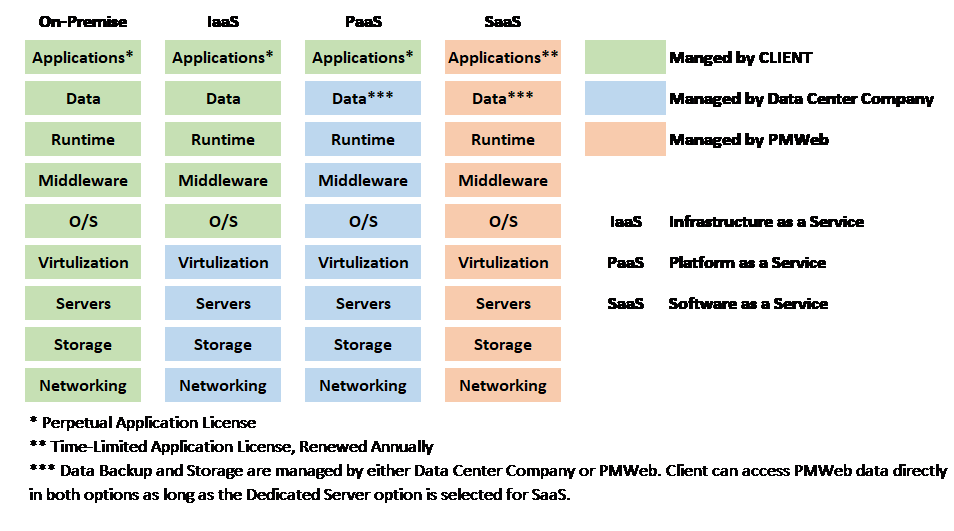 Since the number of users for the planning and scheduling, Monte Carlo simulation and 4D scheduling will be limited to the planning team, the main number of users will be for the PMIS application. The PMWeb application allows having three types of user licenses for which the pricing, as well as the privileges, will differ. Those are Full Named, Guest Named, and Guest Concurrent.

The Full Named license allows the users to create and manage all parts and aspects of the system especially allowing users to create records under cost management. Those could include for example the commercial team, procurement team, project controls team, dost managers, document controllers, planning managers, and PMWeb administrators. On the other hand, the Guest Named user license is exclusive licensure of rights assigned to a single named software user, they can view and access everything in the system with no limitation, but they can’t initiate or draft cost management and planning modules forms. The Guest Named users are involved in the approval process, for example, all top management team members could be assigned with Guest Named since they are mostly viewing the dashboard and approving the documents. For example, those would include site engineers, construction department team members, project team members, and the design or supervision team. Finally, the Guest Concurrent Users license is a type of license that is for those who need the Guest User License access but do not need to access it at all times. Those will be users who will be assigned a pool of user licenses to use.

The assigned PMWeb administrator who will be part of the PCS team will assign the user license type for each individual who needs to access PMWeb. The access rights and permissions for each one of those individuals will be determined depending on the role he/she has on the project and the needed PMWeb functionality to fulfill the role requirements. 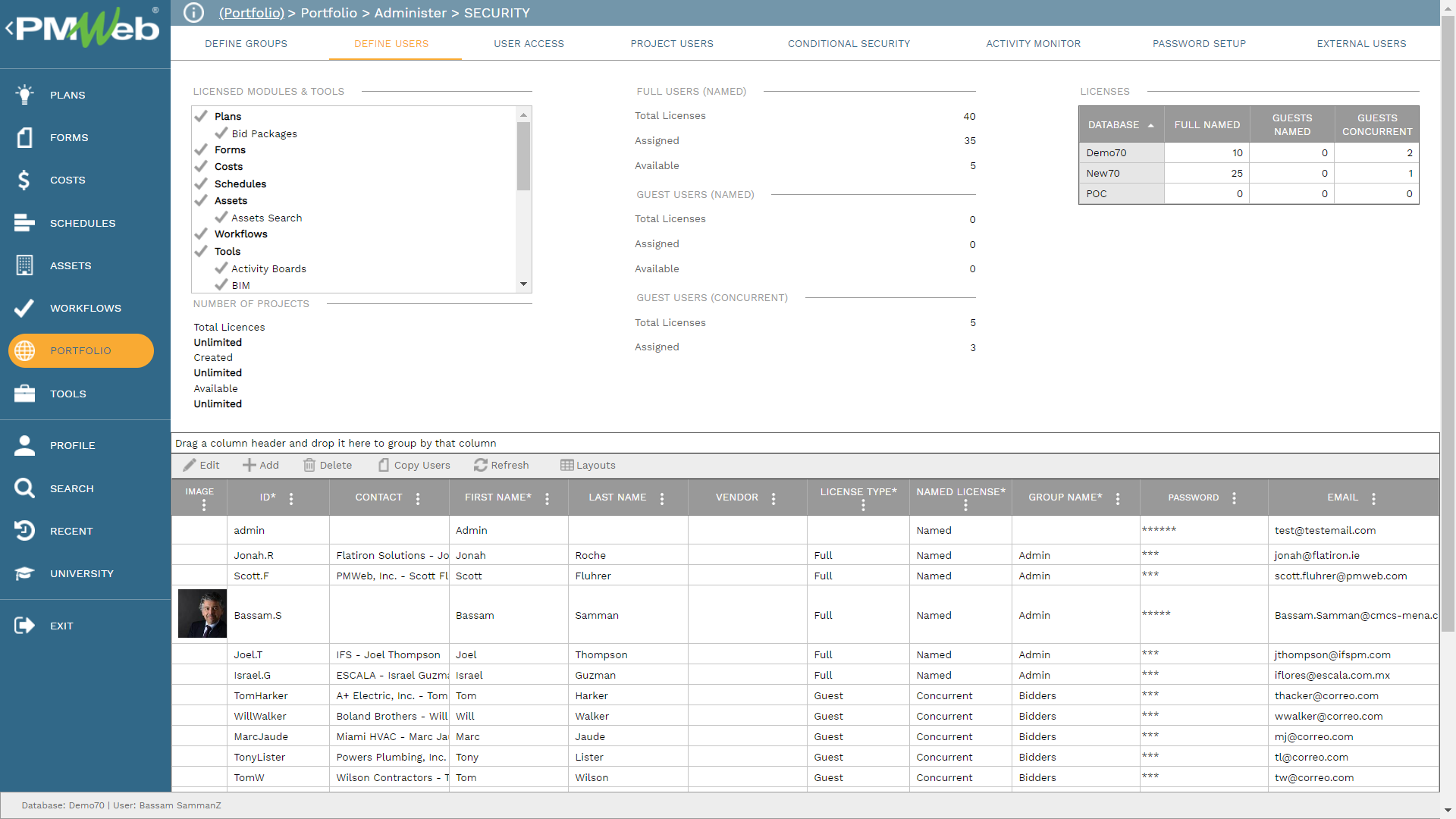 For the MS Power BI, the number of users will depend on the number of users who would need to have access to the created dashboards and reports, Unless the organization has an on-premise MS Power BI license, Microsoft offers an annual fee for the users who need to access those reports and dashboards. In addition, there will be the cost of the special visuals that need to be used with MS Power BI. For example, those would include the visual for the BIM model and bar chart or Gantt chart visuals. Other visuals for MS Power BI are available for free.