Dr. Rachad Baroudi, CEO of KPI Mega Library, has identified 185 key performance indicators (KPIs) that can be used by organizations to monitor, evaluate and report their projects’ performance with the majority of those KPIs that can be applied to capital project delivery. The project management KPIs are grouped into six categories, Project Administration, Project Compliance, Project Control, Project Cost and Budget, Project Statistics, and Value Management. The complete list of those KPIs is available by contracting KPI Mega Library on info@kpimegalibrary.com.

To calculate the values of those KPIs, the organization needs first to determine the information needed for each KPI and the required formula to calculate those KPIs. For example, for the KPI “# of projects on budget”, the organization needs to have a register of all projects for which the approved budget needs to be identified as well as the estimated cost at completion. Those two values will become the basis for calculating the variance between the budget and the estimated cost at completion. Those projects that will have zero or positive variance value will be the projects that are on a budget which is the required KPI. The same approach will be followed with all other project cost and budget KPIs. 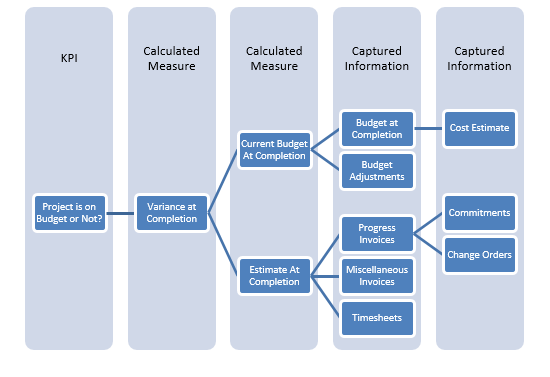 Nevertheless, the challenge is not in calculating the “# of projects on budget” KPI or any other KPI but in ensuring that the provided information is correct, current, verifiable, auditable, and traceable. Using MS Excel to record this information or any other platform to input those values without following a documented process will just raise more concerns about the accuracy and validity of the reported KPI. Therefore, unless the information required for those KPIs is extracted directly from the data source where the different project management processes are managed, those KPIs could end up being more harmful than helpful to the organization when it comes to monitoring, evaluating, and reporting the projects’ performance.

Using Project Management Information Systems (PMIS) like PMWeb, organizations can address this challenge by streamlining the extraction of the needed information. PMWeb allows the organization to automate the hundreds of project management processes that need to be managed across the complete project life cycle stages across the organization’s complete projects portfolio. This will ensure that all reported real-time information is trustworthy, auditable, and traceable as well as provided by the project team member who is accountable for the shared information.

PMWeb comes ready with most of the input forms needed for the different project management processes as well as PMWeb Form Builder allows the creation of the input forms needed for any other additional processes. For example, for the “# of projects on budget” KPI, the organization needs first to capture all projects that they need the KPI to report on. Accordingly, PMWeb Project Module will be used to capture the details of all those projects. 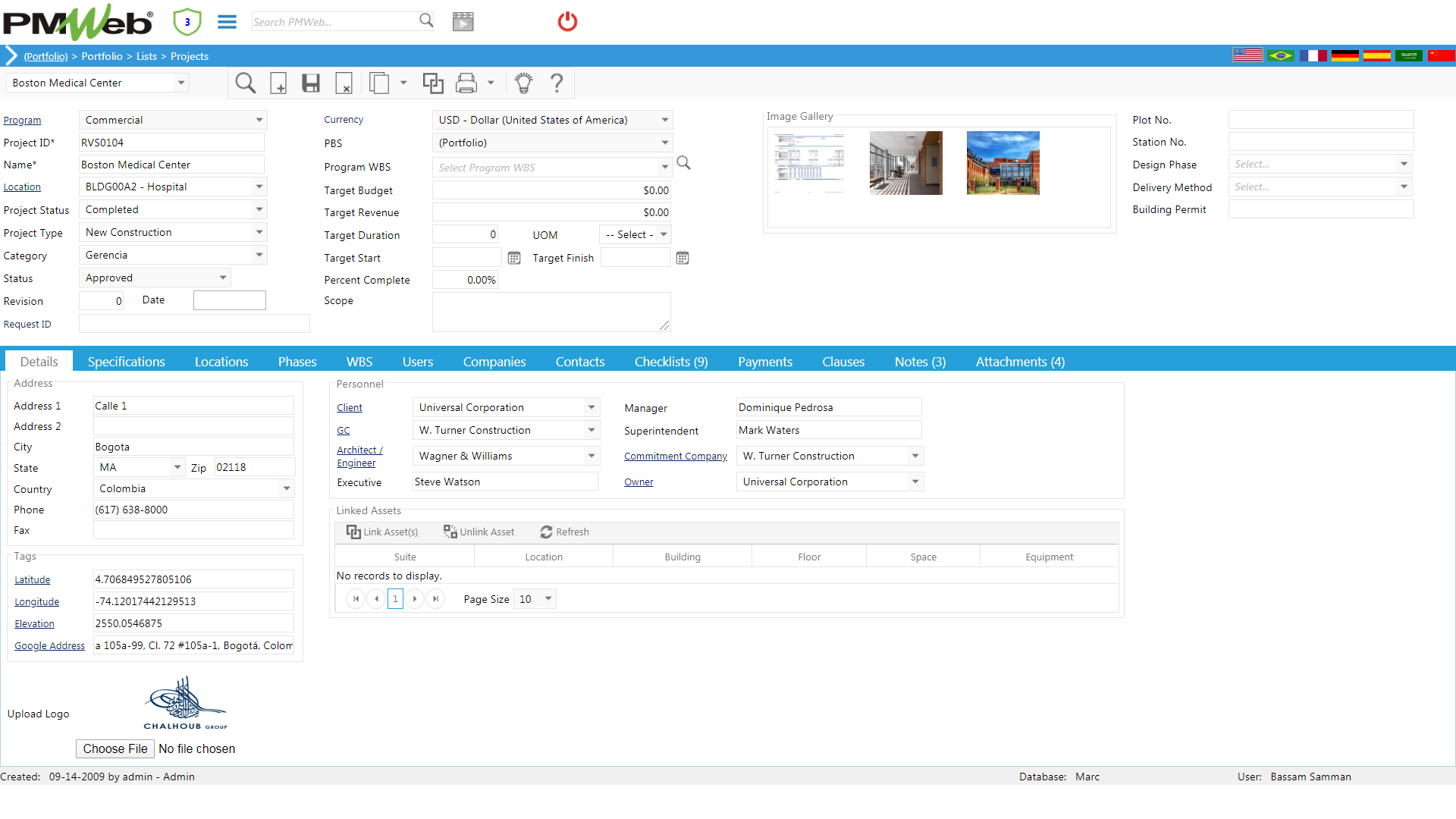 The next needed information is the approved project budget. Although the PMWeb Project module has a field for the project budget, nevertheless, this is not good enough for an organization that is looking for credible and justified information to be reported on. Accordingly, the PMWeb Budget module will be used to capture the project budget and the details of the budget spending projection if needed. The project budget can be captured at the desired level of detail which is usually defined in the cost breakdown structure (CBS). 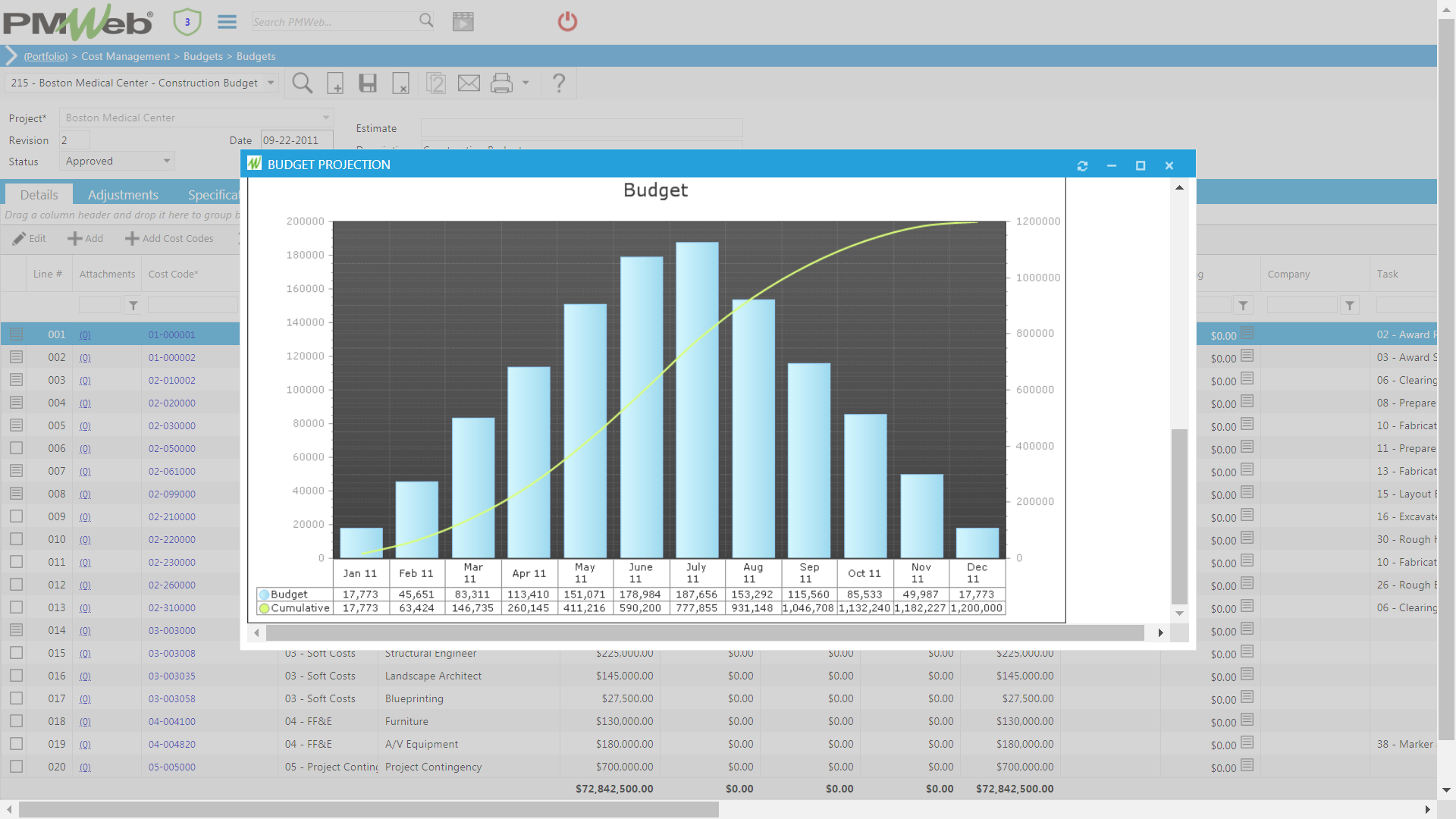 Similar to other PMWeb modules, the attachment tab will be used to attach all supportive documents used in creating the project budget. It is highly recommended that all supportive documents are uploaded and stored in the PMWeb document management repository under a folder that will be titled Project Budget. In addition, links to other PMWeb records like meeting minutes among others as well as imported MS Outlook emails be linked to the project budget form.

To ensure the formal review and approval of the project budget, a workflow will be assigned to the budget form. This will enforce the needed accountability in submitting, reviewing, and approving the project baseline budget. 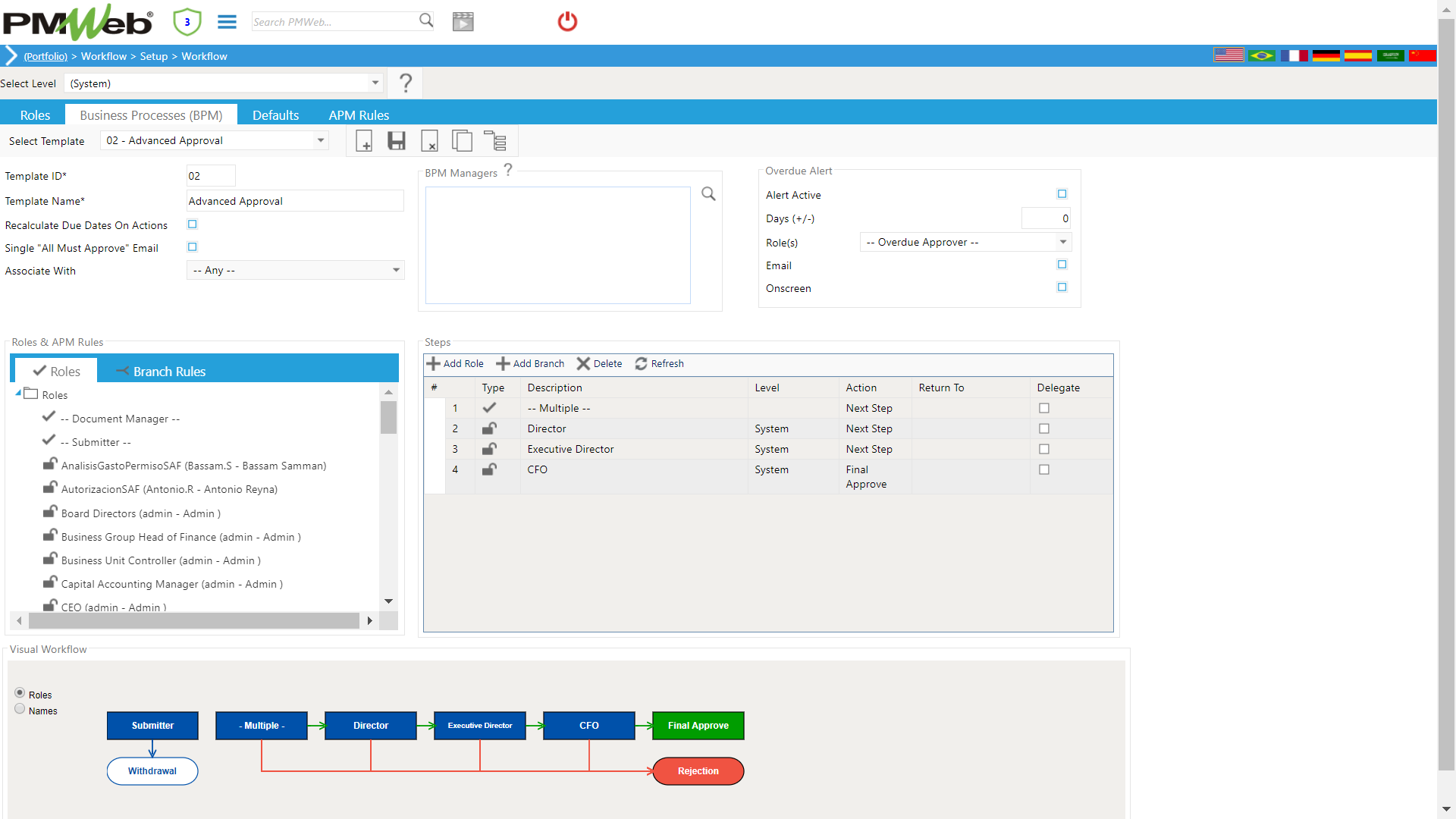 Since the approved baseline budget could be subject to changes due to the revised project scope of work or other factors, the PMWeb Budget Request module will be used to capture the details of all those budget adjustments as well as any internal budget transfers.

Similar to the budget form, supportive documents can be attached as well as a workflow can be assigned to enforce formal review and approval of each adjustment as well as incorporate the approval authority levels for those adjustments.

To calculate the actual cost incurred to date as well as other anticipated cost expenses, the PMWeb Commitment module will be used to capture the details of all contracts, subcontracts, and purchase orders that will be issued on the project to procure the different scopes of services to build the project. Similar to all other PMWeb forms, supportive documents can be attached as well as a workflow can be assigned to enforce formal review and approval of the process as well as incorporate the approval authority levels when needed. 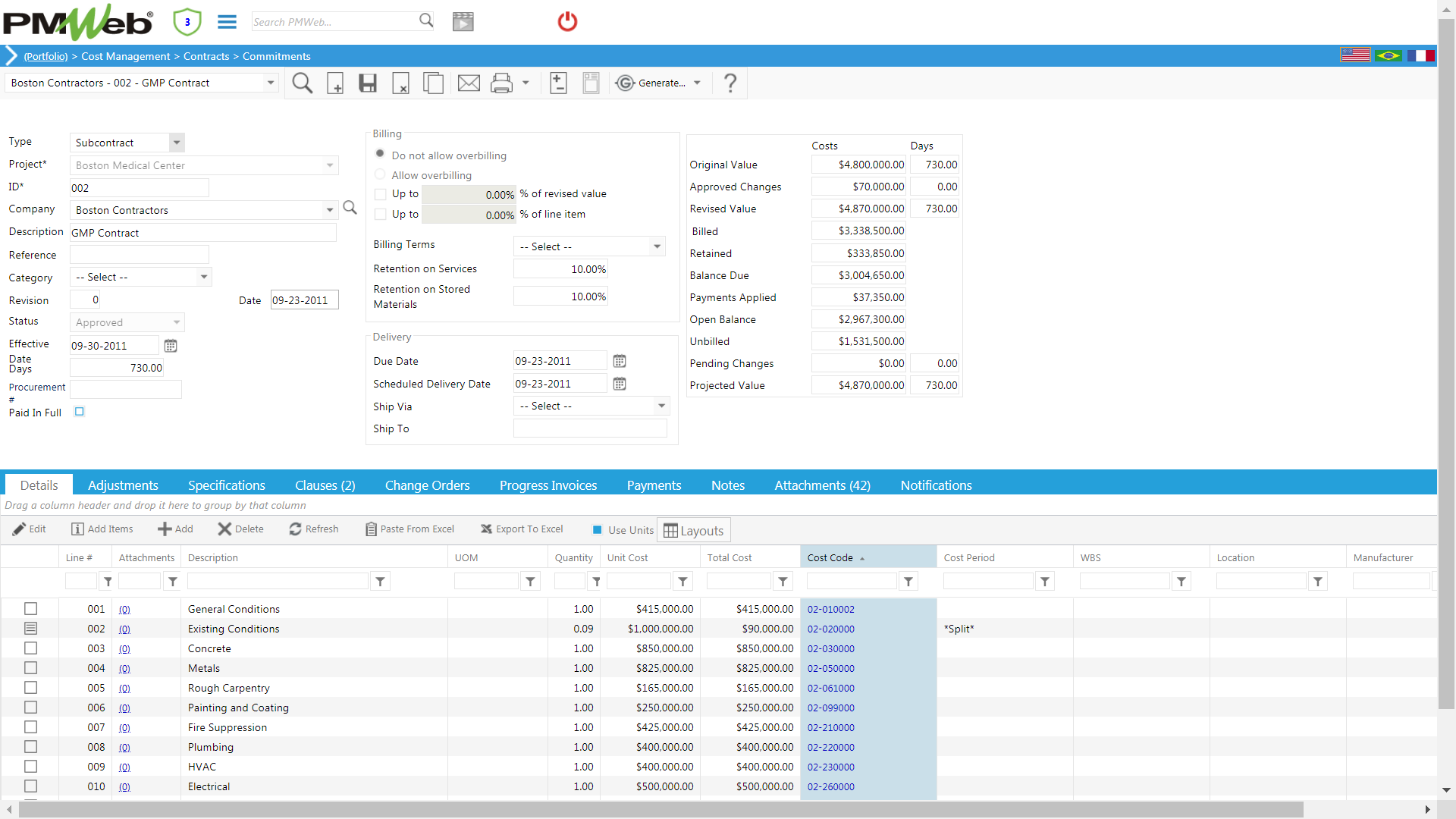 For each commitment agreement, potential, pending, approved and disputed change orders will be captured to ensure that the estimated cost of each commitment is current and reflects the true status of the project.

The actual cost incurred against each commitment agreement will be captured on monthly basis using the progress invoice module. The percent complete for each bill of quantity line item can be added manually or imported from the updated project schedule if the bill of quantity line items is linked to the project schedule activities. Similar to all other PMWeb forms, supportive documents can be attached as well as a workflow can be assigned to enforce formal review and approval of the process as well as incorporate the approval authority levels when needed. 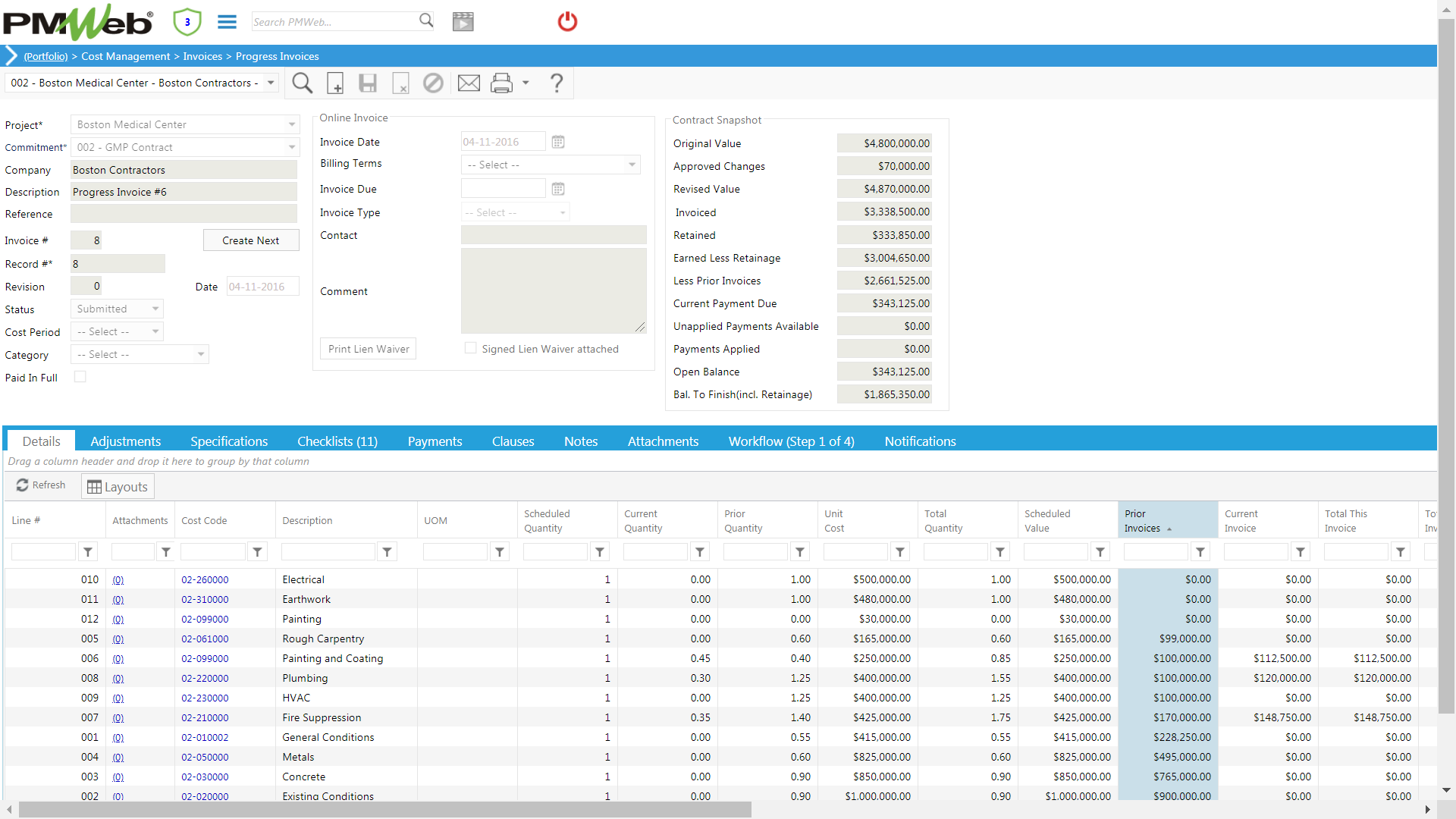 The actual cost incurred on the project could also result from other non-commitment-related expenses. For those actual cost records, the PMWeb Miscellaneous Invoices module will be used.

In case there is an actual cost associated with the project management resources and other resources that are not covered by the commitments agreements or miscellaneous invoices, the PMWeb Timesheet module will be used to capture the actual cost associated with labor and equipment resources. The PMWeb Timesheet module allows capturing different rates for reported hours if they were regular, overtime, weekend, or any other type of pay.

PMWeb Cost Worksheet module provides a central location to consolidate and report on the captured cost data which will be stored in the PMWeb Cost Ledger module. The cost worksheet which can be summarized at a project level or any other cost breakdown structure level will detail the baseline budget, approved adjustments, revised budget, original commitments, approved changes, revised commitments, pending changes, projected commitment, commitment actual cost, non-commitment actual cost, total actual cost, commitment cost estimate to complete, cost estimate at completion and variance at completion. The variance at completion (VAC) will be the basis for determining if the project is on budget or not. 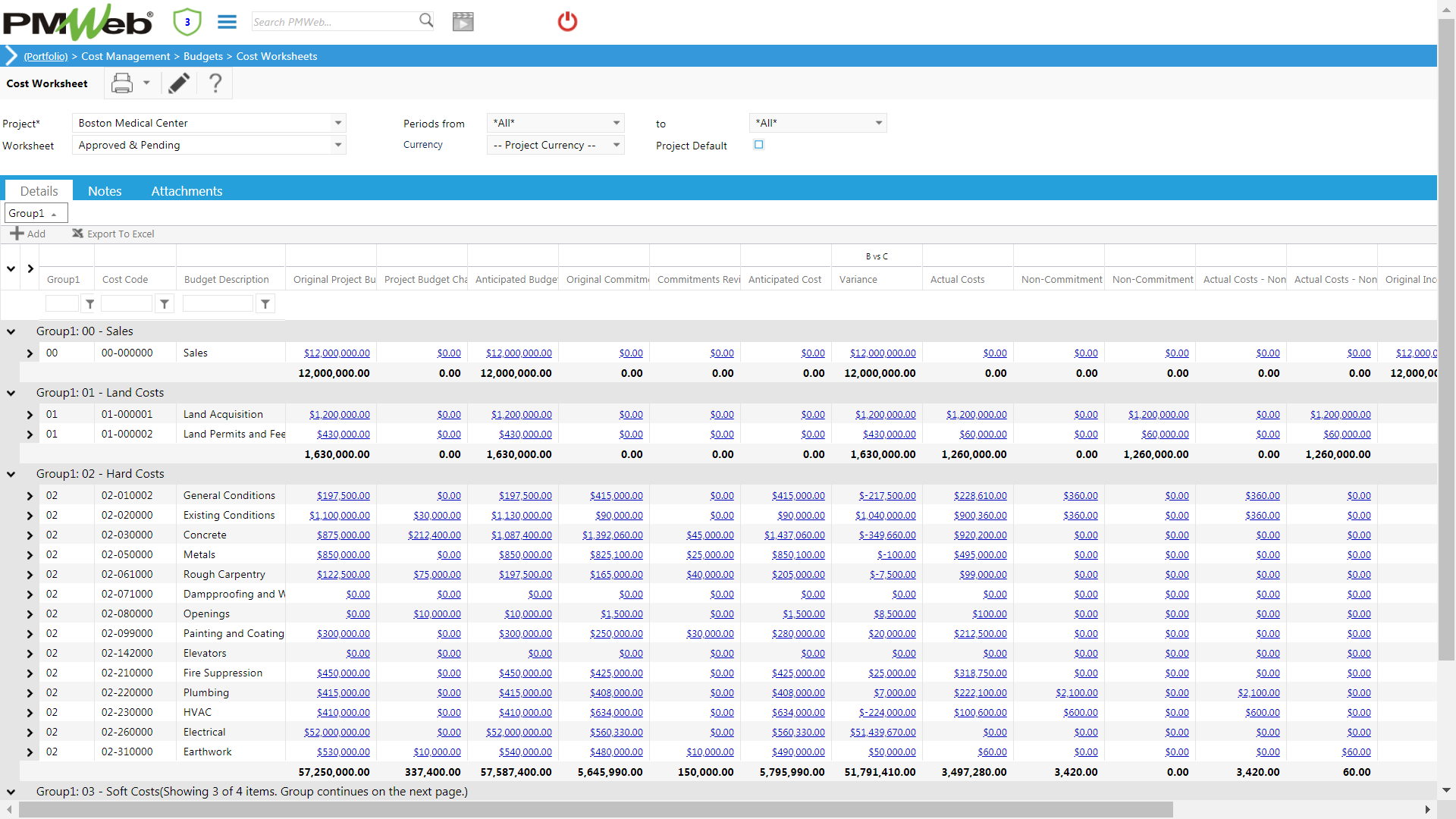 Using PMWeb report writer, a report can be created to summarize the cost worksheet information across the organization’s complete projects’ portfolio. The report will display the “# of projects on budget” KPI as well as the summary cost measurements of each project. Those would include “Budget at Completion (BAC)”, “Planned Value (PV)”, “Earned Value (EV)”, “Actual Cost (AC)”, “and Estimate to Complete (ETC) ”,“ Estimate at Completion (EAC) ”,“ Schedule Variance (SV) ”,“ Cost Variance (CV) ”,“ Schedule Performance Index (SPI) ”,“ Cost Performance Index (CPI)” and “Variance at Completion (VAC)”. This captured cost information can be grouped by project category, type, and program it relates to among many others.

The information captured in the above PMWeb modules will be also used to report on many other KPIs. Those could include “Average amount of overspending on project budget”, “% project budget variance”, “% projects on budget”, “# of changes to the cost baseline”, “% of projects with scope changes”, “Average budget size of projects”, “Average deviation of the planned budget of projects”, “% of the accuracy of the cost estimate”, “Average annual project expenditures”, “Project cost predictability”, “Sum of costs of “killed” projects”, “Total deviation of the planned budget of projects” among others. 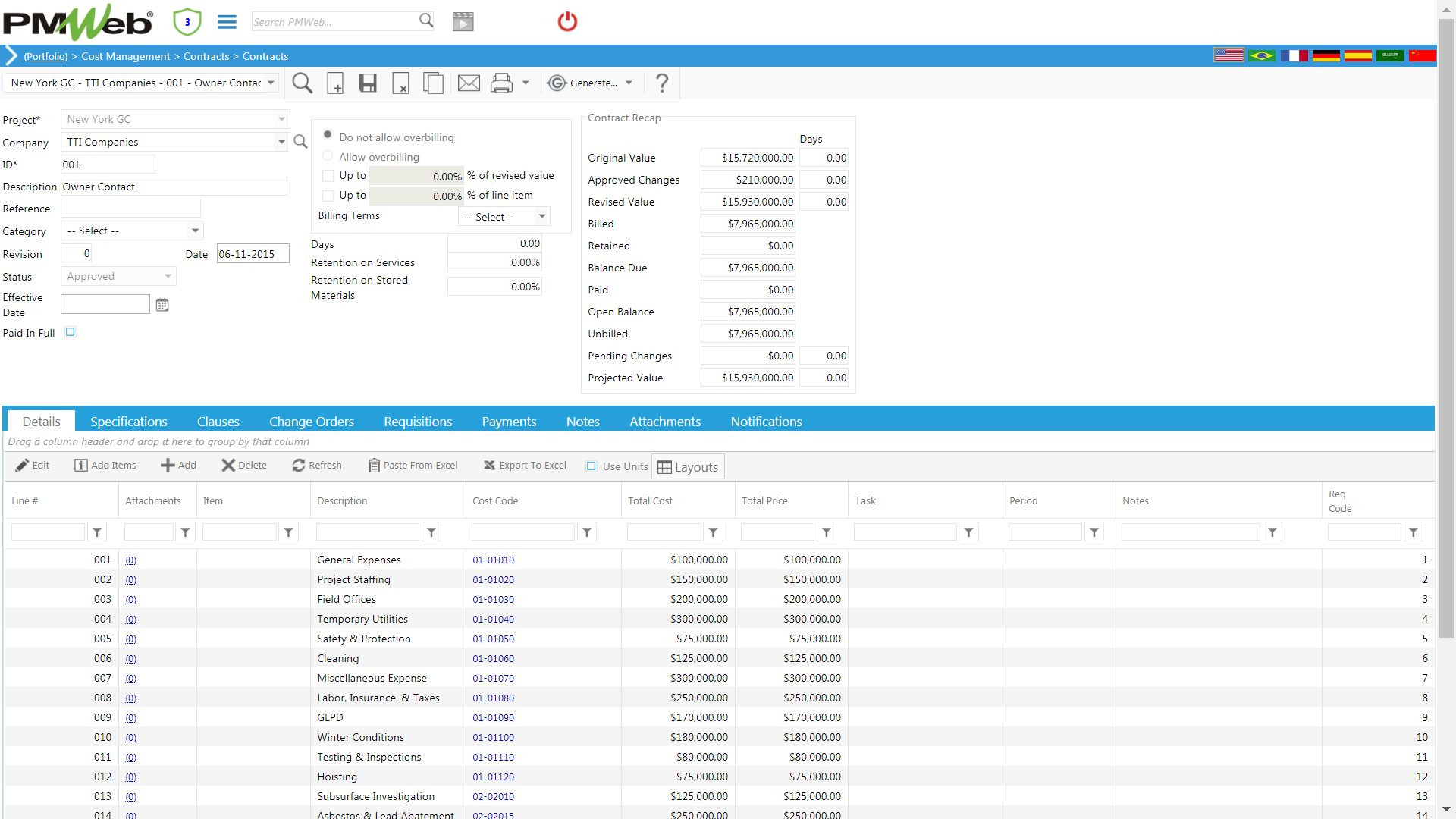