Article #517 How Can Project Owners have a Real-Time Monitoring, Evaluation, and Reporting of Scope Creep Alert on their Capital Construction Projects? 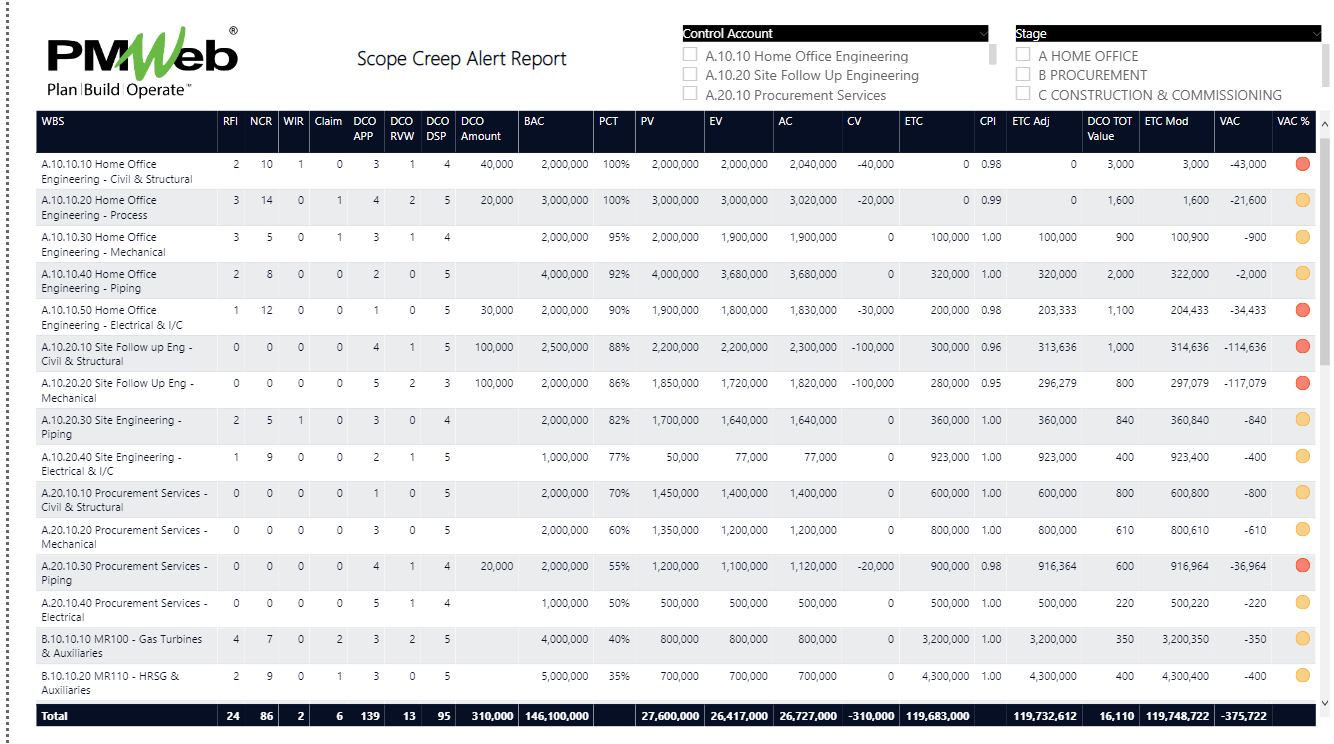 Although many causes lead to scope creep as well as there are many different possible response actions to mitigate their occurrence likelihood, nevertheless, what all capital project owners are keen to have is a single version of the truth on the impact of scope creep on the project’s estimated cost at completion. Project owners need to monitor, evaluate and report on what could be the estimated cost to complete the project’s scope of work due to those destructive changes or scope creep.

The earned value method (EVM) provides a perfect solution for this single version of the truth monitoring, evaluating, and reporting on the impact of scope creep on capital construction projects. The EVM provides capital project owners with complete visibility on how scope creep or destructive change orders have impacted the project’s budget to date and what will be the impact on the estimated completion cost if the current scope creeps trend continues to occur for the remaining project duration. This modified earned value method will use several EVM values to calculate the needed measures. The first of those is the Actual Cost that will be based on the amount invoiced for approved work in place plus the amount invoiced against approved destructive change orders. The actual cost of constructive change orders will be reflected in the project’s revised budget (BAC). The calculated actual cost (AC) when compared to the earned value (EV) based on the approved budget will provide the Cost Performance Index (CPI) which will be used to adjust the Estimated to Complete (ETC) to reflect elapsed periods performance trend. This adjusted ETC will be further modified to include the project owner’s expected cost exposure of claims, destructive change orders whether they are under review or dispute. The modified ETC will be added to the Actual Cost (AC) to provide the Estimate at Completion (EAC). This will become the basis for determining the anticipated Variance at Completion (VAC) for which the VAC Percentage value will be calculated by dividing the VAC value by BAC value.

To achieve this single version of the truth monitoring, evaluating, and reporting, a Project Management Information System (PMIS) like PMWeb needs to be used. PMWeb will be used to capture the project budget, budget spending plan, budget adjustments, earned value of approved progress, the actual cost for approved work in place as well as for payments made against destructive change orders and estimated cost of destructive change orders that have been identified as having likelihood to occur and those that have already occurred but either they are still under review or dispute. The first step is to decide on the level of scope creep control to be implemented on the project. This usually will be aligned with the project’s cost breakdown structure (CBS) levels for which PMWeb allows having up to 16 levels of details. 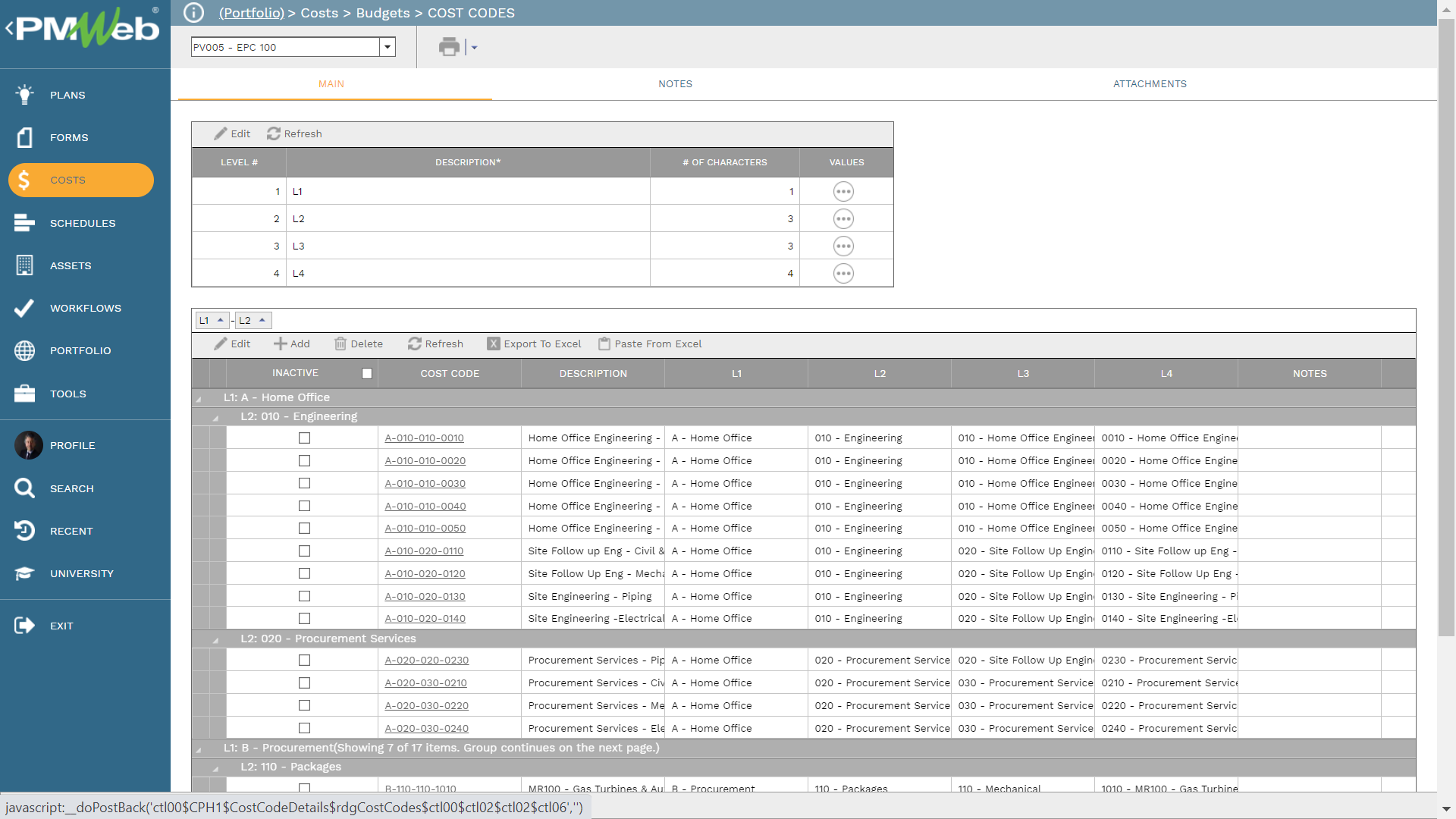 The second step would be to capture the project’s baseline budget, or Budget at Completion (BAC), which will be detailed to the defined CBS levels. The BAC value spending plan or Planned Value (PV) for each cost breakdown structure will be projected over its planned duration. The start and finish of this duration will be per the baseline schedule activity associated with the CBS level. Different projection curves are available to be used. 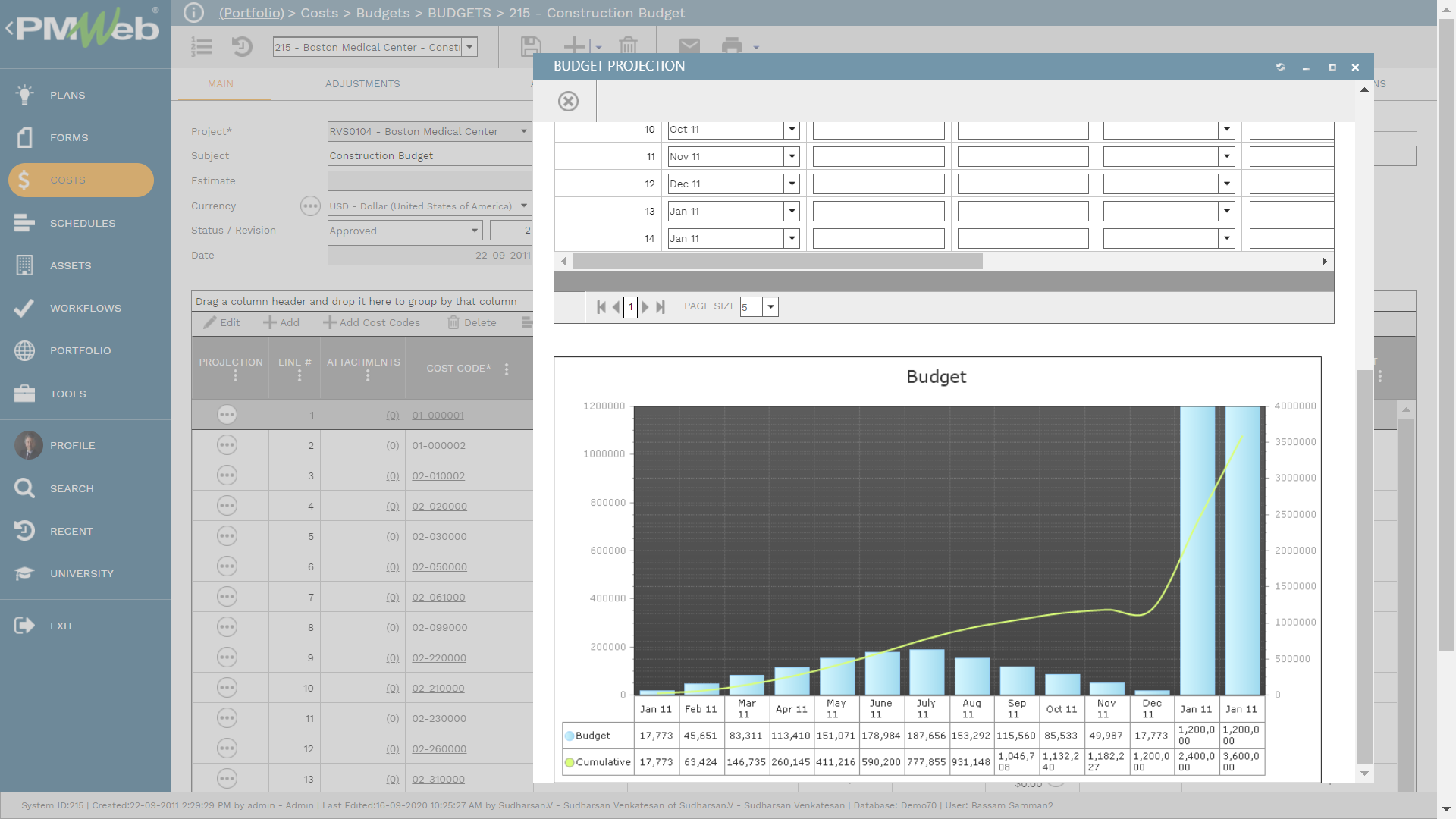 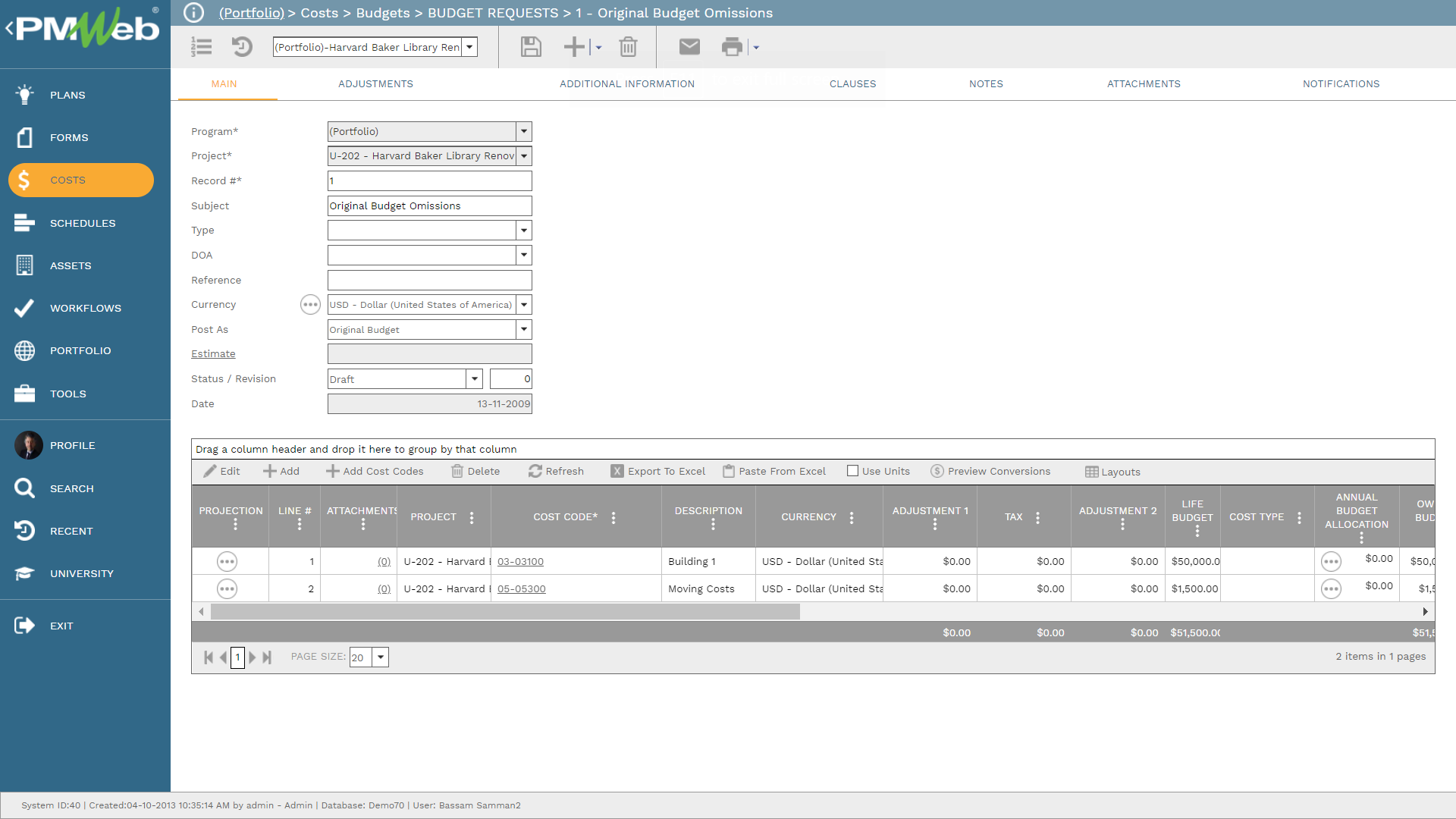 As the project progresses and at the end of each progress period, the approved current project schedule will be used to capture the percent complete values for activities that were associated with the project’s budget (BAC). This will be the basis for calculating the achieved Earned Value (EV) for each CBS level. Although the variance between EV and PV, that is Schedule Variance (SV) indicates the schedule performance index (SPI) of each CBS level, nevertheless, this will not be used in the scope creep alert report. Of course, this can be used in case the project owner believes it has relevance to the issued destructive change orders. 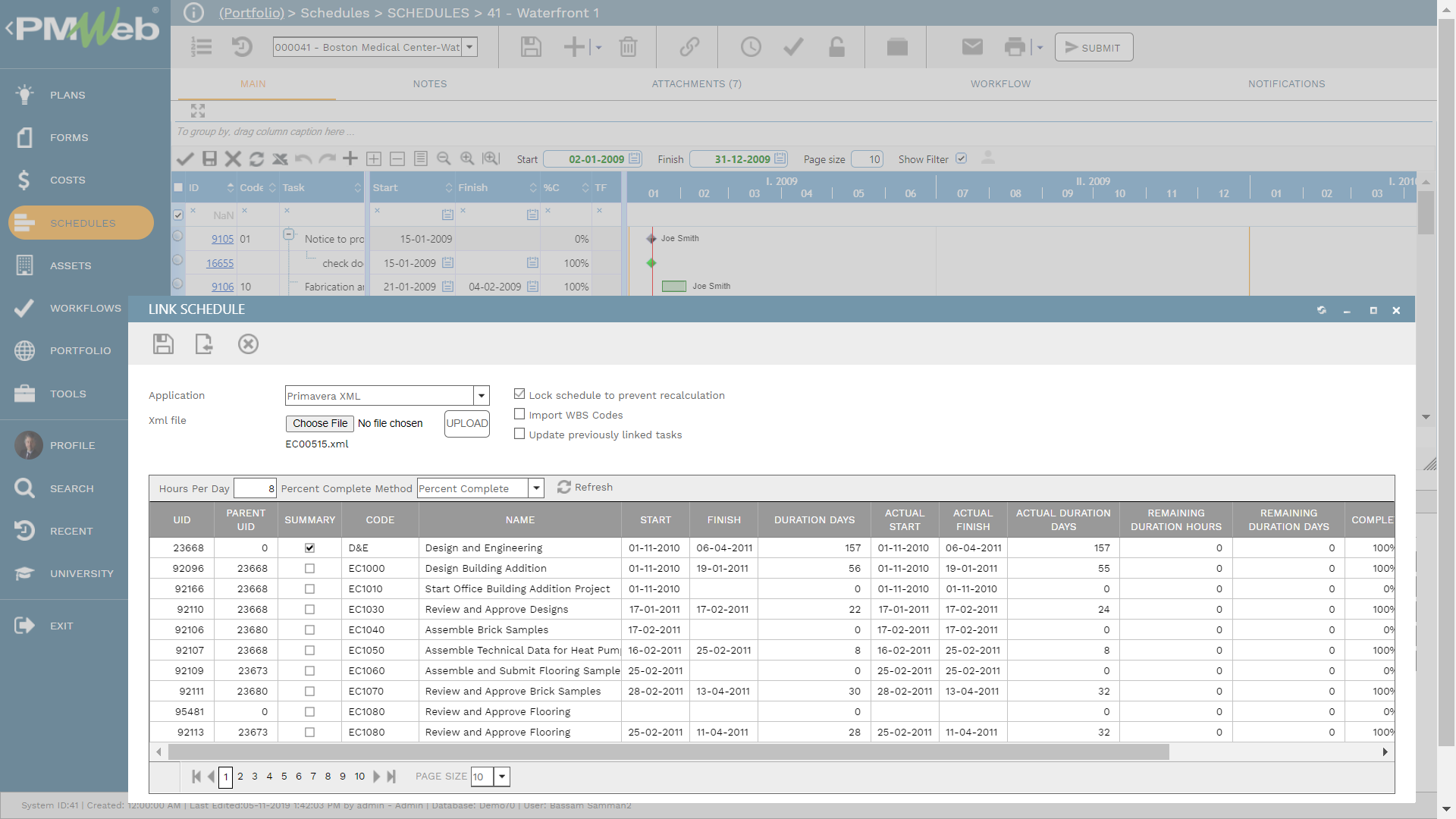 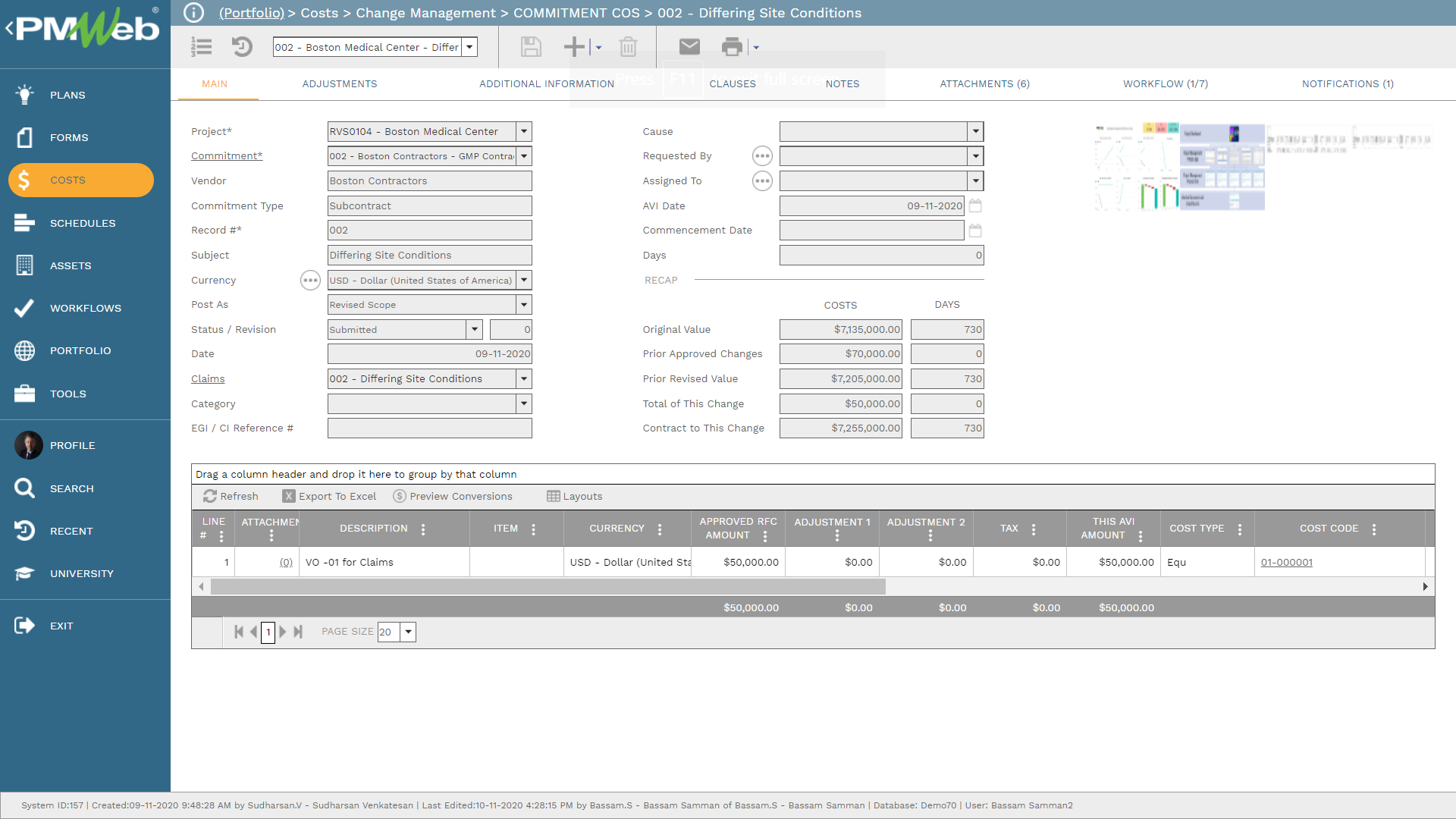 The Actual Cost for each CBS will be captured from the interim payment certificate which will be submitted by the contractor for the approved work in place as well as for completed work against the destructive change orders. In addition, miscellaneous invoices and other sources could be used to capture all types of commitment and non-commitment costs that could impact the actual cost value of each CBS level. 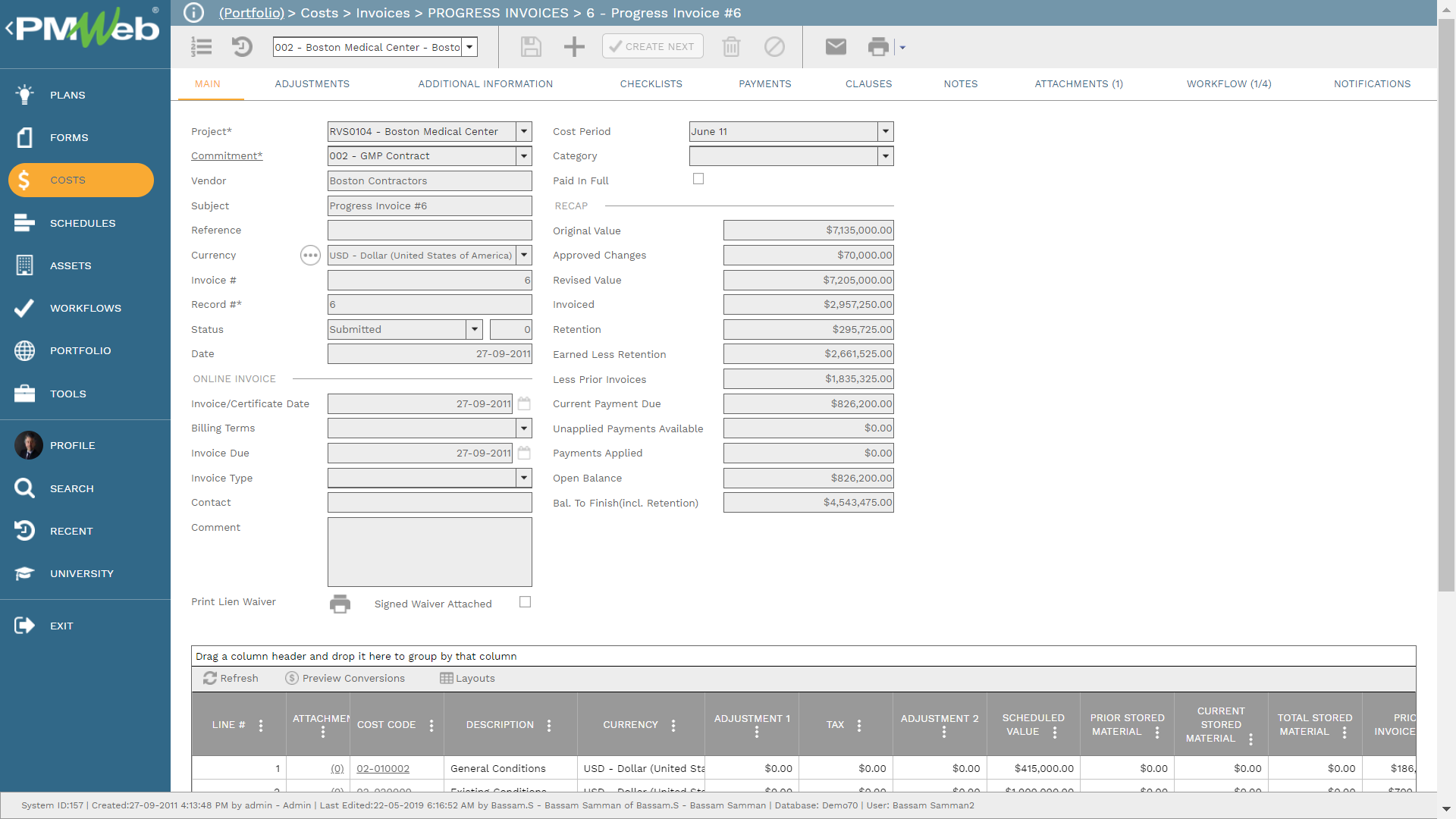 In addition, each CBS level will detail the number of Request for Information (RFI), Non-Compliance Report (NCR), Work Inspection Request (WIR) that were not approved from the first submission and claims or potential change orders submitted for the scope of work associated with the CBS level. This information is very critical when trying to understand the events that could have resulted in scope creep at a CBS level. For example, RFIs could be an indication of ambiguous contract documents, incomplete or wrong design, contractor’s actions to cause change, unforeseen site conditions among others. PMWeb RFI module will be used to capture those details. 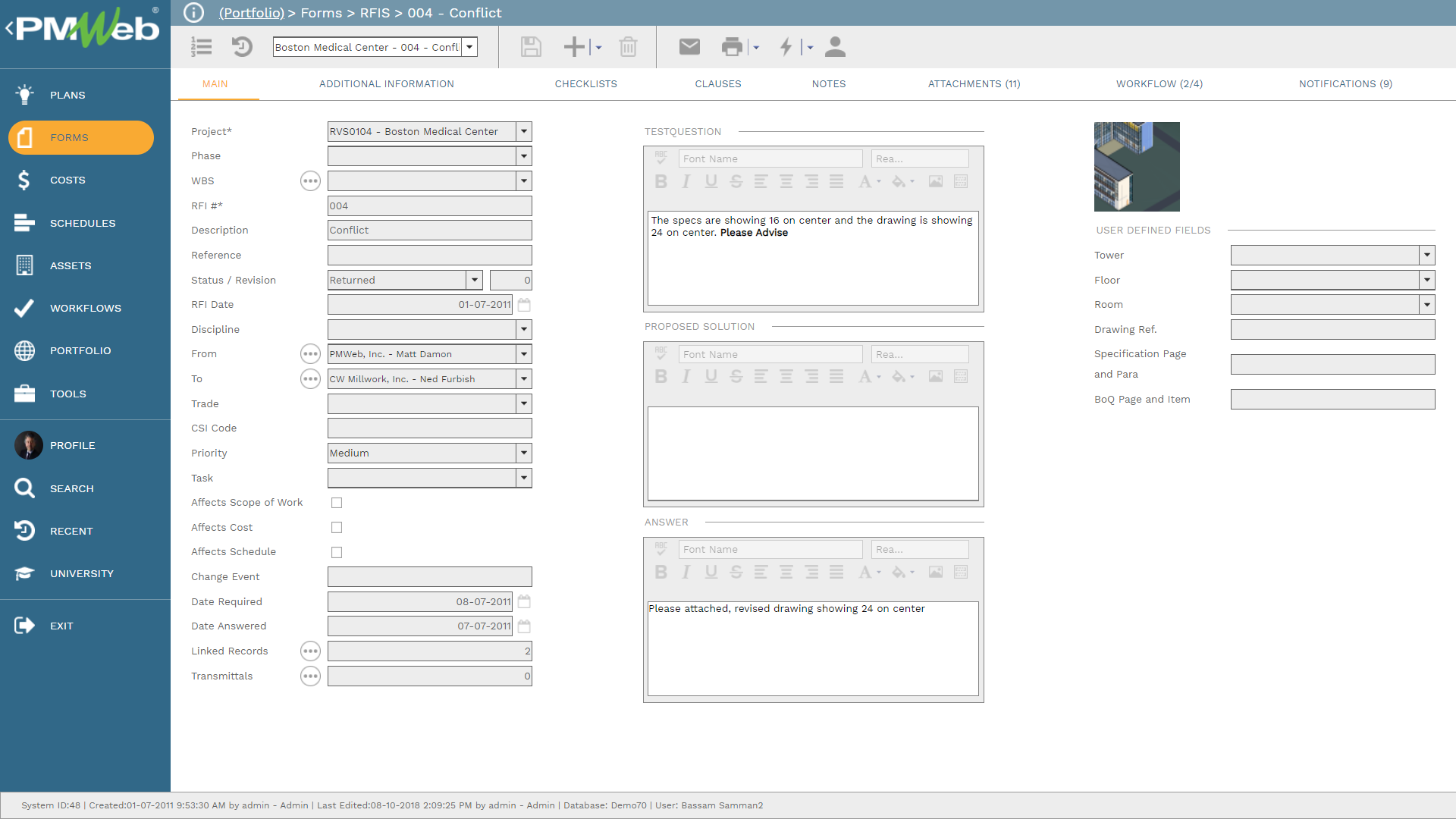 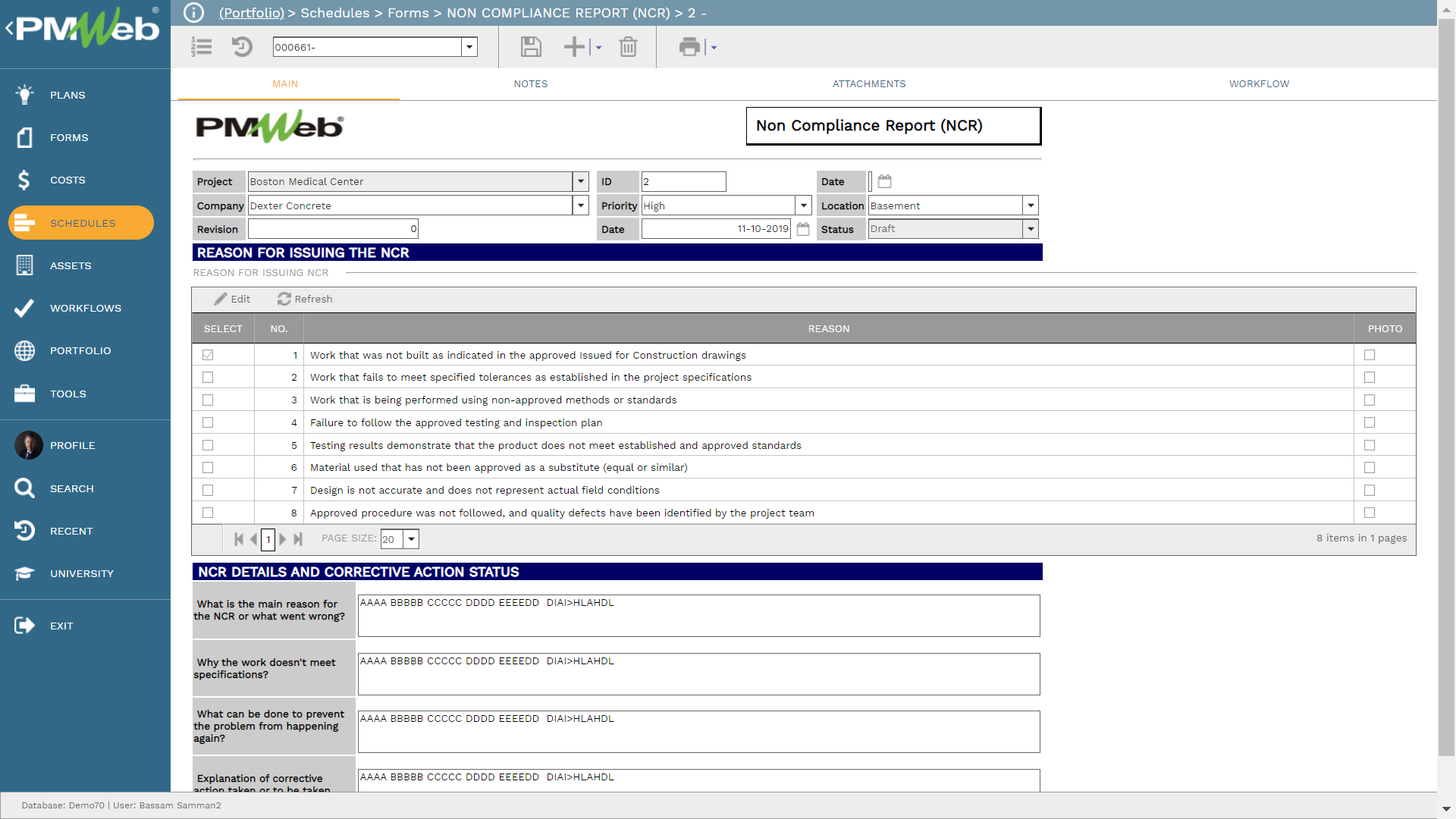 The difference between the BAC and EAC will be the Variance at Completion (VAC) which when divided by the BAC value, the VAC % value will be determined. The VAC % will be used as the Creep Alert where zero or positive value will be what is preferred or “Green”, negative variance to up 1% “Yellow” and more than 1% is “Red”. Of course, those thresholds depend on each project owner’s tolerance for scope creep. 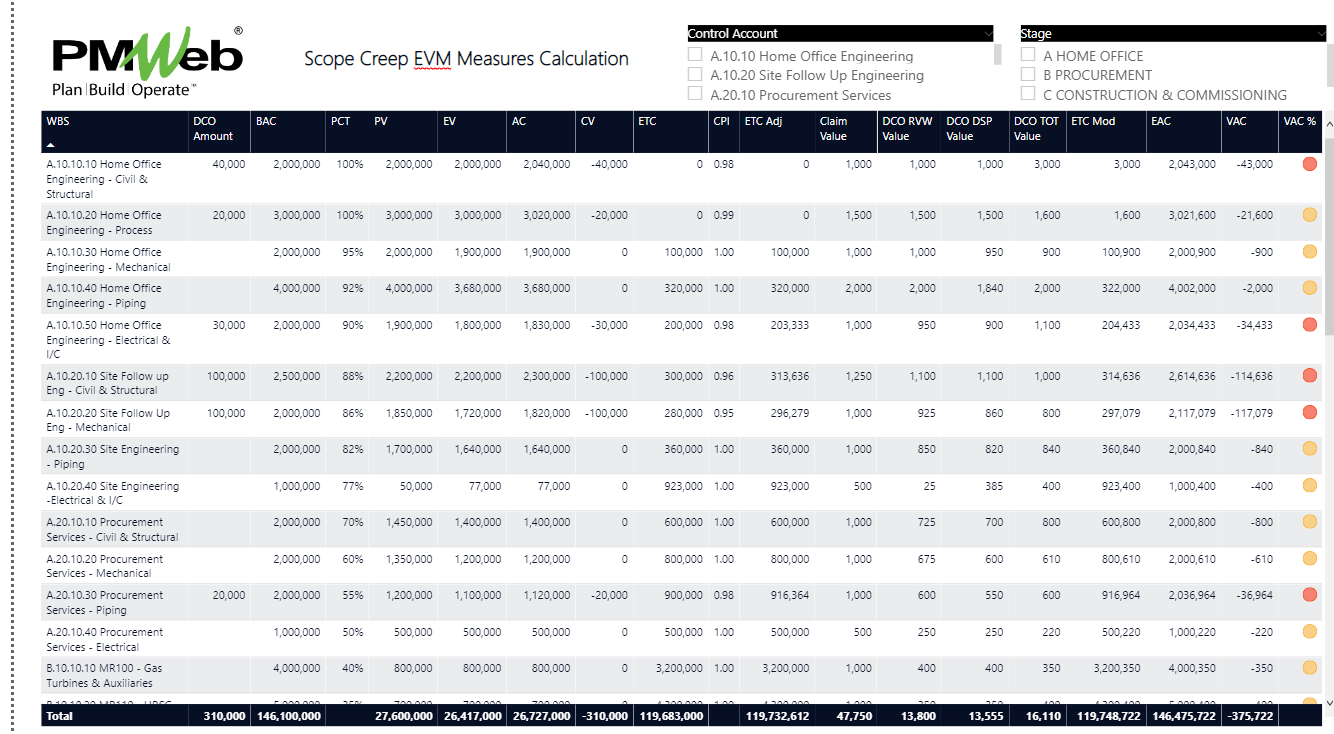