Article #509 Using Technology to Enable a 360-Solution to Manage, Monitor, Evaluate and Report the Performance of Retail Brands Expansion and Remodeling Programs and Projects – Step 2: Ensure that you have a Single Version of the Truth Visibility of Your Projects’ Financial Performance 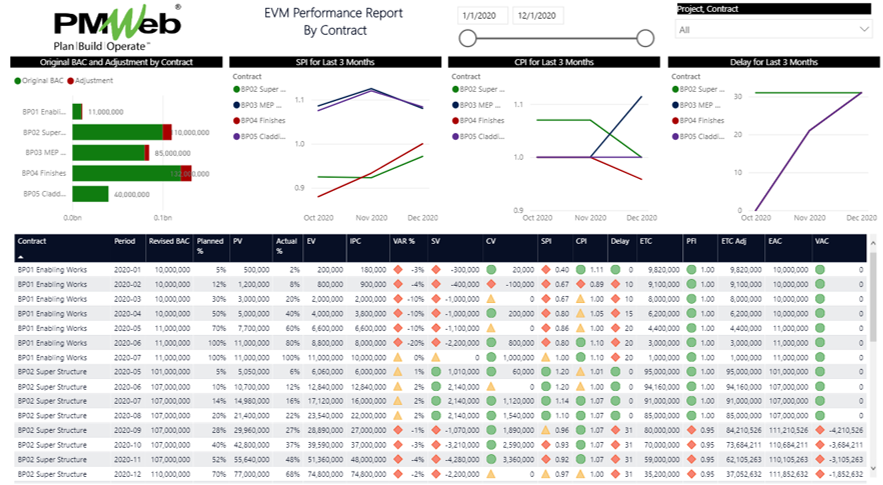 Having a trustworthy single version of the truth of the financial status of either an expansion or remodeling project for a retail brand is of great importance and a must requirement to the project owner. The presentation of such financial reports can be in different forms and formats. For example, the earned value management (EVM) method can be used to report each project or program’s financial performance as it provides a better understanding and visualization of the actual financial performance to date and what will be the impact of this performance on the forecast cost at completion and whether the project will go over budget or not.

Earned Value Management (EVM) reporting requires having the approved budget for each awarded contract or project also known as Budget at Completion (BAC), the planned spending for the approved budget or Planned Value (PV), the value of earned physical progress as reported in the project schedule or Earned Value (EV) and the Actual Cost (AC) incurred in completing the scope of work which was reported as complete. The Estimate to Complete (ETC) to complete the remaining scope of work will include in addition to the remaining contracts amount yet to be invoiced, the additional cost of potential and pending changes.

For expansion and remodeling projects that had been approved for execution, the approved cost estimate will be the starting point. The initial concept cost estimate will be further detailed to reflect the additional information that had become available to the project team as the project’s design gets further developed into drawings, specifications, and bill of quantities. 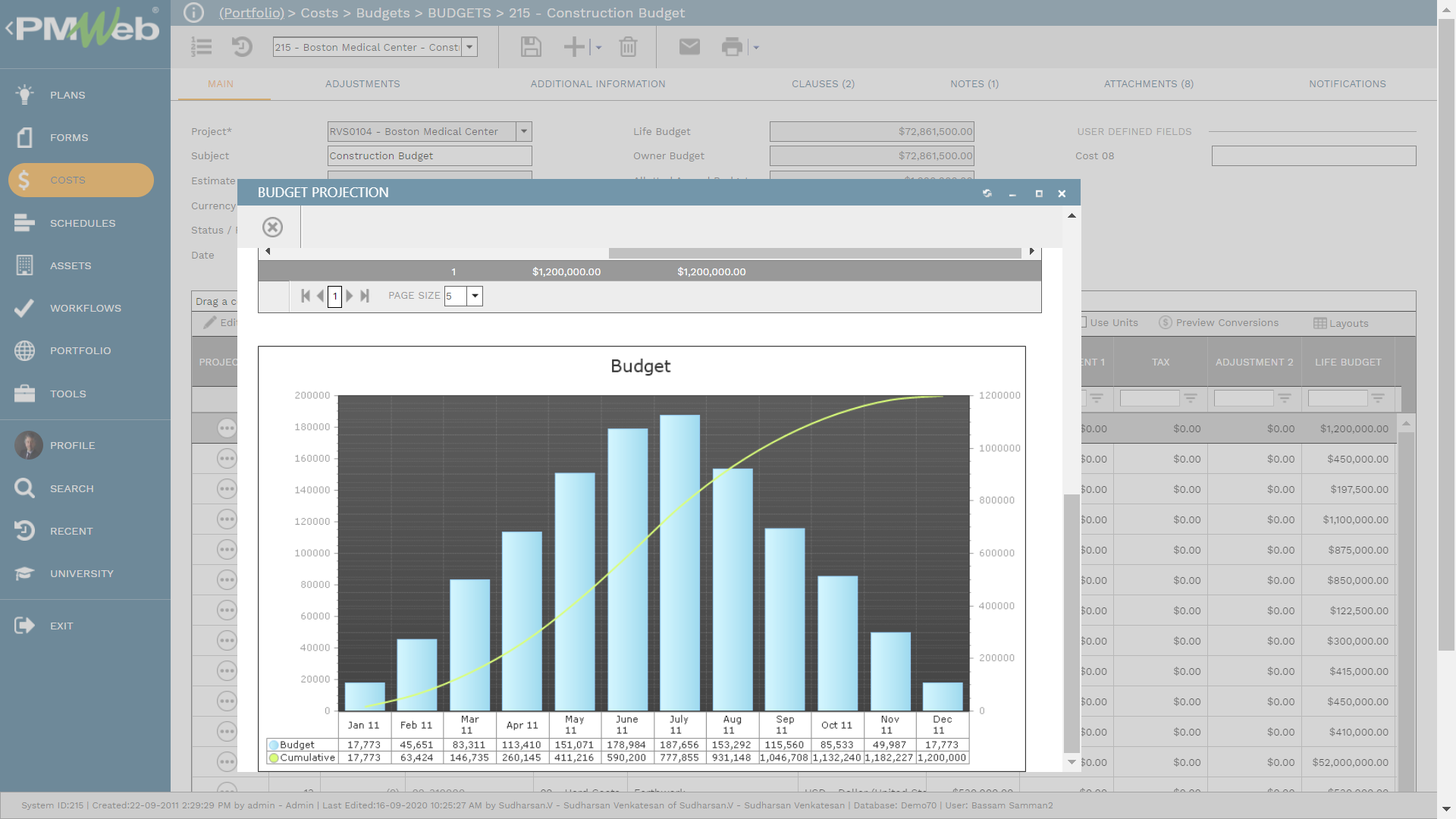 When a budget is considered to be the frozen baseline budget, any omissions, additions, or transfers within a budget, will be managed using the PMWeb budget request module. This will help keep track of all those changes, initiated by who and who has reviewed and/or approved it. Those actions will be captured from the workflow assigned to the budget request. 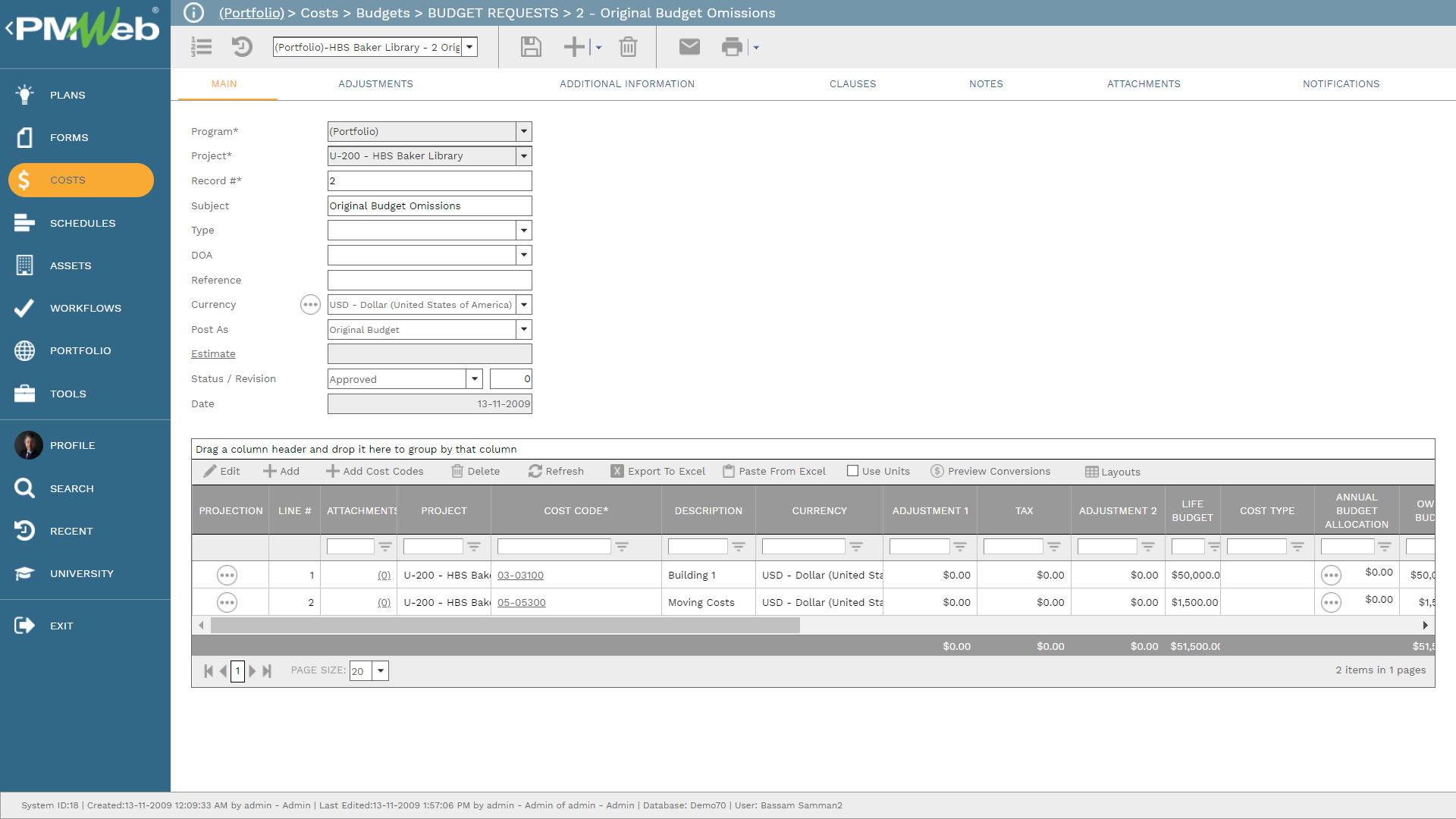 The approved cost estimate will also become the basis for generating the procurement bid packages for each project. The bid package will detail the bill of quantity line items associated with the outsourced scope of work. The procurement bid package will be also appended with the names of the bidders who are qualified to bid on the package’s scope of work. Those bidders will be selected from the PMWeb companies’ directory and for which their status will be shown as qualified. 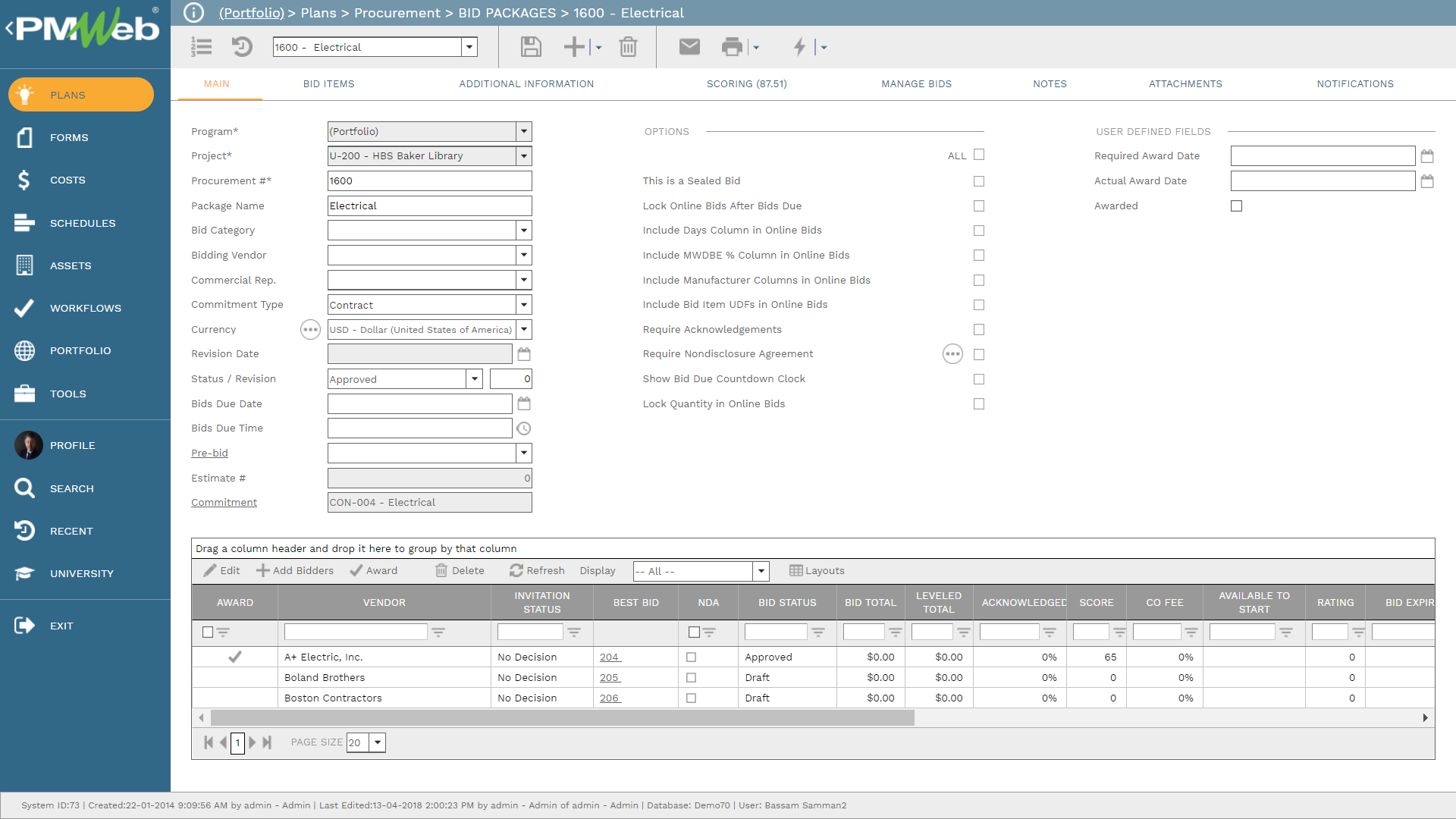 From within each bid package, the entity can send Invitation to Bid emails to the selected bidders for which each invitation email will the URL link to the online bid. The online bid form can be also configured to enable the bidder to submit the technical documents that are required to evaluate the bid proposal. The procurement bid package enables comparing the received bids with the approved cost estimate and awarding the commitment contract. 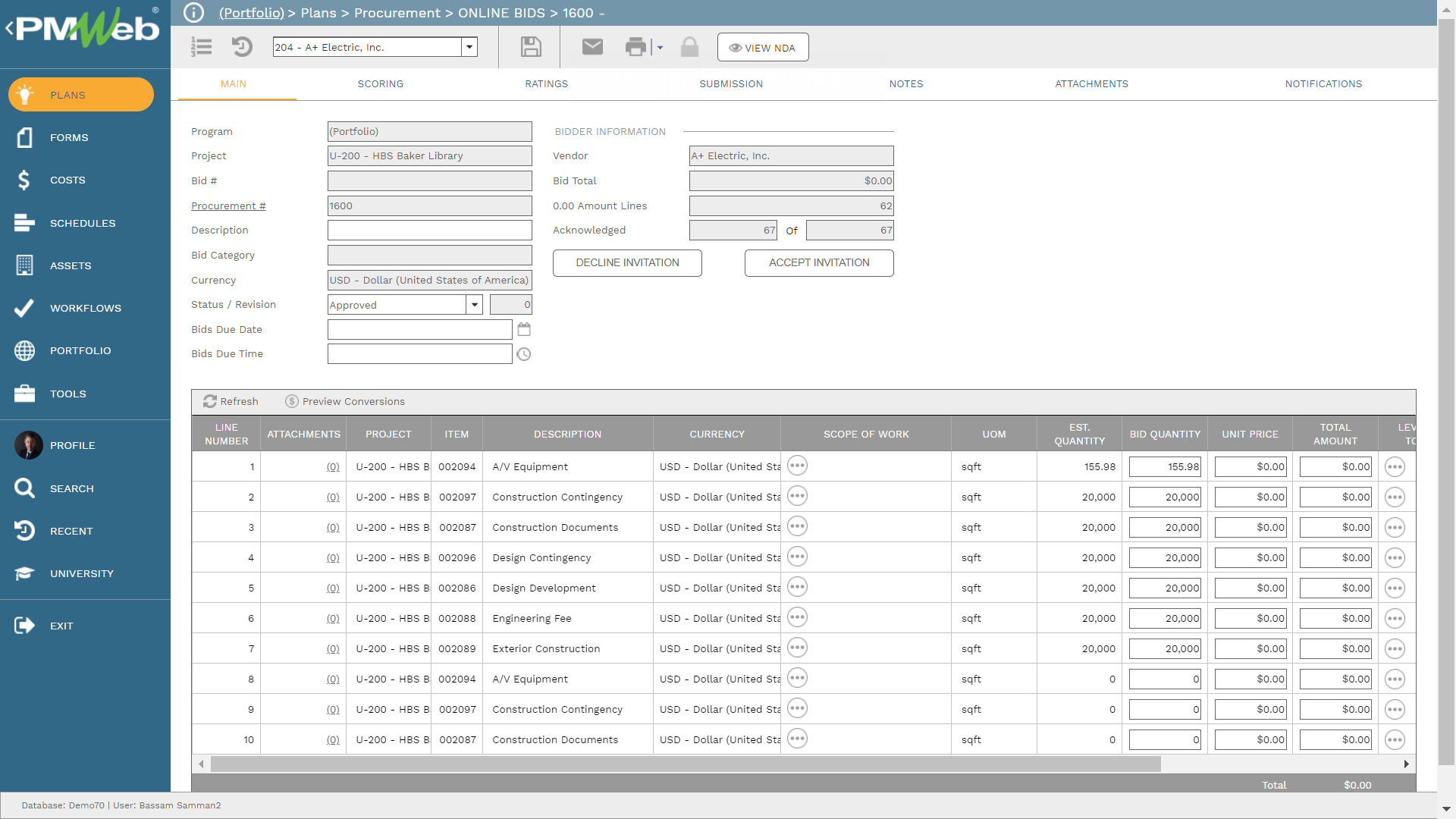 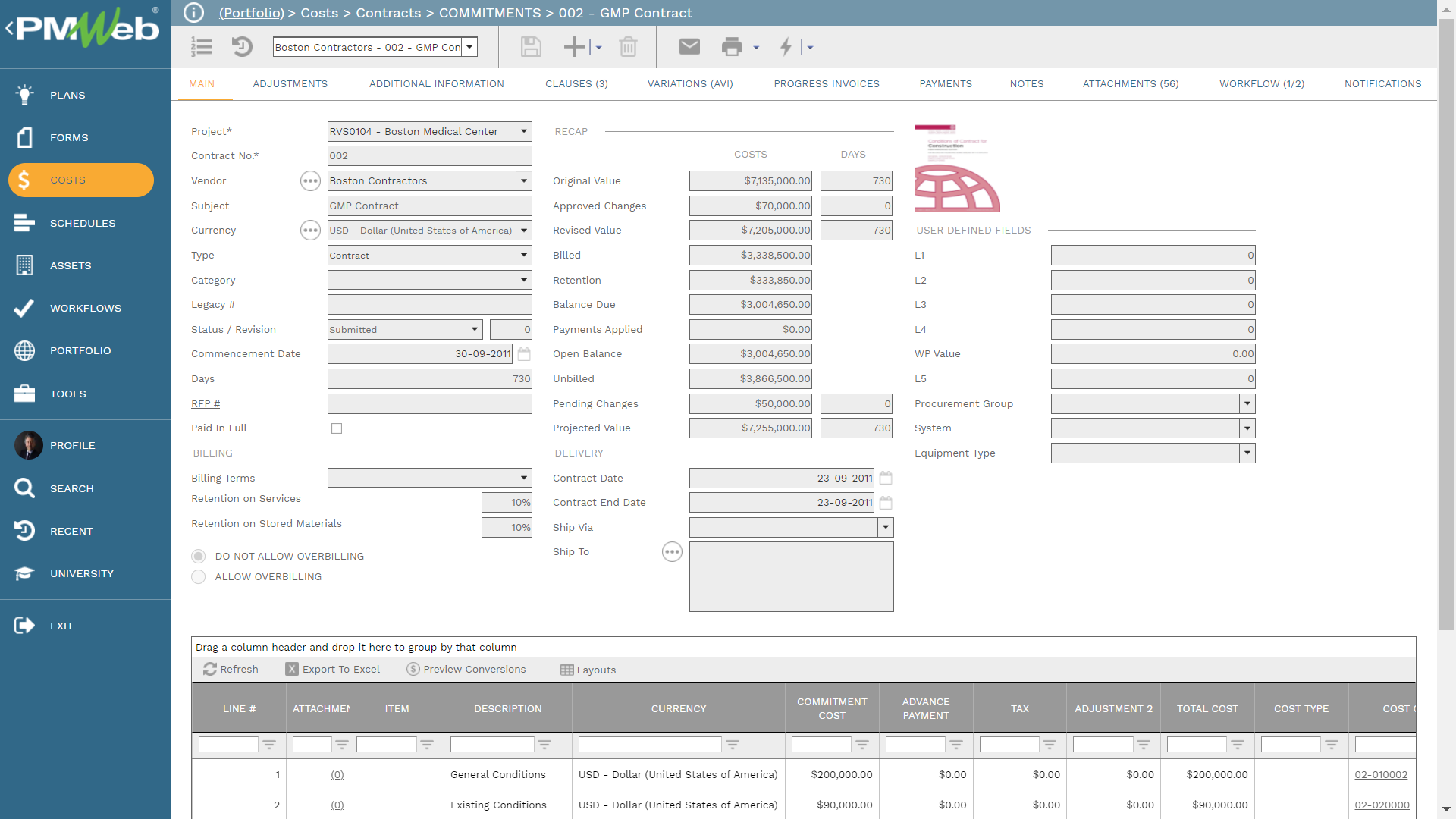 As the execution of each commitment contract commences, there is a requirement to keep a very close eye on all potential changes that could impact the final cost of the awarded contract. PMWeb potential changes module provides an early warning notification of all such changes. All those potential changes that have merit will be generated as change orders while others will be disregarded or they might become a potential for claims by the contractor or supplier. 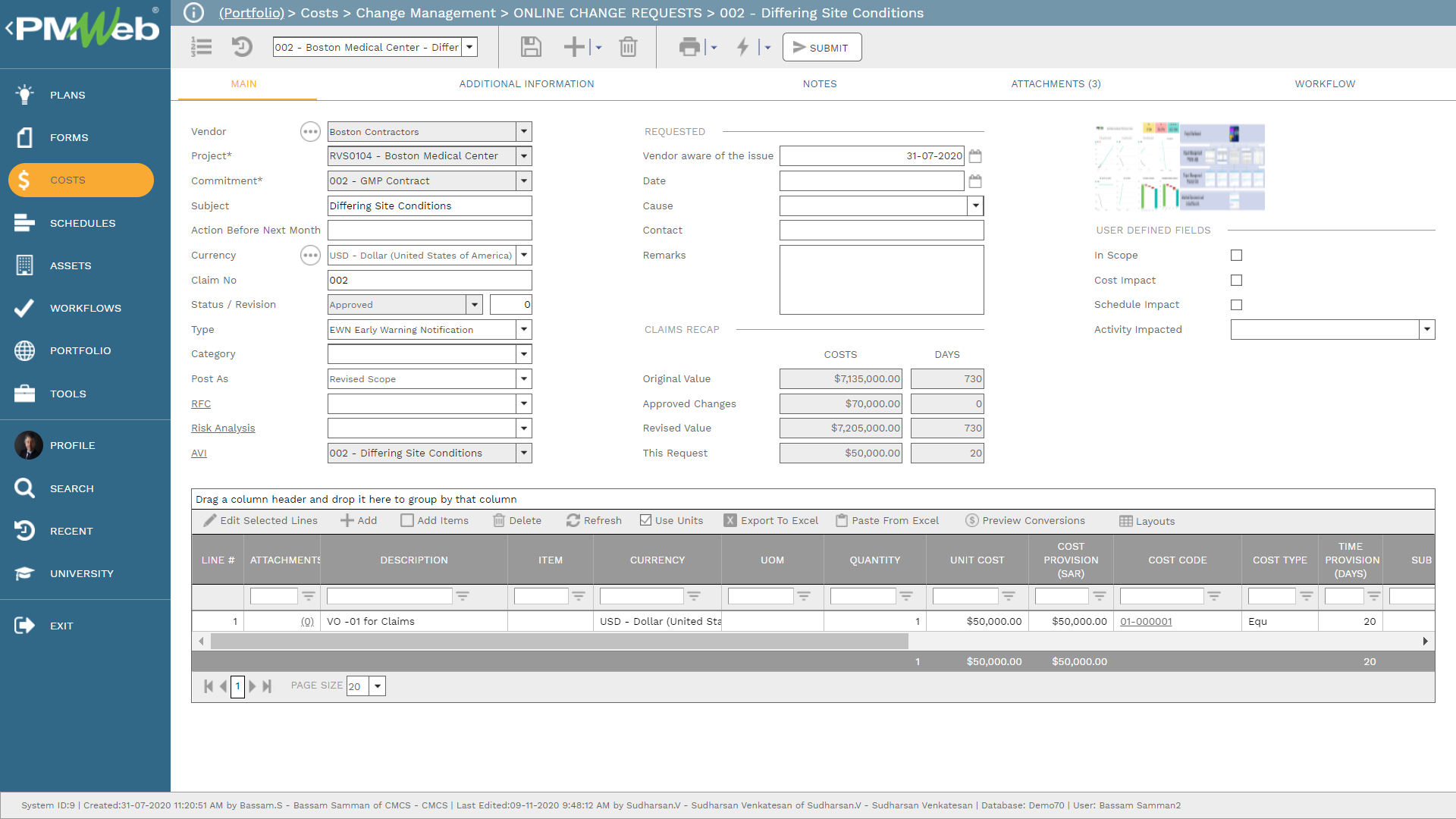 Change orders are the business process that will be used to manage all adjustments to the formally awarded commitment contract or purchase orders. Change orders could be issued for additional scope of work requested from the project owner side or identified by the contractors or suppliers. Change orders’ status can be approved, pending approval, rejected, and disputed. 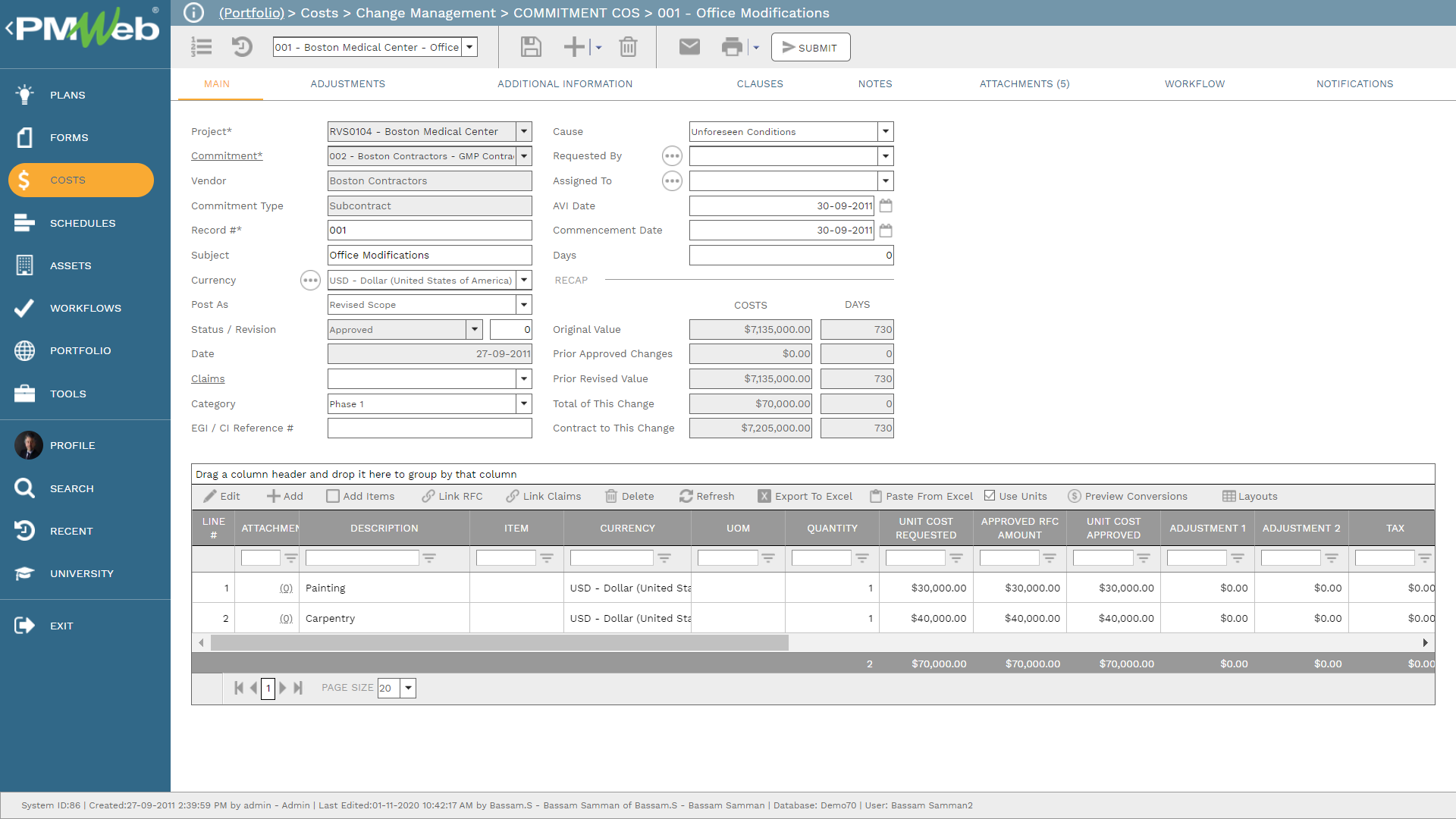 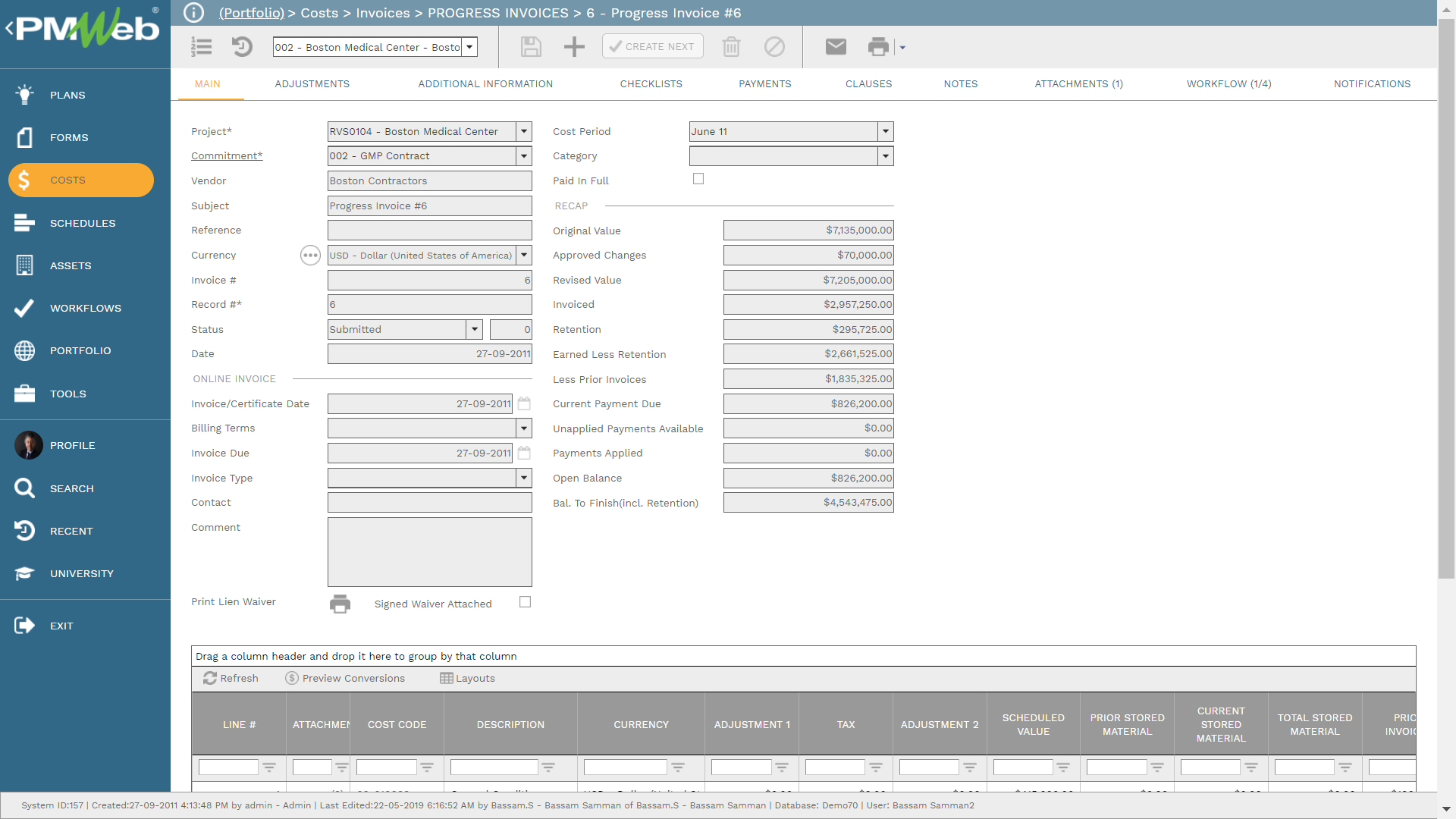 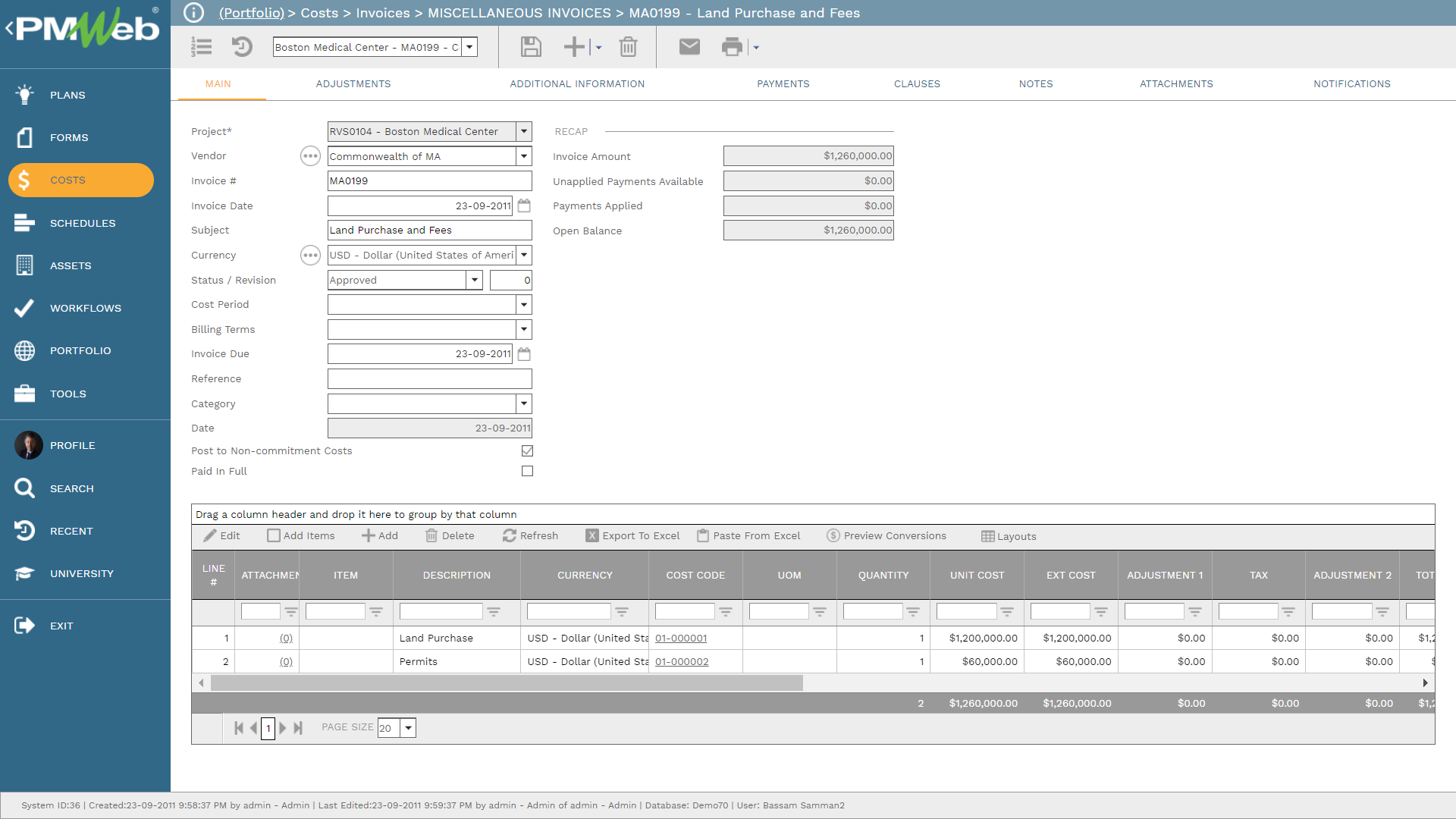 For the entity managing, the expansion and re-modeling projects might require adding the cost of their team involved in managing those projects. Although in many cases this will be one of the commitment contracts for project management services, nevertheless, PMWeb timesheet module can be used to capture the spent hours of those resources for which they will be charged against the project using the pay types of whether those were regular working hours, overtime hours, weekend hours, holiday hours among others. 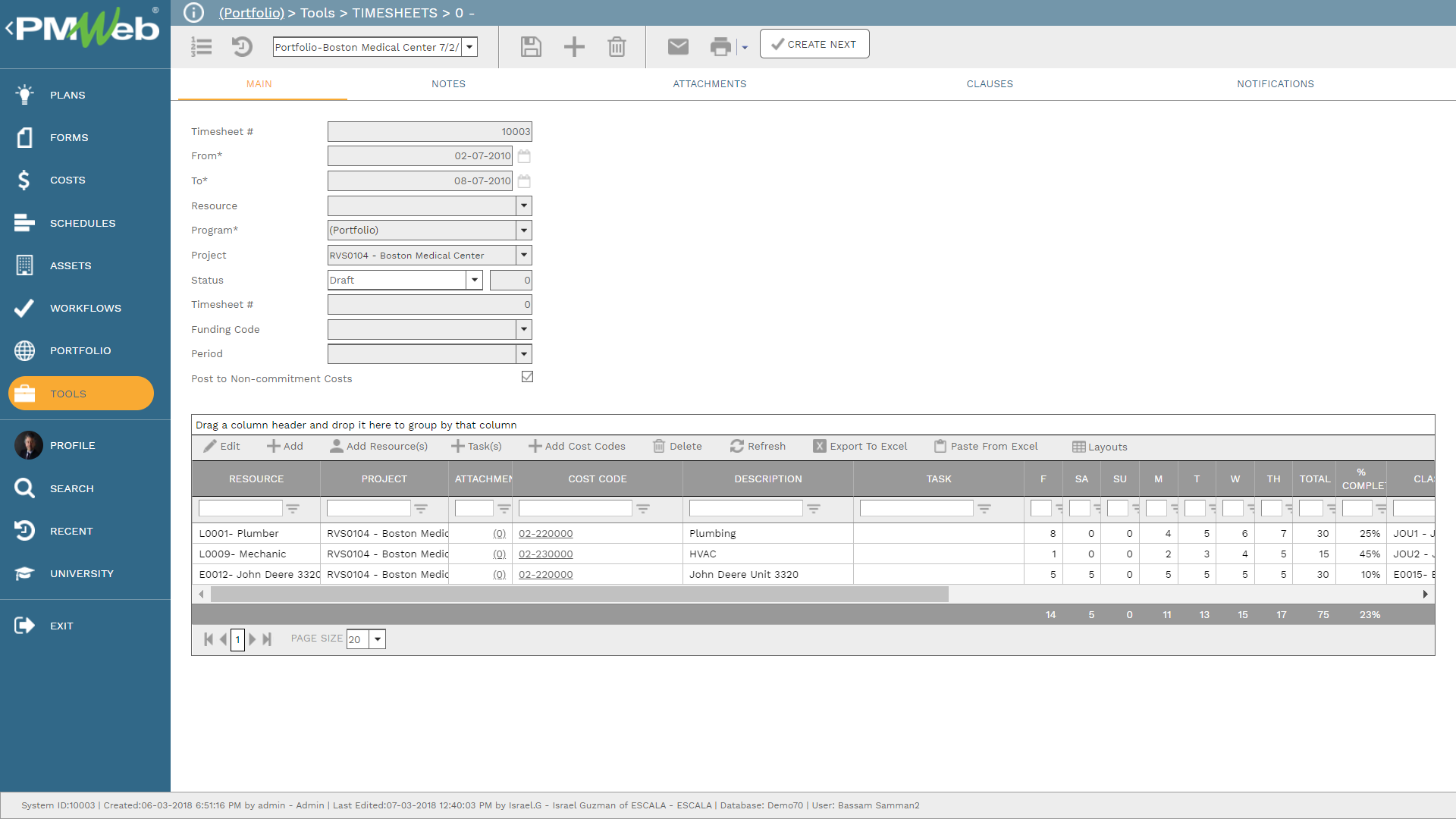 PMWeb will capture all of this cost data in what is known as the cost ledger. This ledger will become the basis for creating an unlimited number of cost worksheets to organize, summarize, group, and filter the cost data in any desired format. Cost worksheets can be easily by selecting what data columns to be displayed as well as having the option to create new alias data fields by adding mathematical formulas to the captured cost data. 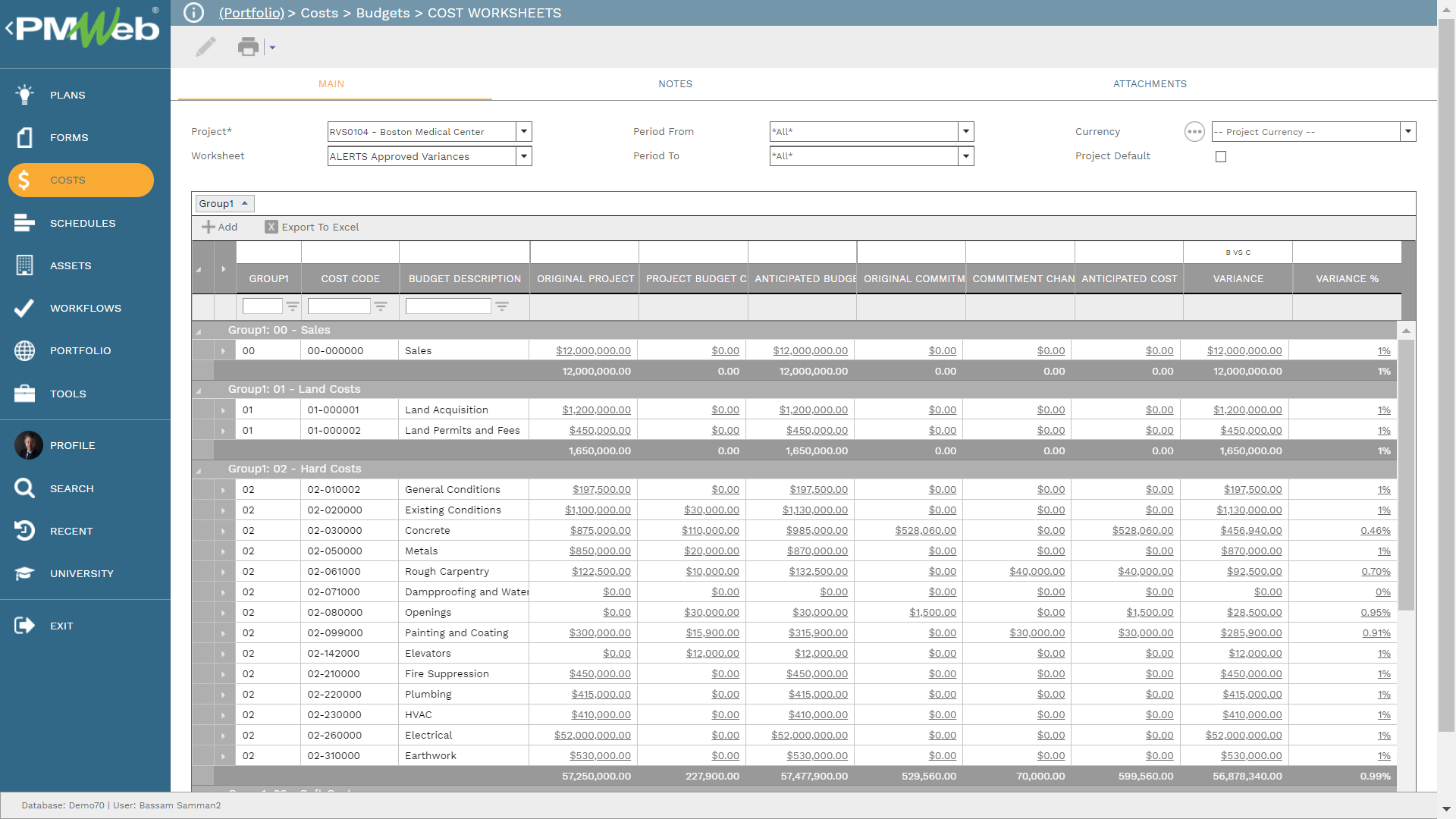 The data captured in all of those financial business processes will become available to be reported on in any desired form or format. Again, using some of PMWeb’s out-of-the-box reports, a cost worksheet is available to provide an overall integrated financial status of the project. The report can be designed to group and summarize the financial status of all projects that belong to each specific brand. The report can also be designed to have the option to drill down to a more detailed level for a project until reaching the financial transaction that was the basis for the reported value.

Similar to the many other reports available in PMWeb, the reader can drill down to the record that has caused the reported information. For example, those could be the change order, interim payment certificates, or any other financial transaction. The output can be also designed to list all record attachments and the workflow tasks status.