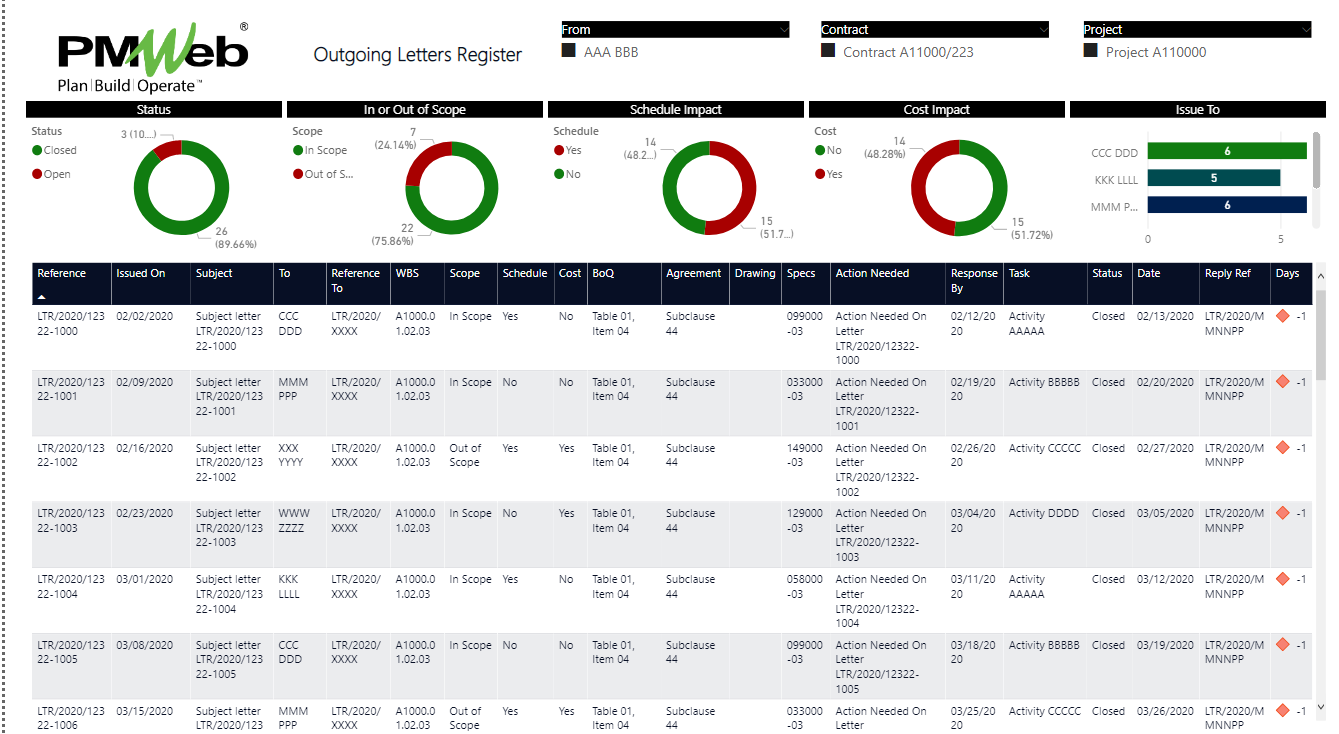 Regardless of the extent of business processes that need to be managed on capital construction projects, formal letter communications between the different project entities will always continue to exist and must be managed efficiently. Usually, the majority of those letters might entail events or actions that might end up being part of a claim submission if they were not responded to in a timely and comprehensive manner. Letters are no different from all other types of project communications where the response should be done promptly to avoid project delays and eventually claims for extension of time and prolongation costs.

Being the entity that is a part of the contract agreement, it is for the benefit of the project owner to improve the process as well as the quality of letters communicated between the different project entities. This can be done by enforcing a few best practices to be adopted by all project entities when issuing project-related letters. Those practices will improve the process of responding to issued letters promptly to reduce the chances of claims as well as enable better monitoring, evaluating, and reporting on all issued project letter and their status.

To start with, every issued letter should have the project name and contract agreement reference of the entity issuing the letter, letter date, and from whom and to whom the letter is issued. In addition, each letter needs to have a well-defined subject where each letter should only address a single subject.

It is recommended that letters include a field for the Work Breakdown Structure (WBS) level to refer to the project scope of work it relates to. The WBS levels are the WBS levels used in the integrated project schedule. Further, it is highly recommended that the letter includes the project schedule activity or milestone that could be impacted if the sought action on the issued letter was delayed. This will also help in providing an objective assessment of the letter’s priority. In addition, the issuer of the letter should clearly state if he/she believes that the content of the letter relates to either in-scope or out of scope of work, has time impact or not, and/or has cost impact or not. If the letter has a cost impact, it is recommended to add the estimated cost impact.

The letter should also include a reference to the contract documents it is associated with. For example, those could include specification sections, bill of quantity section, drawings, and contract agreement subclauses. Copies of those contract documents should be attached to the letter with the referenced sections highlighted. Since, commonly, some letters might be issued in response to other received letters, it is also important to include the received letter reference number, date, and received from who.

To drive the needed response actions to the issued letter, a letter should always end with the action that the letter issuer is seeking to have. Phrases such as ‘This is for your information and action’, ‘we reserve our rights’ or ‘please do the needful’ are meaningless. The letter issuer should specifically state what action is necessary, what rights the issuer is entitled to, and what ‘the needful’ actually is. In addition, an action need date should be added.

The letter should include a list of those individuals who need to be either carbon copied (CC) or blind carbon copied (BCC) on the issued letter. For each CCed or BCCed individual, the issuer needs also to state which company he or she represents. Since the letter is project-specific, there could be the requirement that all those carbon-copied individuals should be defined in the project’s contacts directory.

Finally, the layout of all issued letters on a specific project, regardless of the entity issuing the letter, should have a standard format in terms of the location and position of the different data fields. The letter output format will be branded for each project entity to show their logo and address. This will enable to formally communicate the letter by either printing and wet-signing the output letter or saving the letter in a PDF file format so it can be digitally signed.

Using a Project Management Information System (PMIS) like PMWeb, outgoing letter correspondence can be transformed into a business process that will be managed along with the other business processes defined to manage the capital construction project delivery. PMWeb custom form builder will be used the create the outgoing letter correspondence template that will be specific for each project entity involved in the project. Those would usually include the project owner, project management consultant, design consultant, supervision consultant, and contractors. The layout of those correspondence templates will be identical to all, nevertheless, access to each correspondence module will be restricted to the entity who will be issuing the letter. 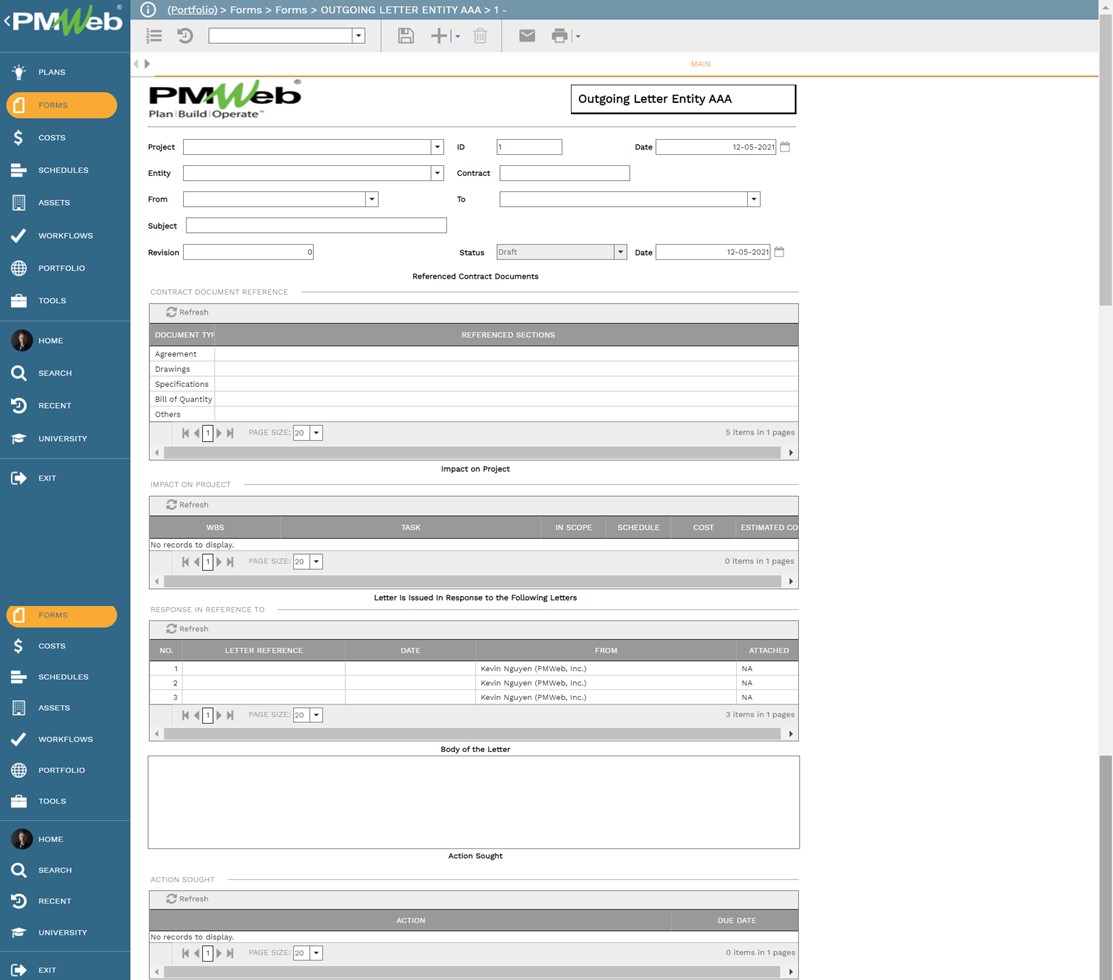 Each issued letter should be attached with all referenced documents as well as other documents needed to understand what the letter is all about. Those could include drawings, specification sections, contract subclauses, bill of quantity pages, pictures, videos, and other types of supportive documents. It is highly recommended that all those supportive documents be uploaded and stored in the PMWeb document management repository. Folders and subfolders will be created to ensure that those documents are stored in their intended location that matches the physical filing structure kept on the project site. In addition to those documents, the issuer of the letter needs to link relevant records generated from the different business processes managed in PMWeb. 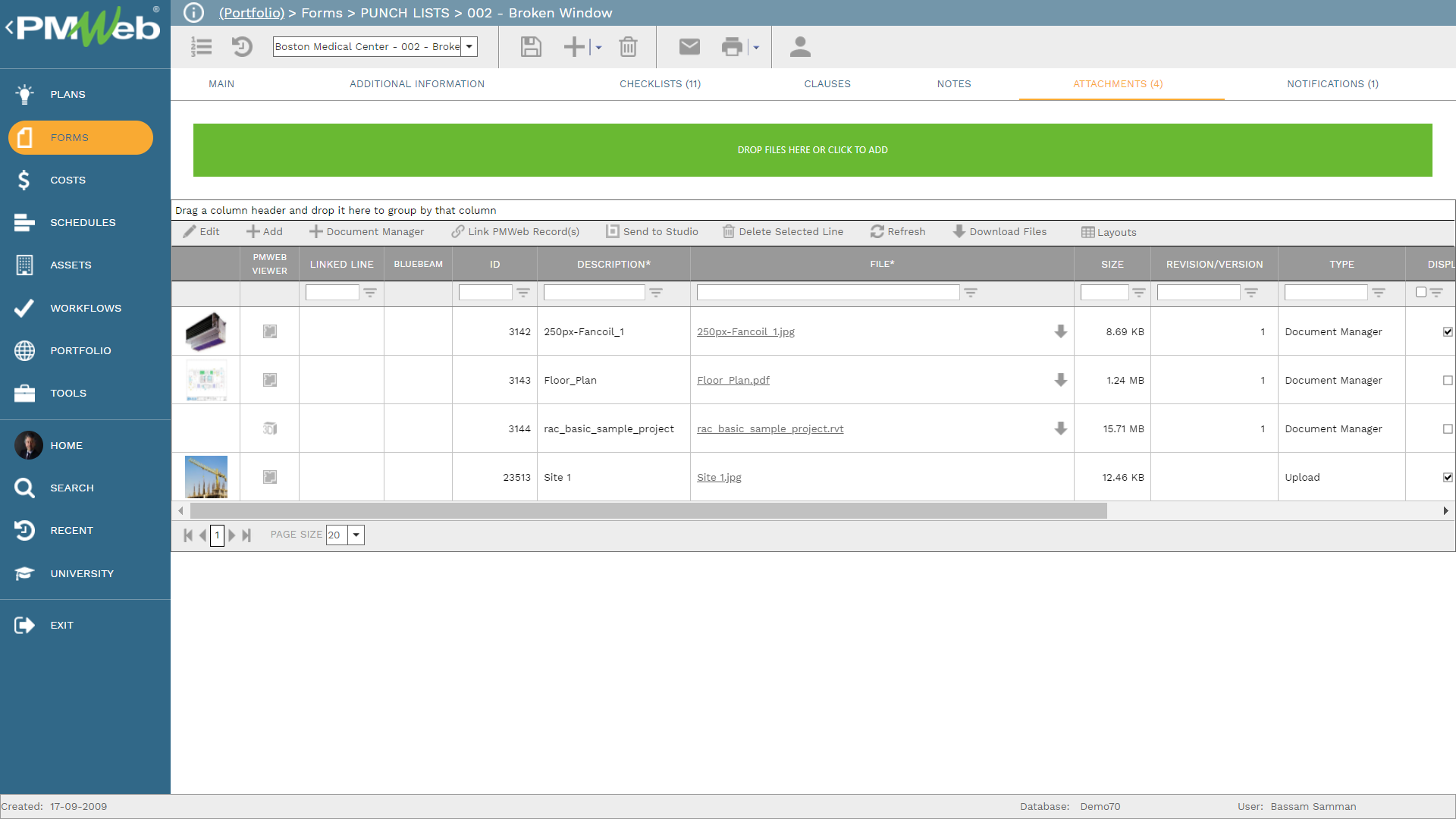 It is very common on capital construction projects that will be different team members of each project entity who will prepare the content of the letter which will be eventually by the authorized entity representative as defined in the project management plan. Therefore, it is highly recommended that a workflow be assigned to the letter template. The workflow will map the sequence of the tasks needed by each entity before a letter is formally issued.

This also brings the option of capturing the estimated cost exposure that the entity believes the letter could be associated with for which the work will be embedded with a condition rule to enforce the delegation of authority (DoA) or authority approval levels associated with financial matters. 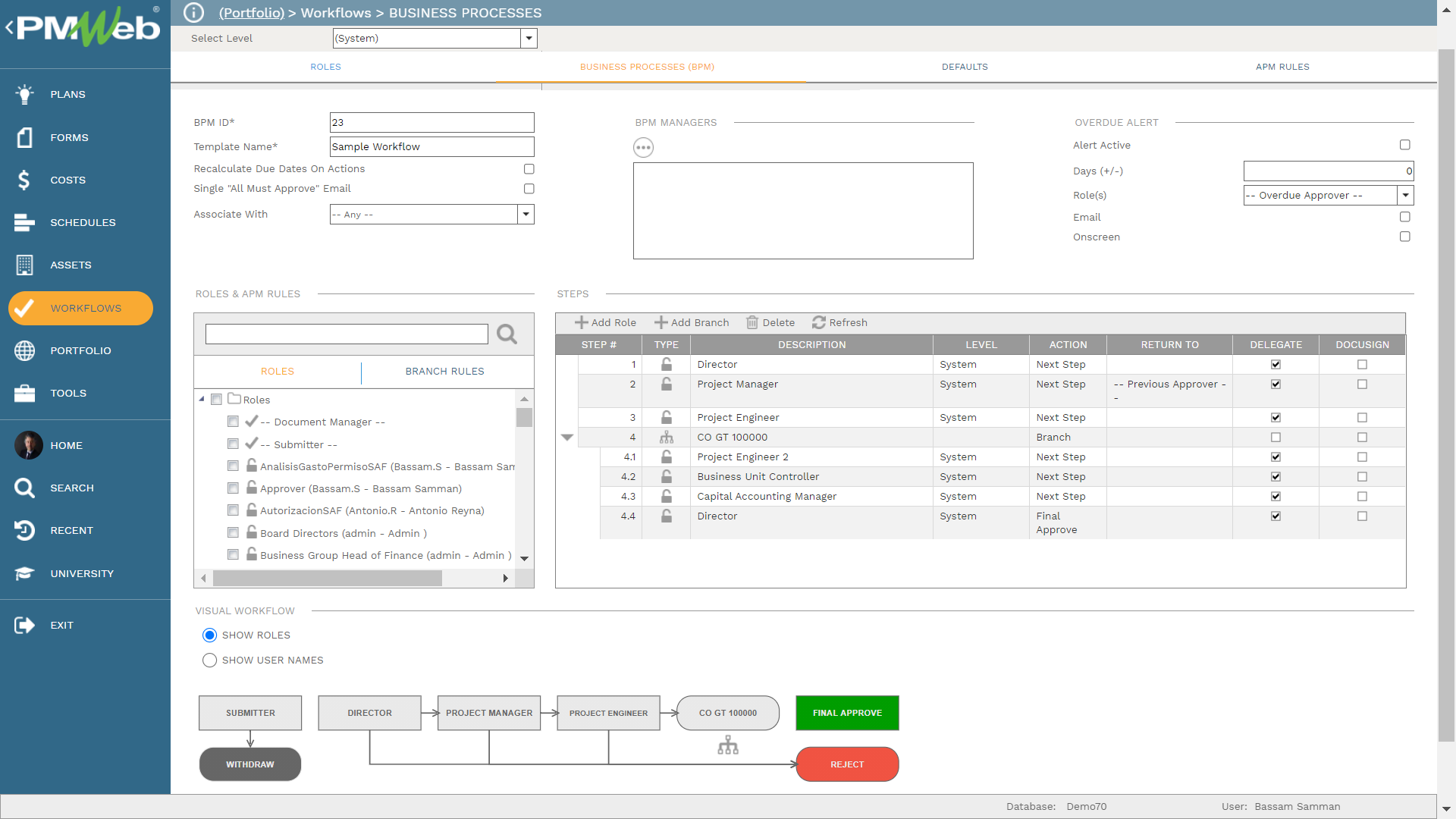 Since outgoing letters need to be formally communicated, an output letter form will be created. The form which will be created by using either PMWeb BI Report Writer or PMWeb Word will include all the fields that need to be part of the communicated letter. Some of the custom form fields which could be considered confidential or internal will be excluded from the output form. In addition, it will include a list of attached documents for which they will be hyperlinked to the relevant document URL link. This will enable the reader of the letter to view those documents without the need to have them printed. 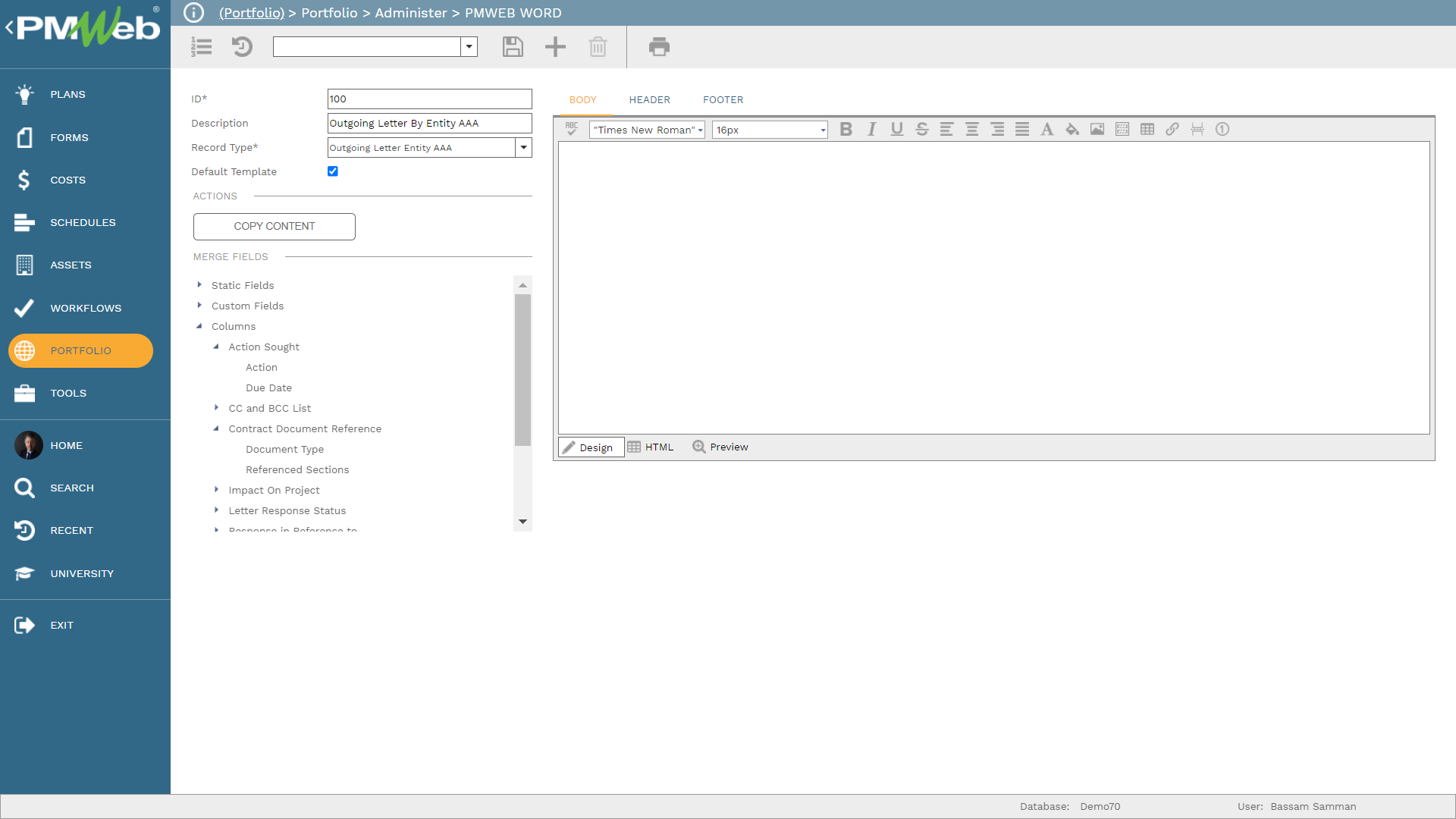 The output letter can be printed so it can be wet-signed or saved in PDF file format so it can be digitally signed. A scanned copy of the letter or the digitally signed PDF file will be also attached to the correspondence form. The wet-signed letter will be scanned and attached to the letter form. To communicate or send the letter to its intended recipients, the PMWeb notification command will be used. This command allows sending the output letter along with all attachments to the intended recipients. 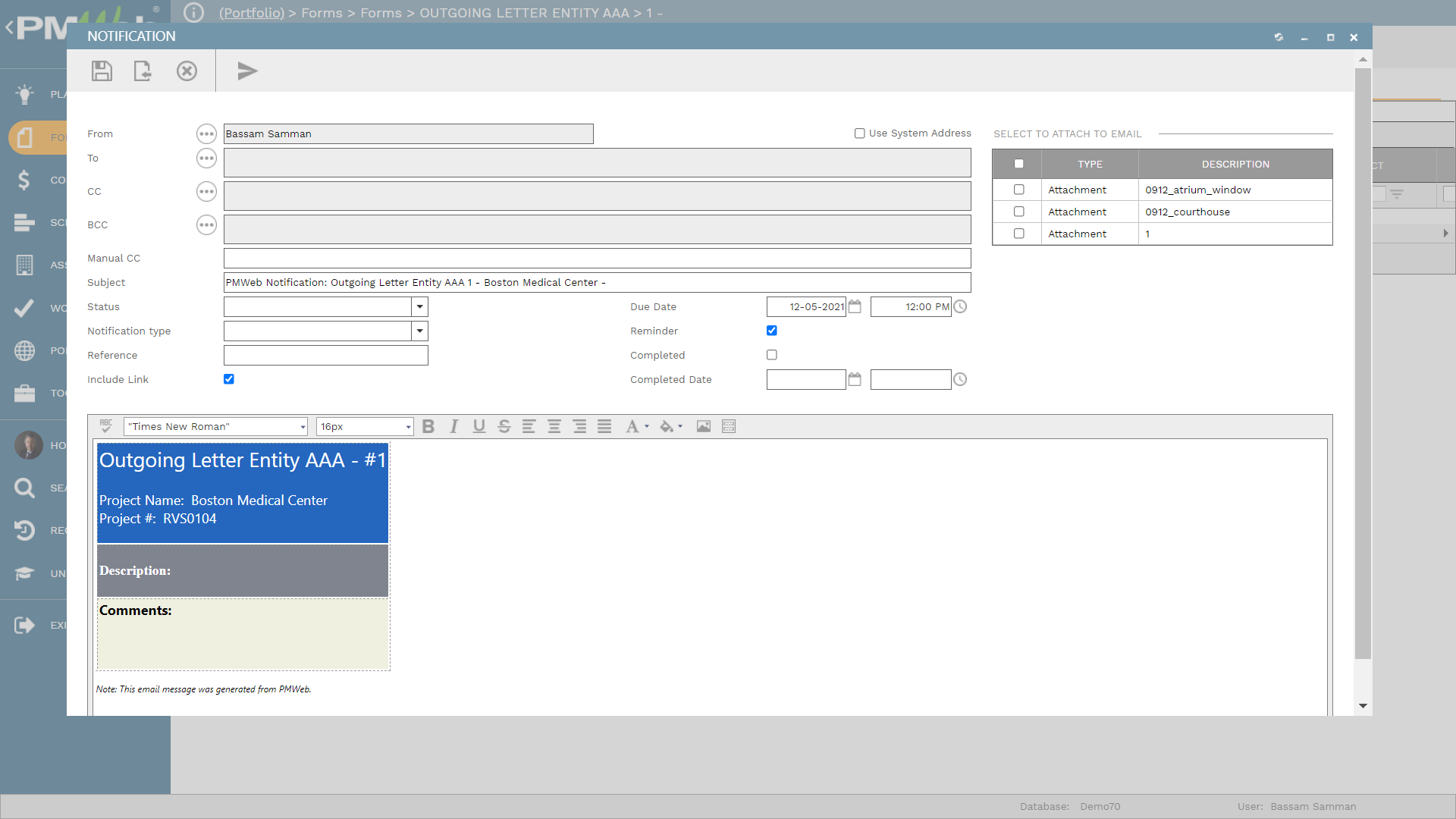 The outgoing letters data captured in PMWeb allows the entity to create reports with visuals to monitor, evaluate and report on all issued letters. In addition to the register, visuals will be added to analyze the response status of those letters, how many of those are out of scope of work, how many have schedule impact, and/or how many have cost impact. The report will be designed to allow the reader to drilldown to each specific issued letter to view all details as well as drilldown to the letter’s attached documents and linked records. 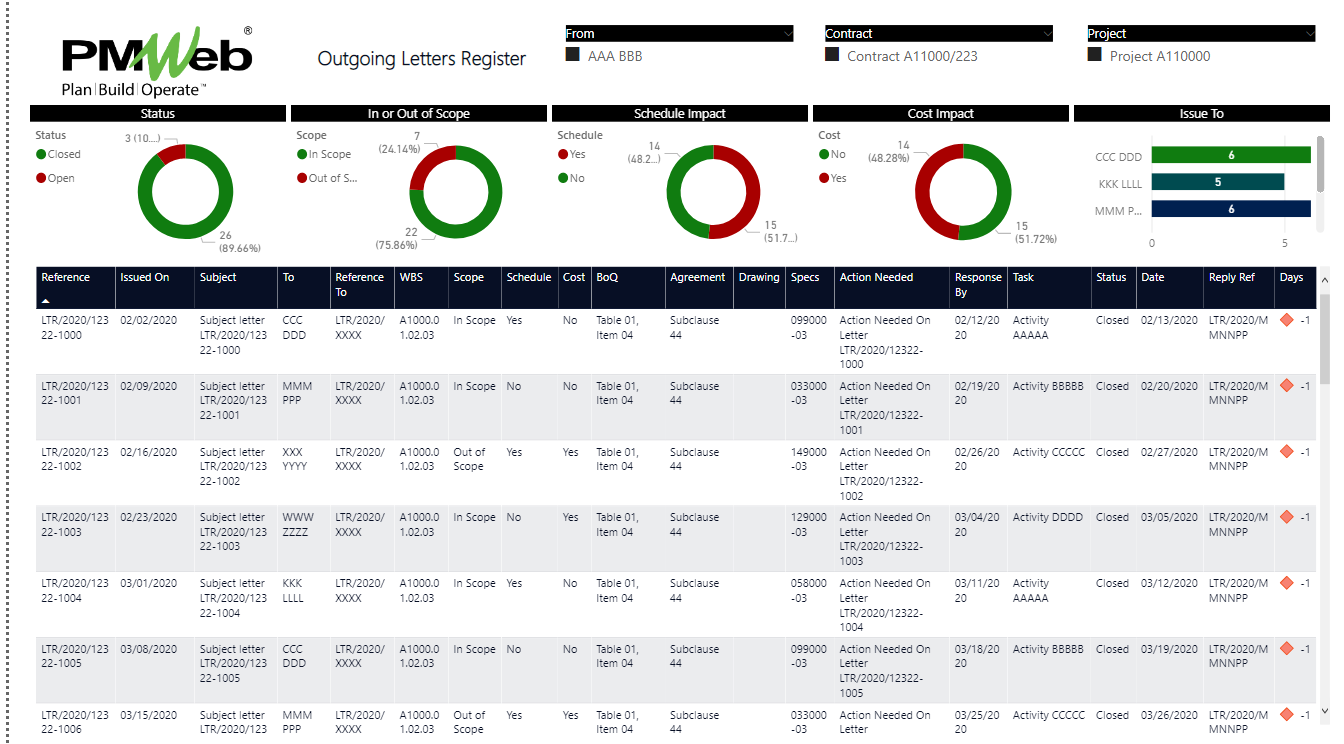