Design Consultants, Project Management Consultants, Supervision Consultants among other entities who might get involved in delivering professional services on capital construction projects always have the requirement to estimate the cost of deliverables that will be the basis of their bid proposal submission. Unlike the estimates prepared by contractors, those entities need to identify the tasks needed to produce those deliverables and the resources needed to achieve them. Only then they can come with the cost estimate for their scope of services.

This requires creating the deliverables’ driven resource-loaded schedule to provide an understanding of the resources needed to produce each deliverable. This will be followed by determining the required resources to be deployed and their level of involvement, that is full-time or part-time. Using the selling rates for those resources, those entities will be able to establish the price of each project deliverable which will become the basis for coming up with the proposal price for the professional services to be offered.

Using a Project Management Information System (PMIS) like PMWeb, those entities will be able to come with a comprehensive solution to estimate the professional proposal price estimate as well as capture the details of the awarded contract if they were successful, changes to the contract, the actual amount invoiced, actual hours spent against each deliverable against what was planned among others.

The first step to start with is for those entities to create the selling price rate card from the different resource categories that could be used on their projects. Those prices could include multiple rate types including example regular pay, overtime pay, weekend pay, and holiday pay. It can also include other types of pay types like local, regional, and international projects or on-site or off-site deployment among others.

After defining those pay categories, the entity will add the relevant price for each defined pay rate. Those are usually rates per hour although they can be defined as man-day rates. All price rates need to be in a single currency, say for example USD. This information will be added in PMWeb Labor Resources Module.

This will be followed by creating a single repository for the different labor or equipment resources that those entities might deploy on their projects. PMWeb labor resources module allows capturing the complete details of every single labor resource as well as equipment resource. In addition, new user-defined fields can be added if there is a need to capture additional information for those resources. 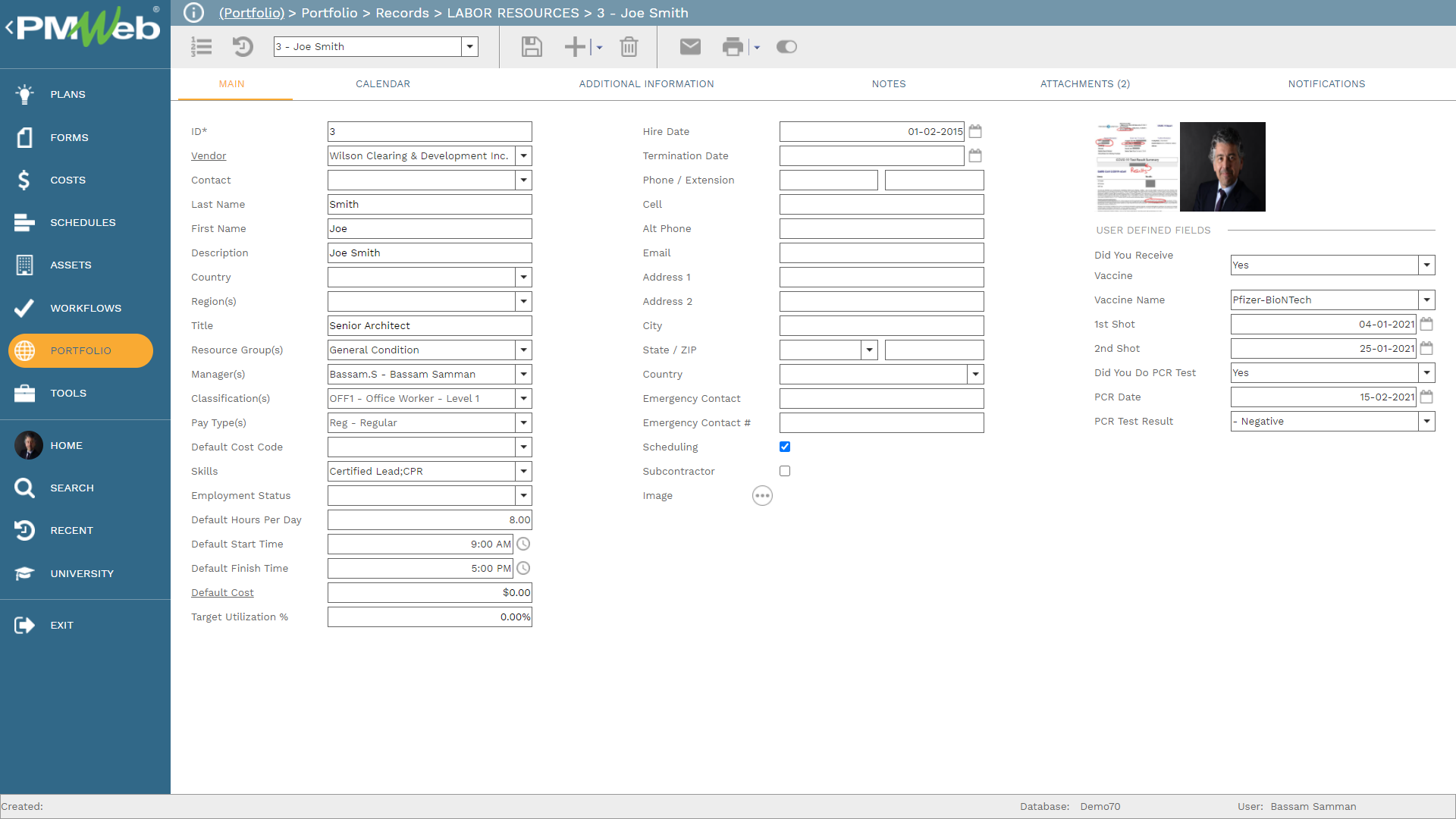 For each labor resource, PMWeb allows defining the working calendar for the resource. Those include the day-work of the resource as resources could be located in different countries where they have to follow the workweek of each country. In addition, PMWeb allows capturing other off-days and holidays that are specific to each resource.

Supportive documents that are specific for each labor resource such as CV, picture, passport copy and other documents that are usually included when submitting a professional services proposal need also to be attached to the resource. It is highly recommended that all those documents be uploaded and stored in their relevant folder or subfolder in the PMWeb document management repository.

It should be noted that all steps associated with defining the labor and equipment resources that will be used by the entity for professional services proposals will be only done once as this data will become available for all proposals that need to be estimated and managed in PMWeb.

The next step is to create the project’s work breakdown structure (WBS) which needs to be deliverable driven. This will ensure that the professional services’ scope of work has been addressed in full. PMWeb WBS module will be used to create those levels with the option to import the WBS if was already created in MS Excel file format. 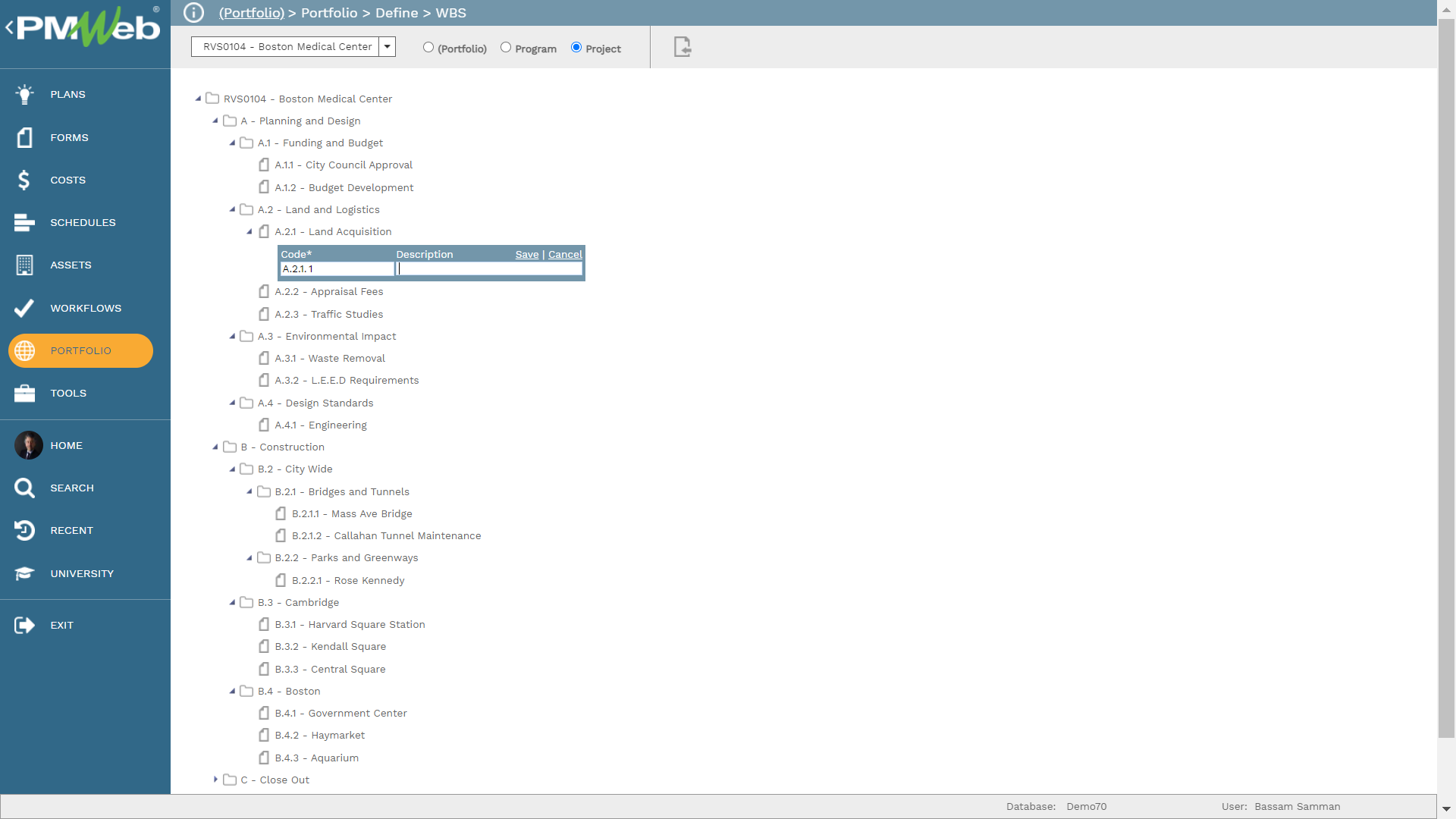 This will be followed by creating the deliverables-driven resource-loaded schedule for the professional services proposal. PMWeb scheduling module will be used to create this schedule by defining the tasks needed for each WBS level, resource loading those tasks, adding the preceding and succeeding tasks dependencies, selecting their relevant work calendar, add date constraints among others. Each professional services deliverable will be also added as a summary schedule activity to enable selecting and displaying them.

Of course, schedule templates can be created and saved if the deliverables for professional services proposals that the entity that needs to bid for are the same among all proposals. 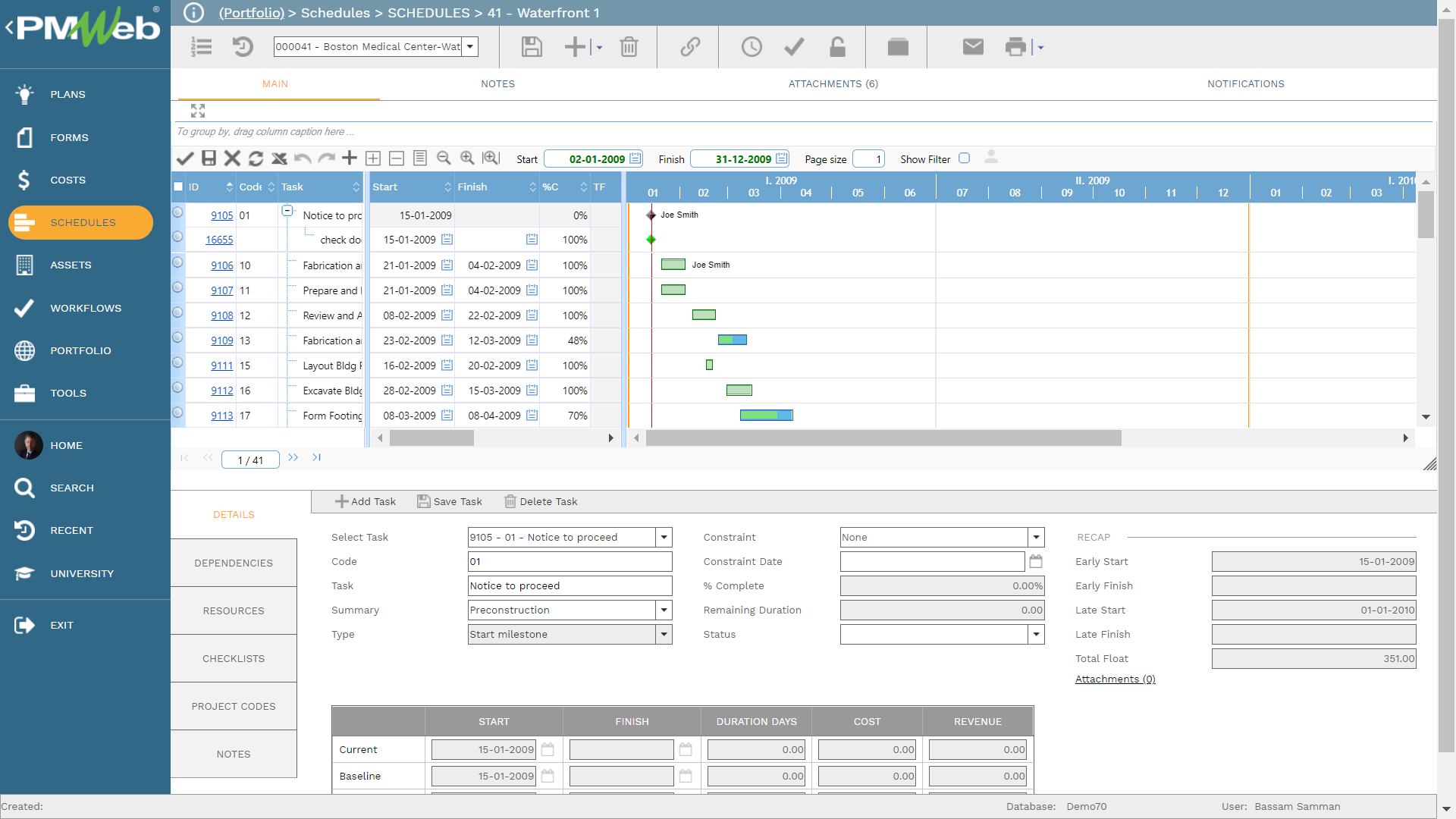 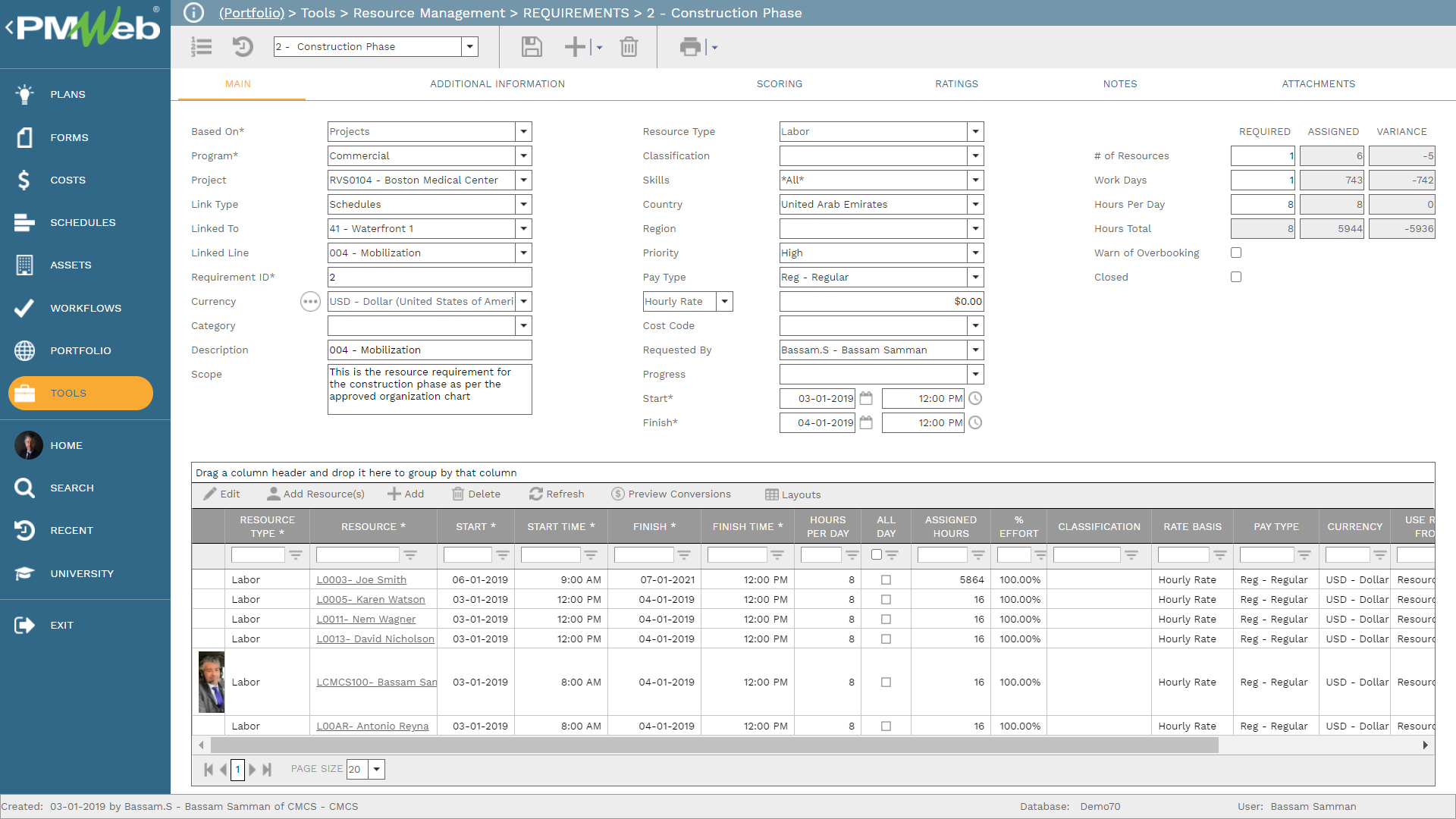 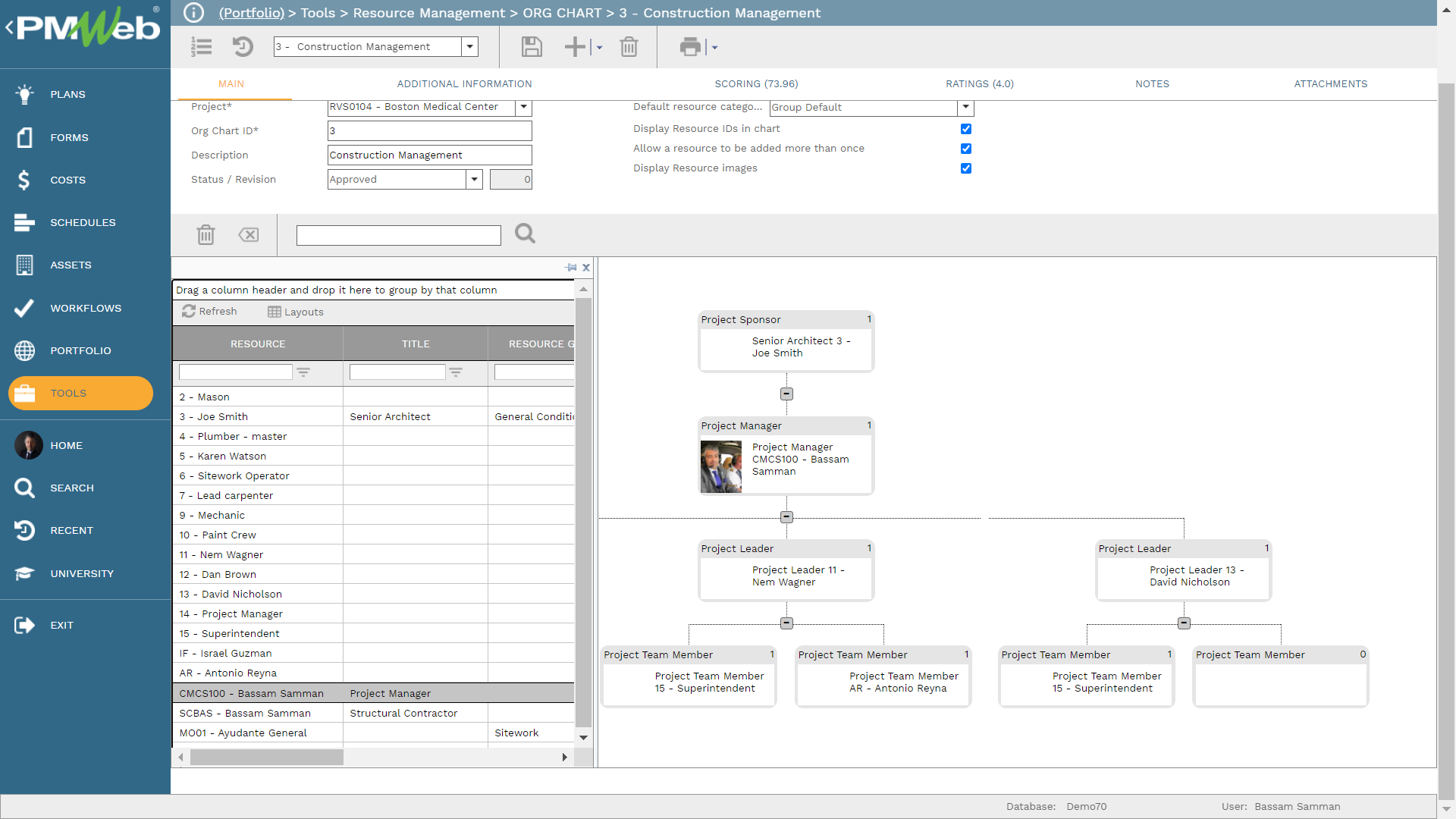 Since the purpose of estimating the cost of the resources requirements for the professional services proposal is to come with the cost proposal for the project, it is recommended to assign the relevant cost breakdown structure (CBS) to each resource required for achieving deliverables. This will not only help in consolidating the proposal financial data but will be also needed after awarding the professional services contract to compare and report on the estimated resource hours against what has been spent. PMWeb cost breakdown structure (CBS) or cost codes allows creating up to 16 levels of breakdown structure with each could have 10 digits length. The CBS will be usually aligned with the entity’s financial or accounting system chart of accounts. 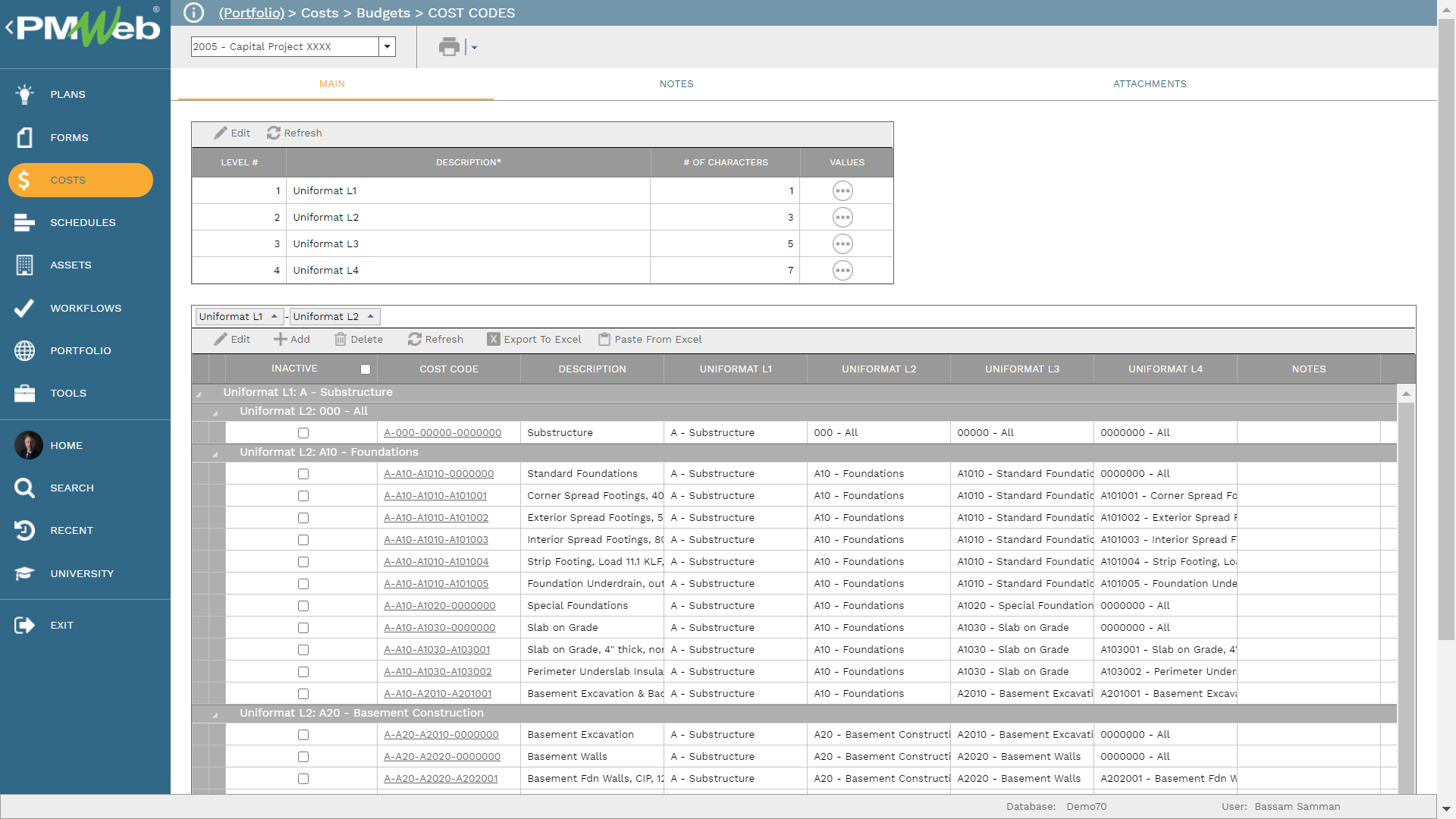 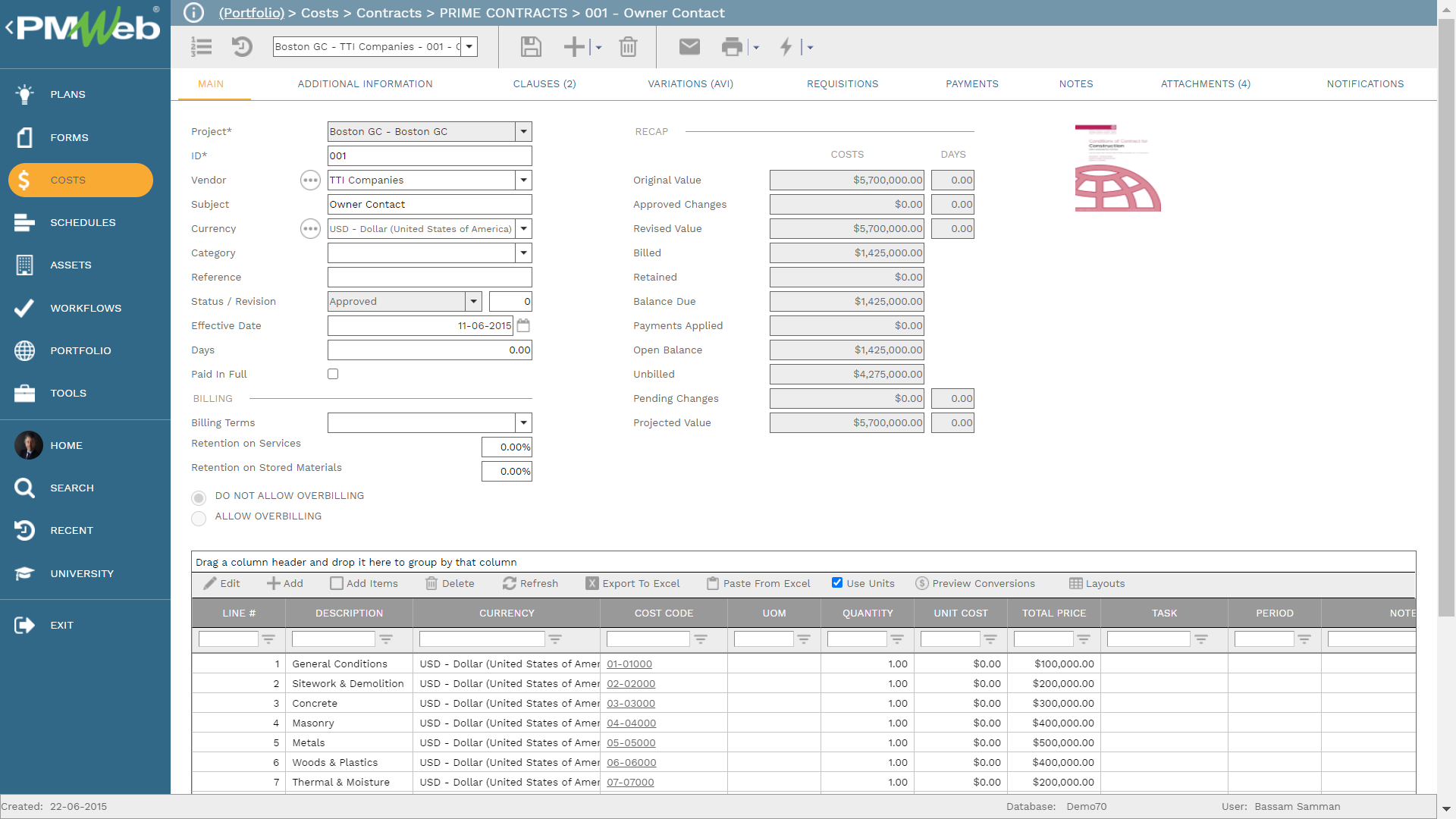 Similar to any other contract agreement, all changes to the original contract will be captured using the PMWeb changes module. Those change orders will include pending and approved changes. Each change order will capture the cost details and any agreed project completion date adjustment. 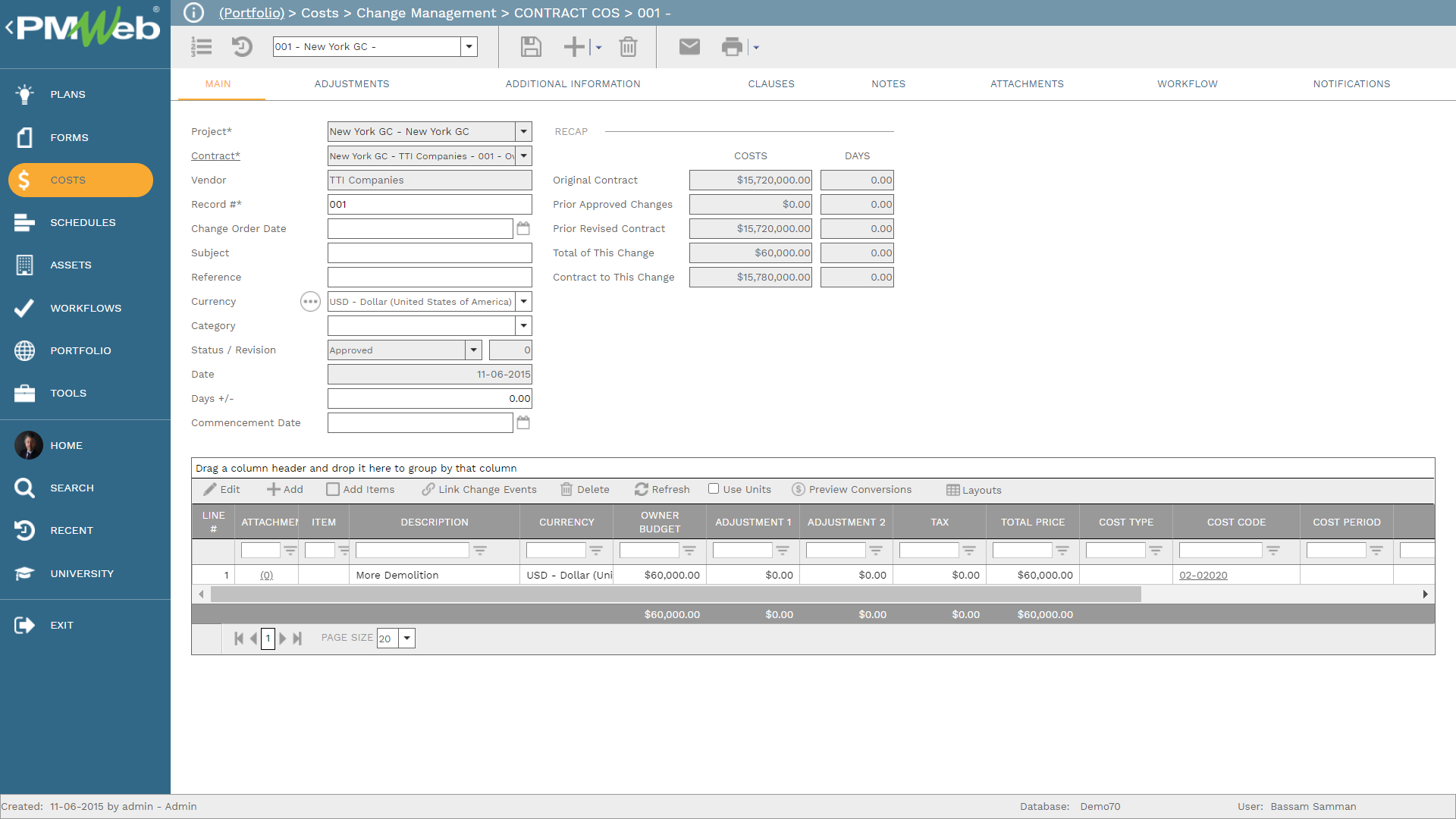 The interim progress invoices for each progress period will be also captured in PMWeb. The percent complete for each line item can be manually added or imported from the updated project schedule activity. This will provide the total of the current period payment due. PMWeb also allows capturing the actual payment received against the approved interim progress invoice. 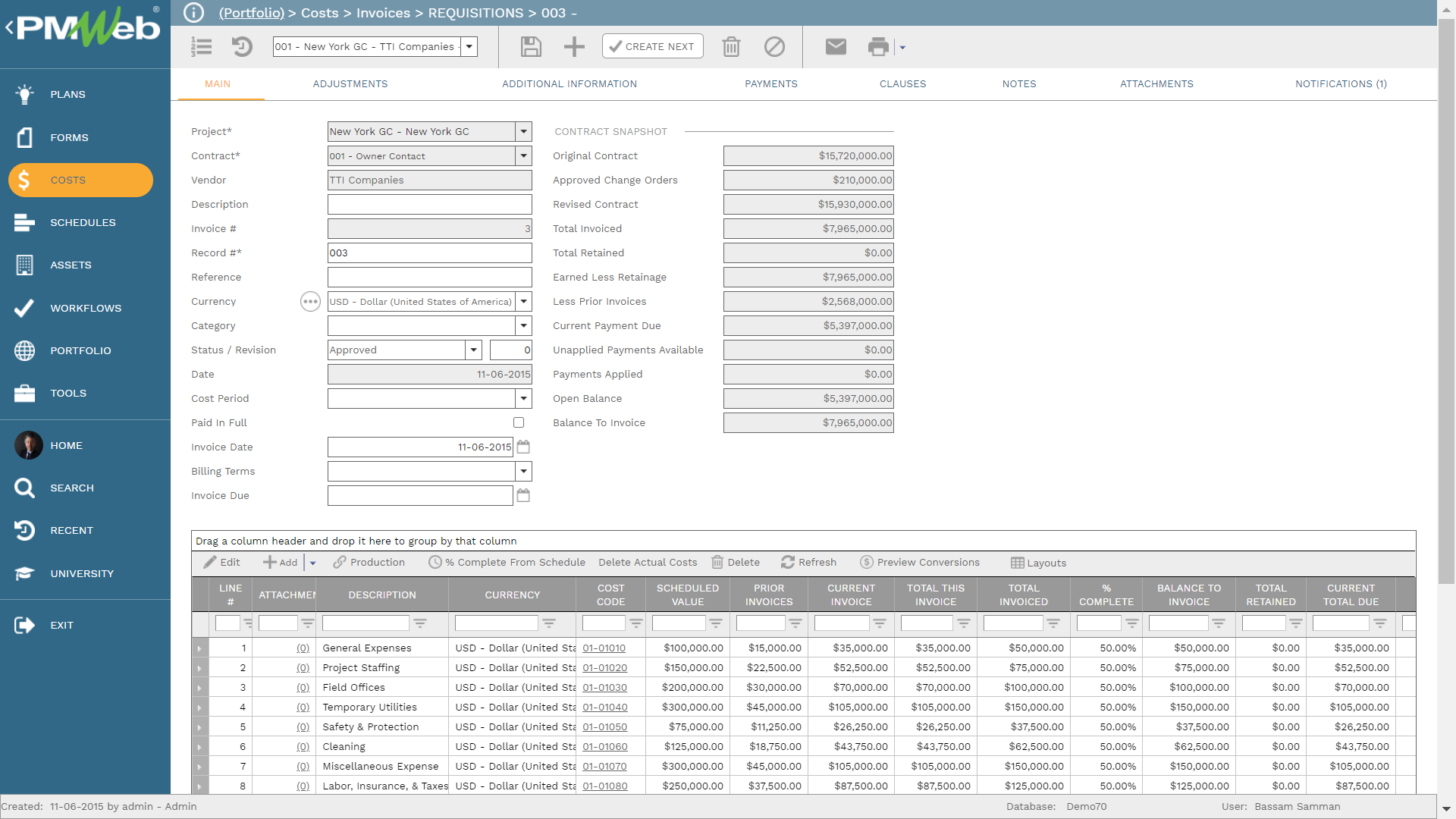 Capturing and managing the actual resource hours spent for each deliverable along with the actual cost will be managed using the PMWeb timesheet module. The timesheet will be used to capture the actual hours spent by each resource. Those hours will be associated with the cost breakdown structure (CBS) they belong to as well as the project schedule activity the details of the project deliverable those actual hours are associated with. In the PMWeb timesheet module, there is also the option to change the resource hours pay type, for example from regular to overtime. 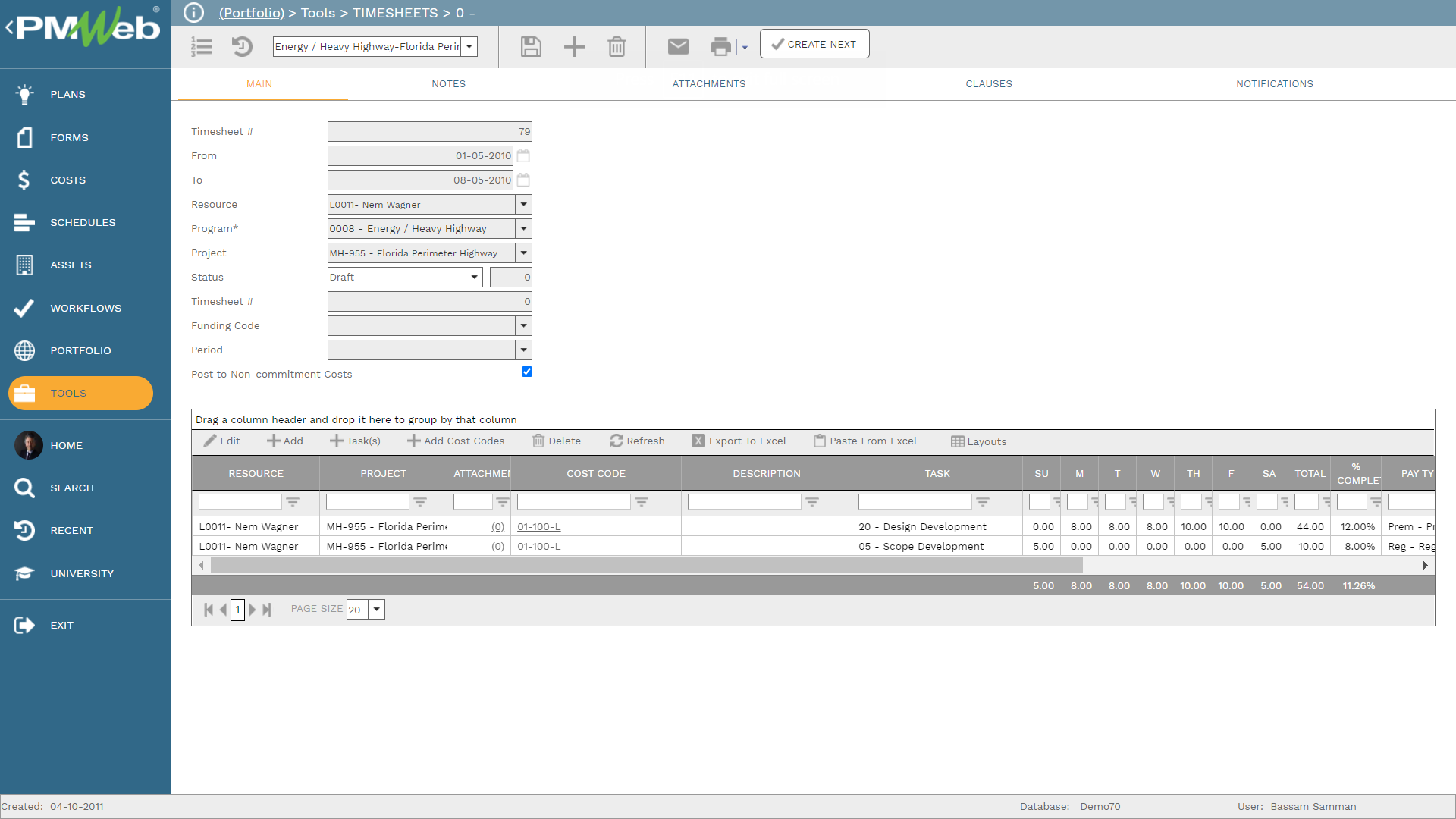 The captured information will enable the professional services to have a report that will compare the resource hours and associated cost estimated for each deliverable, deliverable price as per the awarded contract, the amount invoiced against each deliverable as well as the amount received against what was invoiced, and the actual resource hours spent to execute those deliverables and the actual cost of actual resource hours spent. Measures and metrics can be calculated from those resource and cost-related values. The report will be structured by the cost breakdown structure (CBS) levels defined by the entity. 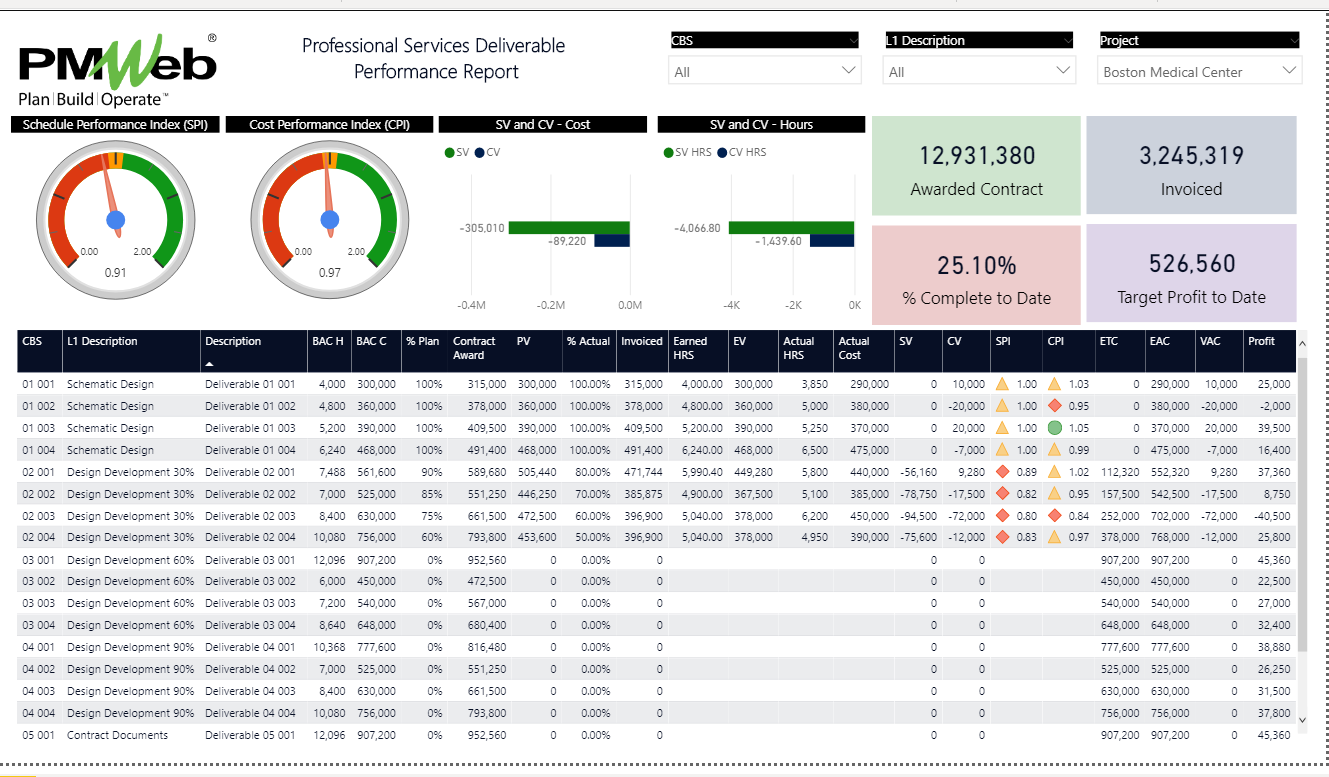