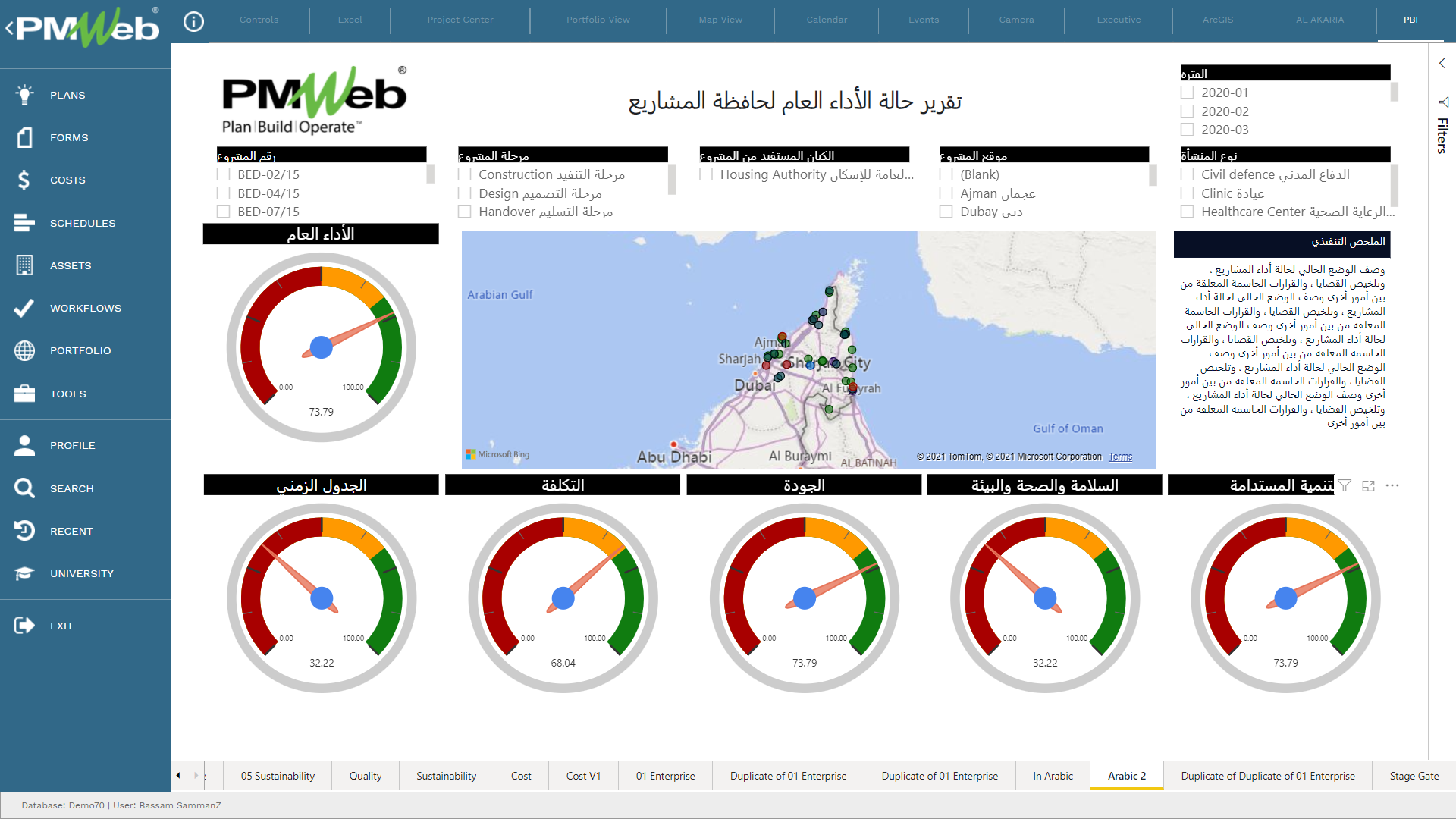 One of the key challenges that face many public sector entities in the Middle East is the absence of project management software applications that are compliant with the formal communication language of those countries, being the Arabic language. The requirement is not only to input the data in Arabic but also to have the software user interface in Arabic. This is true for many countries across the globe where there is a need to have project management software applications localized to meet the requirement of using the country’s formal language. Another challenge that could be more applicable to a few countries including those in the Middle East region is that the individuals involved in delivering capital construction projects, and in particular those who hold middle and senior positions, find difficulty in using input forms that they are not familiar with like those of most software applications. In other words, they need to have input forms that are similar to the forms that they are used to having. This makes the adoption of technology more acceptable to them and will reduce their rejection as well as the objection to the digital transformation of their project management processes.

Those challenges might not apply to planning and scheduling, building information modeling (BIM), and other applications for which the users are familiar with the English language and therefore the application’s interface language can remain in English. Nevertheless, for project management information systems (PMIS) like PMWeb, the requirement for an Arabic language interface becomes a must requirement and not an option. Therefore, a PMIS that supports having the Arabic language as one of their user interfaces as well as allows creating input forms in a format that is familiar to what those individuals are used to having is of great advantage. Without a PMIS, implementing project management best practices for delivering capital construction projects will become impossible to achieve.

PMWeb is a PMIS application that has been designed with the localization requirement being an integral part of the solution. In addition to the option of having a PMWeb user interface in any language including non-Latin languages like the Arabic language, the visual custom form builder allows public sector entities in the Middle East region to have the input forms for all project management processes in Arabic as well as in the exact format that the project team is used to have. This is very critical in avoiding rejections and objections by the project team for not using a PMIS giving the excuse that they have important tasks to be performed rather than becoming an IT professional to do so.

For example, the form for Project Schedule Review Checklist is a very simple form that has a predefined checklist of all items that need to be checked and reviewed by the assigned project team member. The form will have predefined data fields to select possible values from. 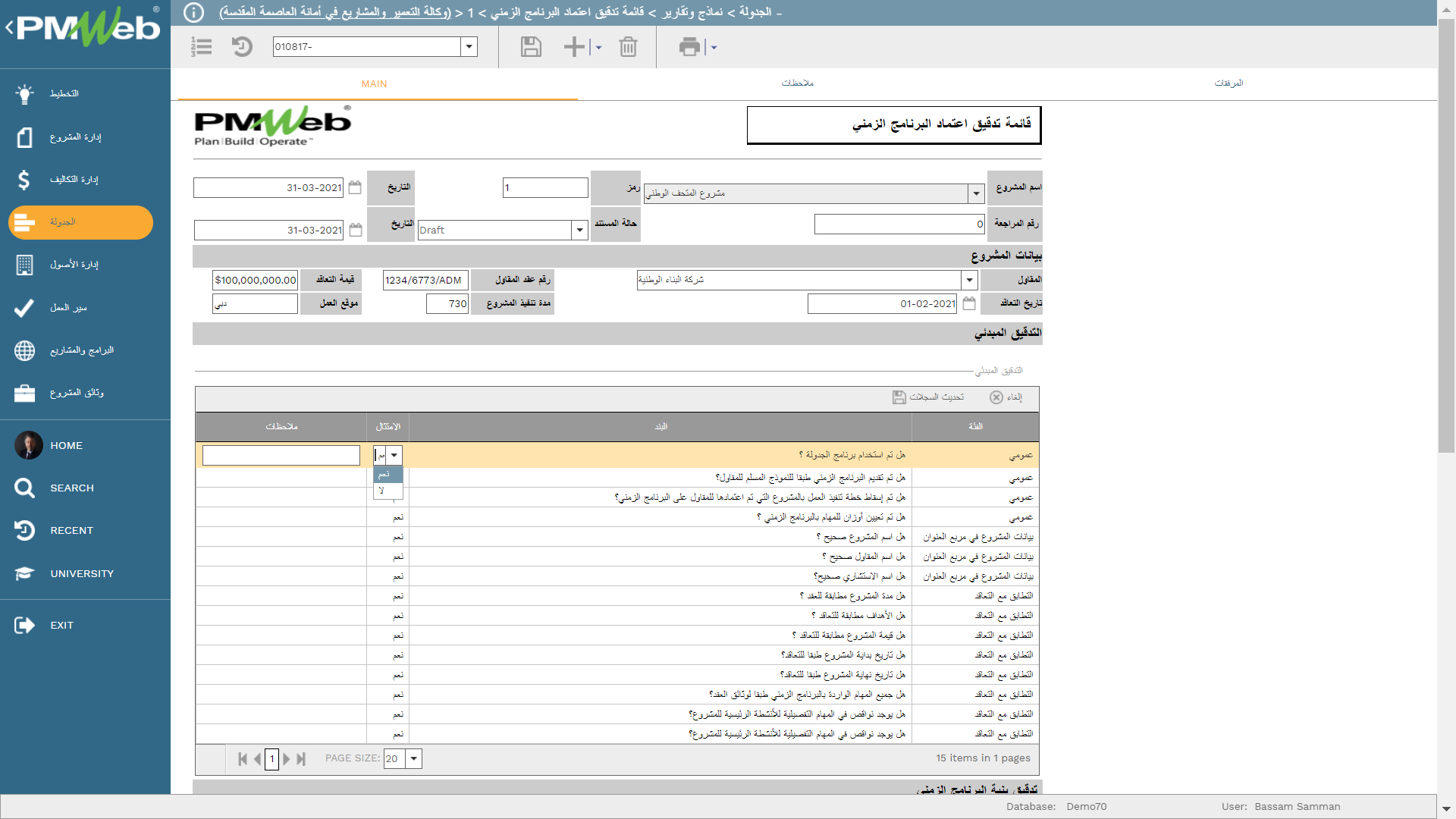 Those custom forms can be also designed to incorporate the project’s contractual requirements when taking actions that could have implications on the obligations and entitlements of a contract. For example, the Non-Compliance Report (NCR) is a very important business process where the rectification of the non-compliant action could result in additional costs and delays. Therefore, it is highly recommended that the NCR form includes a list of all possible reasons that could make it necessary to issue the NCR. Not only this will eliminate objections that could be raised by the contractor but also it is a proven method for transferring knowledge to the public sector project team members. 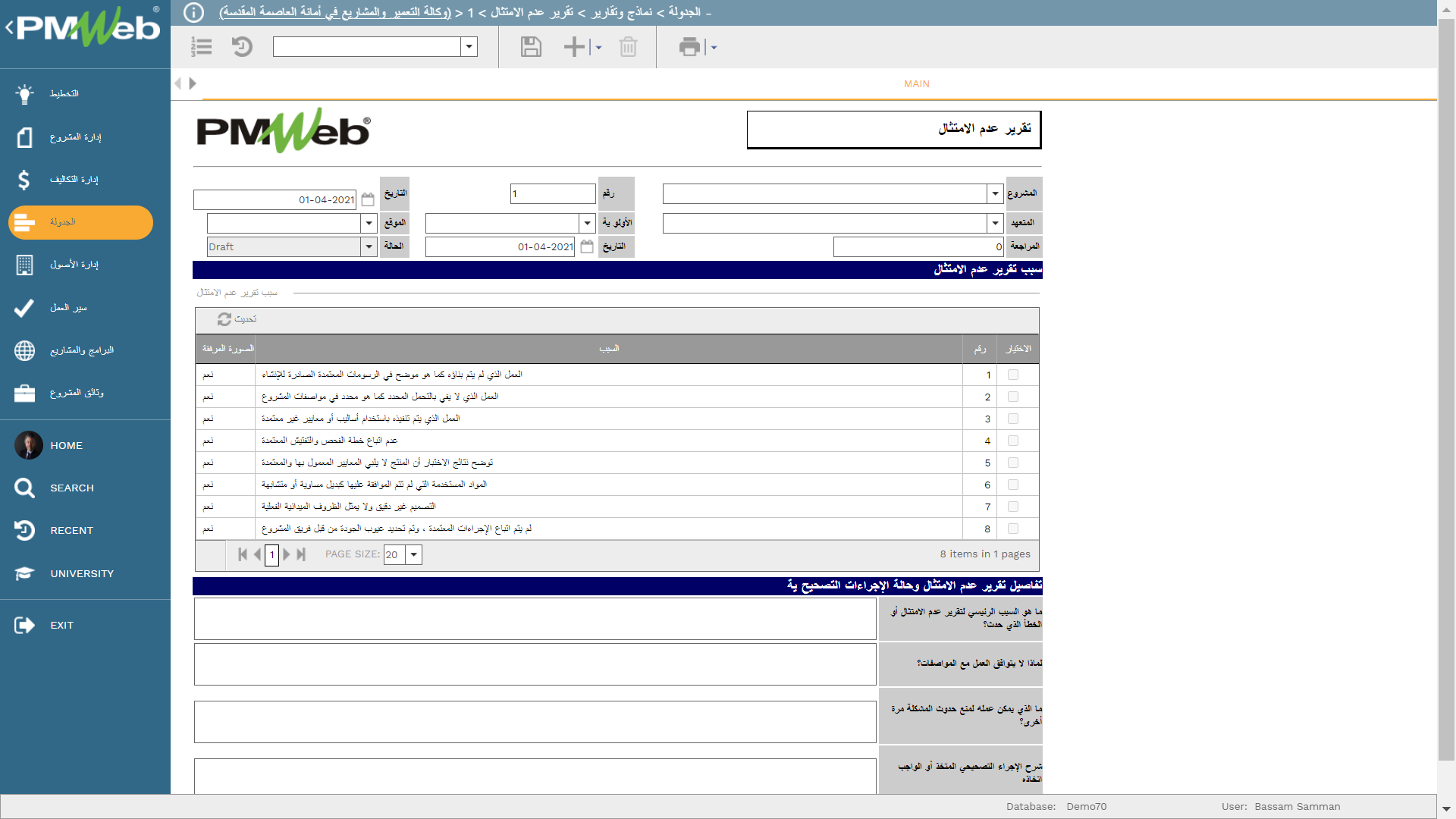 The same also applies to business processes that require compliance with the project specifications which are usually drafted in the Arabic language. Another challenge that could be faced in Arabic language specification is that they could differ from one country depending on the building codes and standards adopted in the country. In other words, those WIR forms could differ from one Arabic-speaking country to another.

The Work Inspection Request (WIR) form should be made specific to each specification section and items to be inspected. Not only this will ensure compliance with the project’s specifications but also become an excellent tool to transfer knowledge to newly graduated engineers when they are assigned site inspection tasks. This will also help in avoiding many of the wrong actions and decisions that would eventually lead to a dispute. 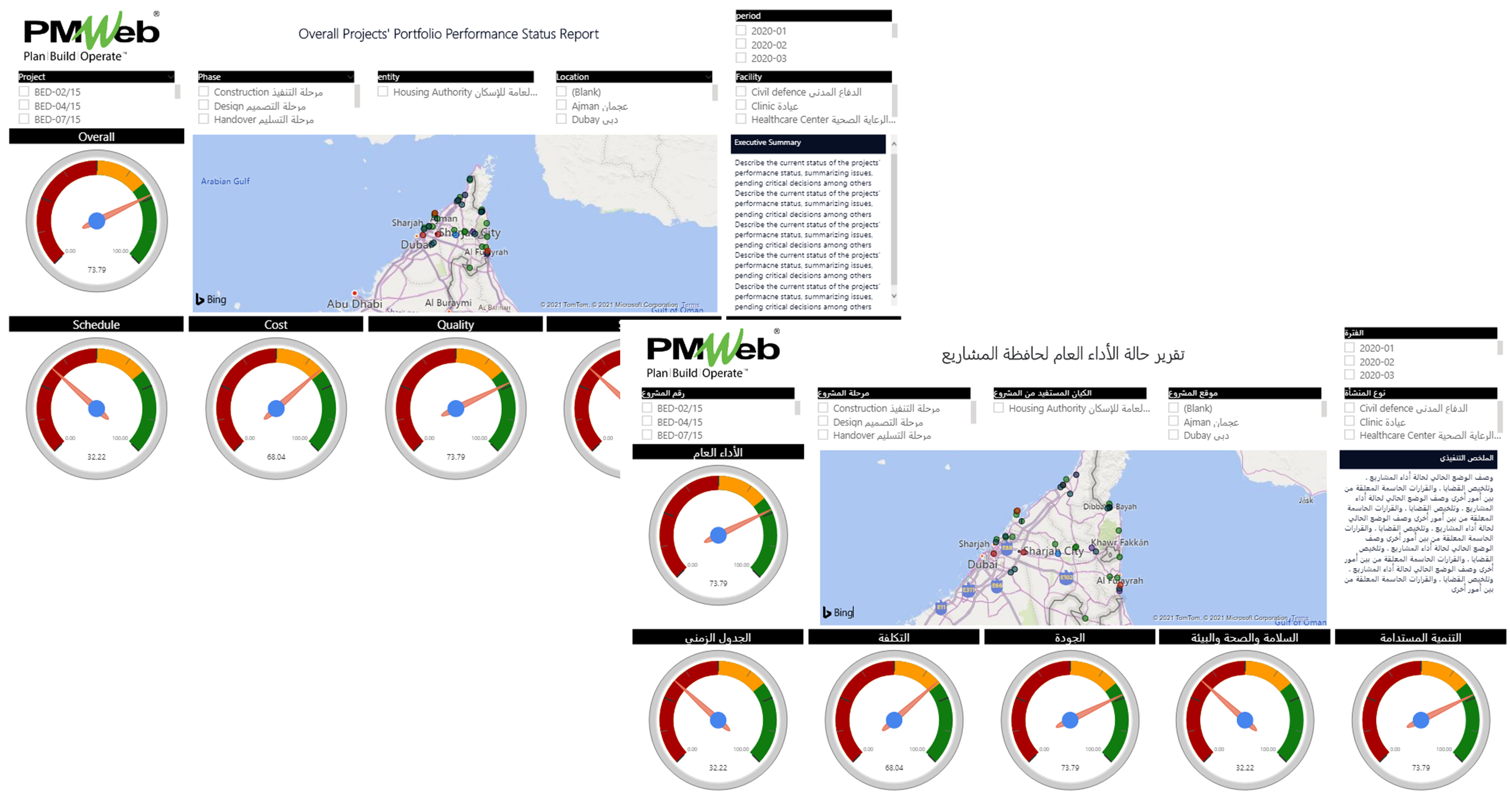 Now, of course, there will be some processes where in addition to the Arabic language, the English language will be needed. Those are the project management business processes that involve other departments or entities for which the individuals employed by them are non-Arabic speaking. For those business processes, the input form can be made bi-lingual to enable Arabic and Non-Arabic individuals to use the same input form. 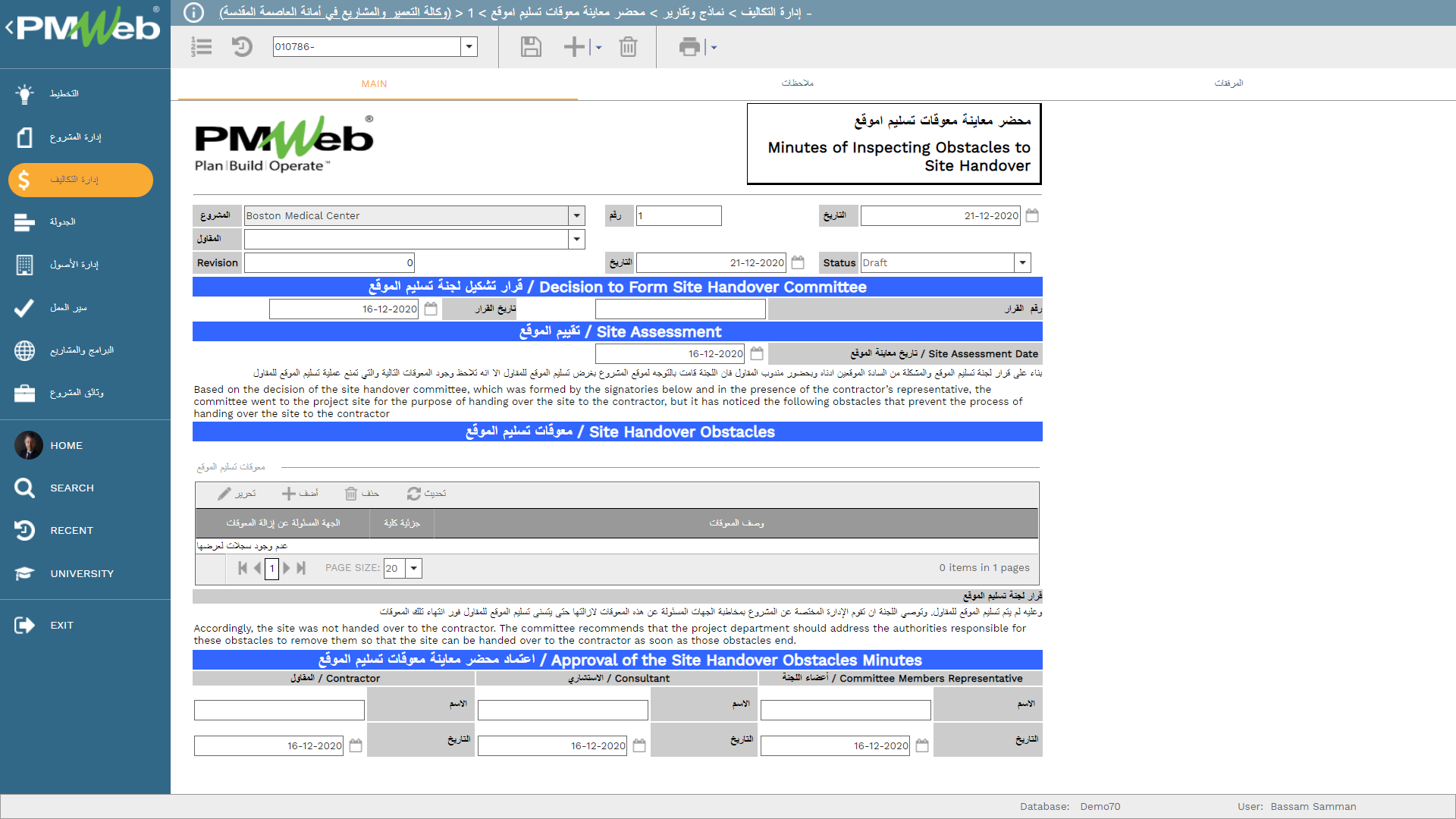 Sometimes those public sector entities might need to use the English language as their formal project communication language especially for large projects and for which international consultants and maybe international contractors might be the entities who will deliver the project. Therefore, project management business processes will be in the English language, nevertheless, the public sector entity might require that the project performance report have two versions, one in English and the other in Arabic. For the currency, numeric, and date fields there will be no issue in the Arabic report version as those can be taken care of by the PMWeb report writer. The same would also apply to all common database fields such as project name, location, entities names among others for which the data will be added in both in Arabic as well as English when they were initially to PMWeb application.

Nevertheless, this will not be true for text fields, which although will be few, but a certified and proper Arabic language translation must be provided. Accordingly, a form will be created to capture the English content as well as the Arabic translated content for each field that will be included in the performance report. This translation needs to be meaningful and convey what is being reported and a meaningless word-to-word translation. 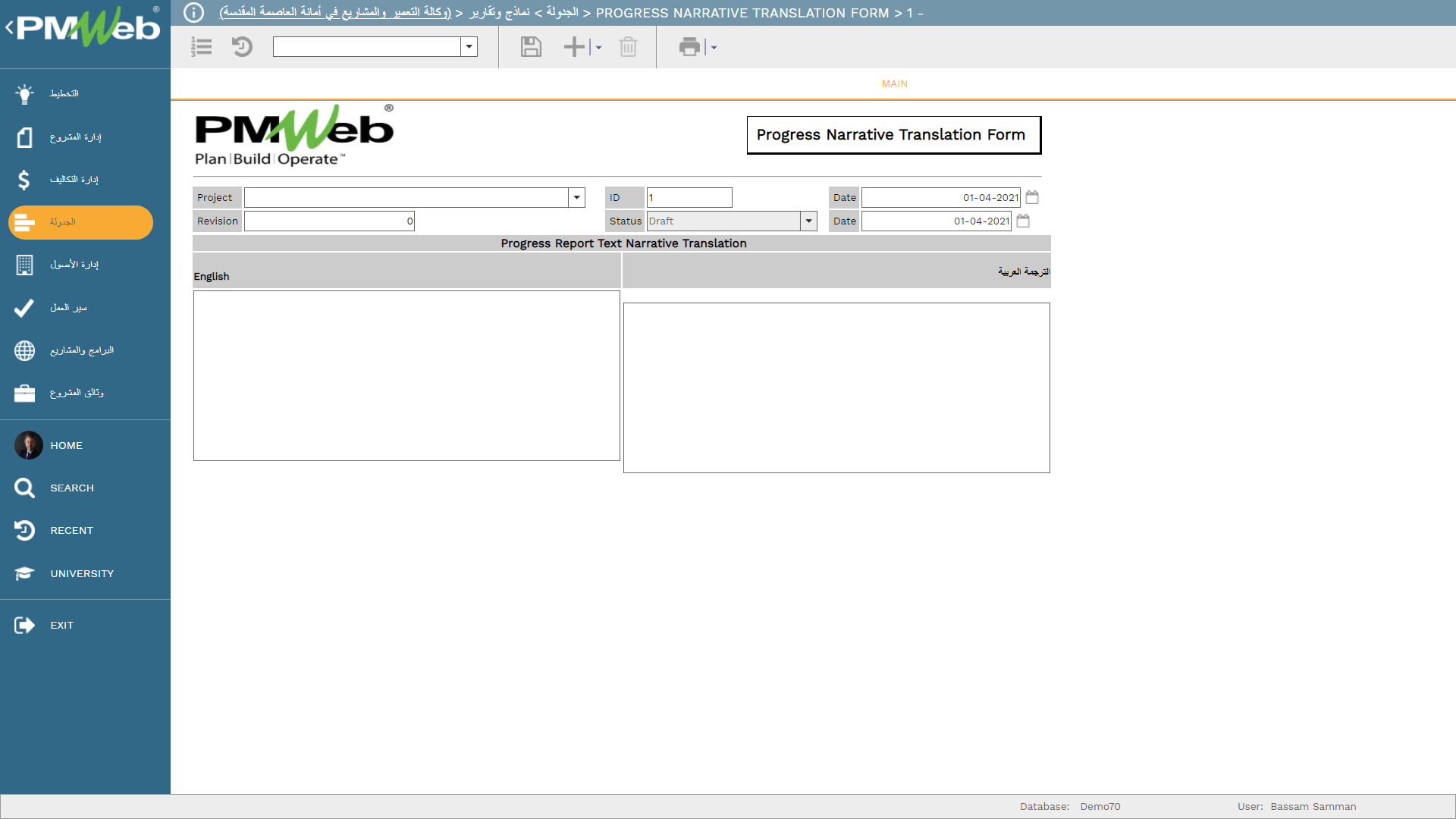 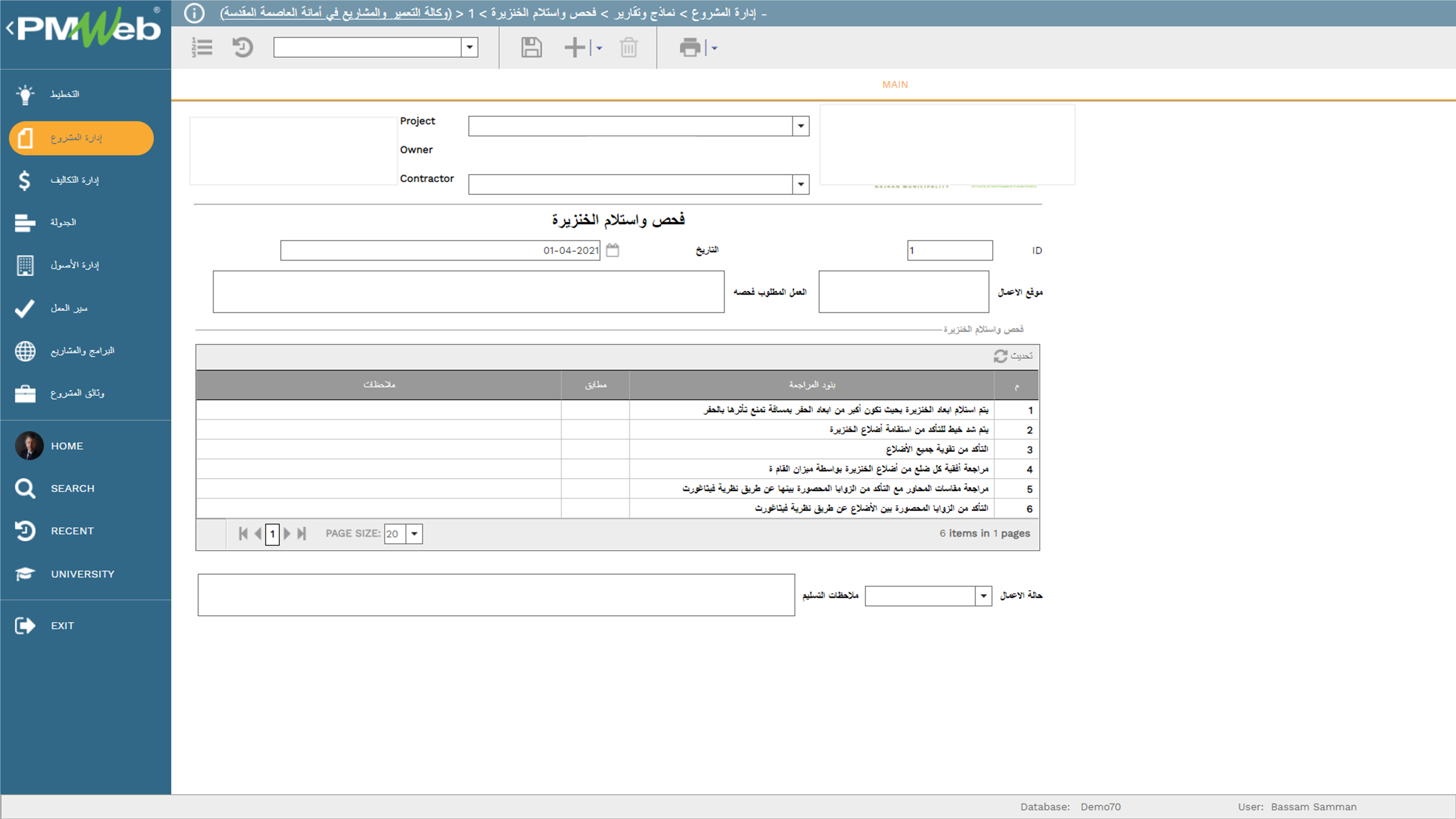 For all the project management business processes created and managed in PMWeb, all supportive documents to any transaction need to be attached to the form. Those supportive documents need to be uploaded and stored in the designated folder or subfolder in the PMWeb document management repository. In addition, links to other PMWeb records and imported MS Outlook email can be also added. 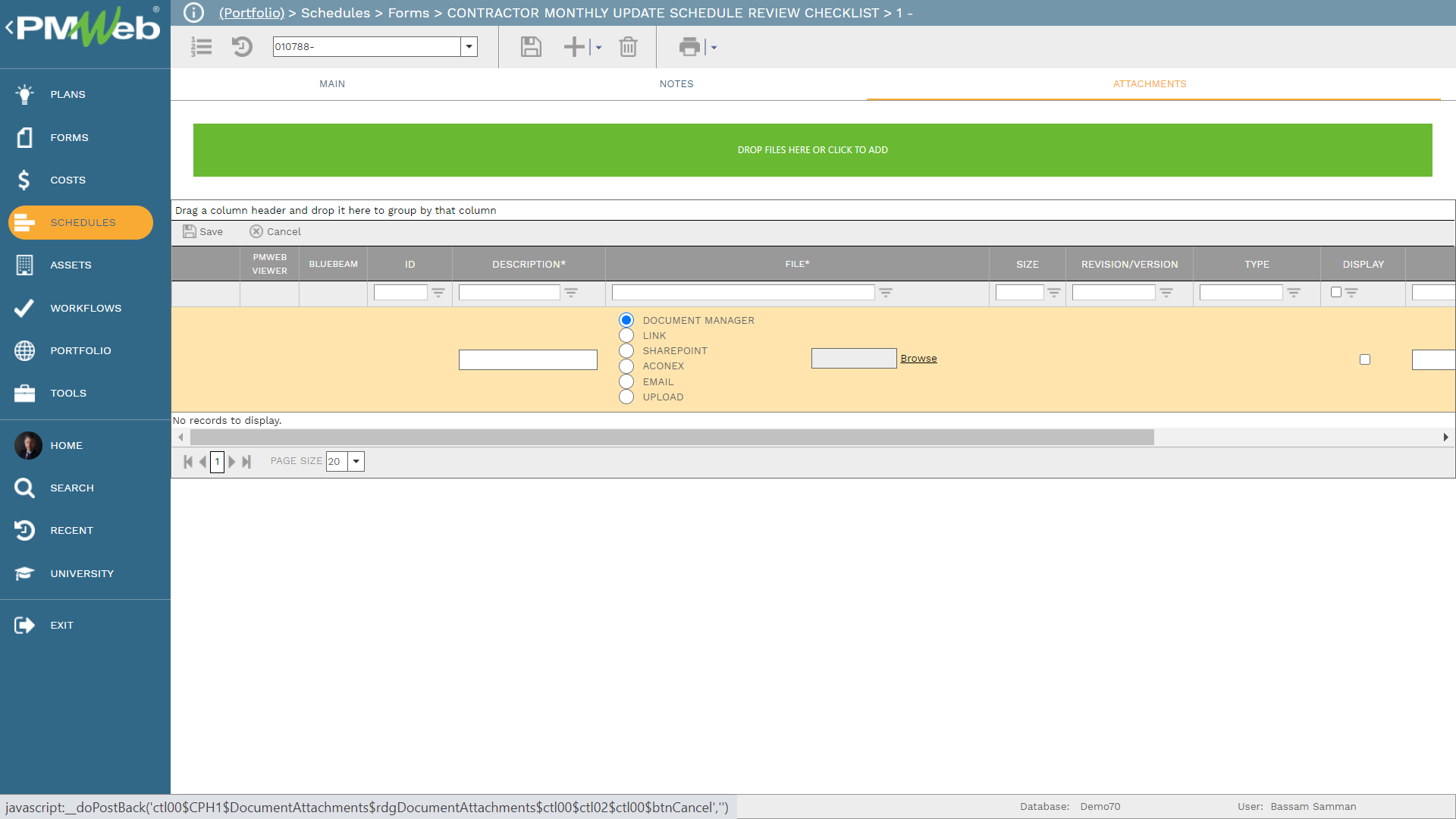 Each project management business process will be assigned a workflow to map the review and approval tasks to be carried out by the different project team members. The workflow will identify the tasks to be performed by each team member, those who need to be copied on the task, the sequence for performing those tasks, the duration allotted for each task, and actions available to be taken at each task. In addition, the workflow might include the conditions needed to create branches for transmitting the process as well as approval authority levels. 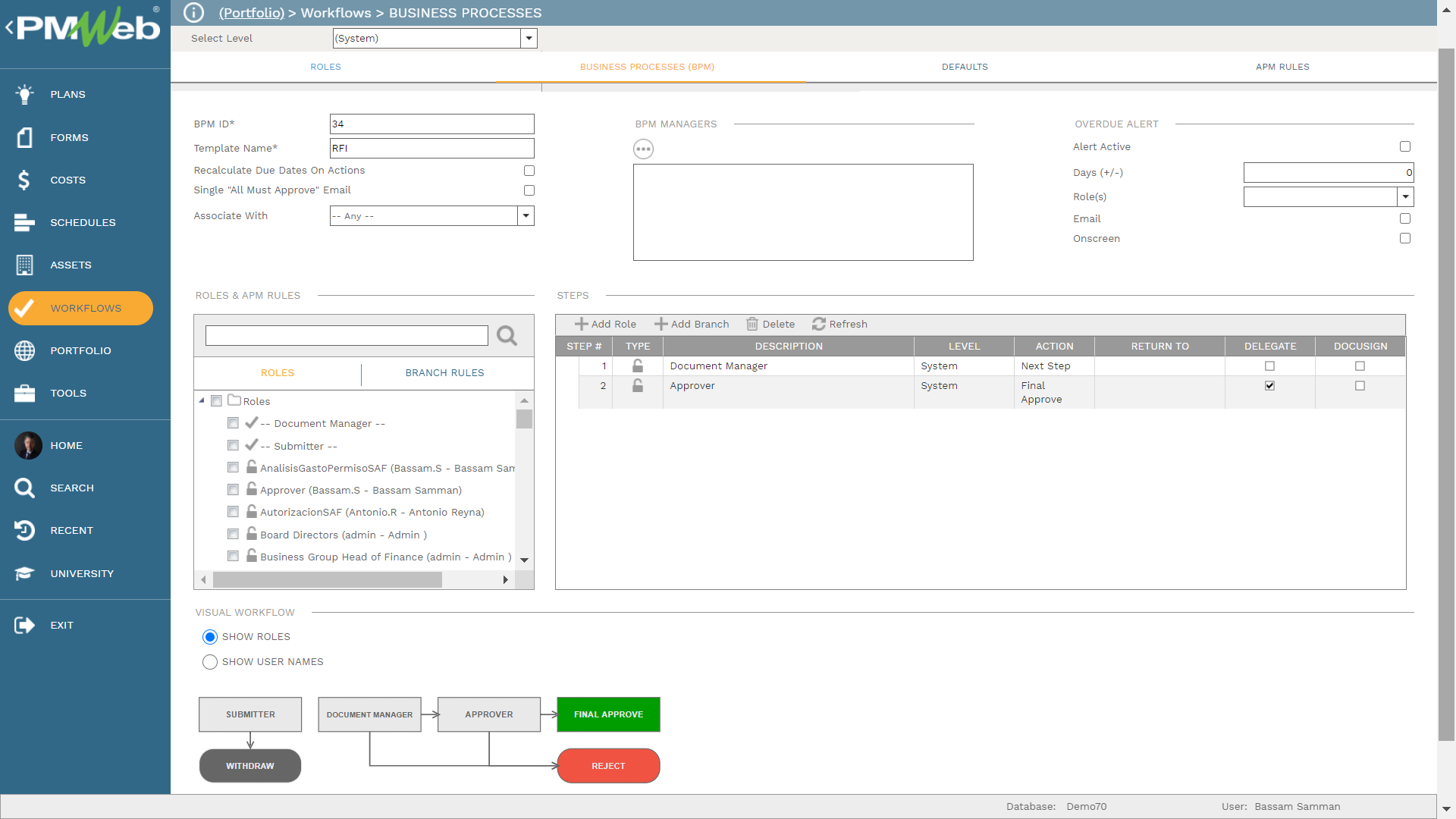