Article #418 How to Do Earned Value Management (EVM) Reporting If You Have to Depend on Others for Project Contract Management Data? 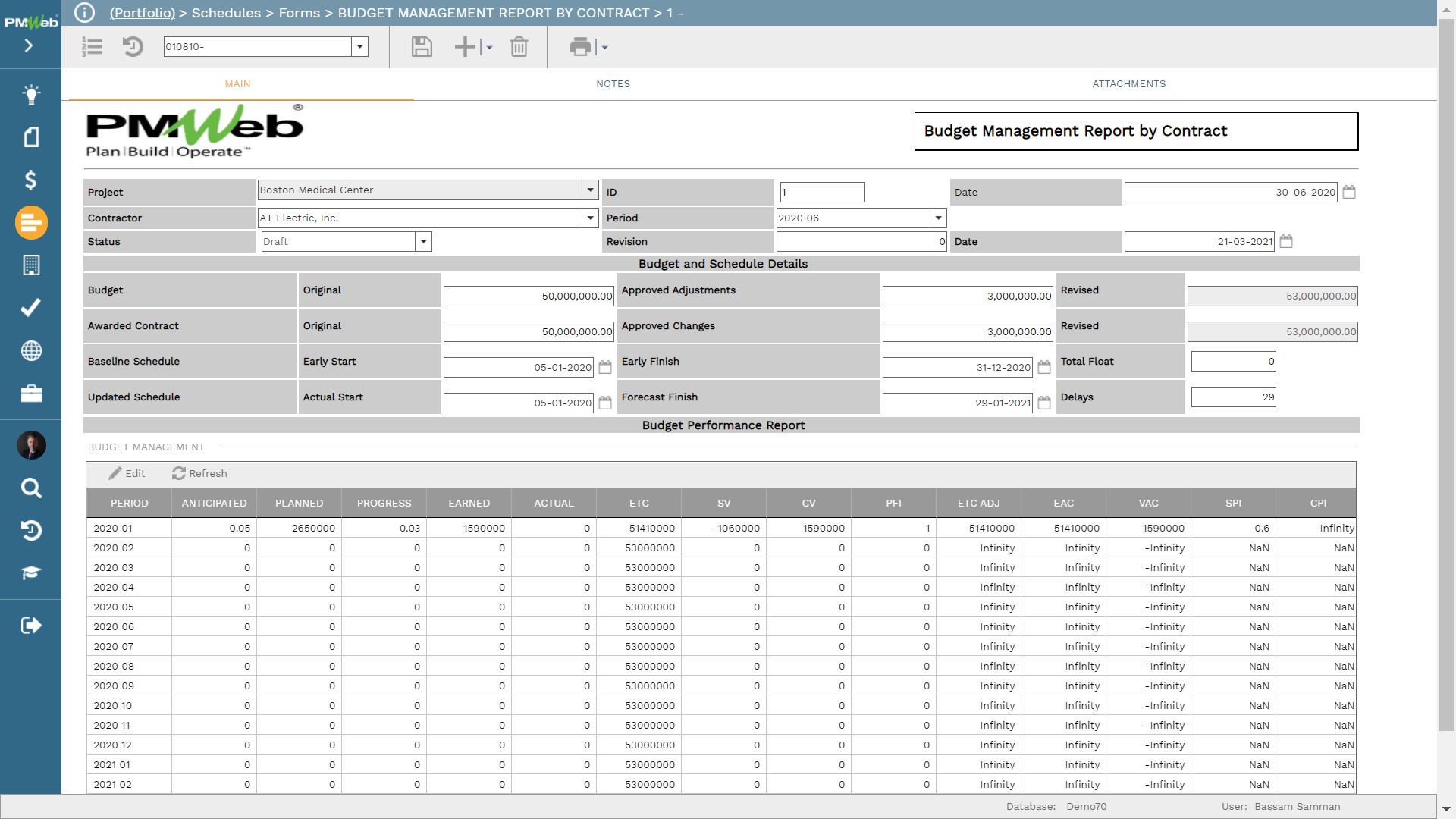 This means that for each contract to be managed and reported on, the financial information that the project team will have access to will be limited to the approved budget, approved adjustments, awarded contract value, approved change orders to date, the actual value of the monthly approved work in place. It should be noted that for lump-sum contracts, the current revised budget should equal the current revised contract value as project contingency and management reserve amounts will be managed by the contract management department at the head office.

The project team will be able to capture the planned percent complete values of each period from the approved baseline schedule as well as the schedule actual percent complete at the end of each period. The team can use a performance factor index (PFI) to adjust the calculated Estimate to Complete (ETC) value. This information along with the provided details above will be the basis for the Earned Value Management (EVM) performance reporting.

Using a Project Management Information System (PMIS) like PMWeb, the contract management processes will not be used but rather a custom form will be created to capture the above data and calculate the EVM metrics. The form header will include details of the project, contractor, performance period, original budget, and approved adjustments as well as awarded contract value and approved change orders to date. The revised budget and contract values will be calculated with this information. In addition, the header will include the project’s planned and current schedule dates along with the current project delay in days. Of course, other fields for contract type, bid package name among others can be also added if needed.

Since the main objective of this form is to manage the performance of the lump sum contracts awarded on a project, the Cost Variance (CV), Cost Performance Index (CPI), and Estimate At Completion (EAC) measures have different usage and calculation than what will be used for on a true earned value management report. The purpose of the Cost Variance (CV) in this form is to calculate the amount of approved interim payment withheld on the entity performing the contract. In other words, the Earned Value (EV) is what this entity interim payment certificate (IPC) should equal to if the work in place was fully aligned with the weighted or cost-loaded project schedule. Accordingly, the Cost Variance (CV) between the Earned Value (EV) and Actual Cost (AC) or actual interim payment certificate is an indication of whether the contractor was underpaid or overpaid for the approved work in place.

In addition, since all of those awarded contracts are based on lump-sum contracts, the Estimate to Complete (ETC) value for each contract should equal the variance between what has been invoiced through the IPC and not the Earned Value (EV) which was based on the project schedule percent complete. The Performance Factor Index (PFI) is a factor that can be used by the project team to adjust the above-calculated Estimate to Complete (ETC) value for potential changes and risks that could affect the remaining balance of the contract. This modified ETC value will be defined as ETC Adjusted.

Accordingly, the Estimate at Completion (EAC) for each awarded contract will equal the total value of Interim Payment Certificates (IPC) issued to date plus the adjusted Estimate to Complete (ETC Adj) amount. The variance between the approved revised contract value, also known as revised budget or budget at completion, and the Estimate at Completion (EAC) value will be the anticipated at completion cost overrun for an awarded contract agreement.

To ensure the credibility of the reported contract performance, each “Budget Performance Report by Contract” form needs to be attached with the baseline project schedule showing the details of the reported planned percent complete values as well as the updated project schedule report showing the basis for the actual percent complete and current delays. In addition, it needs to be attached with the documents that detail the approved budget and budget adjustments. Further, copies of the approved contract approved change orders and approved interim progress need to be attached. All those supportive documents must be uploaded and stored in their designated folder or subfolder in the PMWeb document management repository. 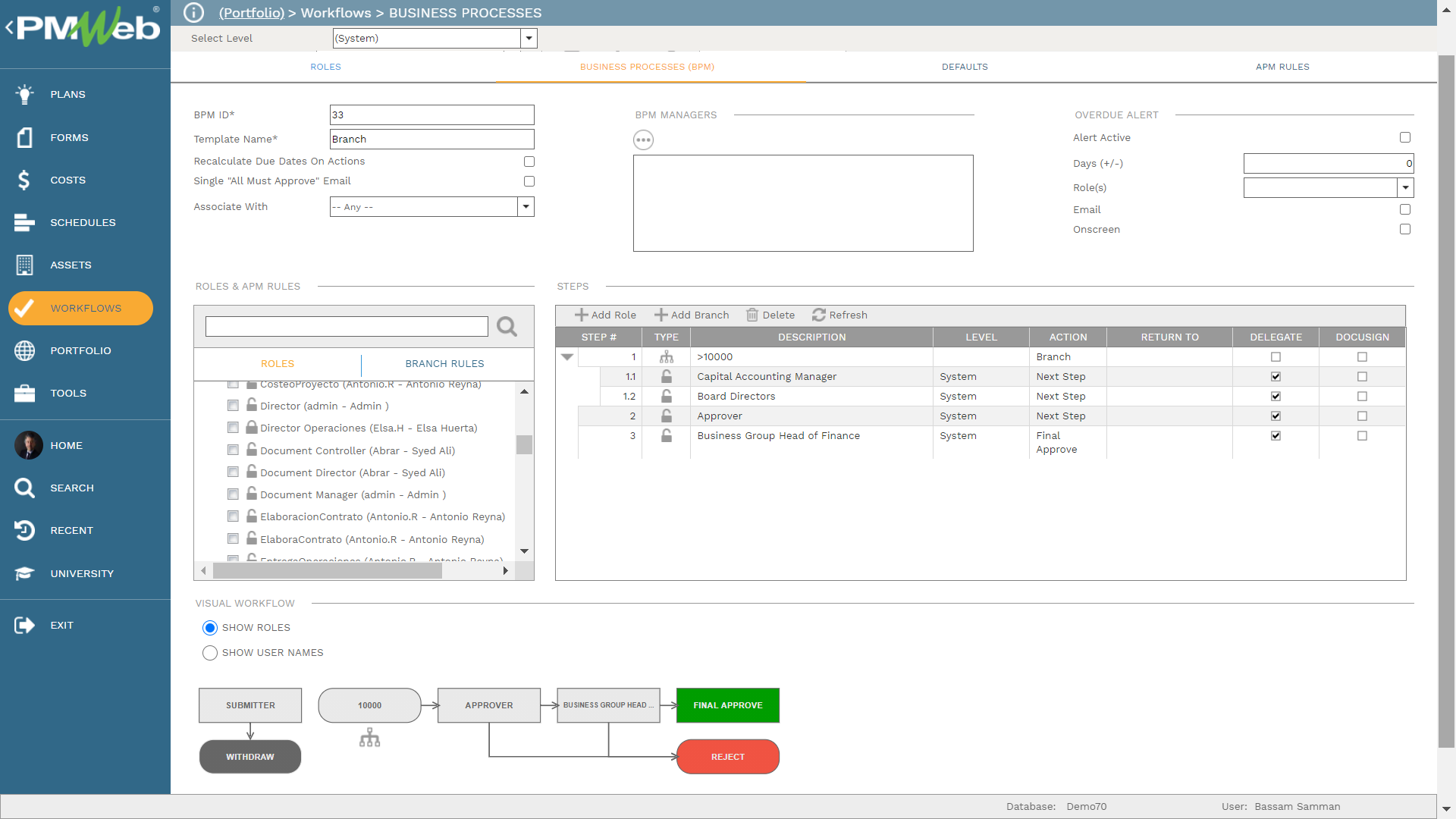 The data captured in the “Budget Management Report by Contract” form will become the basis for Earned Value Management (EVM) report for all contracts managed by the entity whether those contracts were for a single project, program of projects, or even portfolio of projects.

For example, for EVM Performance Report by Contract shown below, the information displayed in the table has almost identical data fields to the “Budget Management Report by Contract” form with red, yellow, and green color indicators added to some of the earned values measures to highlight the performance of each contract at each progress period. The report also includes line visuals to display the last three months’ performance for schedule and cost performance indices as well as the number of delays to the current project completion date. In addition, it has a bar chart visual to detail the original and adjustments to each awarded contract. The report also has two filters to select the projects and contracts to be reported on and the periods included in the tabular report. 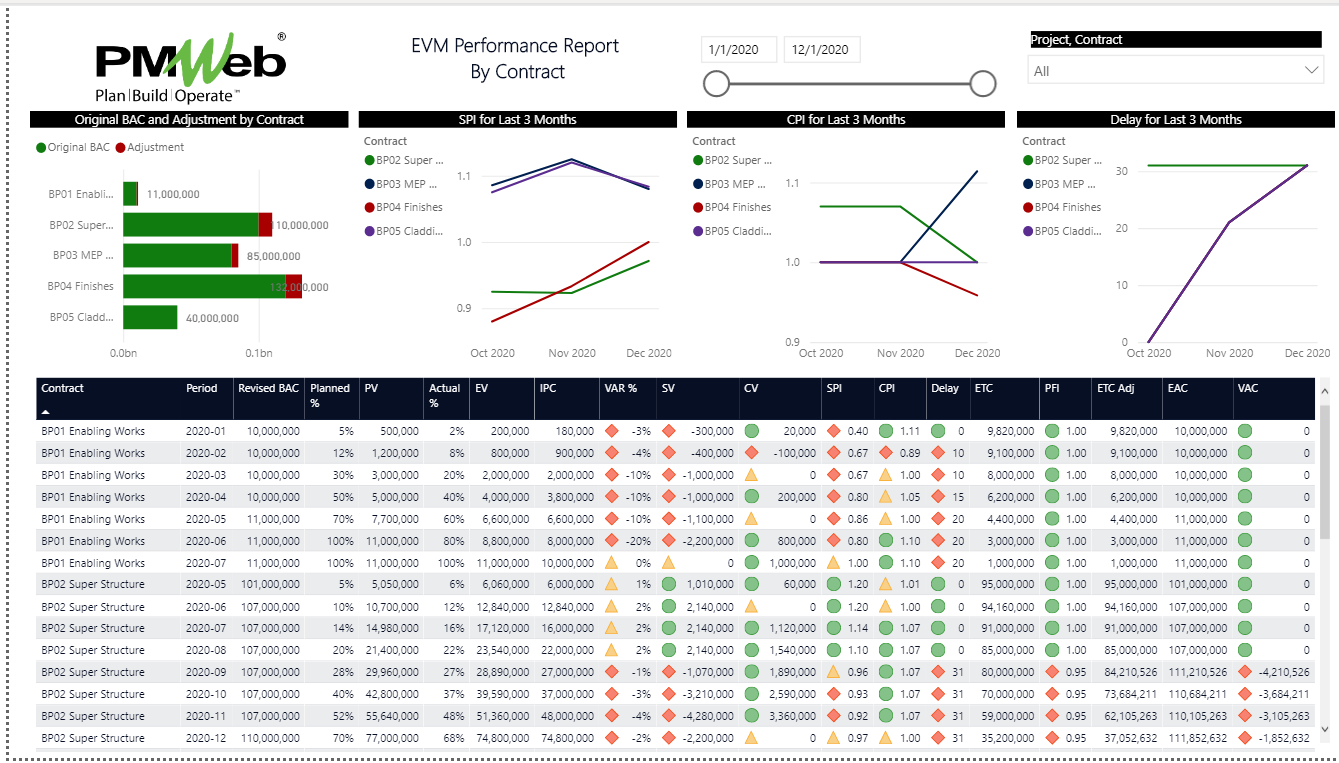