Article # 365 On Capital Construction Projects, Why Contractual Letters Should be Managed as Forms and not as Correspondence Letters?

For project owners, engineering and supervision consultants, project management consultants, contractors, subcontractors and other entities that are part of the delivery of capital construction projects, have the need many to issue letters addressing the different obligations and entitlements that are part of their signed contract agreements. The content and wording of those letters is very critical and needs to be properly drafted to protect the contractual rights of the issuing party while respecting the contractual rights of the receiving party.

Many of those entities have created templates for those contractual letters so they can be used by their project management team across their projects’ portfolio when needed. Those letters will include reference to the contract agreement clauses, for example the FIDIC contract clauses, that they relate to. Of course, those letters would have a number of fields that need to be completed before they can be formally issued. Some of those fields are common to all letters such as project reference, contract reference, contacts of the issuer and the recepitent, date, reference number among others. In addition, there are fields that could be specific to each specific letter. Further, they will include details of the circumanstes that made it necessary to issue those letters. Finally, those letters usually need to be formally reviewed and approved by individuals who might not part of the project team.

Using a Project Management Information System (PMIS) like PMWeb, each letter type will become one of the project management processes to be managed. PMWeb custom form builder will be used to capture all the common and unique fields needed for each letter type. In addition, it will include a checklist of all items that need to be reviewed, verified and approved before the letter can be issued. Access permission to those fields and checklists can be restricted to their intended authorized individuals. Although the body of the letter will be incorporated in the input letter form, nevertheless, the final output will be created using PMWeb report writer. 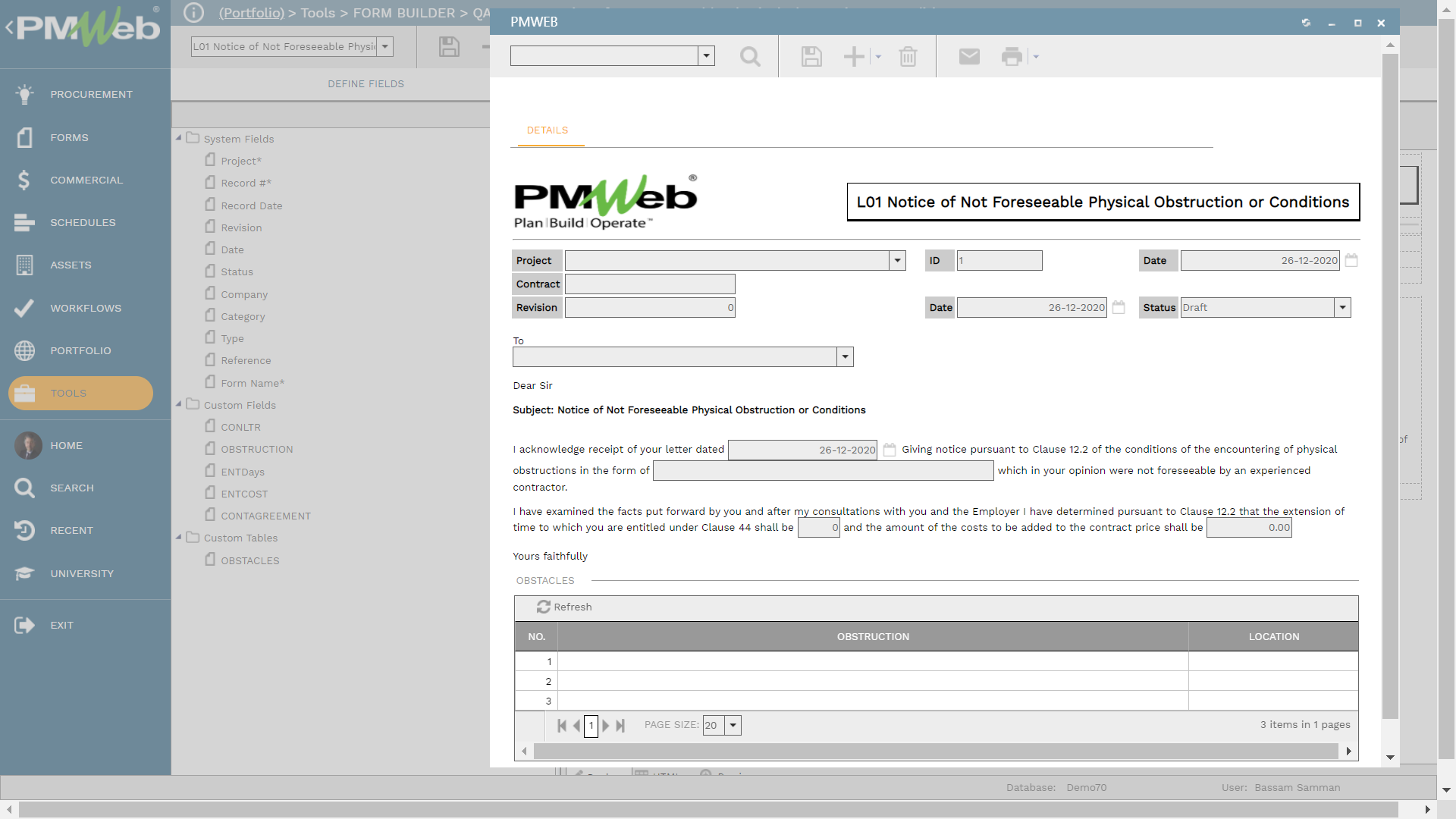 The contractual letter form attachment tab will be used to attach all supportive project documents and records that are related to the issued letter. Those documents could include drawings, specifications, contract agreement, pictures, videos among others. Those documents will be uploaded and stored on PMWeb document management repository. In addition, links to relevant PMWeb records and imported MS Outlook emails will be also included in the attachment tab. 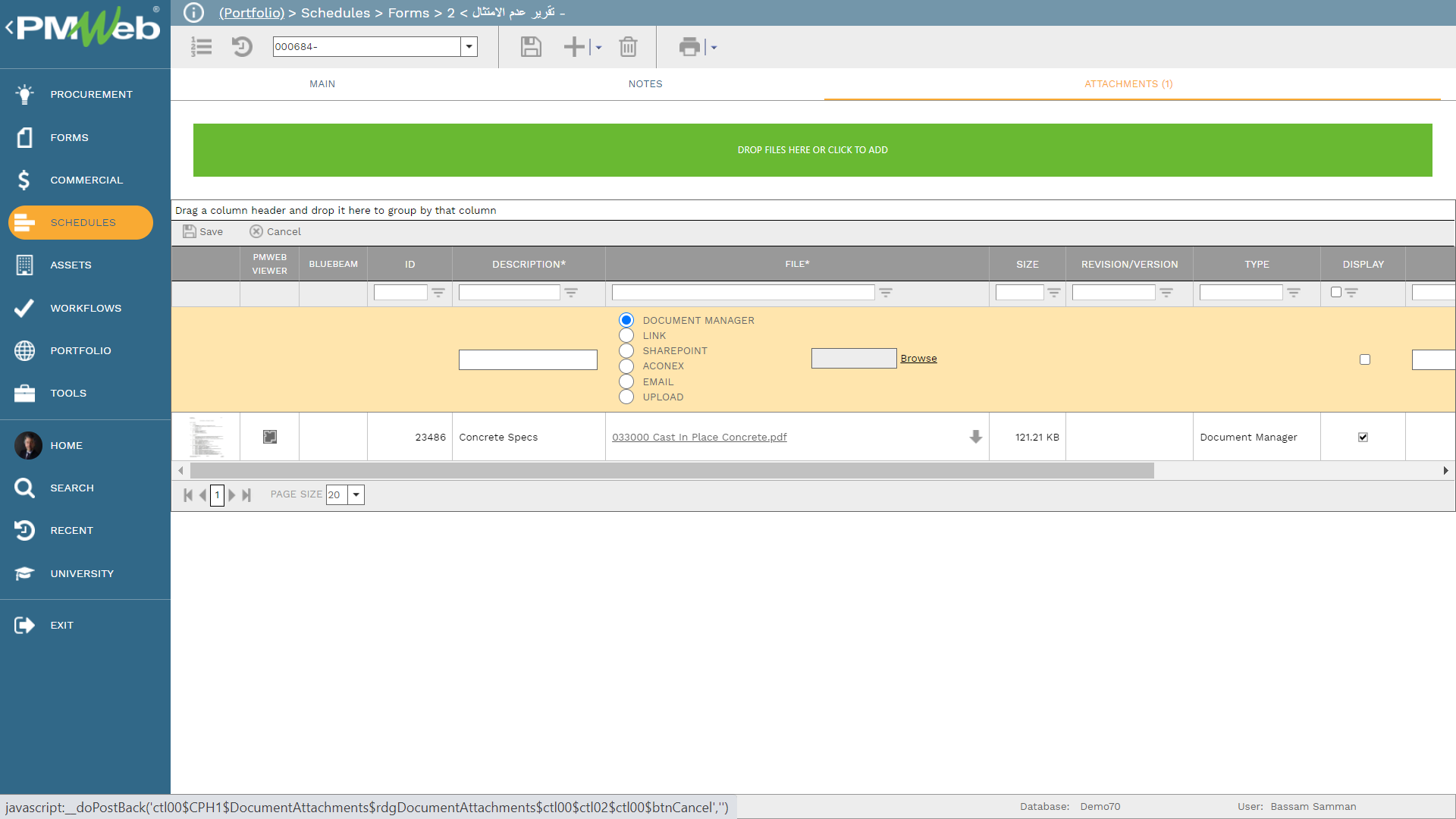 PMWeb workflow will be used to define the workflow tasks for each letter template type. The workflow will detail the responsibilities for performing those tasks, duration allotted to perform each task, available actions to be taken, to which task a process should be returned to if there is a need to resubmit, sequence for performing those tasks and all conditions required for enforcing approval authority levels which are usually detailed in the project management plan. 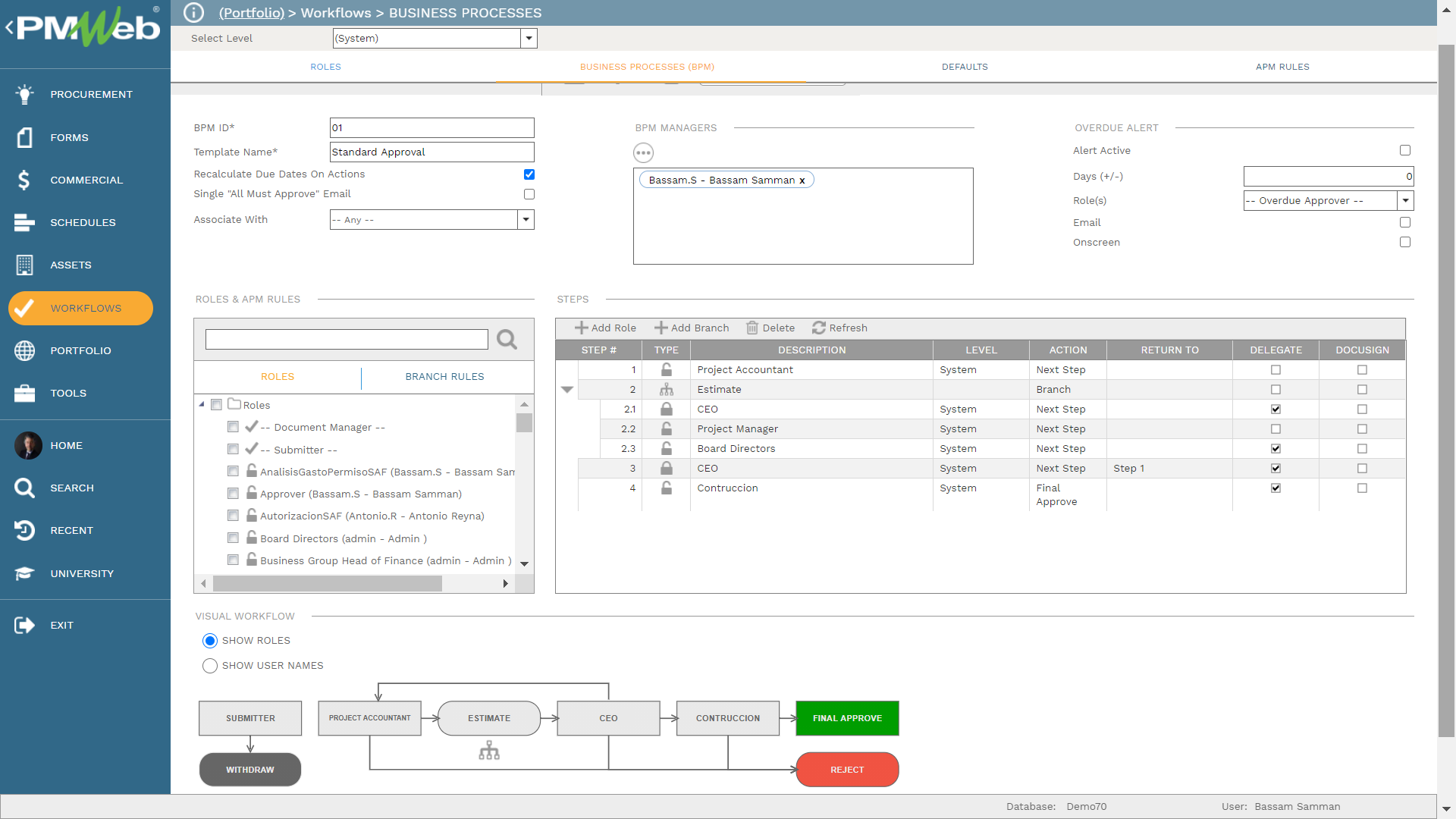 Since some of the individuals who are part of the review and approval workflow process might not be located at the project site, which is by the way is growing due to the work-from-home (WFH) requirement, PMWeb workflow notifications can be sent to those individuals via email. The email templates can be configured in any desired form or format as well as the can be configured to send attachments. Those attachments could be the letter supportive documents, letter output template among others. The email templates can be configured to have buttons to enable performing what is known as “Approve on the Fly” or “Reject on the Fly”. 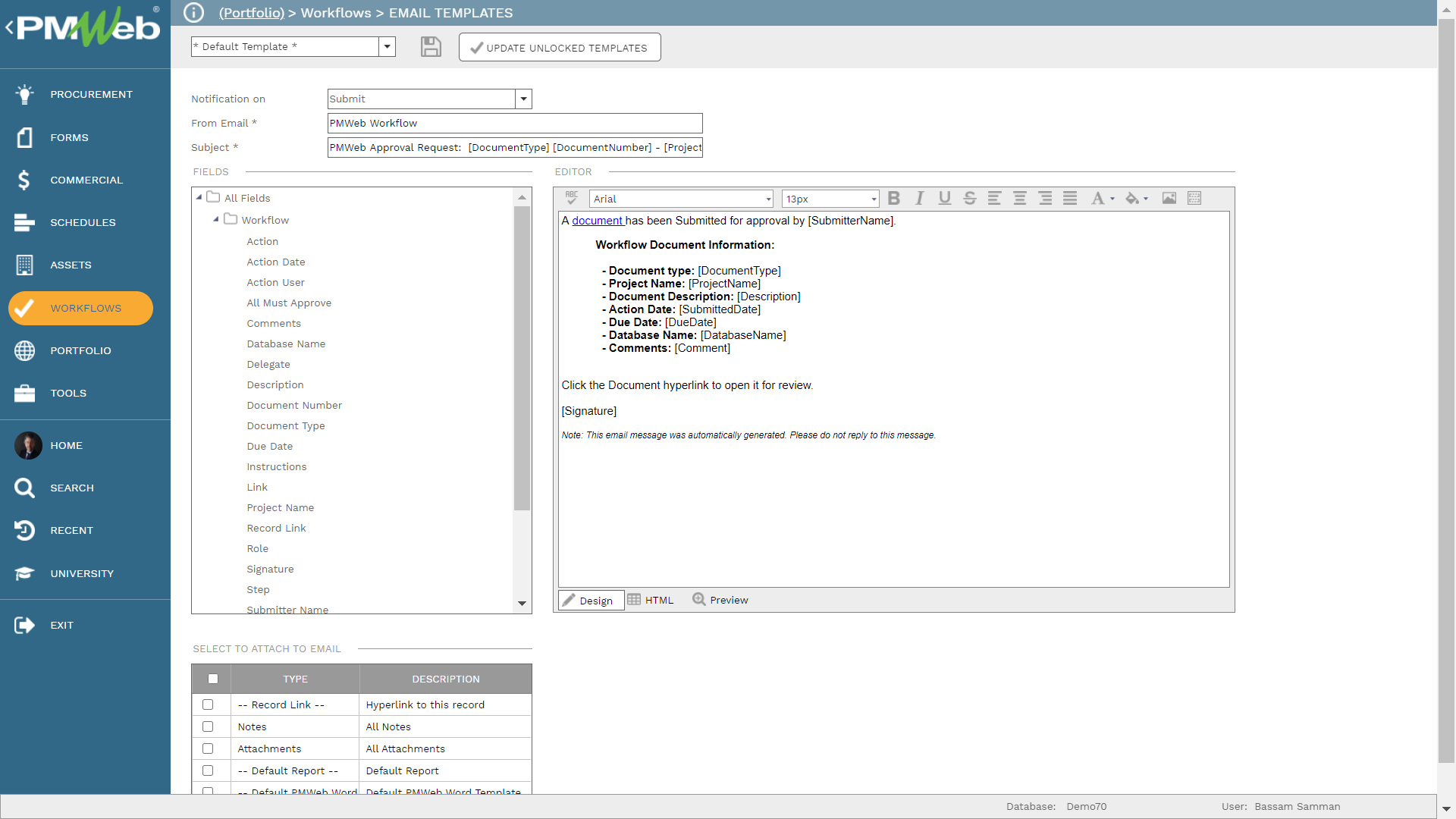 The final output of the letter will be designed using PMWeb report writer for which the output letter format will be in the final format to be printed and issued. The letter template will include the entity branding and other details that are common to other letters communicated on the project. The letter template output can be designed to include links to the documents that were attached to the letter input form. The output firm can be saved in PDF file format to be digitally signed or printed to be wet-signed and stamped.

It should be noted that those contractual letters input forms and output templates can be in any language including non-Latin Languages like Arabic. It is also possible to combine the two languages in the same letter template which is usually needed for some contractual letters. 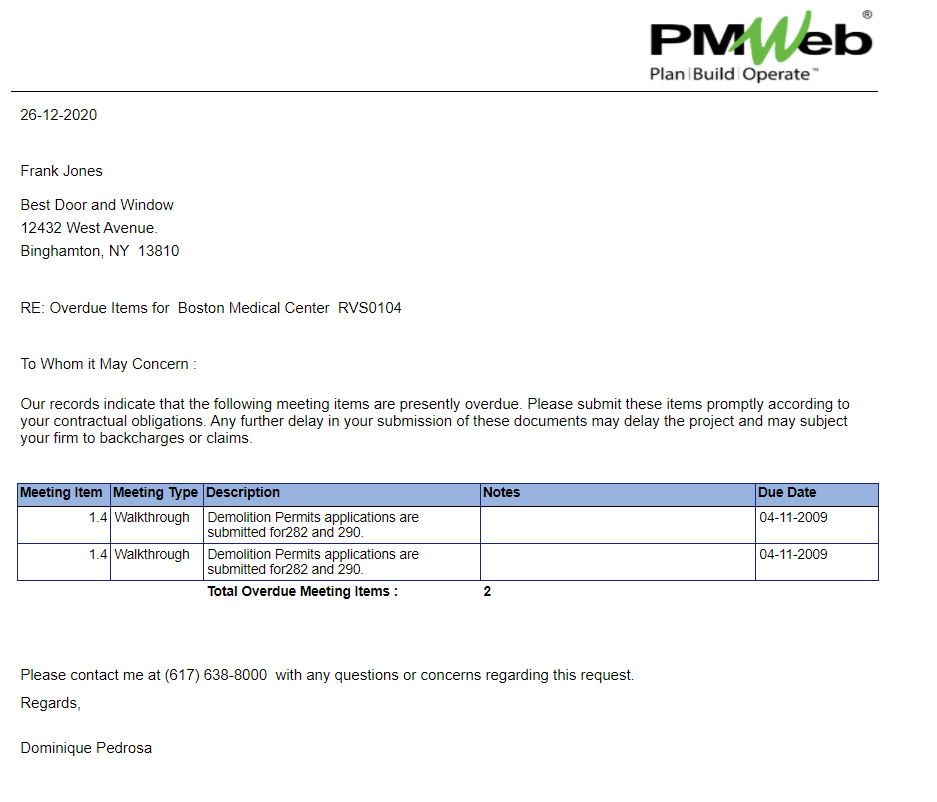