Article #312 Would There be a Day When Financial Regulators Enforce Publicly Listed Contractors to Use Technology When It Comes to Reporting Their Financial Performance on Construction Projects Being Executed?

The recent news of having Arabtec to be placed into liquidation will have its drastic implications on its shareholders and employees as well as subcontractors and suppliers who have payments due from Arabtec. In addition, banks and financial institutions who have provided credit finance to Arabtec will be also adversely impacted. For me personally, this makes me feel very sad as I know Arabtec since the days they had their modest headquarters in Sharjah until they became one of the top contractors in the UAE and the Middle East region.

Arabtec and similar to other major contractors in the UAE, although have invested in technology as it relates to their head office operations including financial, warehouses, plant, HR, cost estimating, BIM among others, nevertheless, when it comes to projects, their investment in technology will be limited to Primavera P6, MS Office and maybe some kind of a Document Management System if this was specified in the awarded contract. For the majority of contractors, technology that relates to project management is considered as an expense that they will try their utmost to eliminate. What is surprising to all, is that they fail to understand that delivering the awarded projects successfully is what will make or break the Contractor.

Of course, the lack of using technology when it comes to the delivery of construction projects is not the main reason that caused the failure of Arabtec and most probably other Contractors very soon. During the past 20 years, the UAE construction industry has gone into four phases. The first is the phase before the 2008 global financial crises. During that phase, project owners would usually beg for contractors to bid on their projects at their own good profit margins. Actually, during that period, any contractor, small or big, performing good or bad, will have a lot of work in hand. The second phase is from 2009 to late 2015 where the oil prices took a deep dive. During that period, only good contractors with close relations with project owners where able to survive. Of course, profit margins were low but to certain extent acceptable. The third phase was from 2015 to 2020 and before the Covid-19 pandemic, were there less projects to be constructed, with very low margins if not zero margins, and delayed payments for completed works. During this phase, very few contractors would have projects to be constructed at unfavorable project margins and payment terms. The last phase is the Covid-19 pandemic era where almost all new projects award came to complete halt and current projects in progress were slowed down or delayed.

Technology, regardless how good it is, could not have changed those facts that led to troubles in the construction industry, nevertheless, it could have divulged the true financial status of projects being executed as well as provide insights to make better and faster improved decisions. In countries were there is no law that prohibits unbalanced bids, assuming that the difference between the revenue earned for completing part of the project scope of work and the actual cost for completing the same scope of work represents the project’s profit for that completed scope of work is completely wrong and misleading. When a contractor prices his bid proposal, the contractor might unbalance the bid to allow for front loading, inside knowledge on changes to the project scope of work among others. Unbalancing a bid will result in having some bid line item overpriced while others underpriced but ensuring the total bid price to be competitive enough to win the bid. In other words, part of the project’s scope of work will have high profit margin while others will have very low profit margin if a not a loss.

Therefore, to be able to monitor, evaluate and report the true project financial status, the contractor needs to consolidate all the data that will be used in managing the project cost and revenue. Those will include the project cost estimate which was the basis for the bid price, budget and all budget adjustments and transfers that will detail the target cost to deliver the project, contract agreement between project owner and contractor including all approved and pending change orders, interim payment certificates and actual payments received against approved interim progress invoices, all bid proposals received from subcontractors and suppliers, all inter-company and external commitments to subcontractors and suppliers for ensuring a full project buy-out including all potential change orders and change orders, interim progress invoices issued against subcontract agreements, purchase orders and inter-company agreements and all actual payments made against those interim progress payments all other non-commitment expenses and actual payment of those expenses.

Using a Project Management Information System (PMIS) like PMWeb will enable the contractor to real-time single version of the truth reporting of the project’s financial performance. PMWeb comes ready with out-of-the-box cost management processes needed to capture all of the above transactions on a single 100% web-enabled platform that can be self-hosted to provide the needed data protection and security.

For each cost management process, there will be an input form where all supportive documents will be attached and relevant records and imported MS Outlook emails will be linked. In addition, each process will have a workflow to formalize the tasks and their sequence for reviewing and approving each transaction. The workflow can also include the conditions needed to comply with the contractor’s approval authority levels. 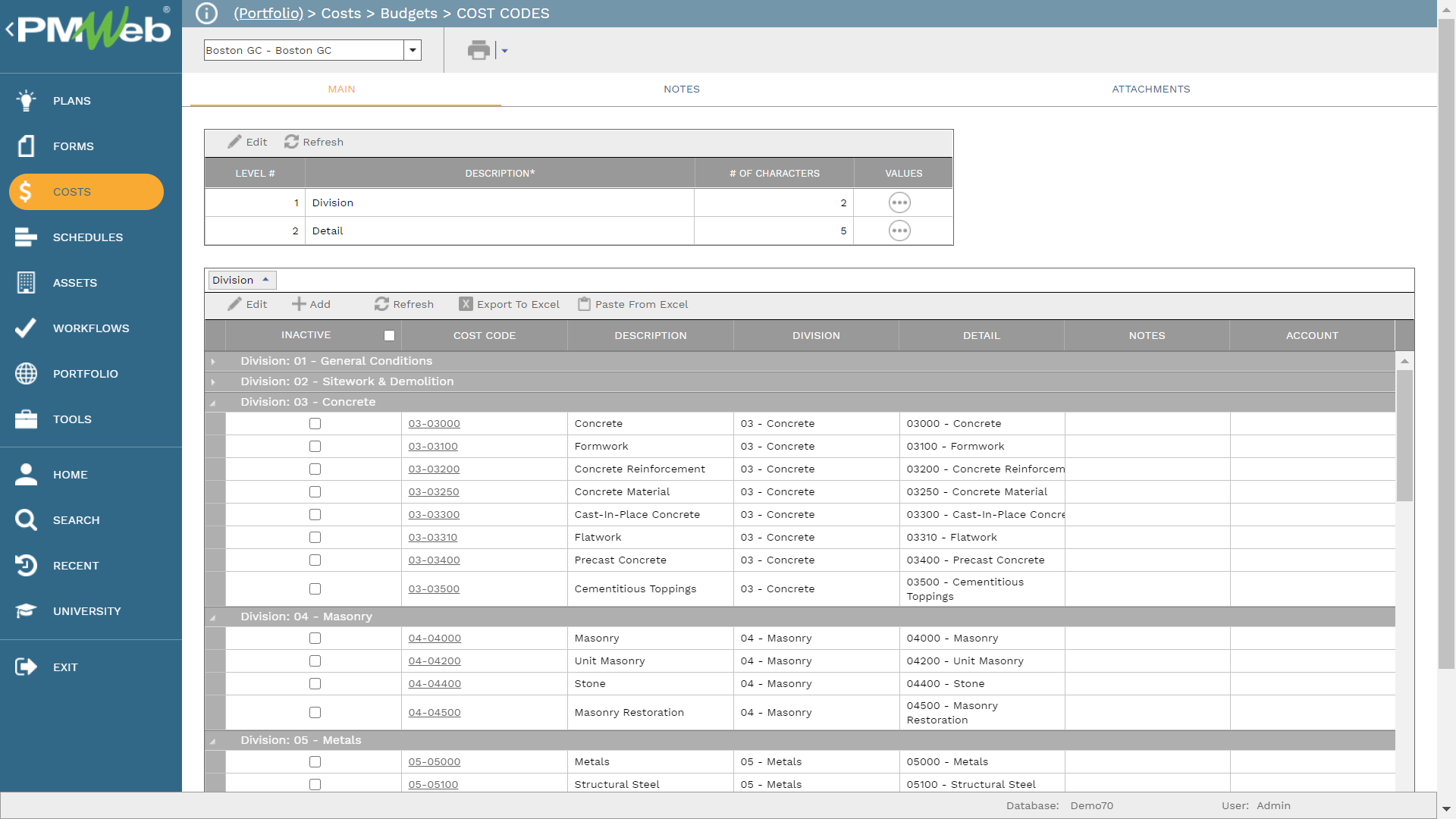 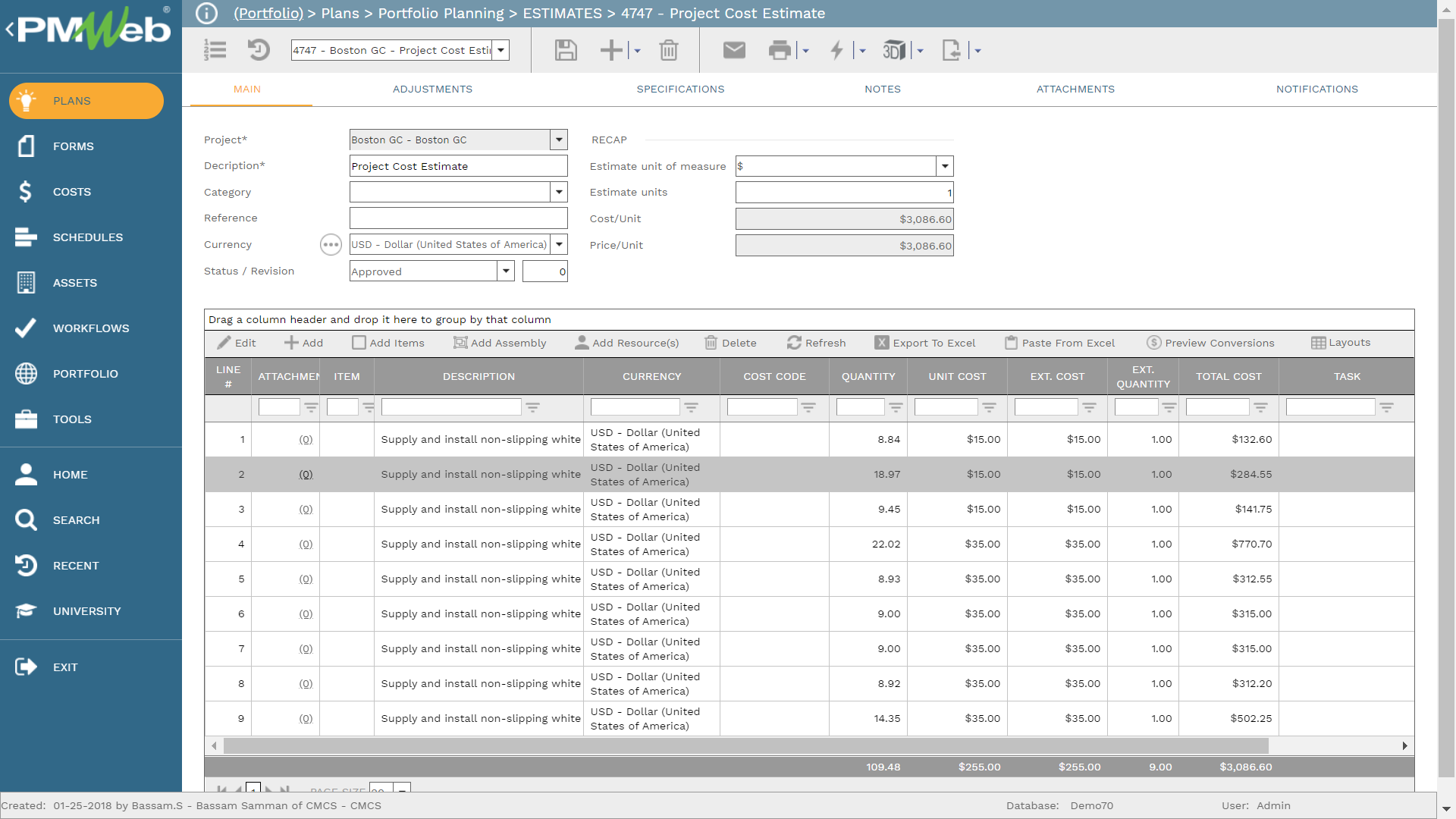 Managing All Proposals Received from Subcontractors and Suppliers 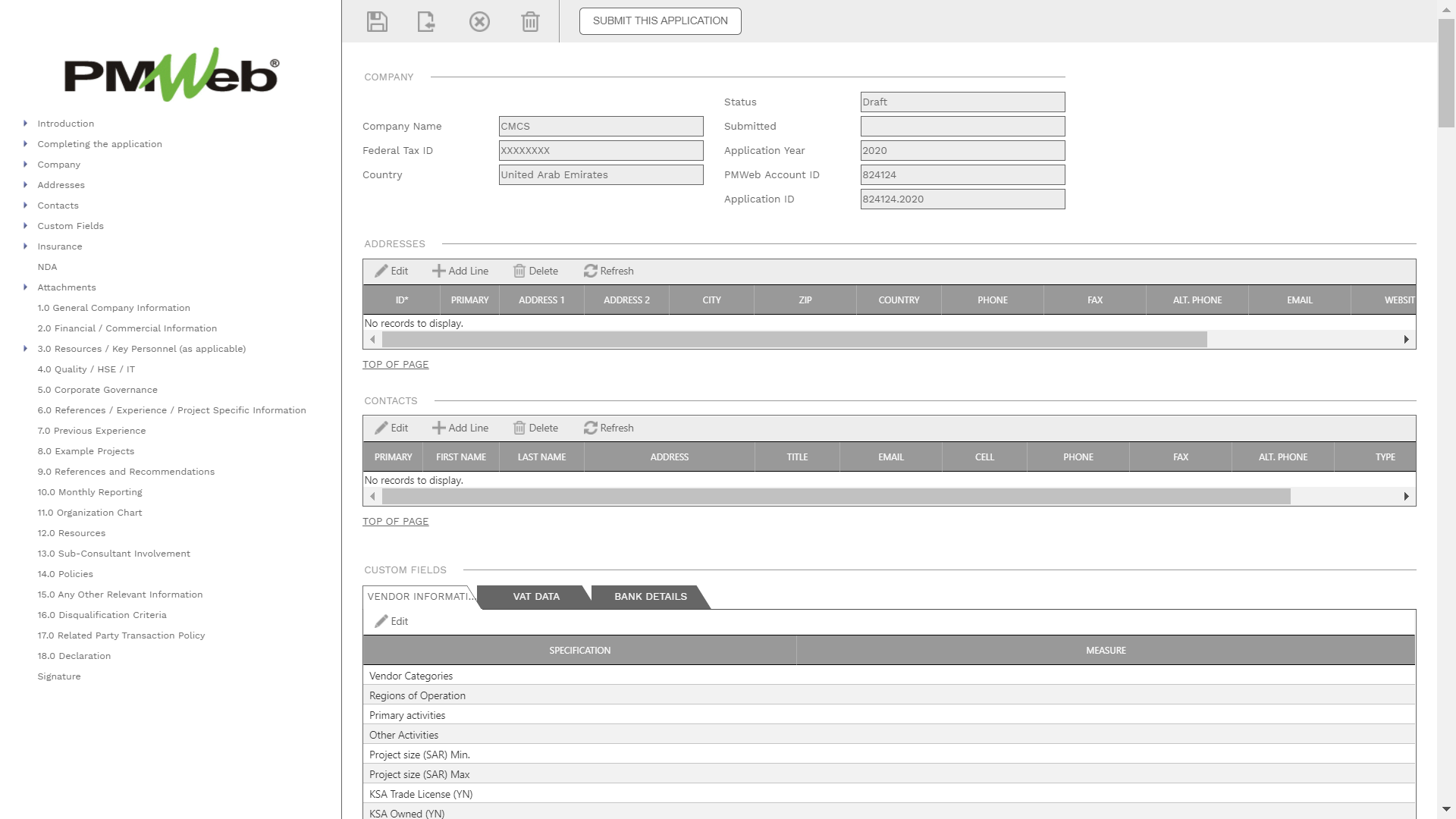 Each generated procurement package will include the cost estimate line items that relate to the outsourced scope of work as well as the list of subcontractors or suppliers who will be invited to bid on this scope of work. The procurement package will also include the required proposals due date and all Non-Disclosure Agreement (NDA) and documents that each bidder must complete when they submit their proposals. 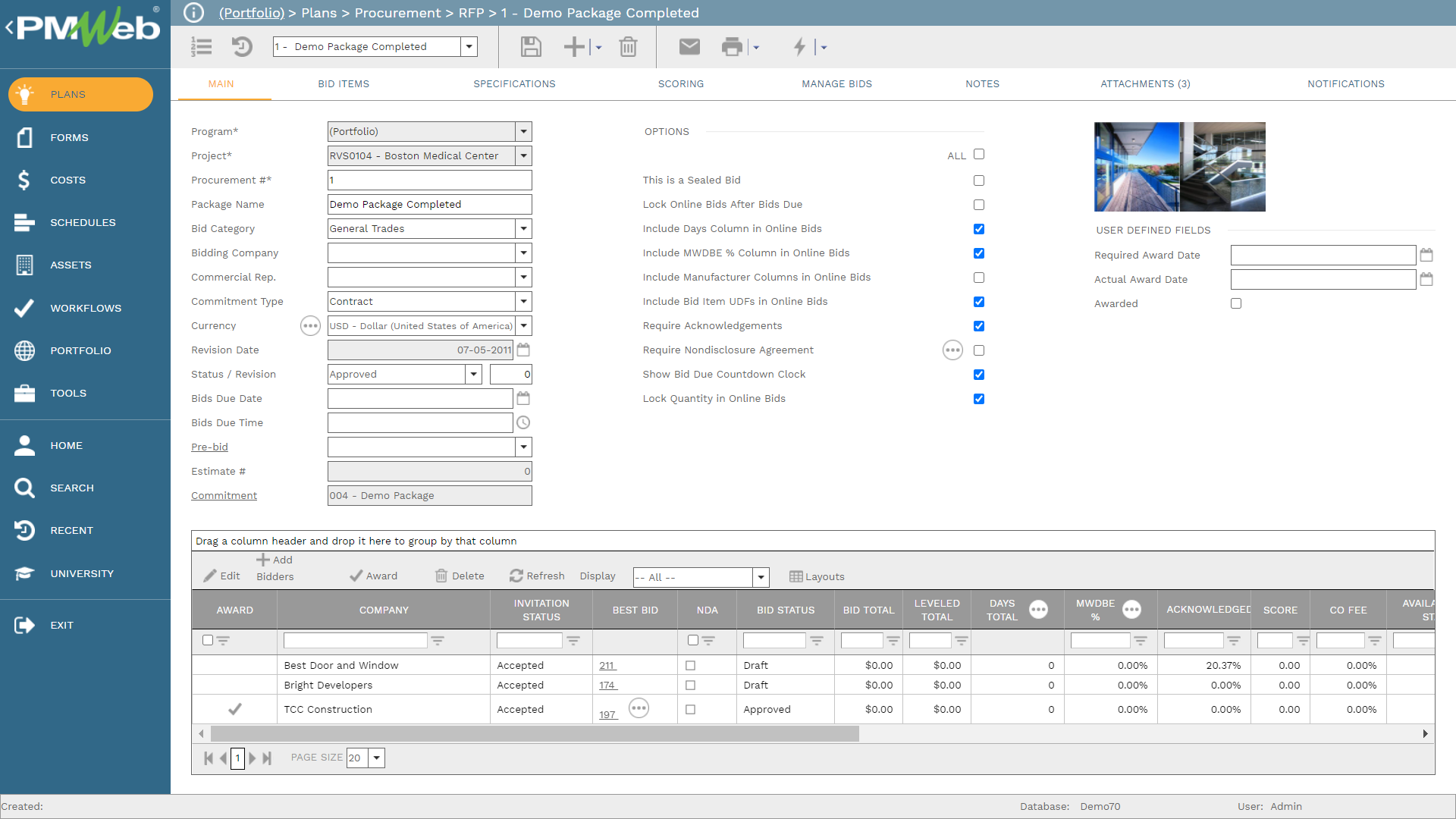 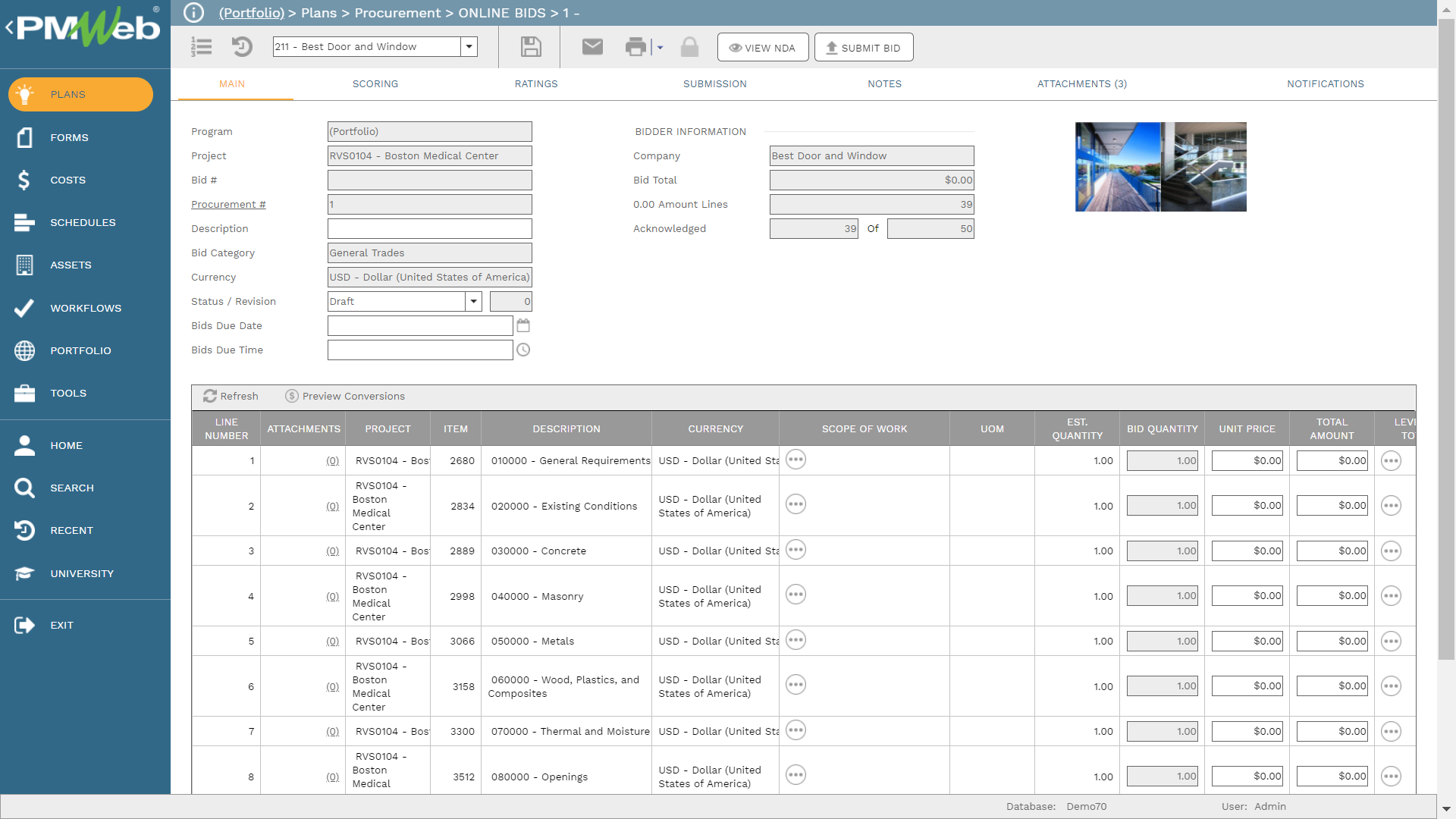 PMWeb procurement module will automatically capture the submitted bid proposals submitted by the invited subcontractors and suppliers. The module all compare those bid proposals with approved cost estimate values for the outsourced scope of work. This will immediately enable the contractor to detect and discrepancies or mistakes made by the subcontractors or suppliers. The originally approved cost estimate needs to be updated with the finally approved cost estimate for the outsourced scope of work based on the received bids. A report can be generated to summarize the procurement analysis result for each bid package. 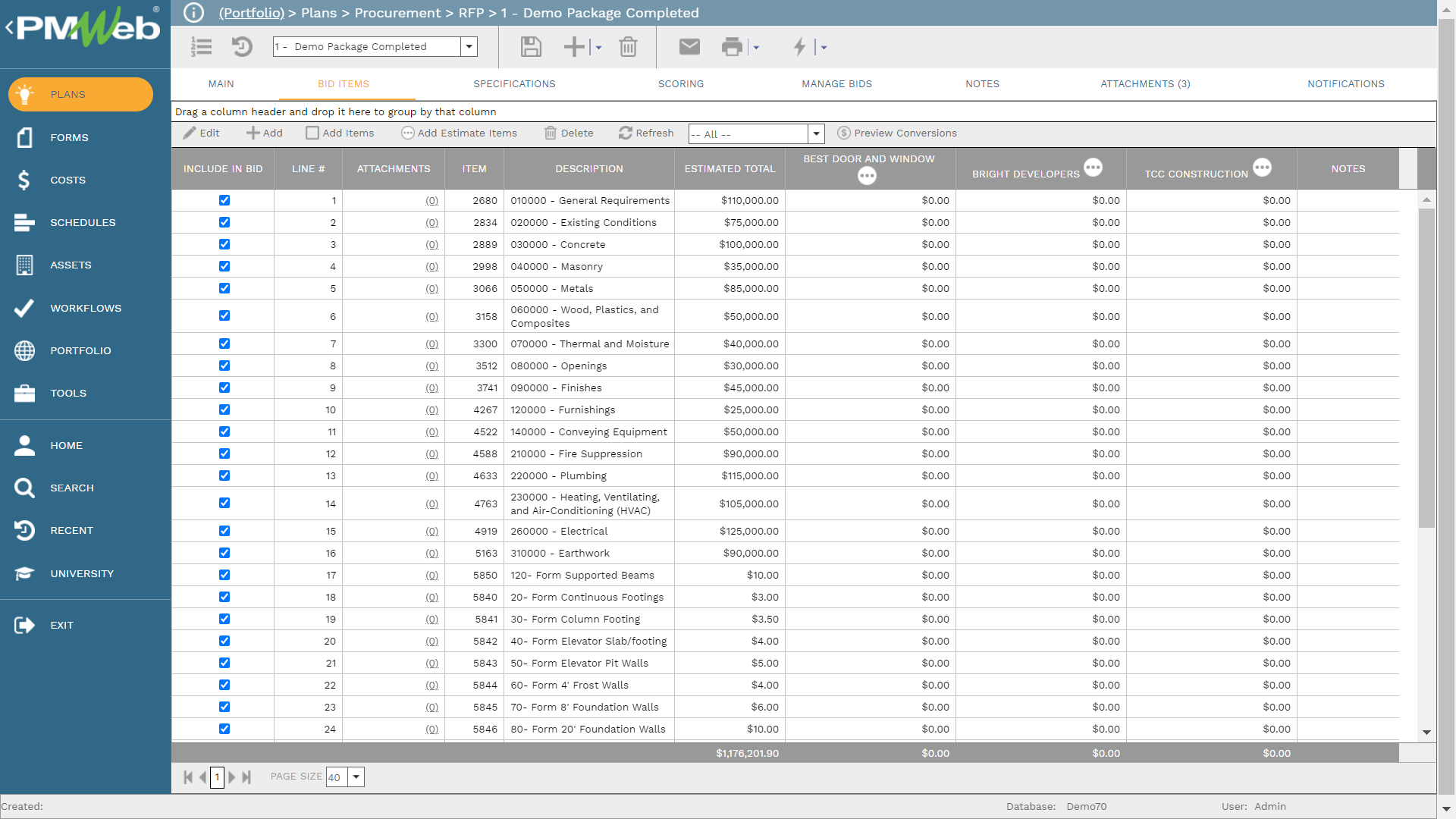 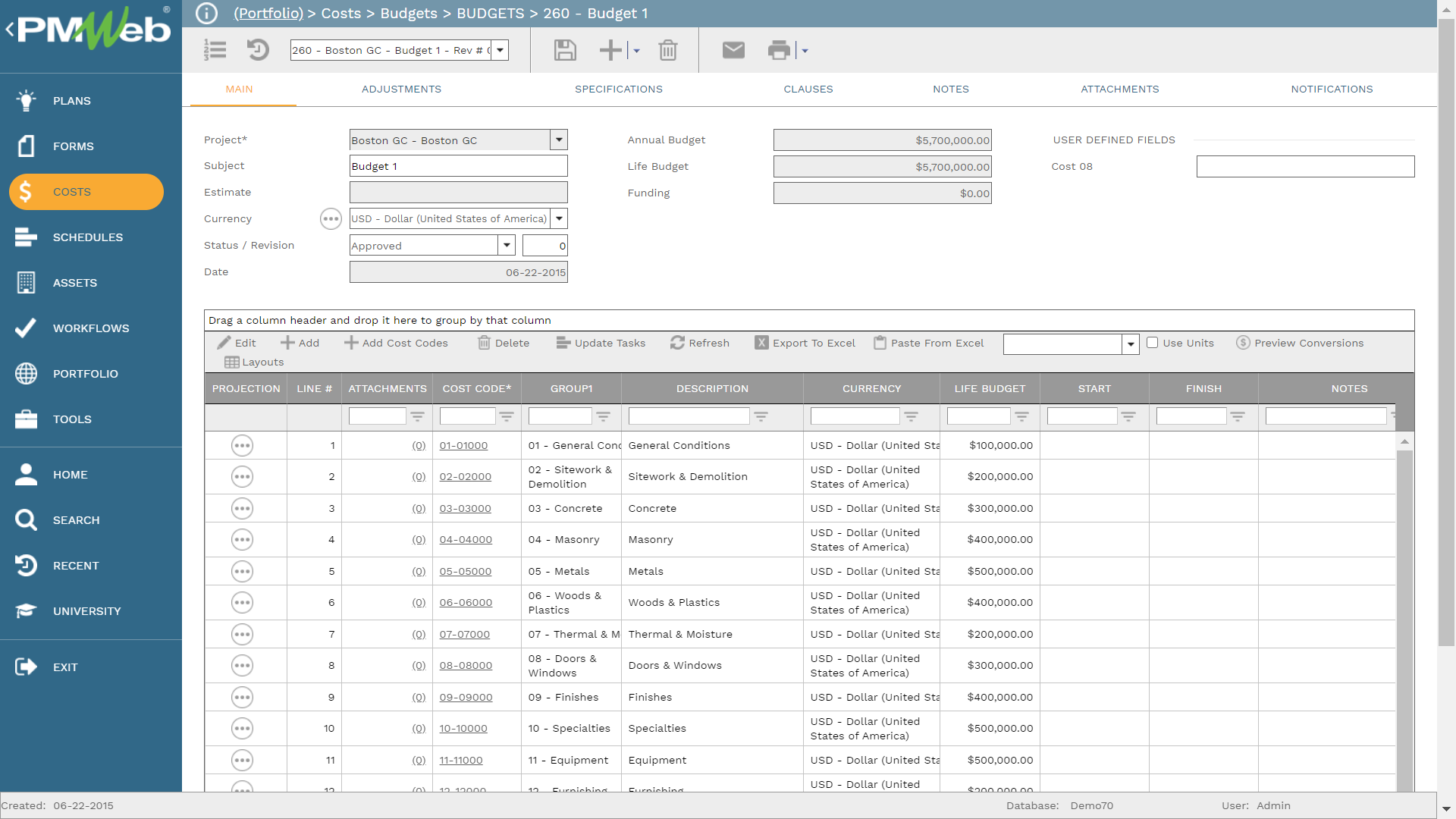 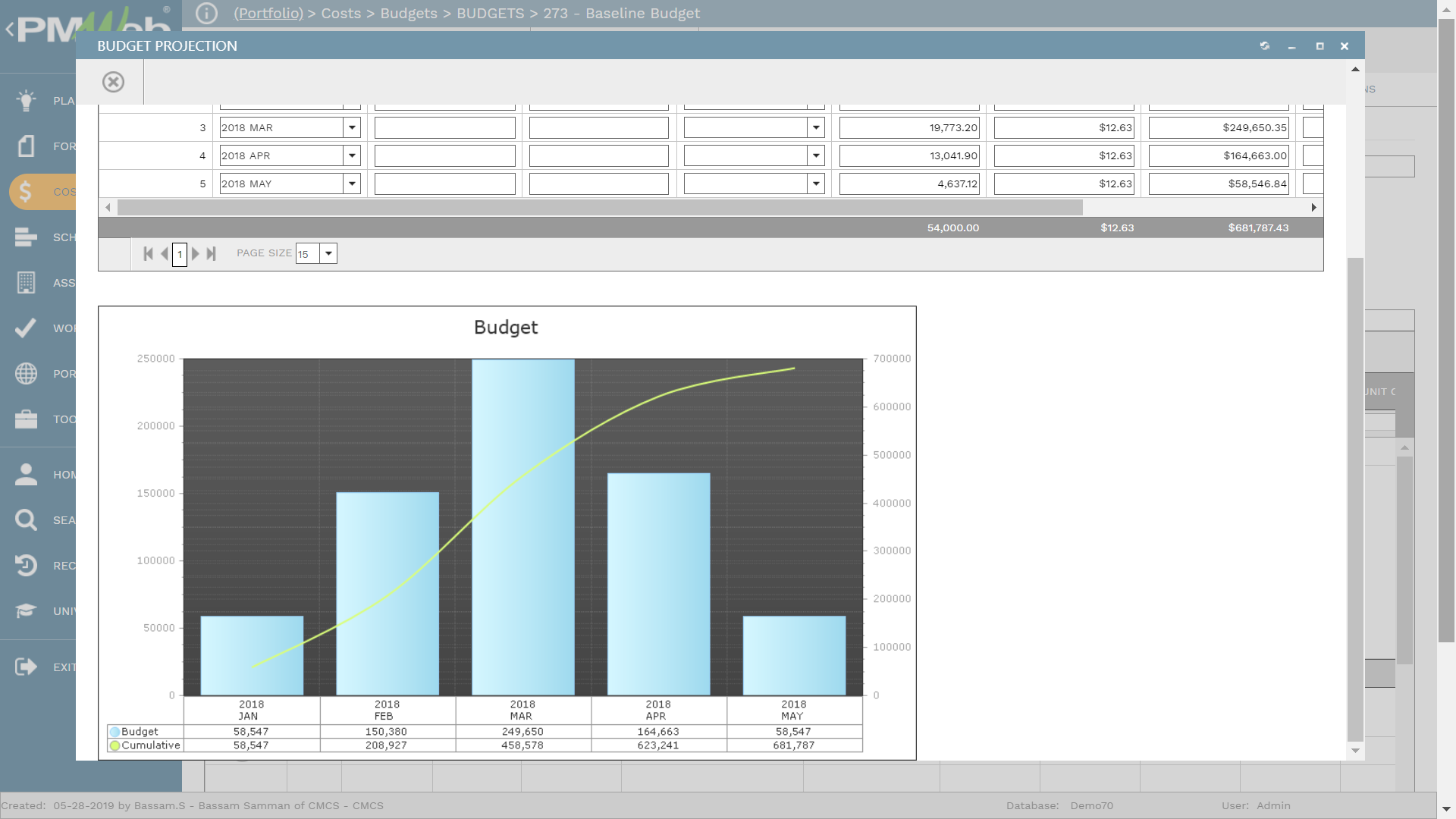 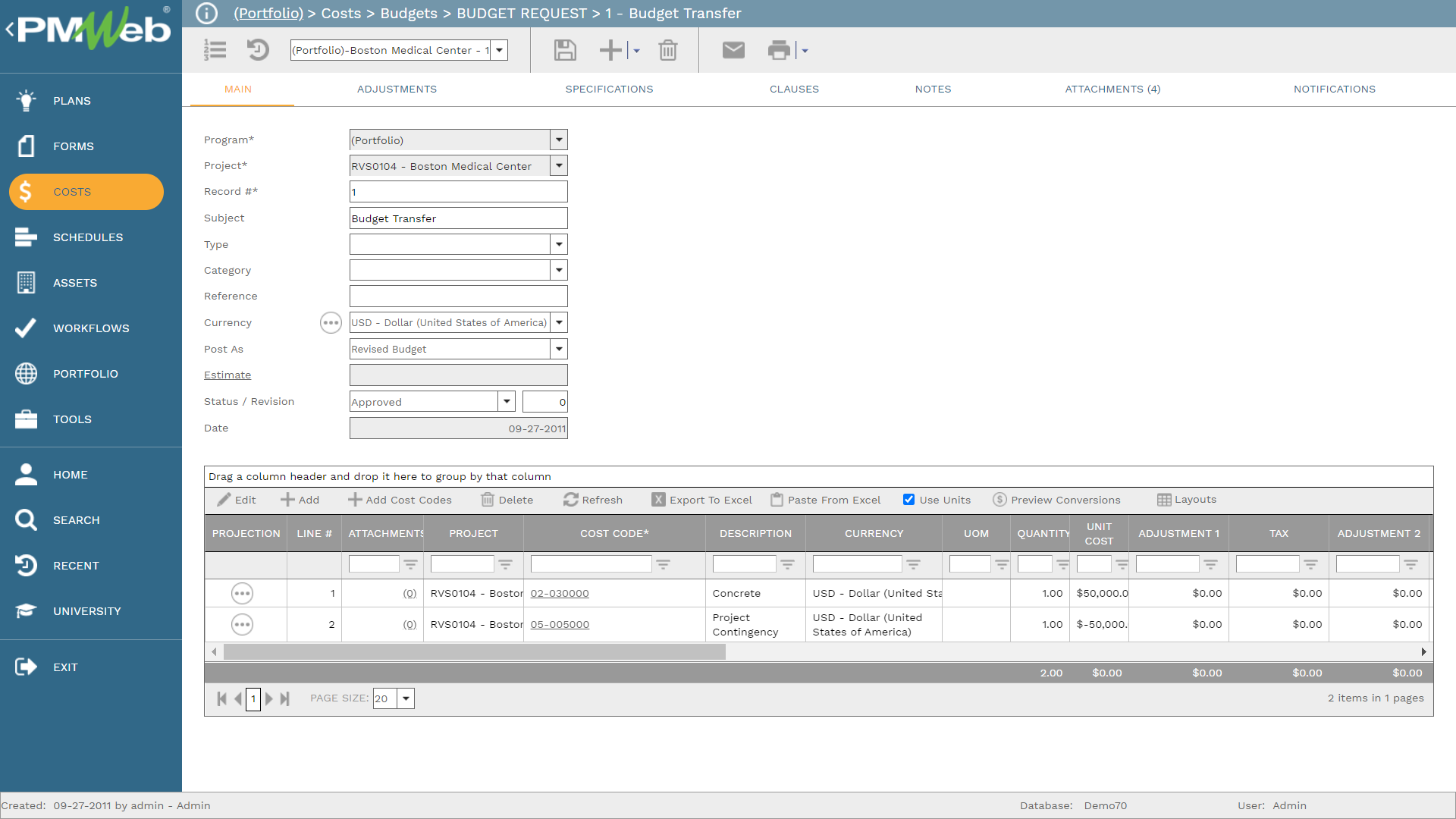 The contract agreement between the Project Owner and the Contractor represents the revenue or income that the contractor will earn from completing the project’s scope of work in accordance the project’s specifications, drawings and other contract documents. PMWeb contract module will capture the details of each Bill of Quantity (BoQ) line item along with the associated project schedule activity. There is also the option to have the contract line items aligned with the integrated project schedule whether it was cost-loaded or loaded with the weighted value for each line item. The contract terms and conditions will also be part of this contract agreement. All adjustments for advance payment, retention and VAT will be added to the contract. 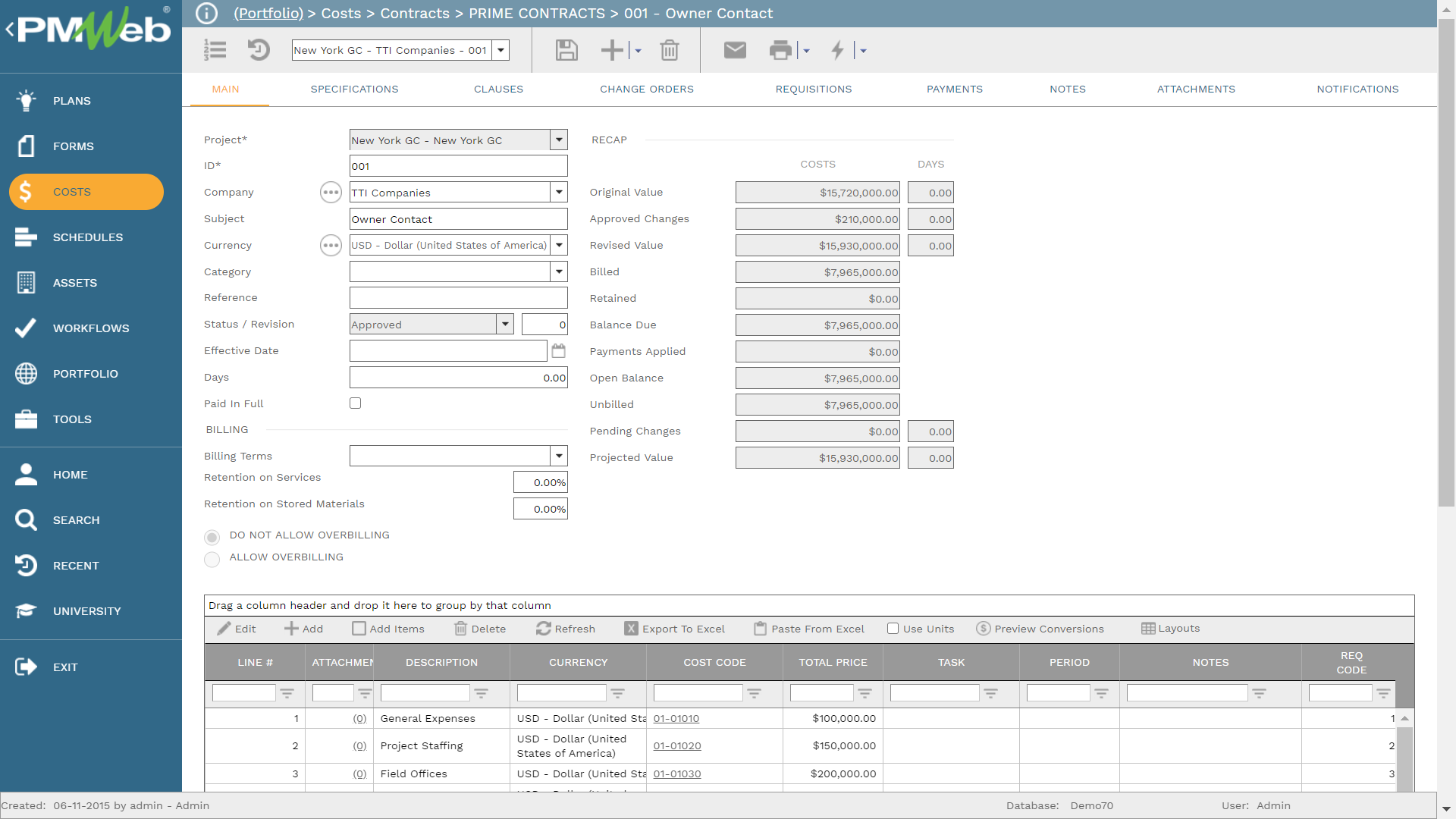 All change orders regardless if they were approved, pending or disputed will be captured in the change order module. It is important to attach all documents as well as PMWeb records and imported emails that are needed to support change order submission in particular if a change could be a disputed change and part of the project’s claim submission.

Monthly requisitions, or actual earned income or revenue, for work in place will be captured using PMWeb requisition module. For each line item, the same percent complete used to calculate the budget earned value and commitment progress invoice for work in place will be used to calculate the income value for the work in place for the current progress period. In addition, PMWeb allows capturing the actual amount received against the approved interim payment certificate. 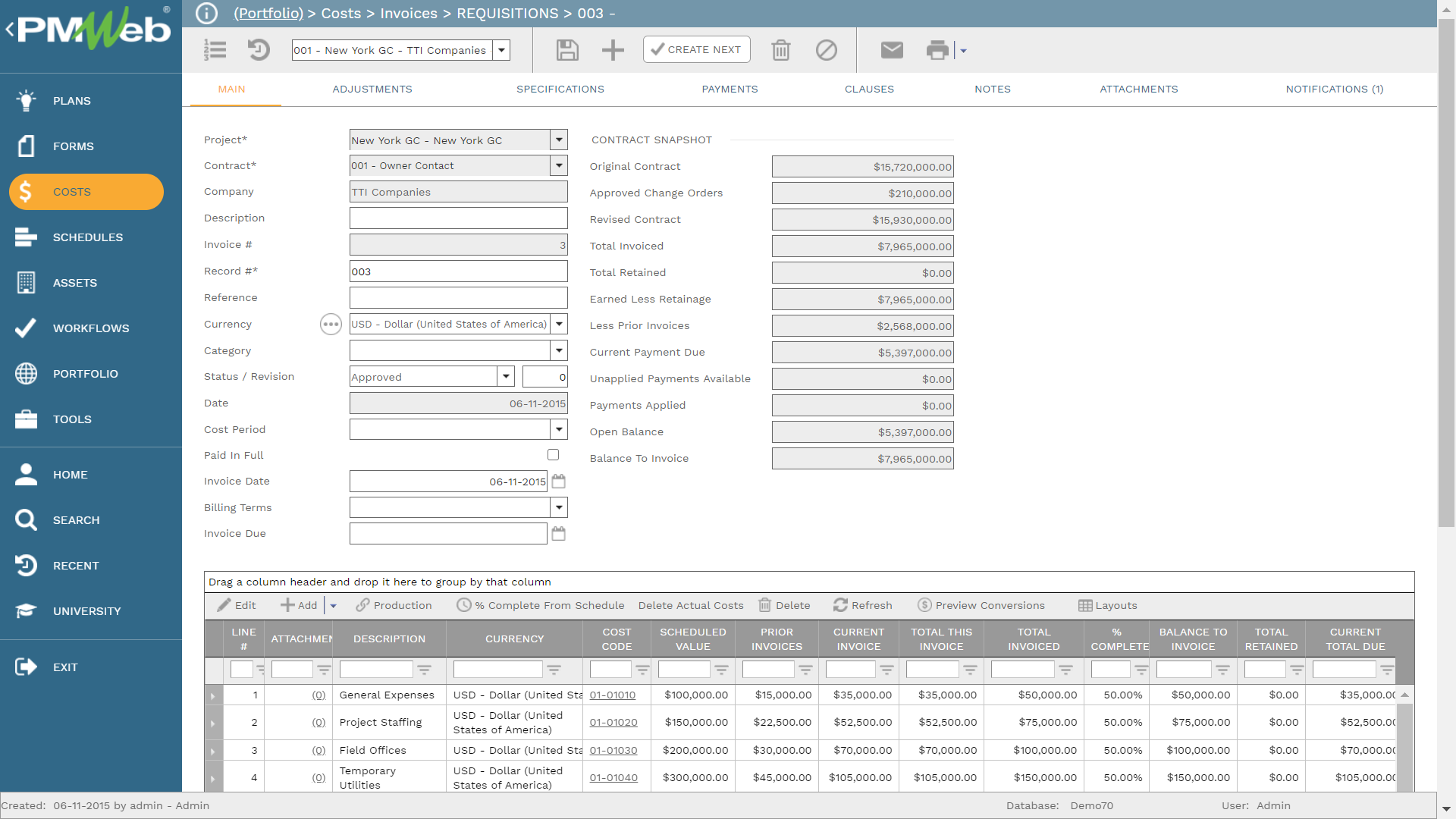 A commitment will be created for each subcontract or supplier agreement which will include the agreed prices for the outsourced scope of work as well as inter-company commitments. The commitment agreement will include the payment terms and conditions for the approved work in place. Some Contractors might also consider having commitment contracts for their own internal business units like plant, ready-mix, material purchase and others who will be involved in the project delivery. 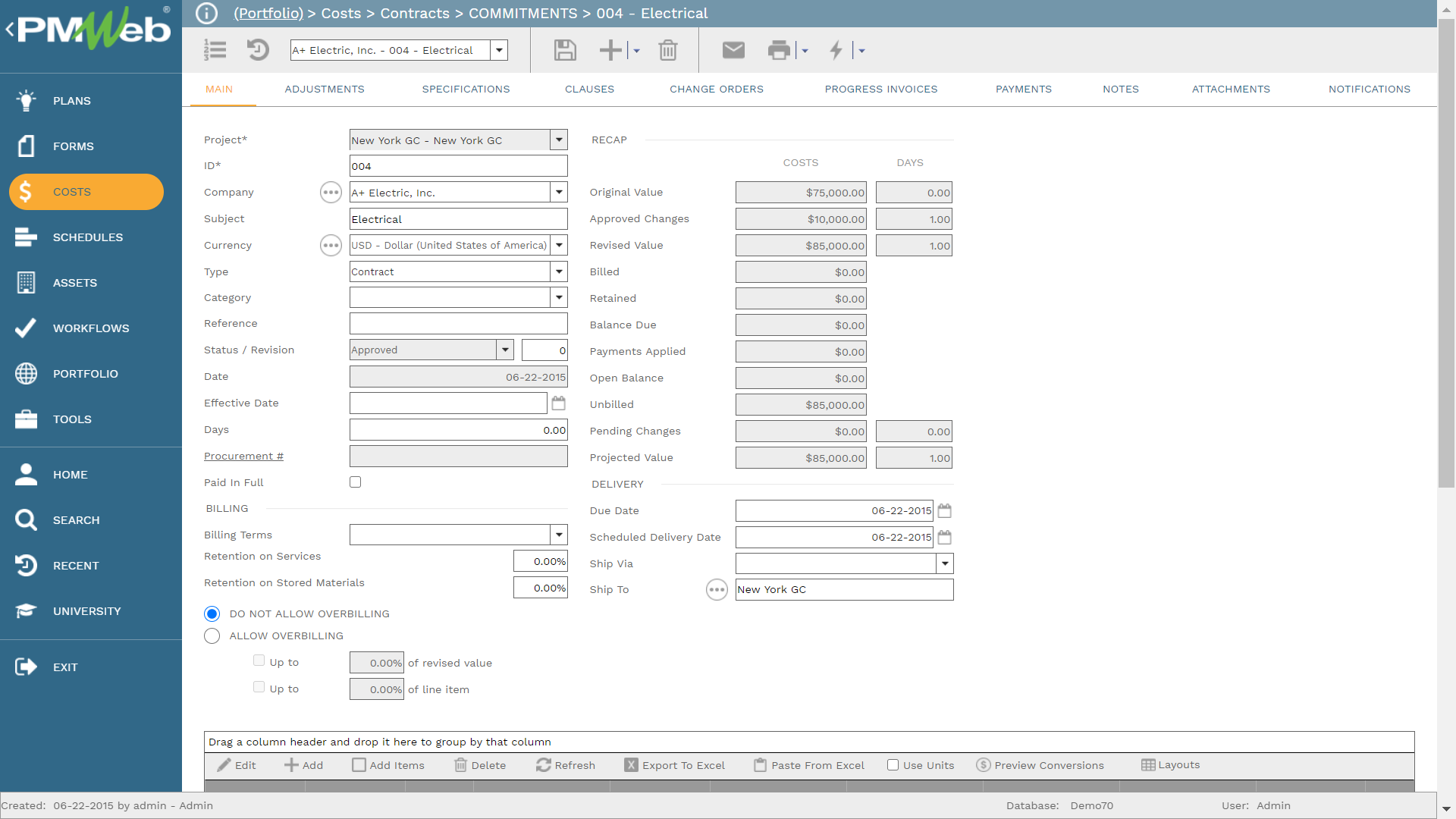 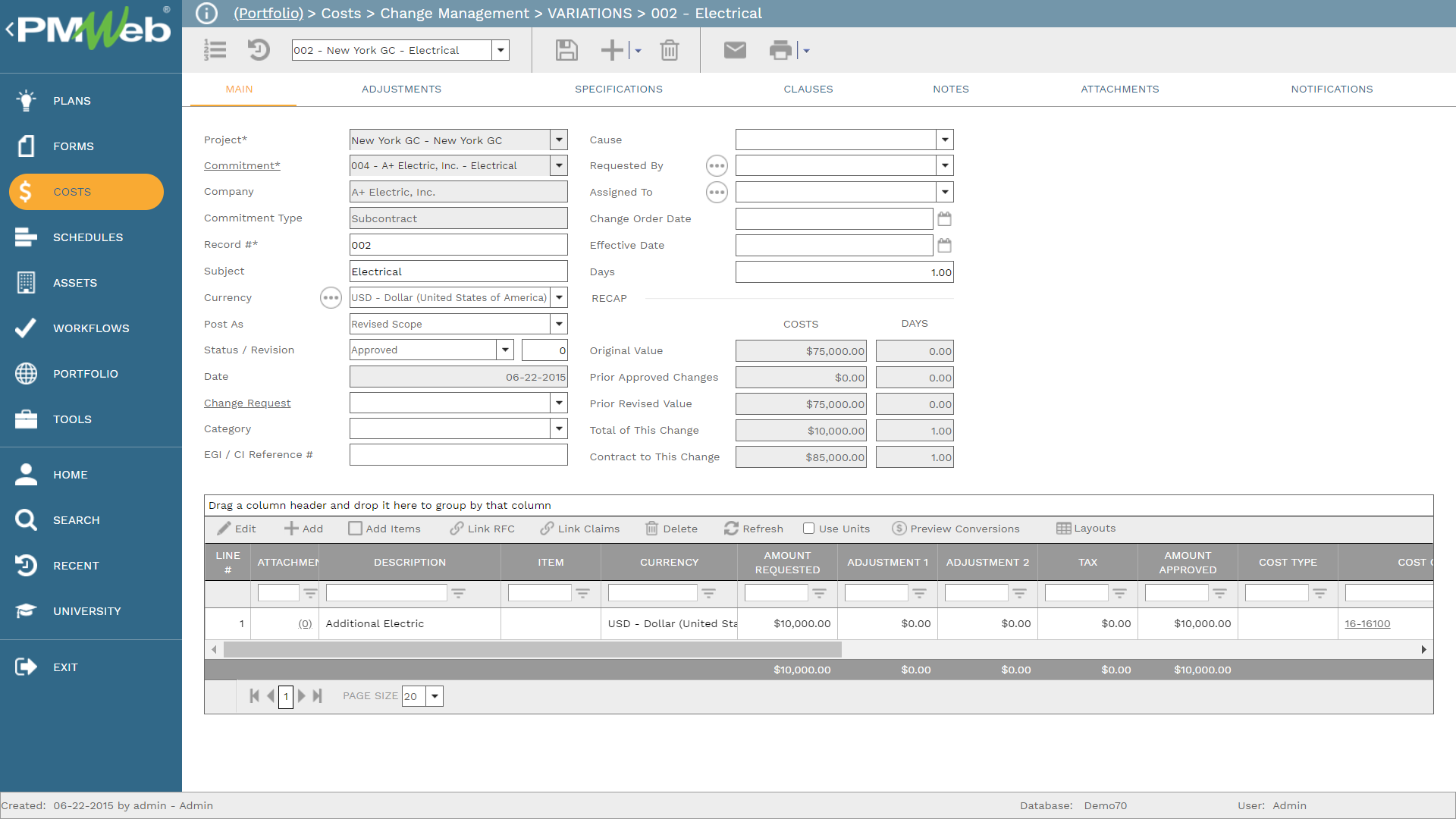 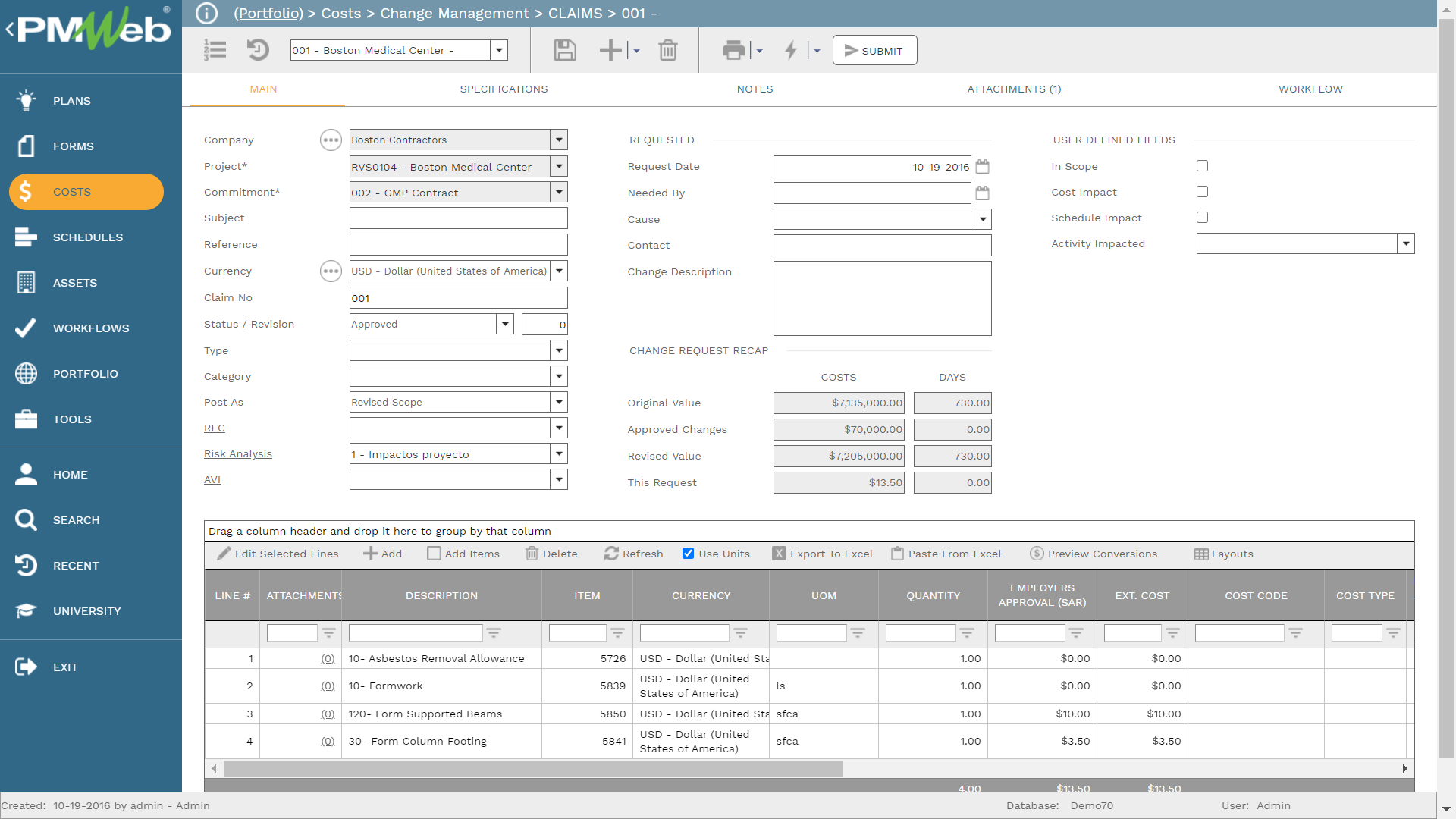 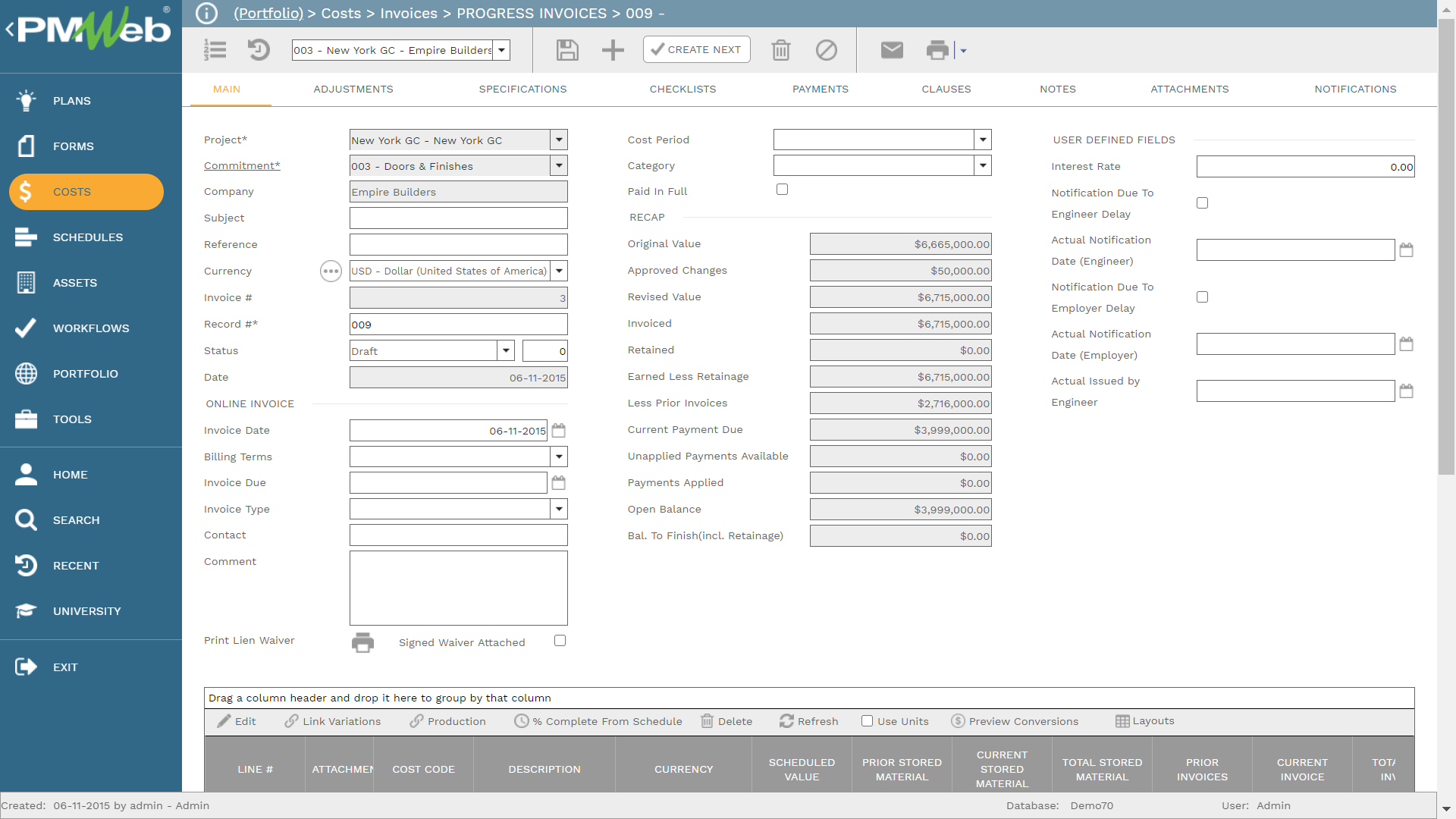 For other actual cost incurred that are not part of a commitment contract, those will be captured using PMWeb miscellaneous invoices module. The details of all such expenses will be captured in the invoice form along with all supportive documents. Again, the workflow will be used to formalize the submission, review and approval of those invoices. In addition, PMWeb timesheets can be used to capture the cost of management team deployed on the project if they were not covered in an inter-company commitment contract. 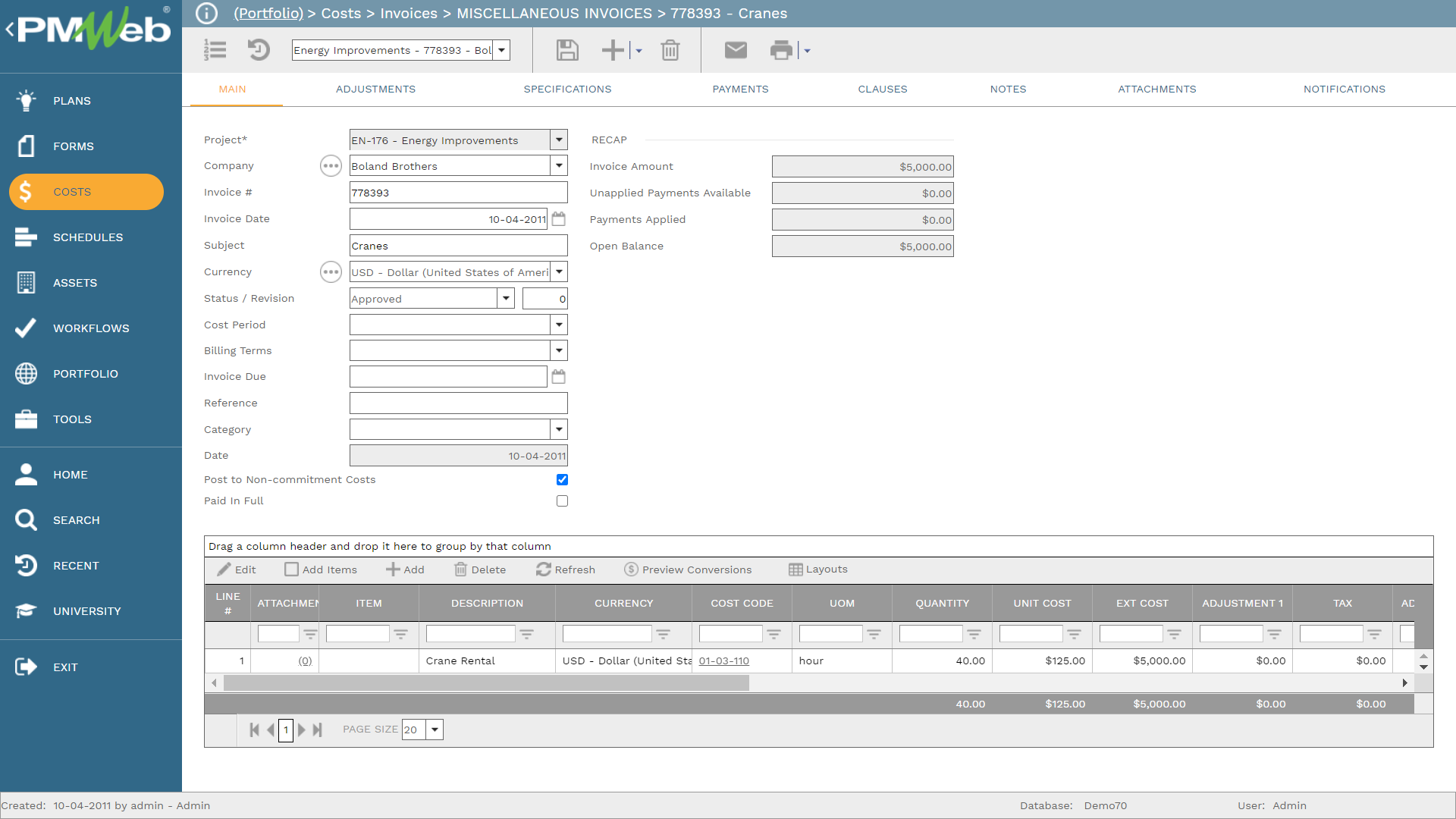 The cost data captured in all PMWeb cost management processes will be automatically stored in PMWeb cost ledger. This will enable creating as many as needed cost worksheets that similar to MS Excel spreadsheets to summarize and report the project’s financial status. New alias fields can be created using mathematical formulas to calculate their values. The cost worksheet can be exported into a MS Excel file format to run what-if scenarios. 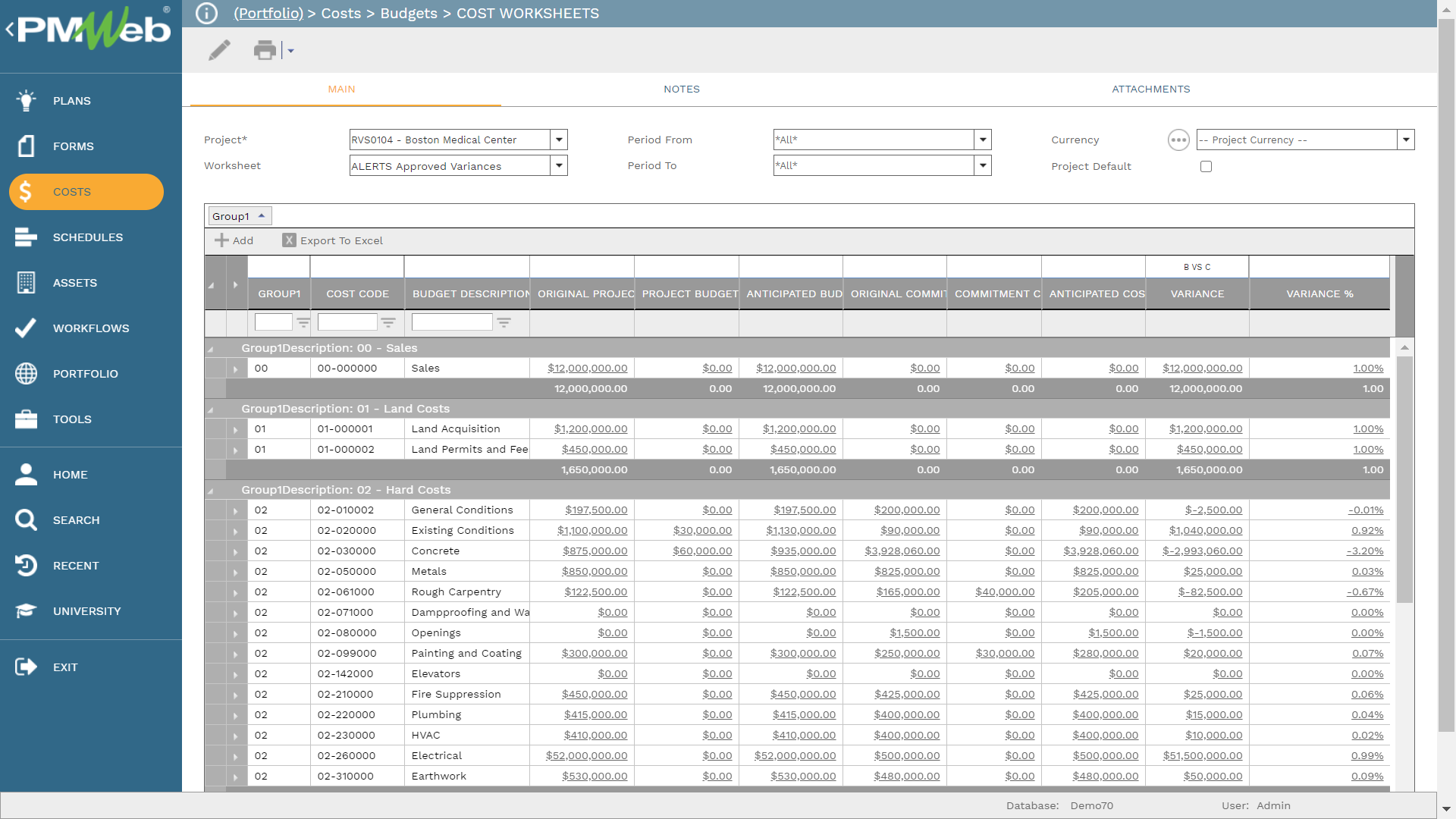 Monitoring, Evaluating and Reporting A Single Version of the Truth of the Project Financial Status

The project’s financial performance status will be assessed using three different metrics. For example, the target profit metric is based on the variance between the original awarded income contract value and approved budget to deliver the project, the current profit/loss status as of today metric is the variance between the income contract amount invoiced to data and the actual cost incurred to date, and the third metric will be the projected profit/loss at project’s completion which is the difference between projected income contract at completion (revised contract plus all pending and disputed change orders) and the forecast cost at completion. 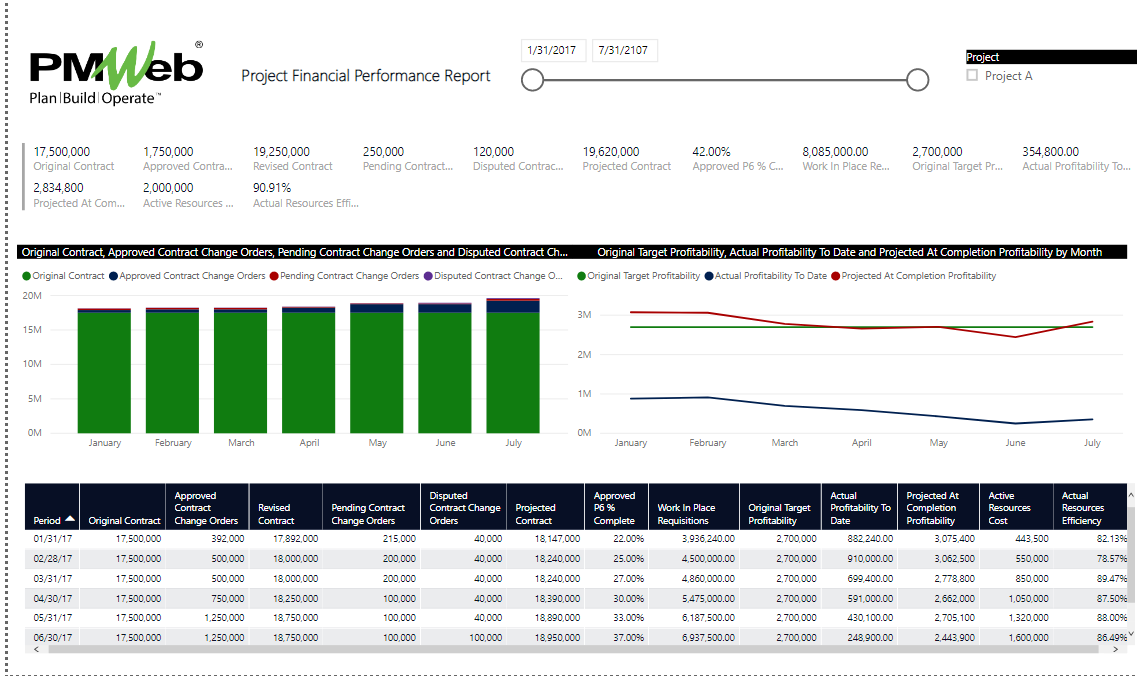