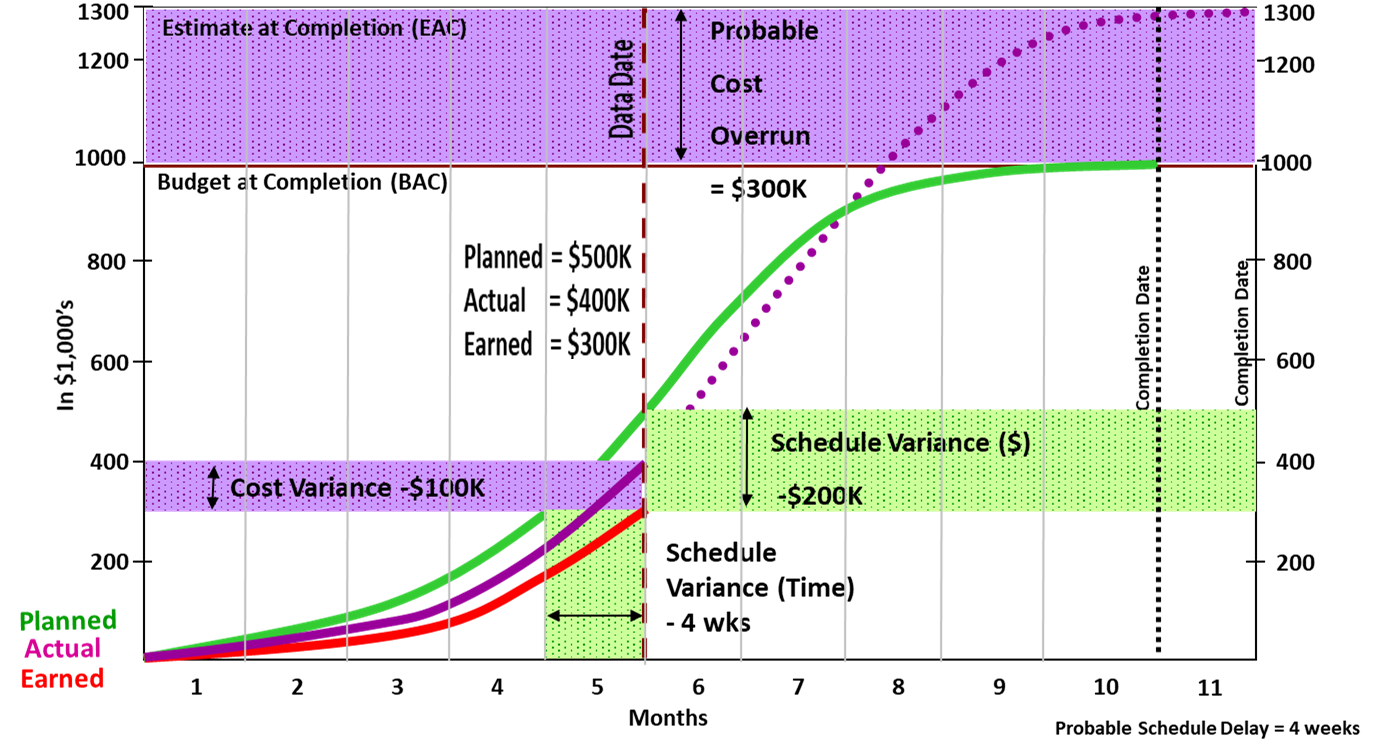 The use of what is known as the cost loaded schedule to establish the value of interim payment certificates is a growing trend among contractors as well as project owners who are involved in delivering capital construction projects. The approved cost-loaded schedule will become the basis for quantifying the work in place based on the approved percent complete value for each activity. The total value of the cost loaded schedule should be identical to the awarded contract value also known as the Budget at Completion (BAC). The cashflow value generated from the cost-loaded schedule will provide the Planned Value (PV) for the monthly work in place that the contractor is scheduled to perform for each project schedule activity. At the end of each progress period, the project schedule will be updated with actual approved progress percent value for which it will become the basis for calculating the Earned Value (EV) for each completed or progressed activity.

The variance between the Earned Value (EV) and Planned Value (PV) will be the Schedule Variance (SV) where a negative SV value will indicate that the project did not earn the planned schedule performance and could be an indication of schedule delays although this needs to be determined from the Total Float (TF) value. On the other hand, a positive SV value indicates that the contractor’s approved work in place exceeds to what was originally planned. The project schedule efficiency is measured using the Schedule Performance Index (SPI) which is calculated by dividing Earned Value (EV) by Planned Value. A SPI value that is more than one indicates a favorable schedule performance while a value that is below one indicates an unfavorable schedule performance.

Nevertheless, to have a meaningful earned value management (EVM) reporting, the Actual Cost (AC) incurred by the contractor in delivering the completed work in place needs also to be captured. The actual cost will be the cost incurred by the contractor in consuming his own labor and equipment resources, site and home office overhead expenses and contribution, subcontracted scope of work, material supplies, consumed contingency buffer among others. For a contractor, all those anticipated actual costs need to planned and fixed preferably before the contract agreement is formally awarded. This will ensure that the project can be delivered at no loss to the contractor.

Using a Project Management Information System (PMIS) like PMWeb, contractors can ensure having a real time single version of the truth earned value management (EVM) reporting system that is based on the approved cost loaded schedule and interim progress updates as well as the actual costs associated in delivering the project’s scope of work. PMWeb default out-of-the-box cost management modules will be used to achieve this reporting.

To start with, PMWeb cost account module needs to be aligned with the cost breakdown structure (CBS) used in the cost loaded schedule. The cost account will include all levels used in the project schedule. In addition, the financial periods that will be used to capture the actual cost incurred against each progress period need also to be defined in PMWeb periods module. 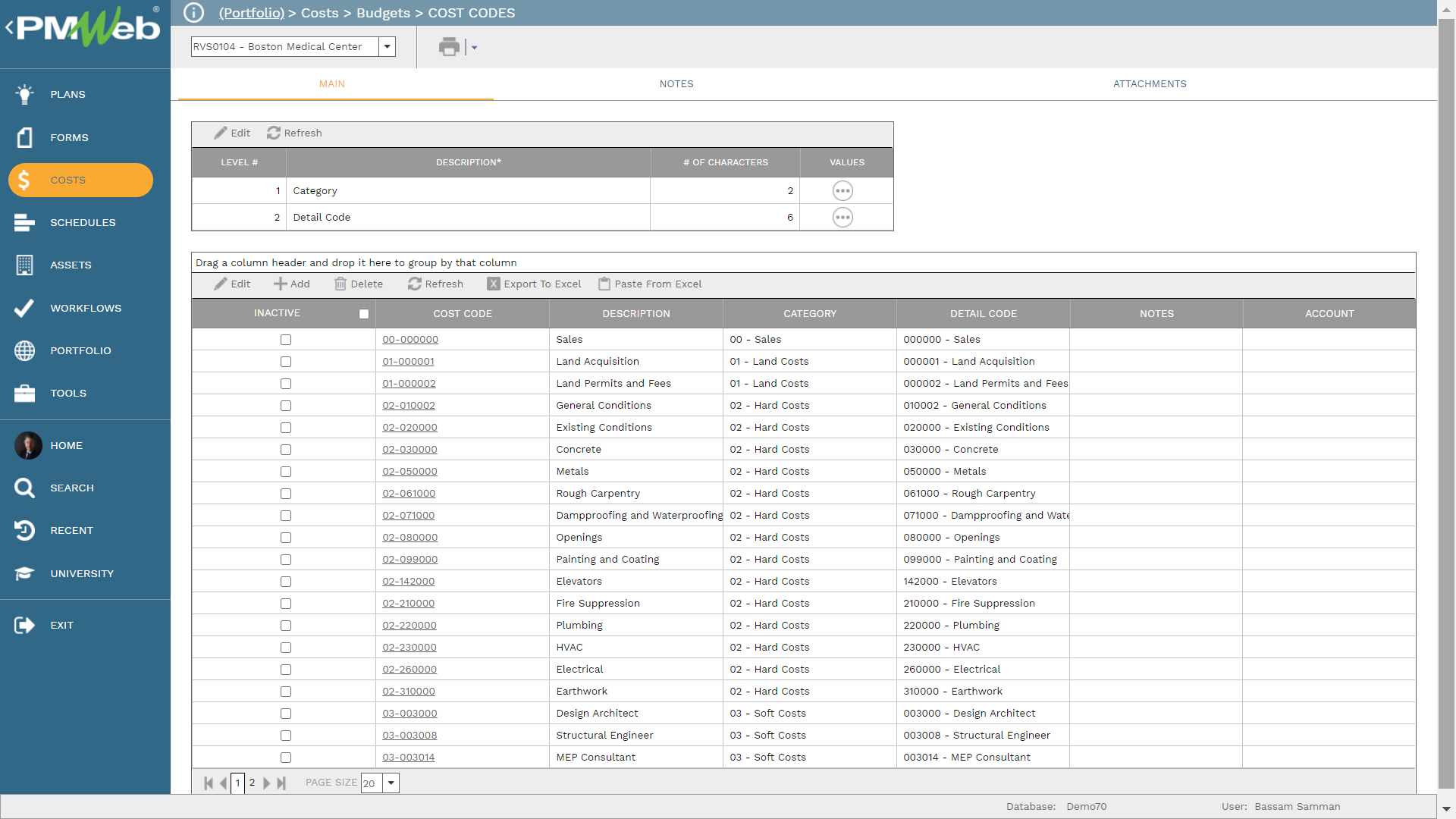 The next step is to copy and paste the cost loaded schedule into PMWeb Contract module. This module will be used to capture the interim payment certificates (IPC) issued by the Contractor to Project Owner. Each line in the contract will include as a minimum the item number, description which will be the activity description, cost breakdown structure (CBS) value, schedule activity number or ID and the schedule value of the activity. The attachment and notes fields are two additional optional fields that can be added plus the fact that PMWeb allows adding ten user defined fields to capture any other additional data needed. Those user defined fields can be decimal numeric, integer numeric, text, currency, date, Boolean, memo and values that can be selected from predefined list of values. 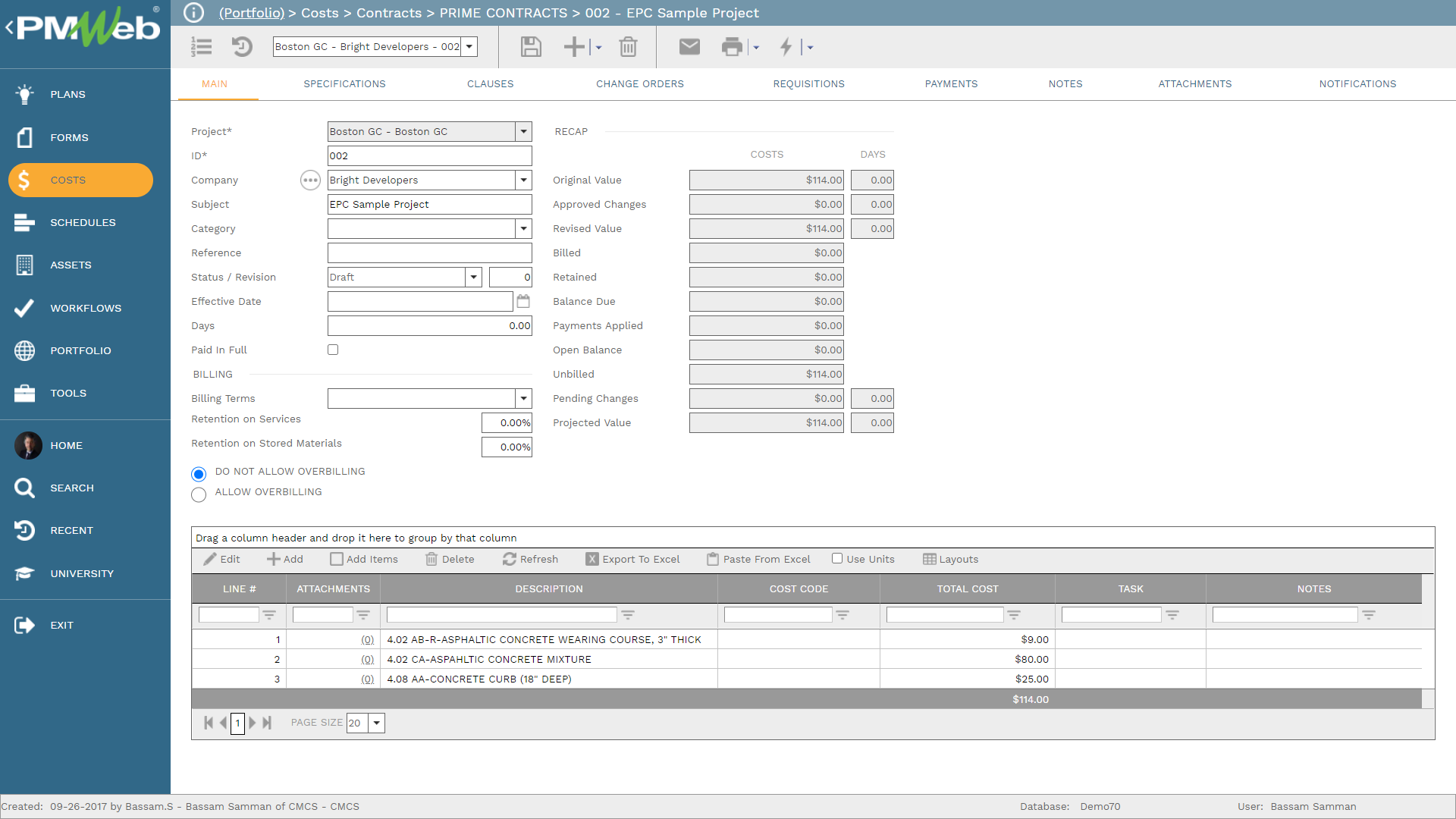 On monthly basis, PMWeb Scheduling Module will be used to import the project schedule into PMWeb. PMWeb scheduling module comes ready with the option to import all Primavera P6 schedules including but limited to the baseline, revised and periodical updates schedules. For each imported schedule, PMWeb allows capturing the details of activity planned and actual start and finish dates, original, actual and remaining duration, percent complete, total float among others. In addition, it allows importing the logic relationships between the activities. 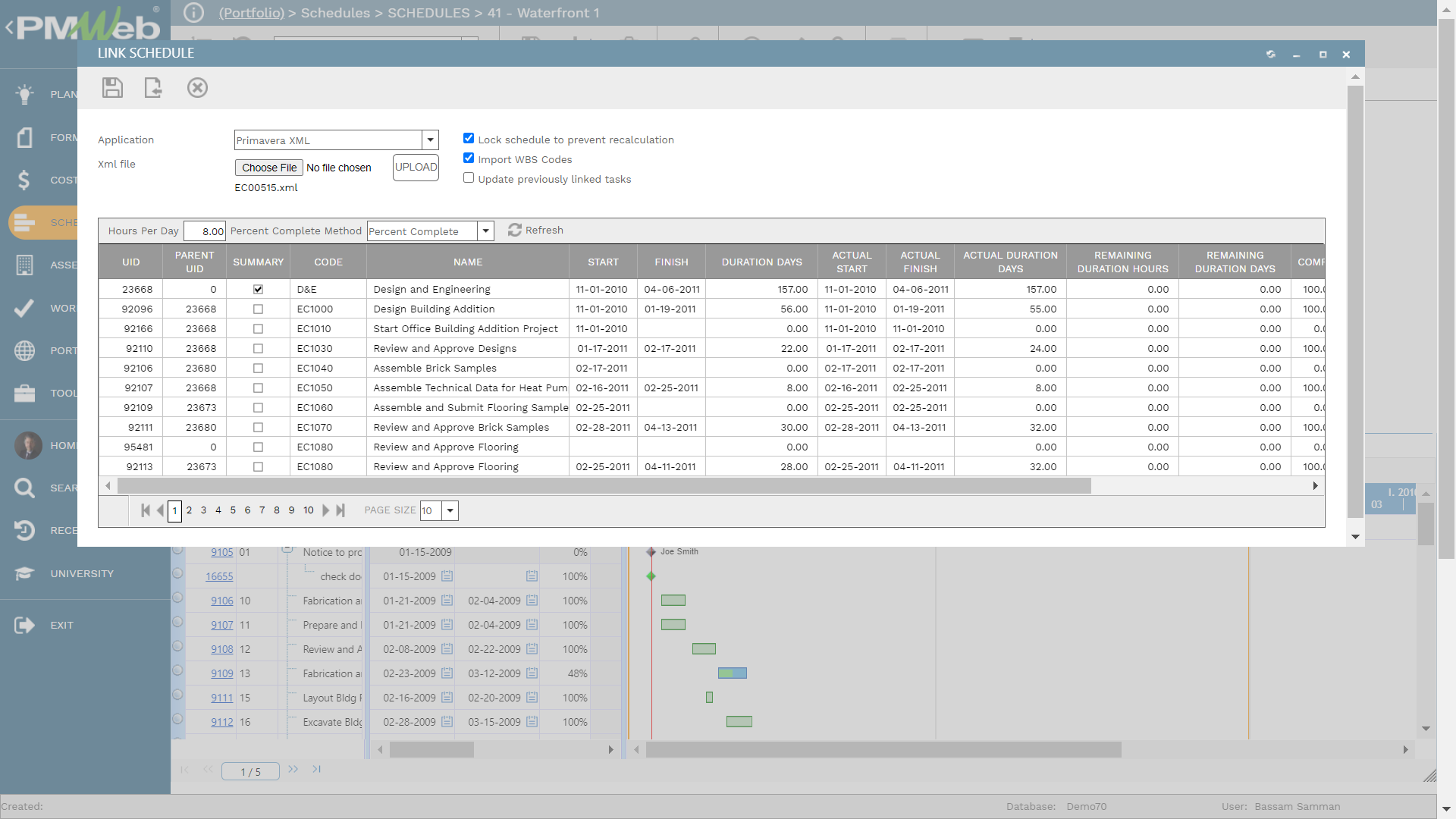 The percent complete of each activity will become the basis for calculating the value of the interim payment certificate in the project schedule tool, for example Primavera P6, as well as PMWeb. The PMWeb Requisition module will be used to capture and issue the monthly payment certificate. The importance of this module is that in addition to the fact that the calculated earned value (EV) will be identical to the updated project schedule, the contractor can also add all adjustments to the invoiced amount that are not covered in the cost-loaded schedule. For example, those adjustments could be for retention, advance payment recovery, VAT among others. All those adjustments can be added to the PMWeb requisition module to do the calculation automatically. Further, the payment tab of the requisition module allows capturing the details of the actual payment received by the contractor against the approved progress invoice including the amount paid, date and transfer details. 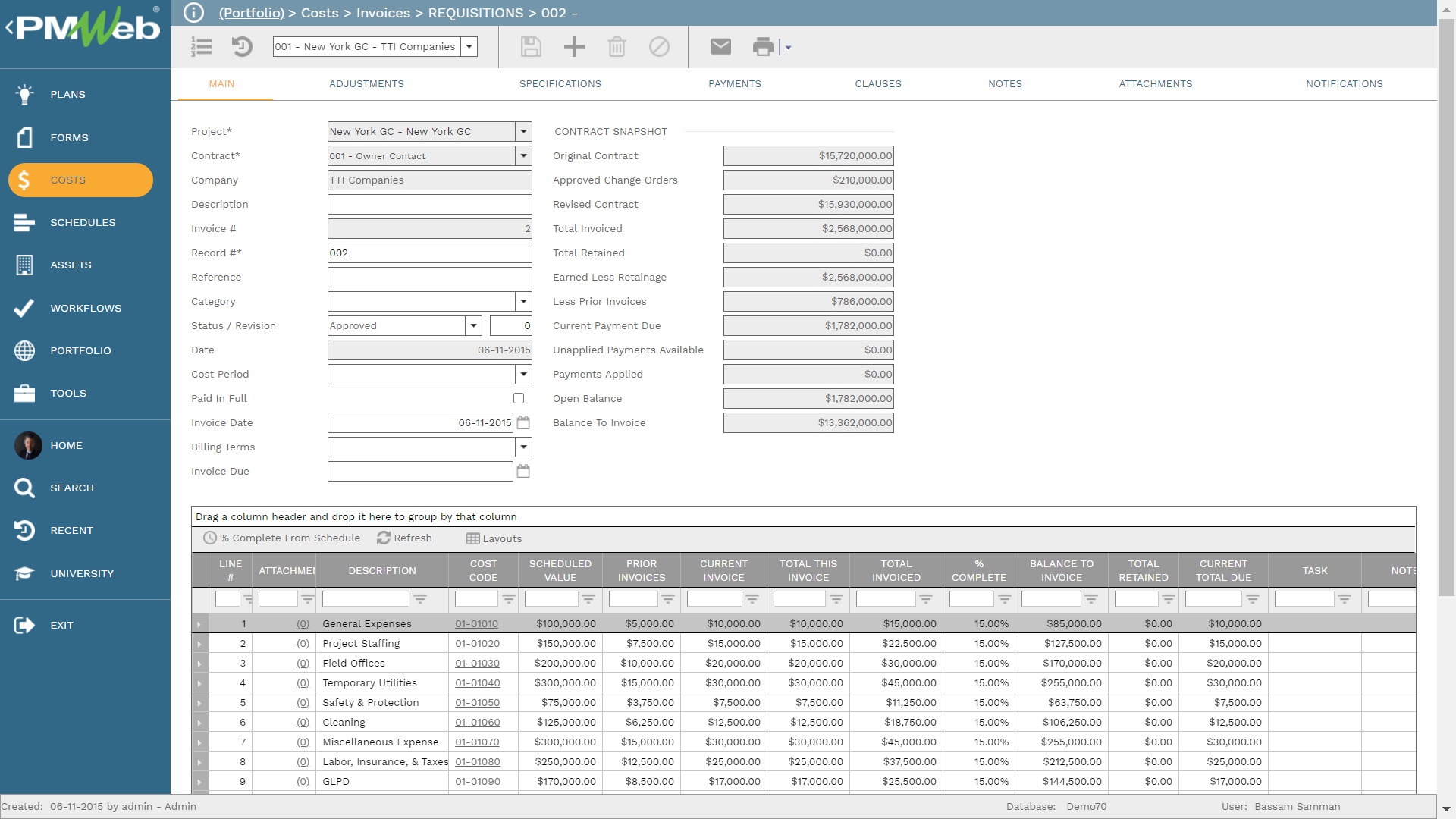 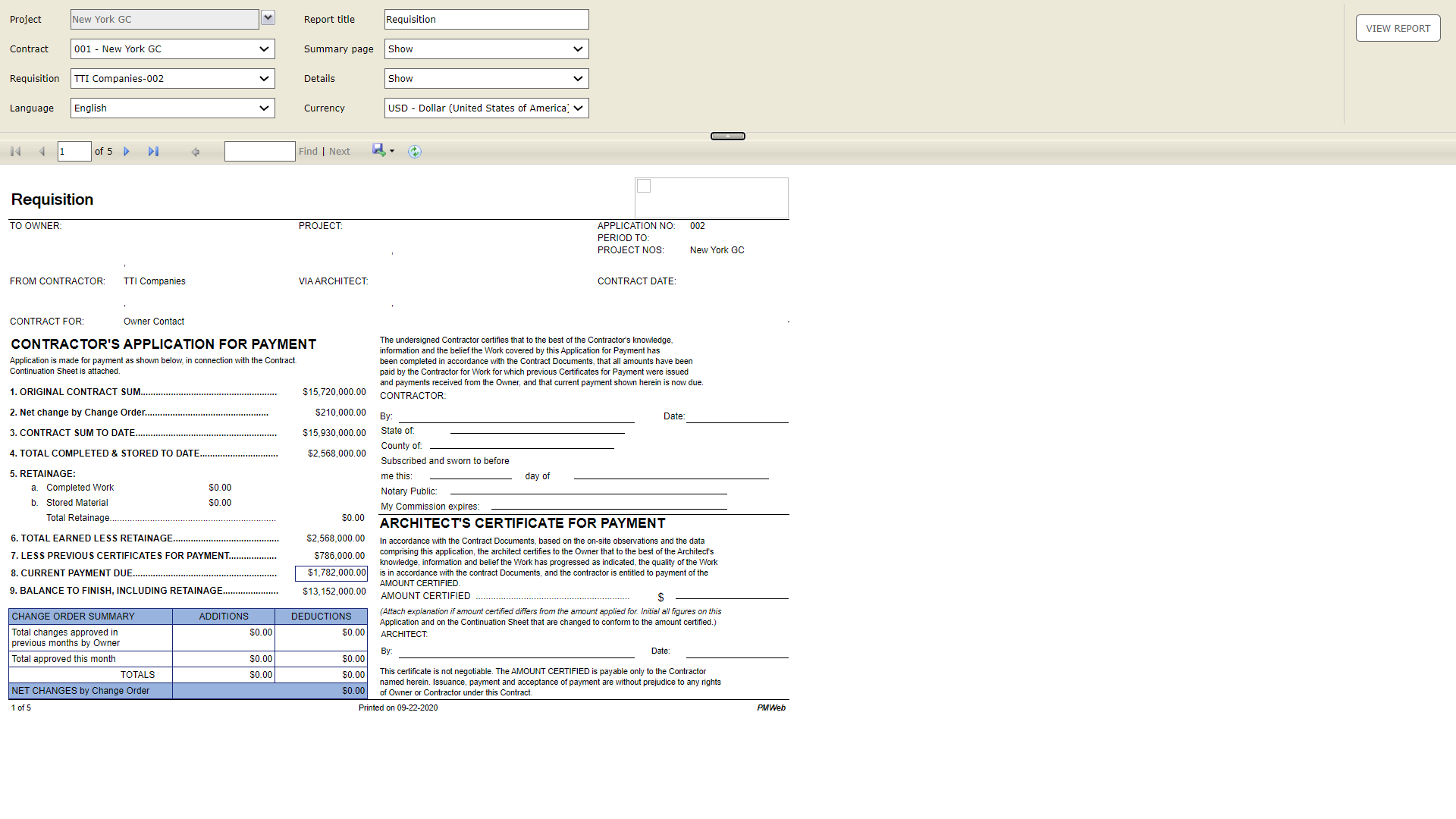 All changes that are issued against the contract agreement between the Project Owner and Contractor will be captured in PMWeb Change Order module regardless if those change orders were approved, pending or disputed. Approved change orders will be used to adjust the value of the awarded contract, which is the Budget At Completion (BAC) as well as be added to the requisition module so payments can be made against them or Earned Value (EV). 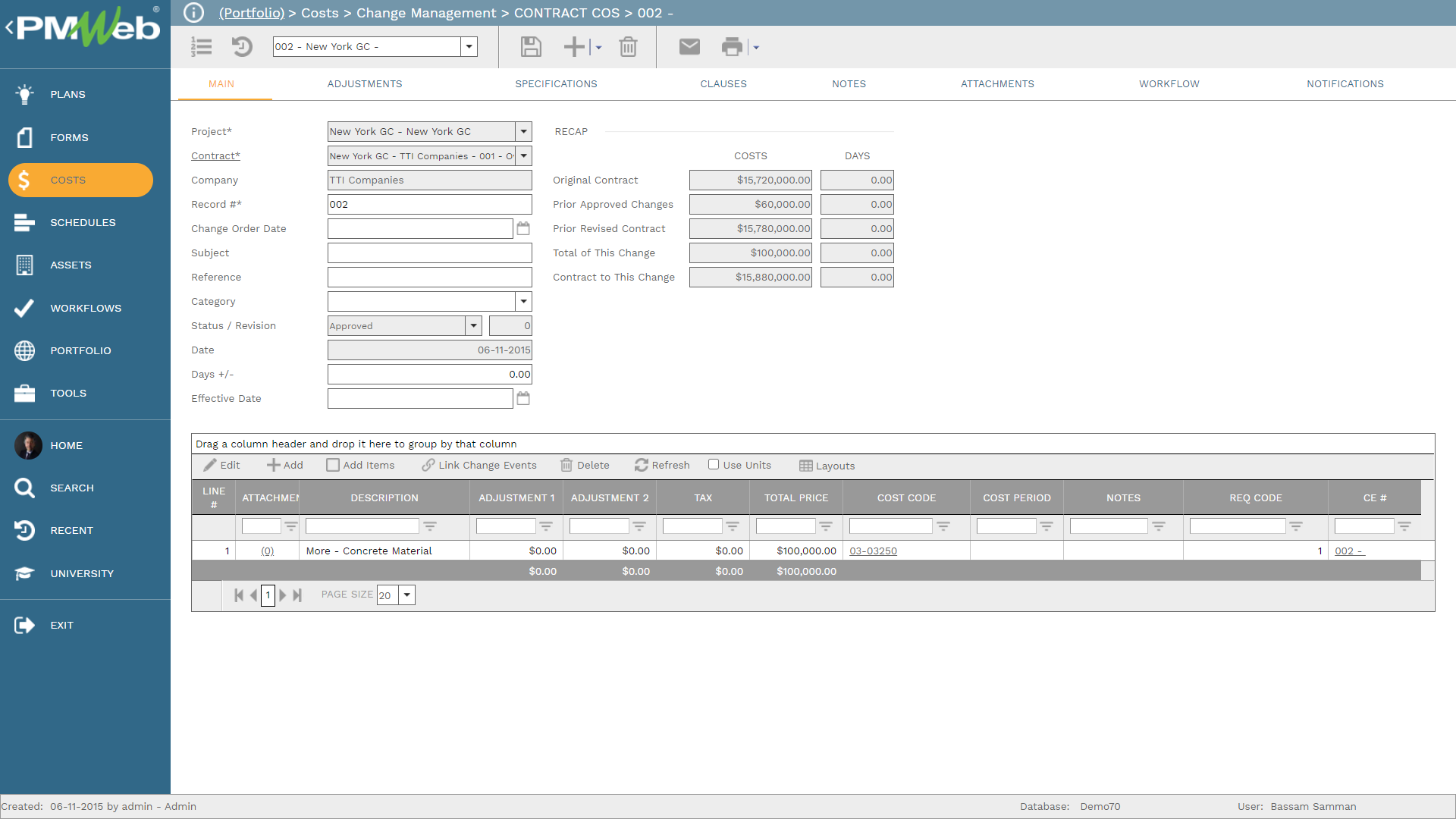 PMWeb commitment module will be the module that will be used to capture all known sources for actual expenditures against the project or simply to achieve what is known as the project buyout. There will be different commitment agreements for subcontractors and suppliers as well as inter-company commitment contracts for company’s labor and equipment resources, site and home office overhead, project contingencies, profit contribution among others. In other words, it is crucial that the Contractor ensures that all anticipated expenditures against the project are identified, aligned and committed against the awarded contract agreement. This will be kind or assurance that the project can be delivered along with the target profit margin. 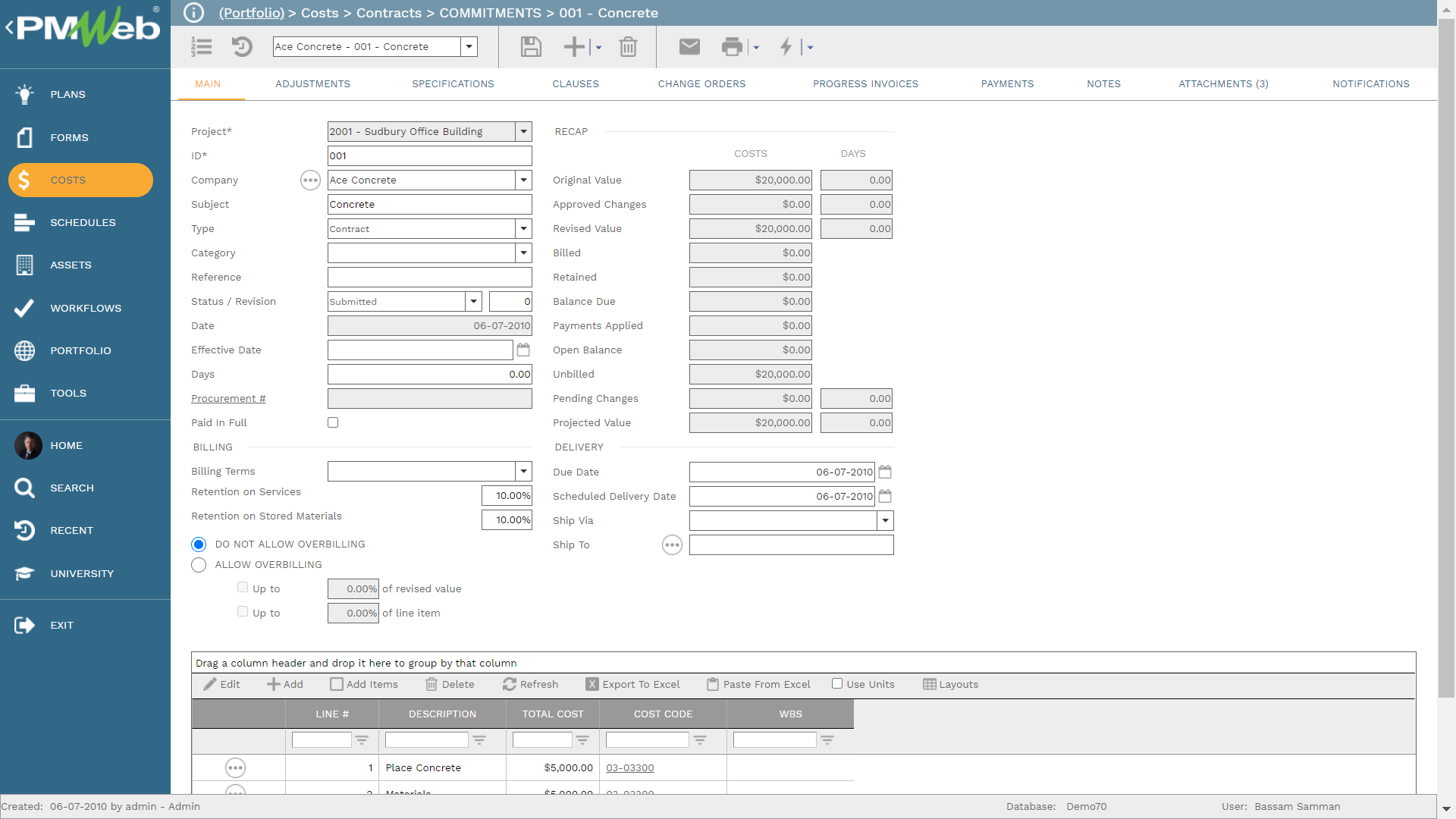 Since the payment terms for commitment contracts might differ from the payment terms between the Contractor and Project Owner, PMWeb allows defining the anticipated payment schedule for each commitment. Nevertheless, it should be noted that this anticipated cost value will not be used in the Earned Value Management (EVM) reporting but could be used by the Contractor to better manage the project’s cashflow. The anticipated cost values for commitment line item can be added manually to each period or use one of the projection curves to automatically calculate those values. 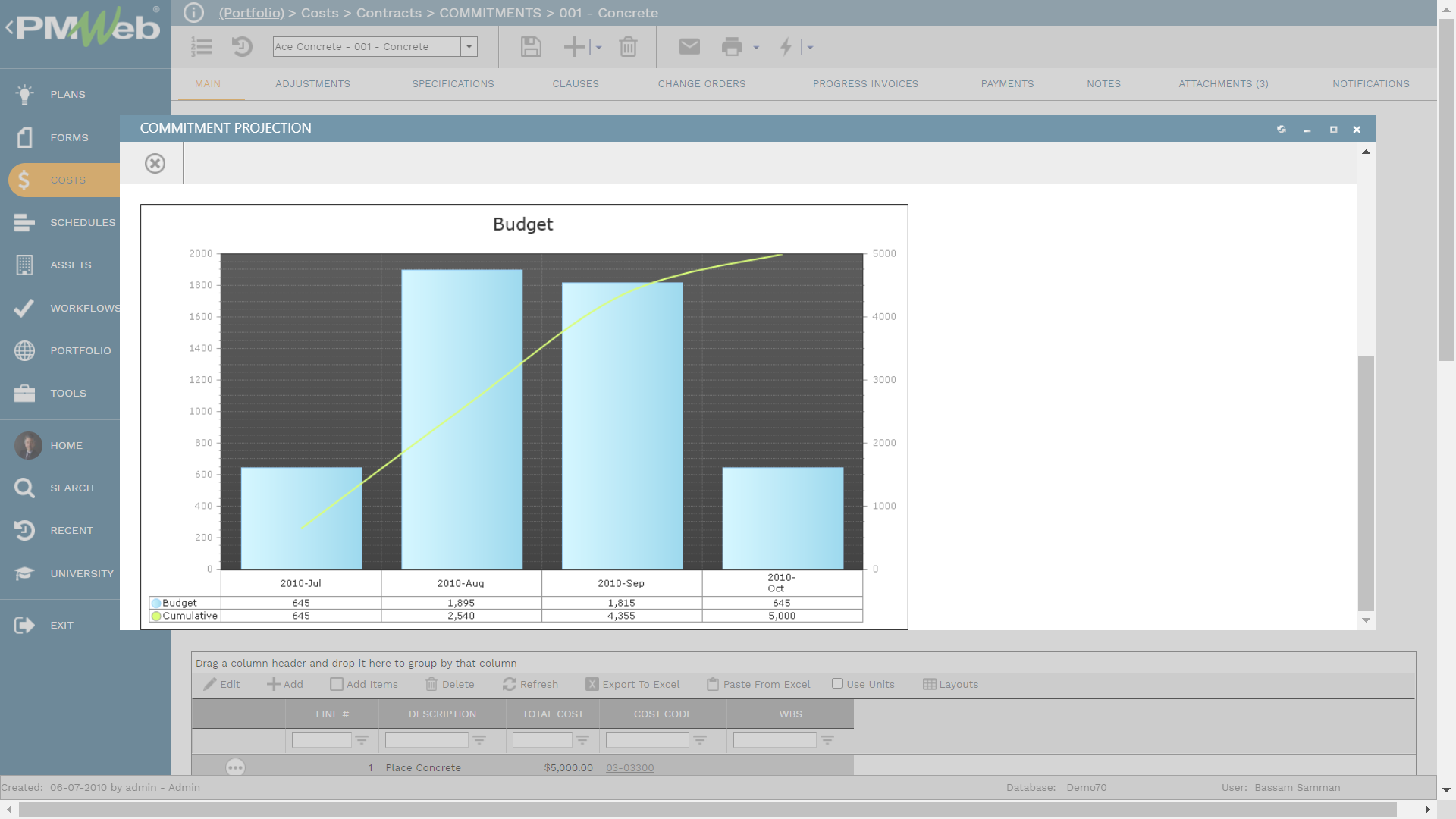 The progress invoice module will be used to capture the actual amount invoiced against each commitment contract which is also the Actual Cost (AC) incurred by the Contractor against the project. The contractor can provide limited access to the different subcontractors, suppliers and other entities to submit their interim progress invoices into PMWeb directly. This will help in expediting the process for capturing actual costs incurred by the project as well as enforce the needed transparency and accountability. 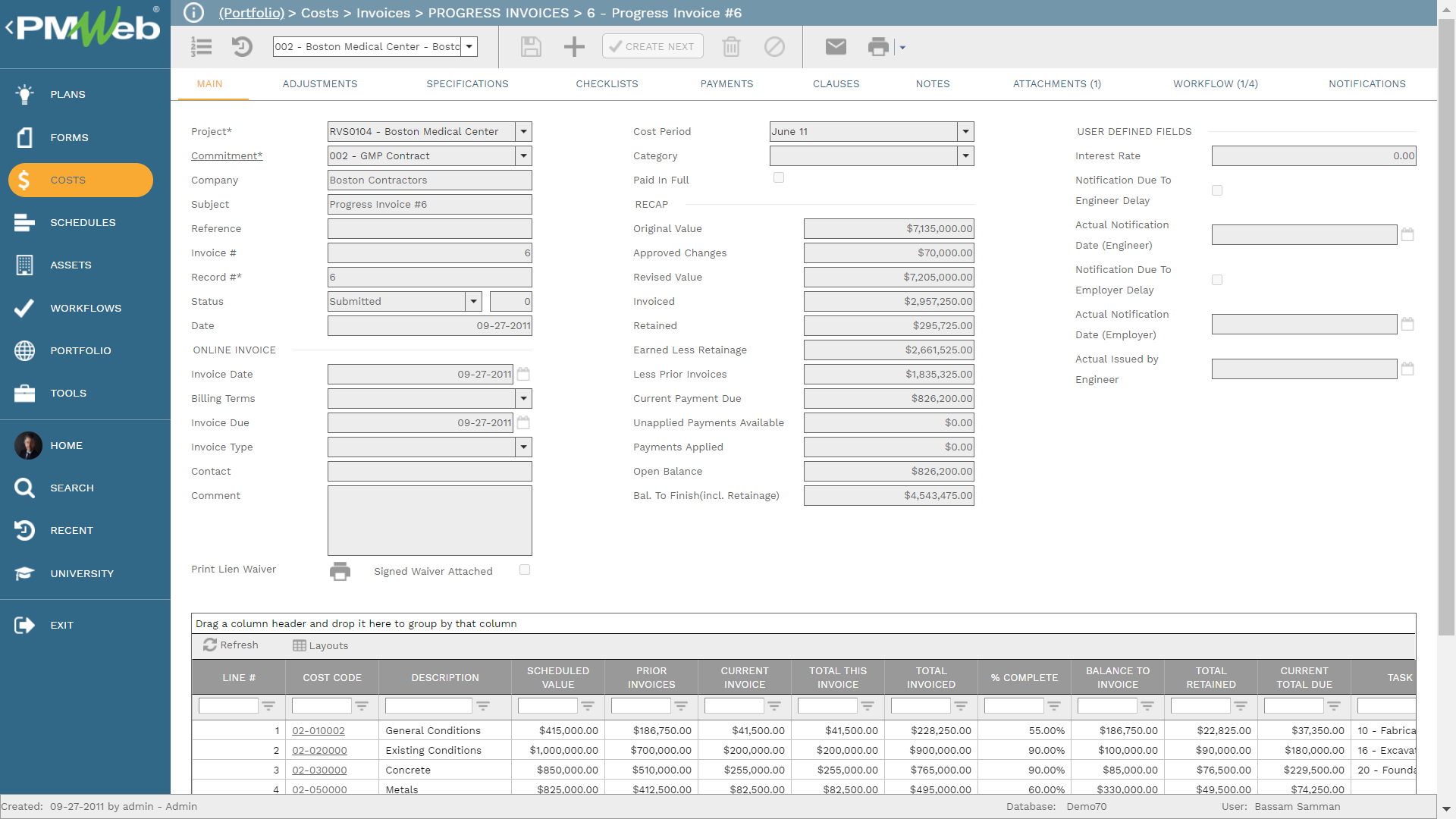 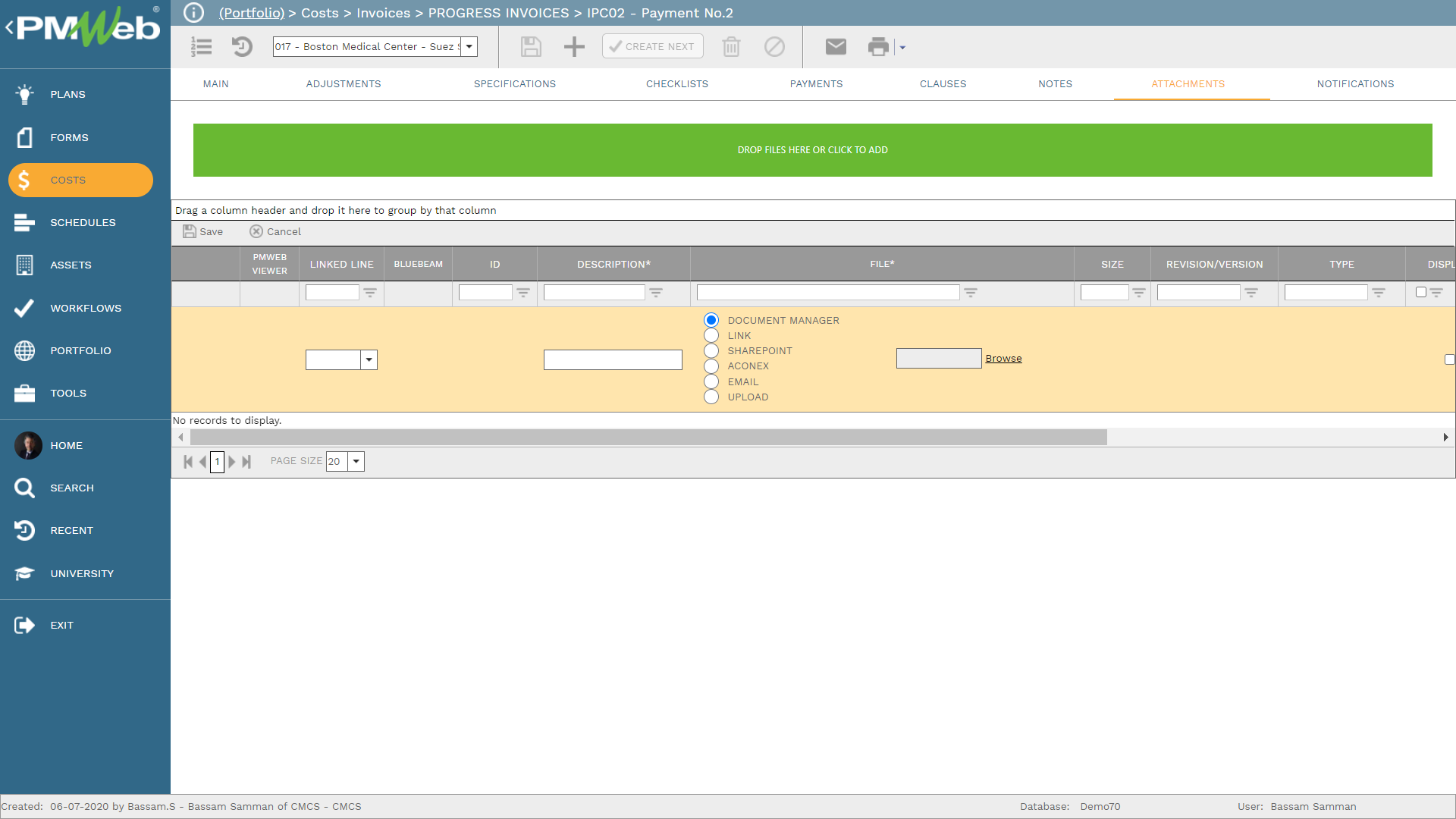 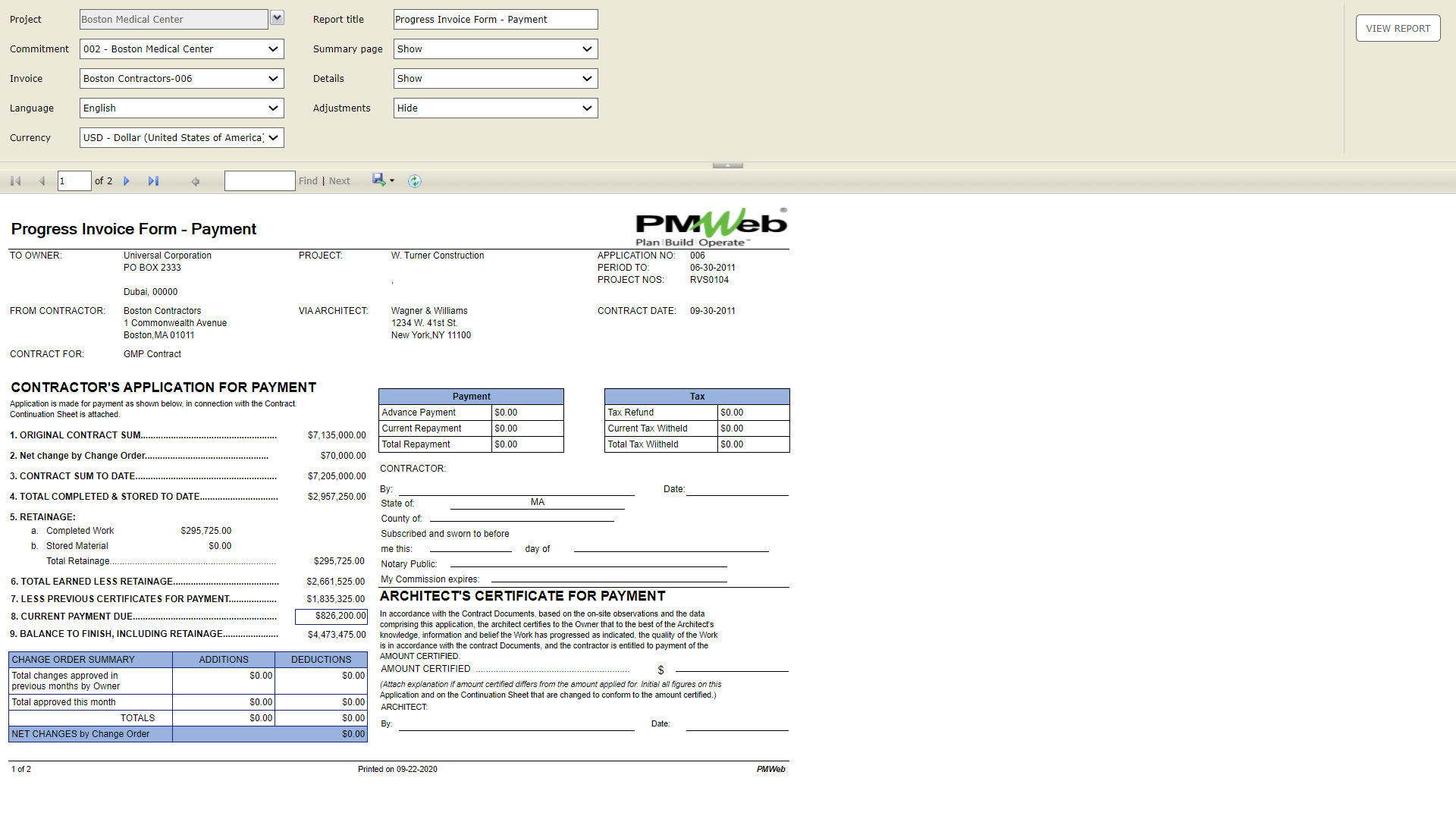 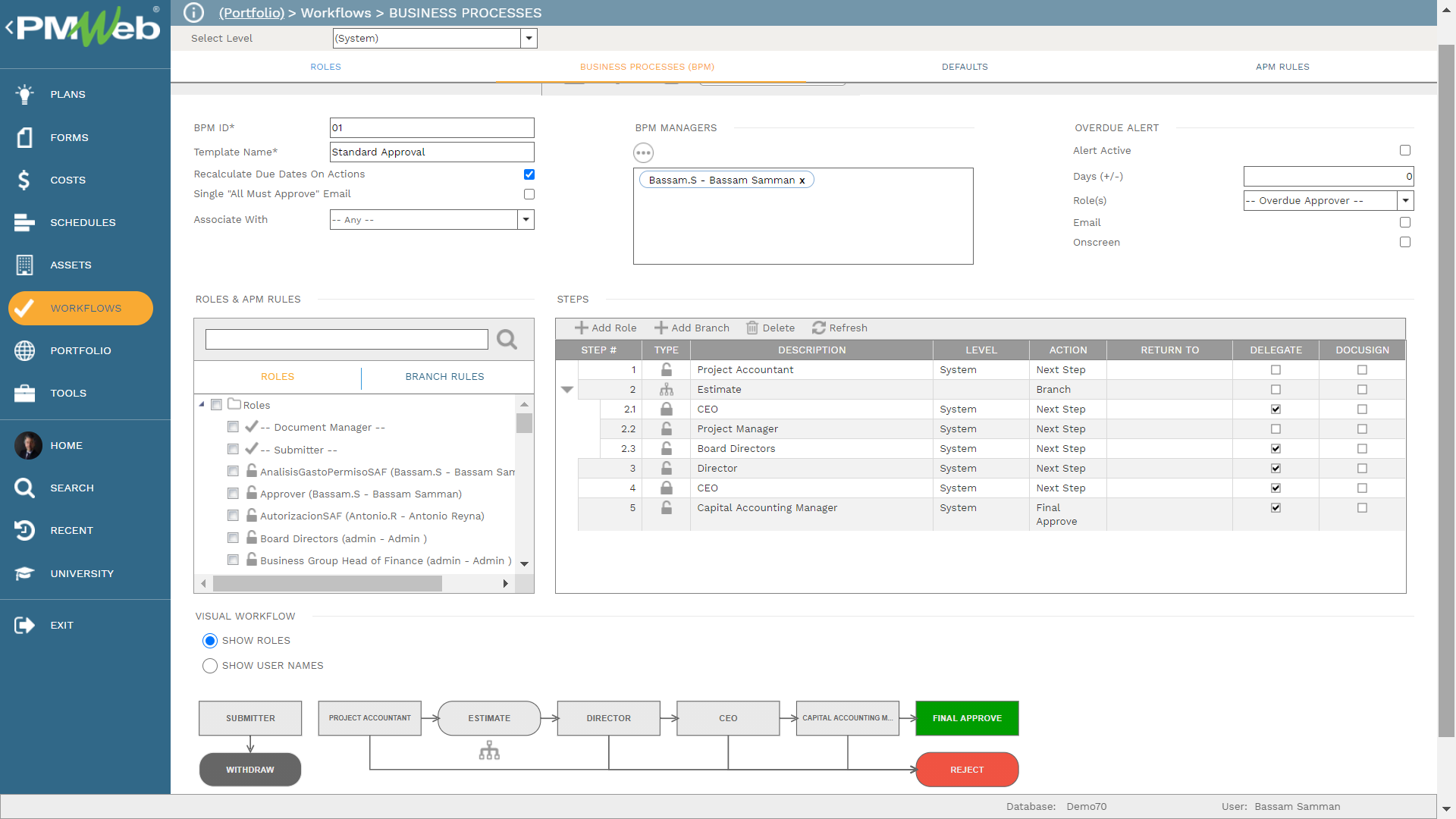 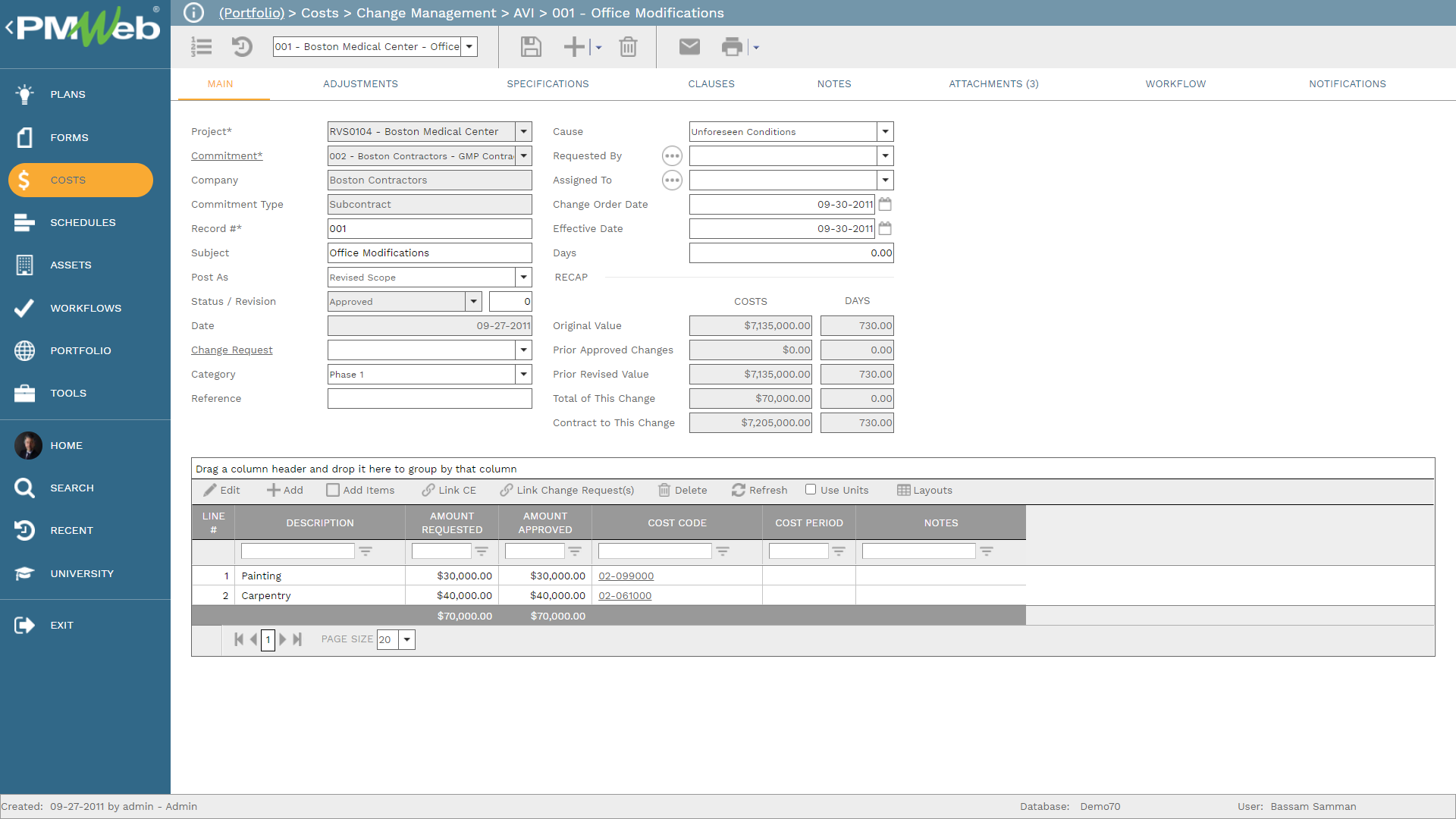 Another change management process that is available in PMWeb which is crucial for calculating an accurate and justifiable Estimate to Complete (ETC) value is the Potential Change Order module. This module enables the Contractor project team to have an early warning notification (EWN) system to capture the details of all potential changes that could impact the awarded value of commitment contracts. The Contractor can decide what potential change orders to be considered along with the selected pending and disputed change orders for each awarded commitment contract to adjust the Estimate to Complete (ETC) value. PMWeb allows assigning the period that those pending and disputed change orders values as well as potential changes to adjust the Estimate to Complete (ETC) curve that will be created by the project scheduling tool, like Primavera P6. 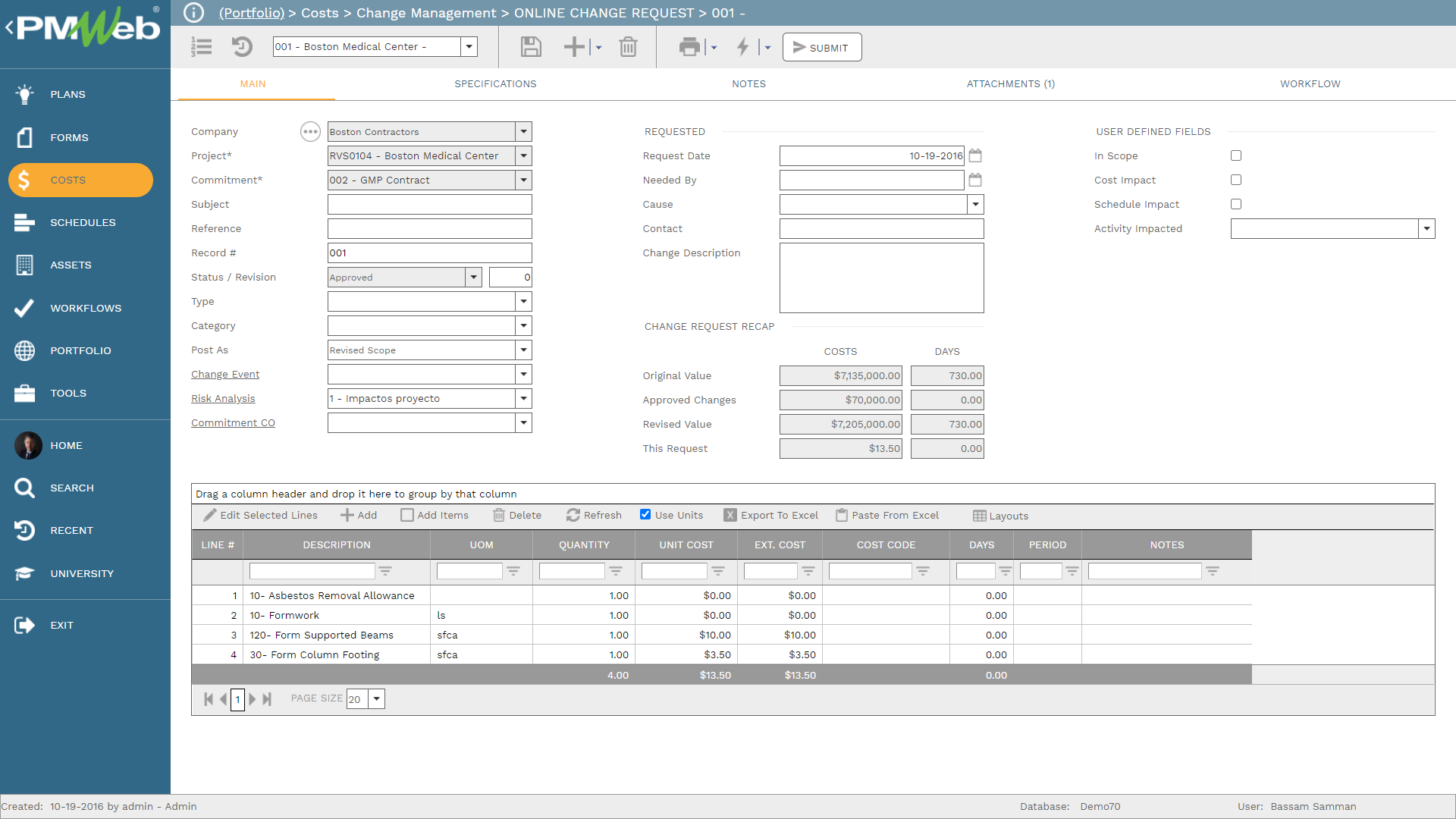 With all of this trust-worthy auditable actual cost information along with the Planned Values (PV) and Estimate to Complete (ETC) before adjustment that will be extracted from the project schedule, the Contractor could have a real-time single version of the truth earned value management (EVM) report that could be specific to a single project or the complete projects’ portfolio that the Contractor is delivering. 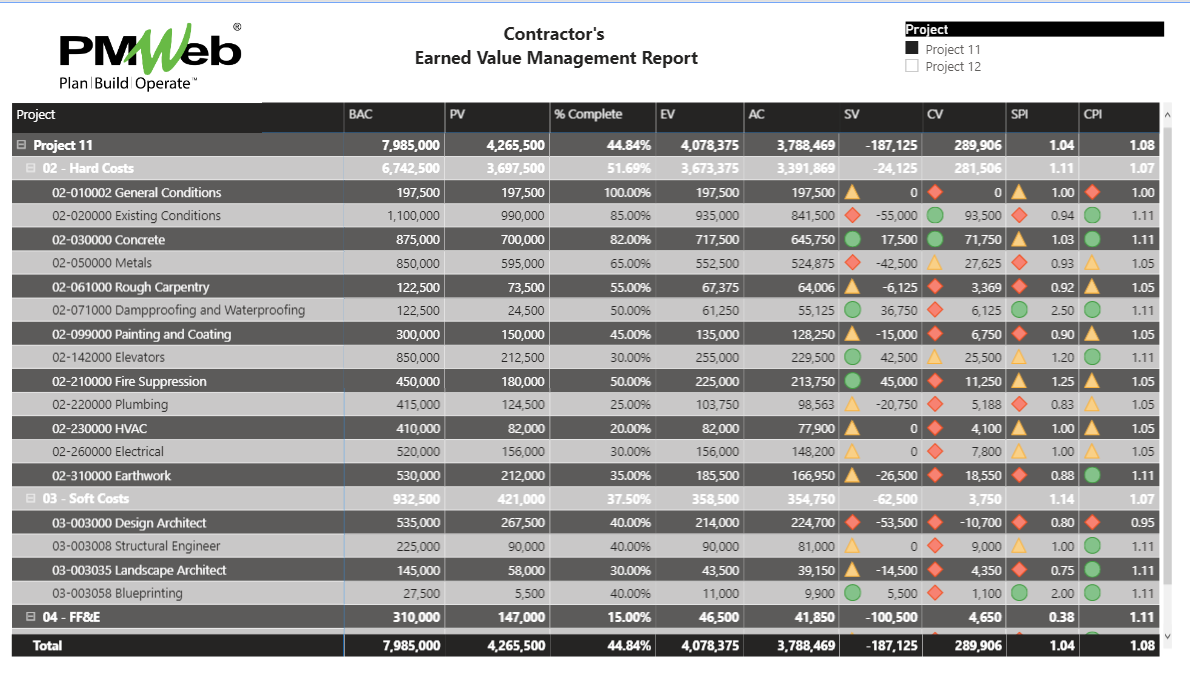