Article #288 Formalizing the Submit, Review and Approval of External and Internal Project Products and Services Deliverables 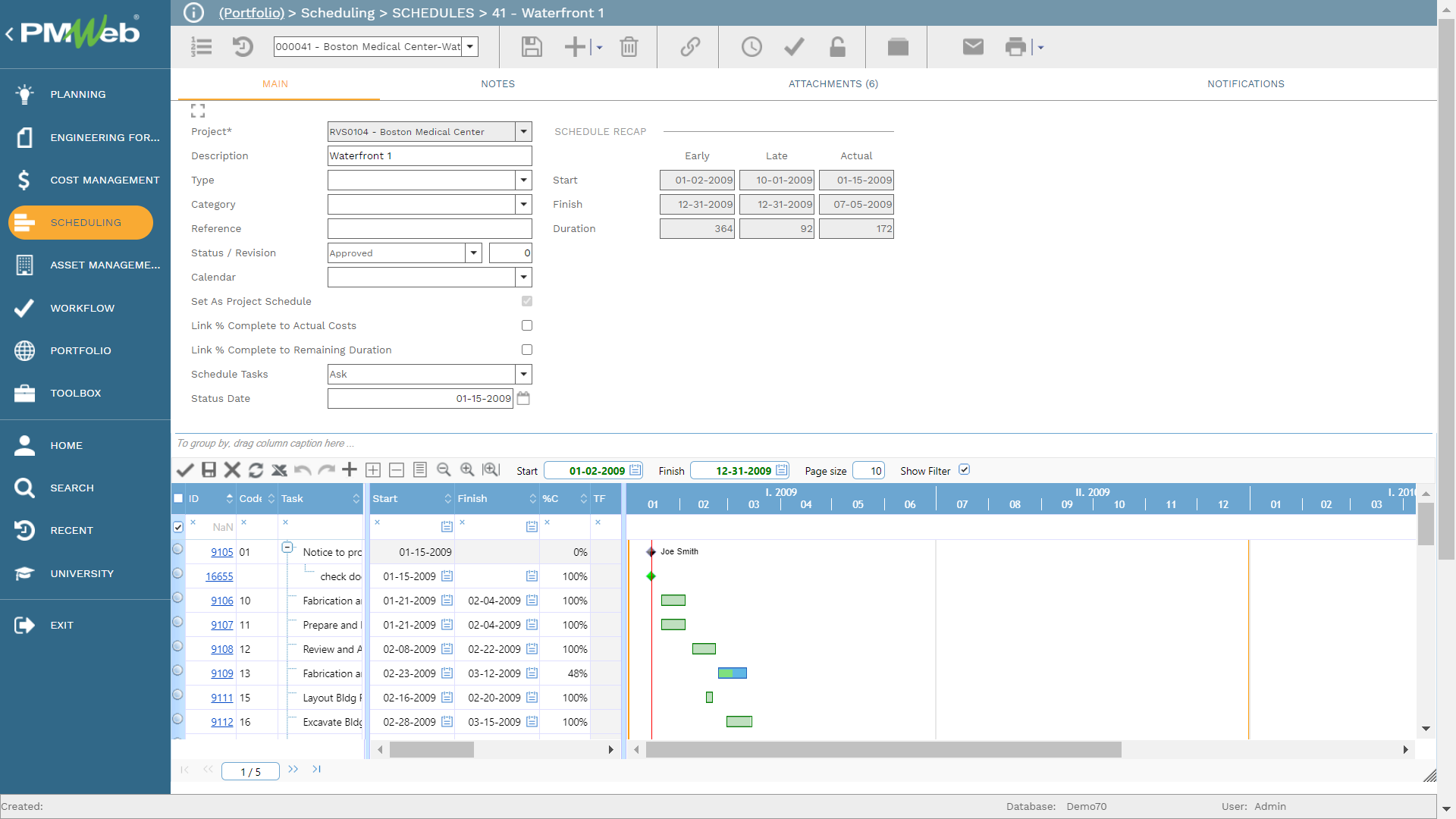 In addition, there is the option to import the project schedule from Primavera P6 or MS Project. Importing the project schedule into PMWeb is a common practice if the schedule was created by the consultant or contractor as well as if the Project Owner use Primavera P6 or MS Project for their planning and scheduling processes. Regardless of what application is being used, the schedule data must be imported to PMWeb.

To ensure that the cost of project deliverables is aligned with the Project Owner overall cost reporting, it is a must requirement to define the cost breakdown structure (CBS) which can be standard for all projects, for a program or for selected portfolio of projects or unique for every single project. PMWeb cost breakdown structure allows defining up to 16 levels of cost details although this is never used. For example, for generic projects that are being managed by the Enterprise Project Management Office (EPMO), there might be a need for a three-level cost breakdown structure. The first will be for the project management processes group like Initiating, Planning, Executing, Monitoring and Controlling and Closing whereas the second level will be for the project management knowledge areas which include Scope, Time, Cost, Quality, Communication, Risk, Procurement, Human Resources, Stakeholders and Integration. The third level will be project deliverables which are usually predefined.

PMWeb commitment module will be used to create all those contract agreements, external and internal, and the details of each product or service deliverable that are part of those contracts. Although PMWeb allows having lump and unit price contracts, nevertheless the option of lump sum contract will be used as deliverables are usually specific and not recurring during the project duration. PMWeb also allows multi-currency in case the value for some deliverables, products or services, could be in different currency than others. Each deliverable will be assigned the cost breakdown structure (CBS) value as defined earlier as well as the expected project period, or month, where this deliverable will be completed. 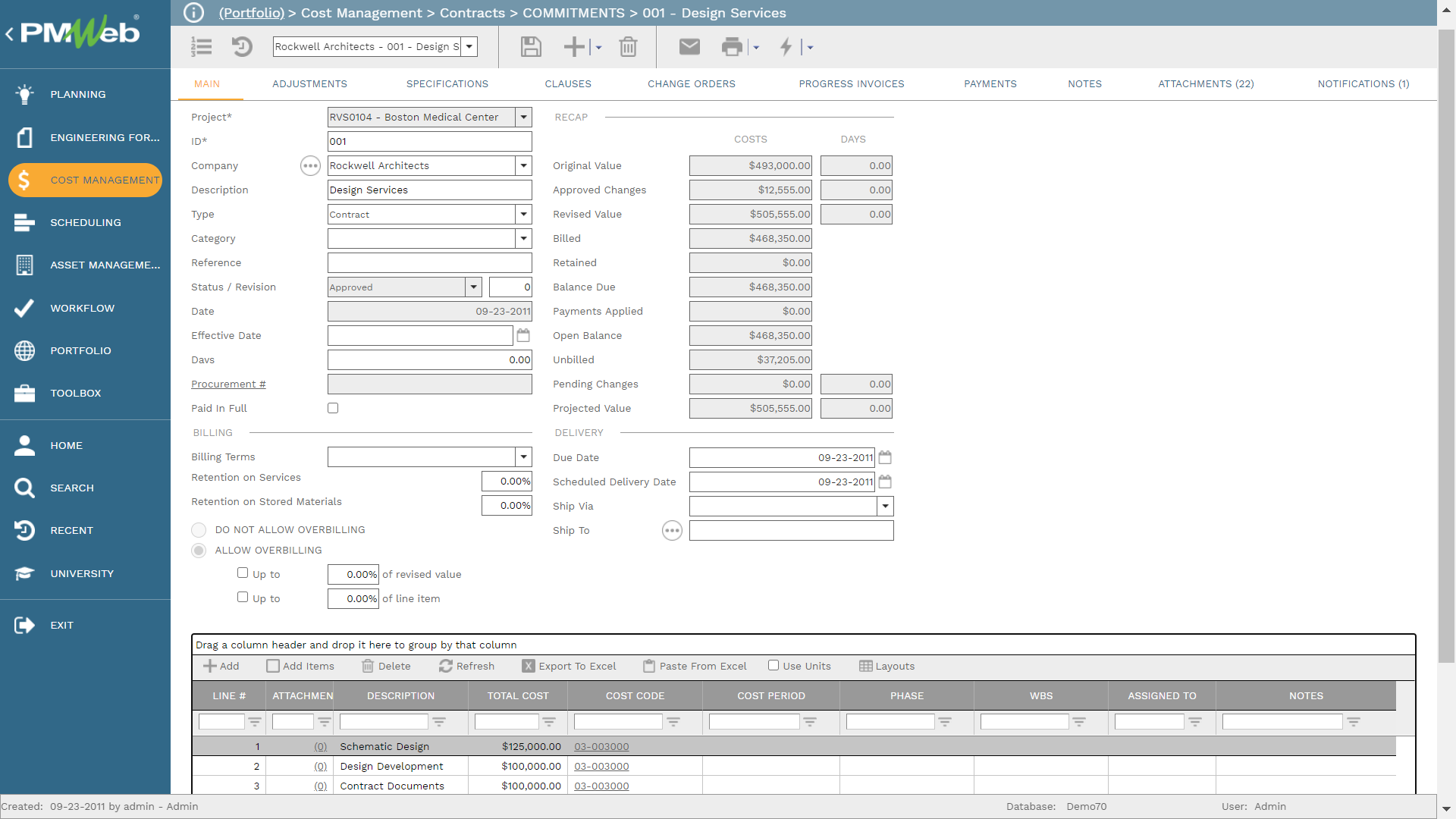 Some organizations might allow creating the deliverable document template, like for example the Project Charter, Stakeholder Assessment, Assumption List among many others in third applications like MS Work, MS Excel among others. This is a wrong practice as the knowledge included in those templates will be stored in fragmented data silos where not only the knowledge associated with this valuable information will be wasted but also has little control on data security and access permissions. Using PMWeb as the platform to develop the documents needed to review and approve those deliverables will ensure that all generated data is stored in a secured single database where access rights and permissions are defined and controlled.

Although PMWeb comes ready with many out of the box templates for some of the project deliverables like project cost estimate, project budget, risk register, organization chart among others, nevertheless, there will be always for many other documents that are not readily available in PMWeb. For those templates, PMWeb visual custom form builder will be used to create those forms to provide the data fields and tables to capture this information. Similar to other PMWeb templates, permission access rights can be assigned to who can access the template as well as the fields and tables that are part of each template. It should be noted that those deliverable templates created in PMWeb can be in any language including non-Latin languages like the Arabic language. 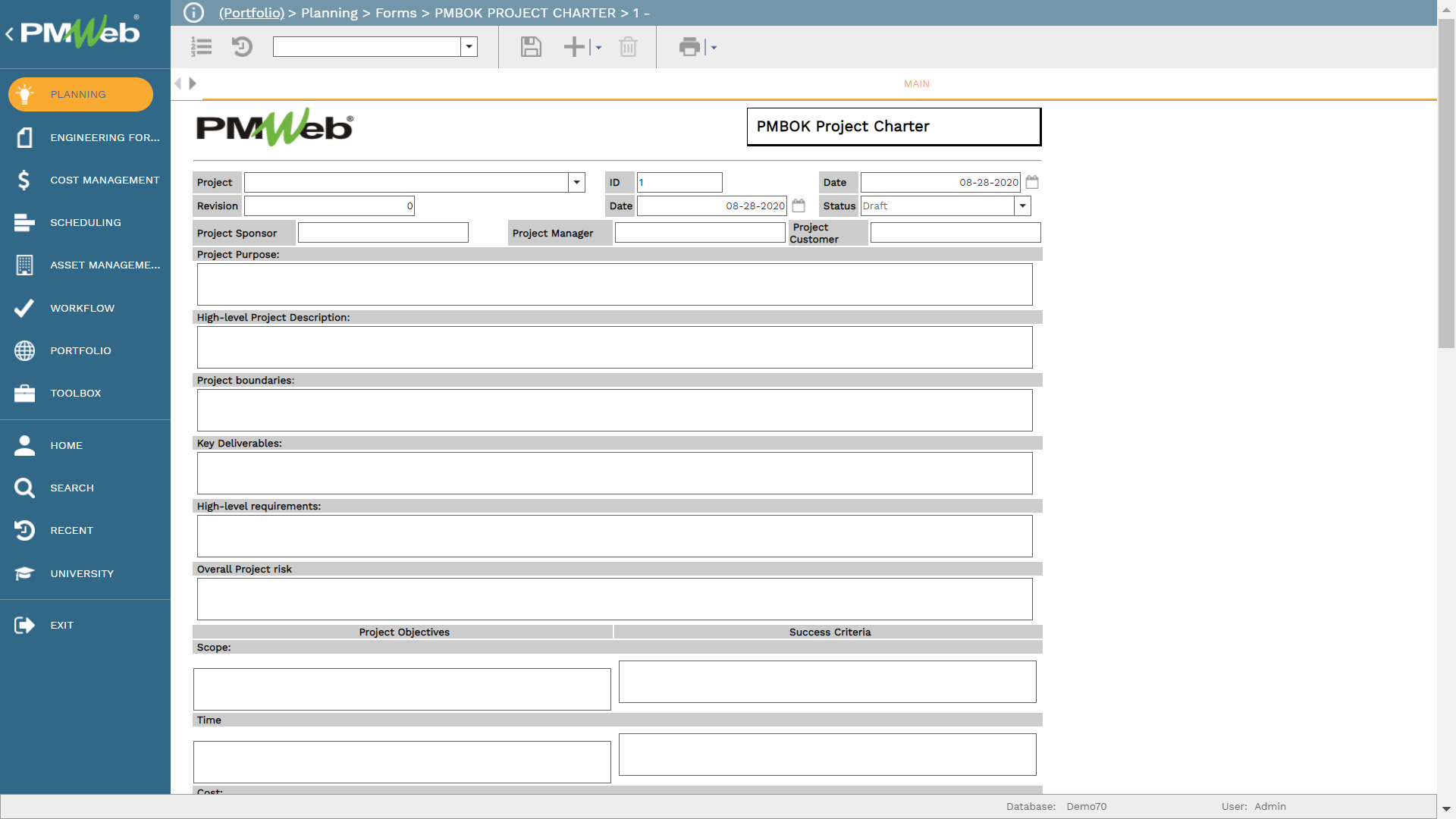 As the project progresses, the entities and individuals responsible for producing the project deliverables will perform all needed tasks to execute those deliverables. PMWeb progress invoice module will be used to submit the interim payment certificate (IPC) for completed deliverables. Each line item in the progress invoice can be linked with its relevant project schedule activity which will allow importing the percent complete of that activity into the progress invoice. In addition, PMWeb allows attaching all deliverable documents that were either uploaded and stored in PMWeb document repository or add upload direct to each line item to provide the needed prove of the completed and approved deliverable. PMWeb progress invoice module will keep track of issues invoices against each contract as well as automatically do the calculations of what was already invoiced and the balance due.

The payment tab which is part of the progress invoice module will be used to capture the details of actual payments made against each approved interim payment certificate. This will include the amount actually paid as well as details of the actual payment made. 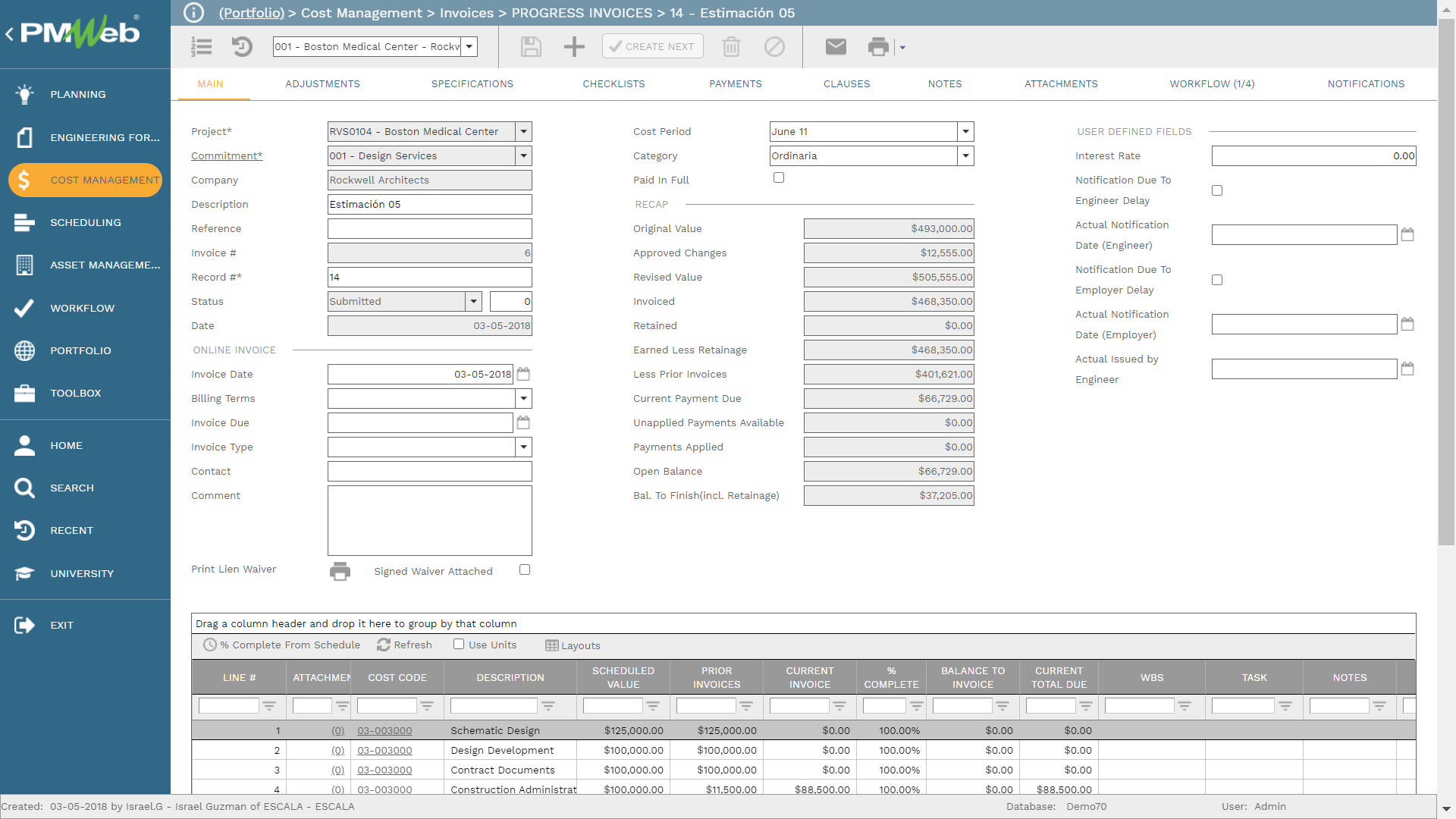 Similar to all contract agreements, changes could happen for varying reasons. For change orders that are due to project owner actions, the contractor or consultant could become entitled for a change order that could affect the awarded contract’s amount, completion date or both. PMWeb provides two ready-to-use processes to manage those changes. The first is the potential change order which is also considered by many as an early warning notification of a change which if approved would lead to the second process which is the change order process. Those ready-to-use processes will be used to capture the details of the change, cost and schedule impact and other needed details. 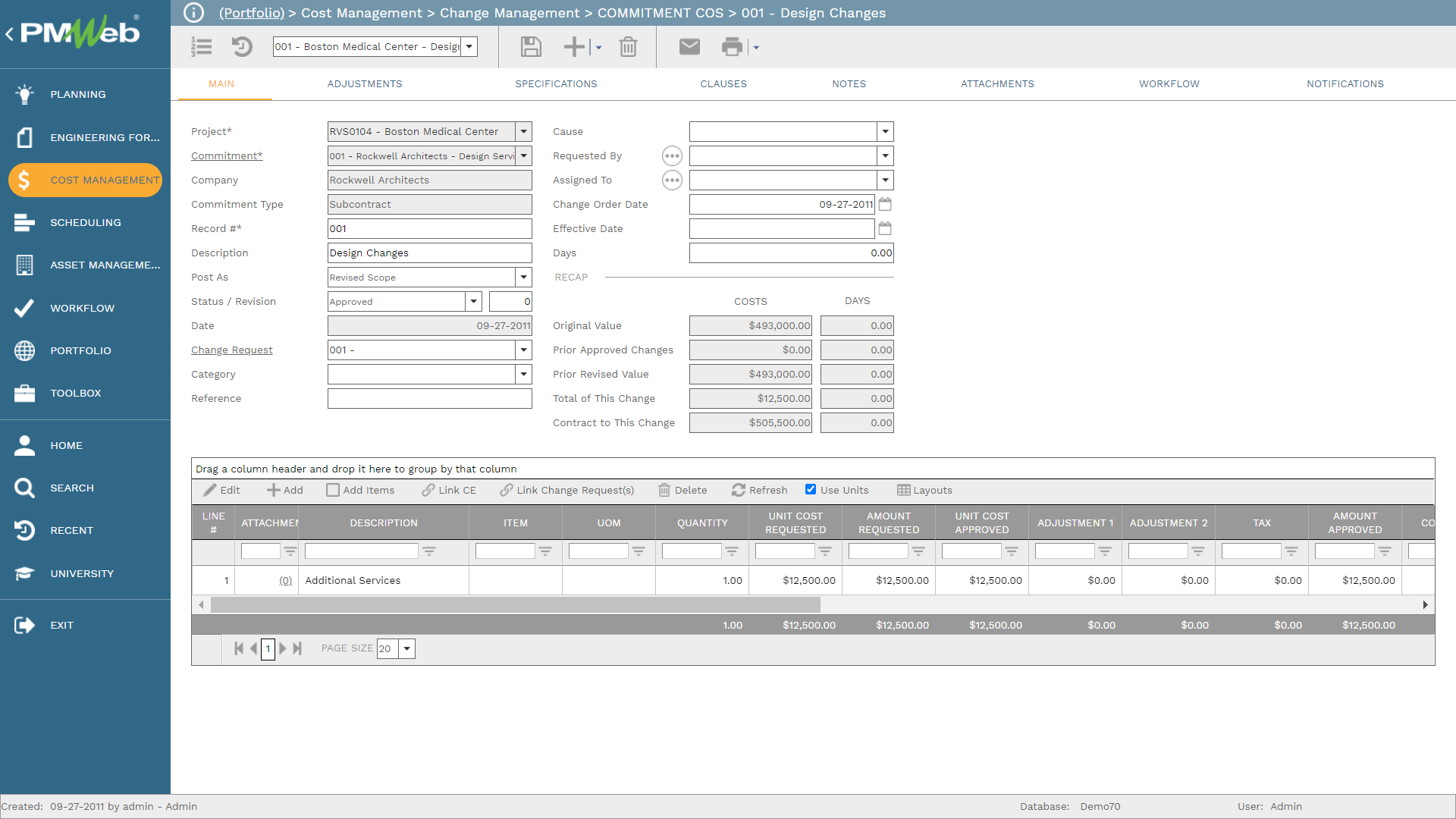 Similar to all other PMWeb project management processes, the approved baseline schedule, approved schedule updates, deliverables, baseline contract, potential change orders, change orders and progress invoices can be attached will all supportive documents that will be usually uploaded and stored in PMWeb document management repository. In addition, links to relevant PMWeb records and imported MS Outlook emails can be added to each process transaction. 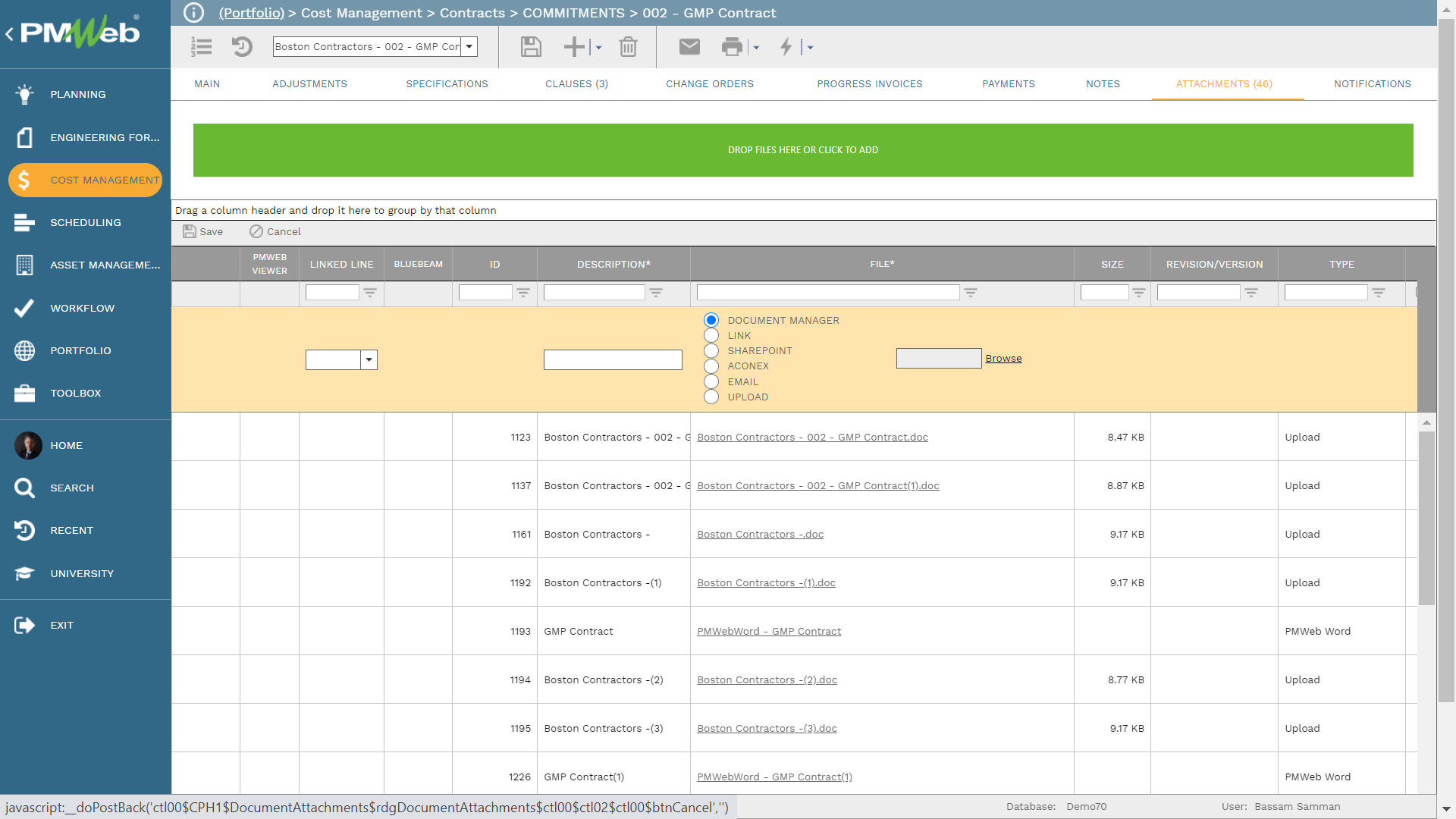 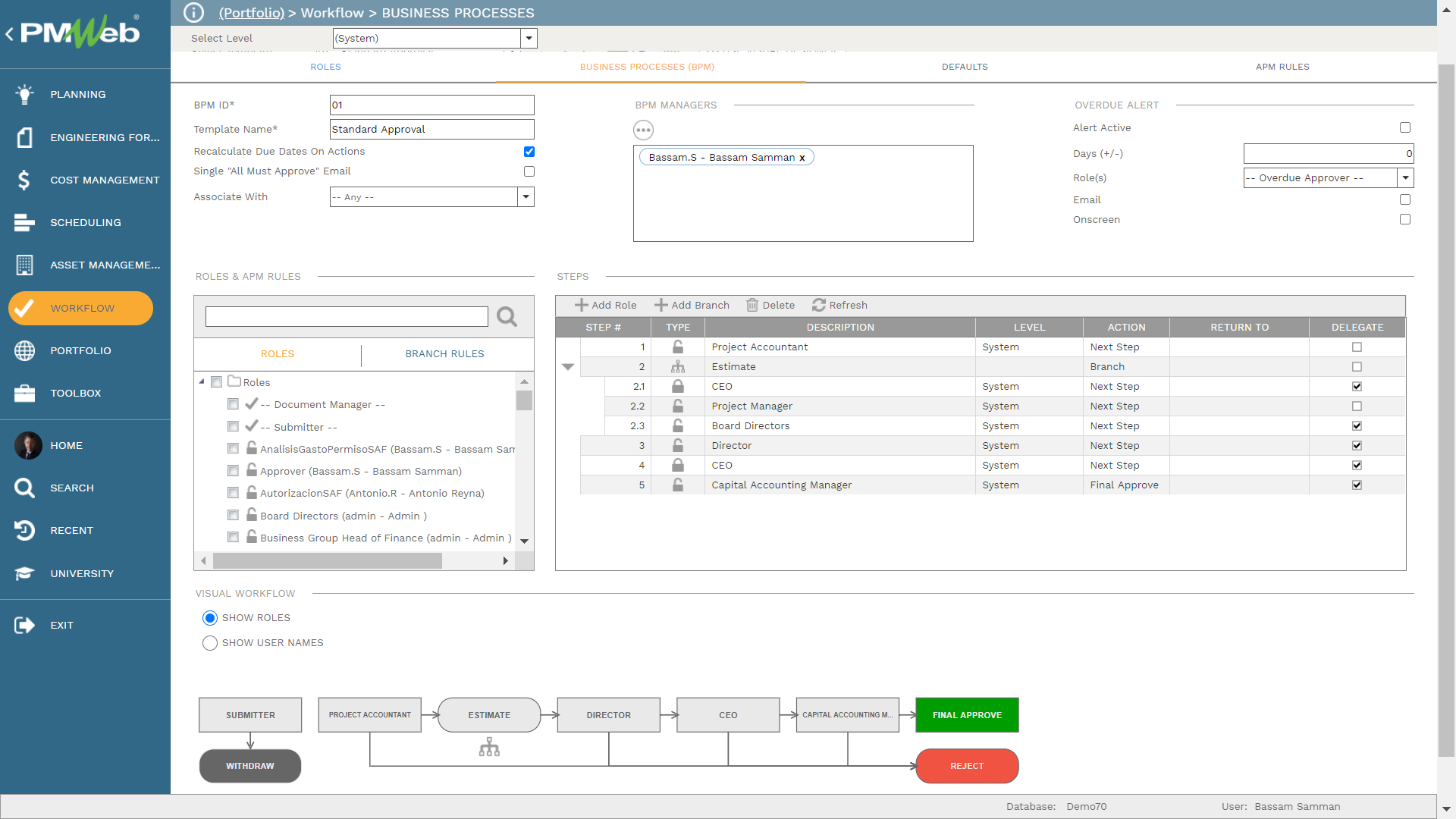 PMWeb comes ready with many of output forms and reports for the different processes managed in PMWeb with the option for each entity to create their own output forms, reports and dashboards in their desired form, format and color branding. Those forms can be configured to be digitally signed using PMWeb DocuSign integration module. In addition, the captured PMWeb data can be consumed by Business Intelligence and Data Visualization applications like MS Power BI to create interactive reports and dashboards. PMWeb reports and dashboards can be also designed to allow drilldown to review information at the desired granular level.