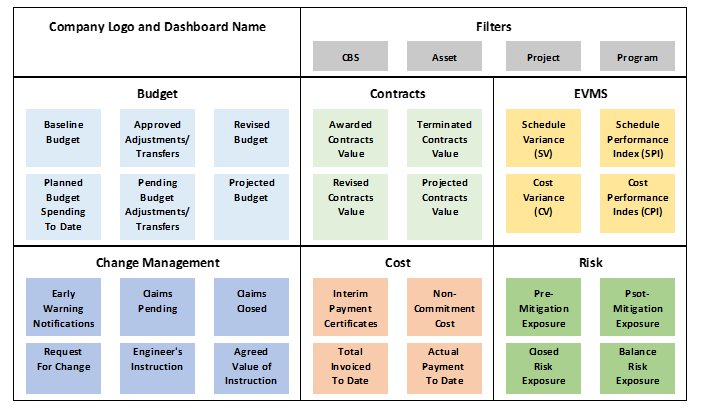 For real estate developers, private equities and other entities who invest in capital construction projects always need to have real-time single version of the truth dashboard to monitor and evaluate the commercial performance status of those projects. The commercial performance dashboard needs to report on the project or projects’ budget, contracts, changes, costs and risks’ cost exposure. The information presented in the dashboard should be trust-worthy, real-time, traceable and auditable. The reader of this information needs to be able to select the commercial information that could be specific to a program of projects, specific projects, specific assets of a project and to a specific cost breakdown structure (CBS) level.

Real estate developers, private equities and other entities need to access this information anytime, anywhere using any device. Of course, there will be other dashboards that address other aspects of the capital construction projects delivery such as schedule, procurement, quality, health and safety, sustainability among others.

Accordingly, the first step in having the integrated cost management system is to have the cost breakdown structure (CBS) defined. Great care needs to be given to the created cost breakdown structure as it will become the basis for monitoring, evaluating and reporting the real estate development commercial performance. PMWeb allows having up to 16 levels for the cost breakdown structure although usually the levels used would not exceed 8 levels even for mega real estate development programs. For example, the CBS levels could include the levels for programs, projects within a program, buildings or assets with a project, building function or system, bid packages and control accounts. The CBS will become the basis for filtering, sorting, grouping and summarizing the commercial information across the complete project’s portfolio. 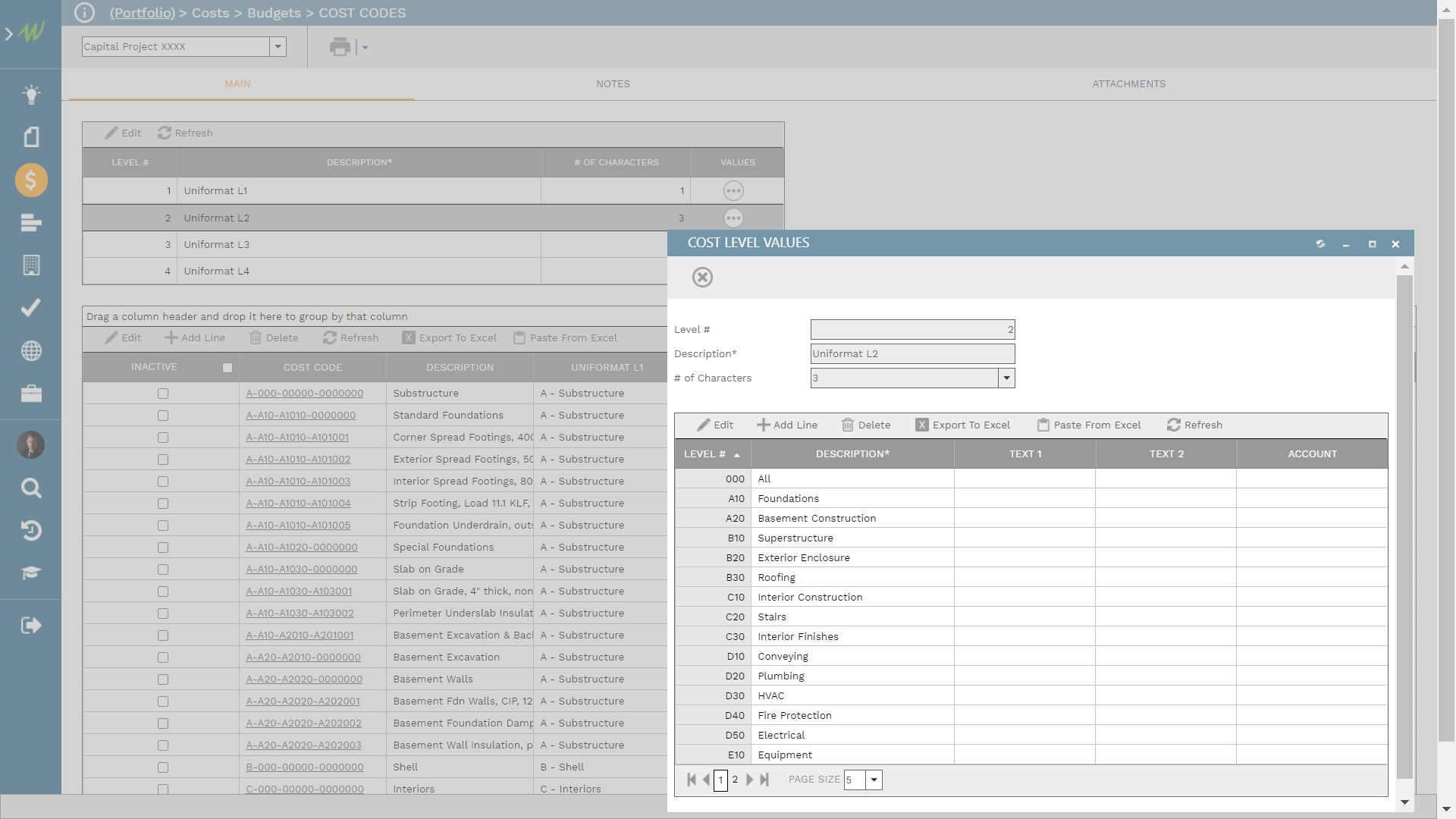 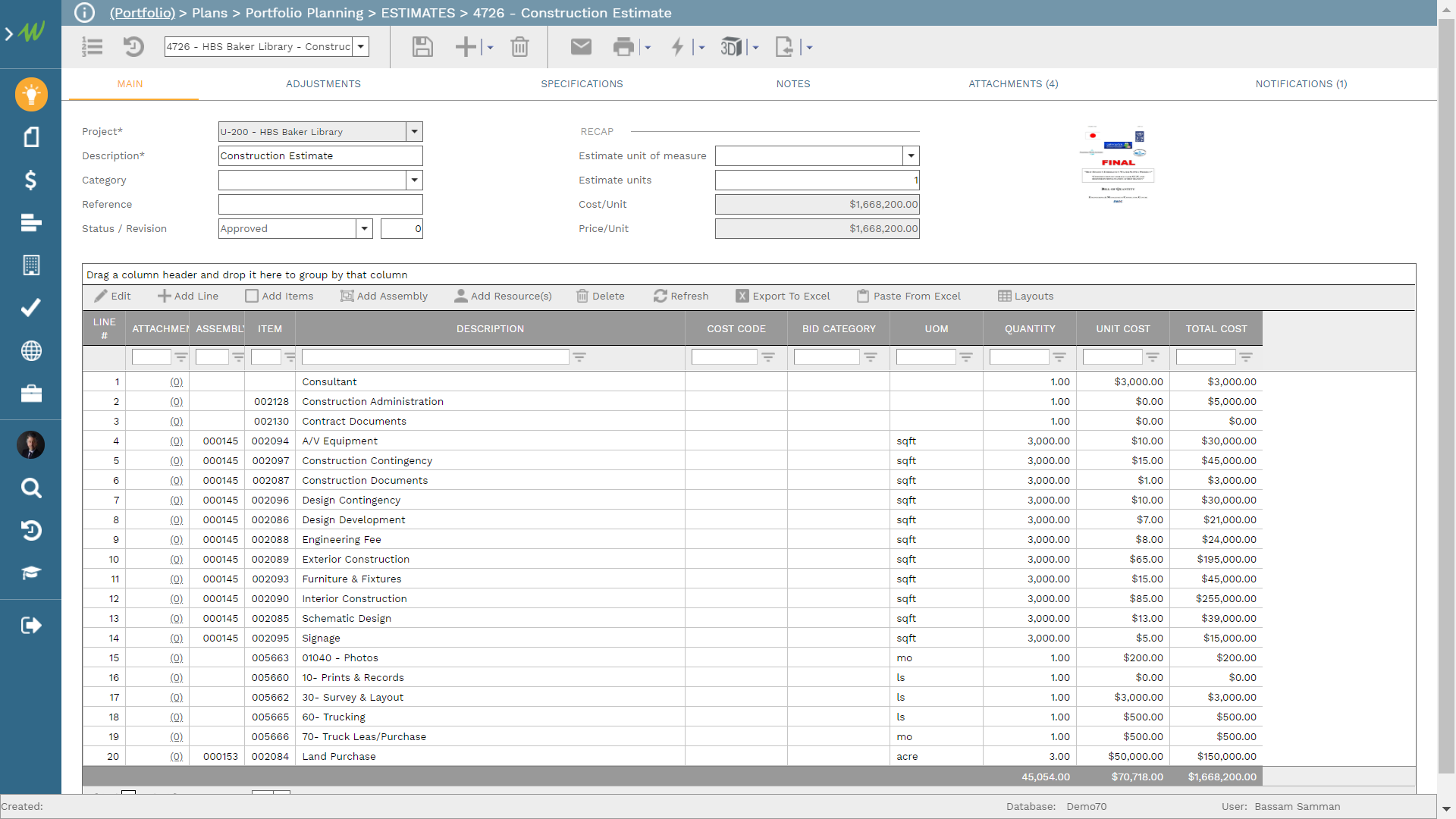 Using the approved cost estimate, PMWeb will allow generating the project’s budget. The budget cost centers will automatically combine the cost estimates line items that share the same cost breakdown structure levels. In case the budget needs to have different currencies for certain CBS levels, then this is possible. PMWeb allows having static as well as dynamic currency exchange rates that could have an impact on the overall budget amount. PMWeb budget module allows capturing all budget versions although only one version could have the status as approved while other versions need to be withdrawn. 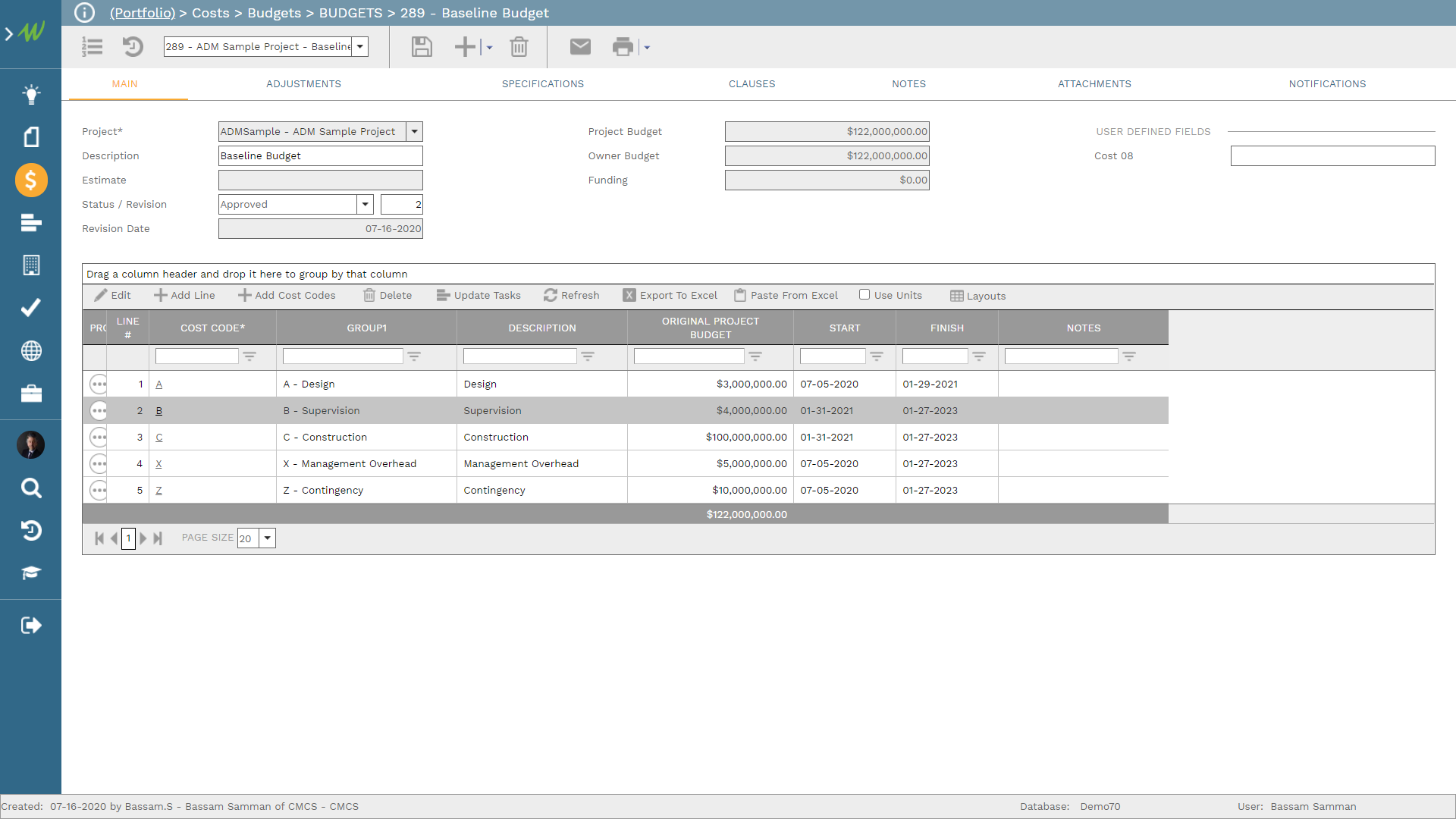 For each budget line item, the anticipated spending plan needs to be defined as this is a requirement for establishing the project budget spending outflow. PMWeb allows doing this projection by selecting the start and end dates of each budget line item and one of the budget distributions curves which could be straight, front loaded, back loaded and bell shaped. Of course, it is also possible to distribute the budget amount manually per period. 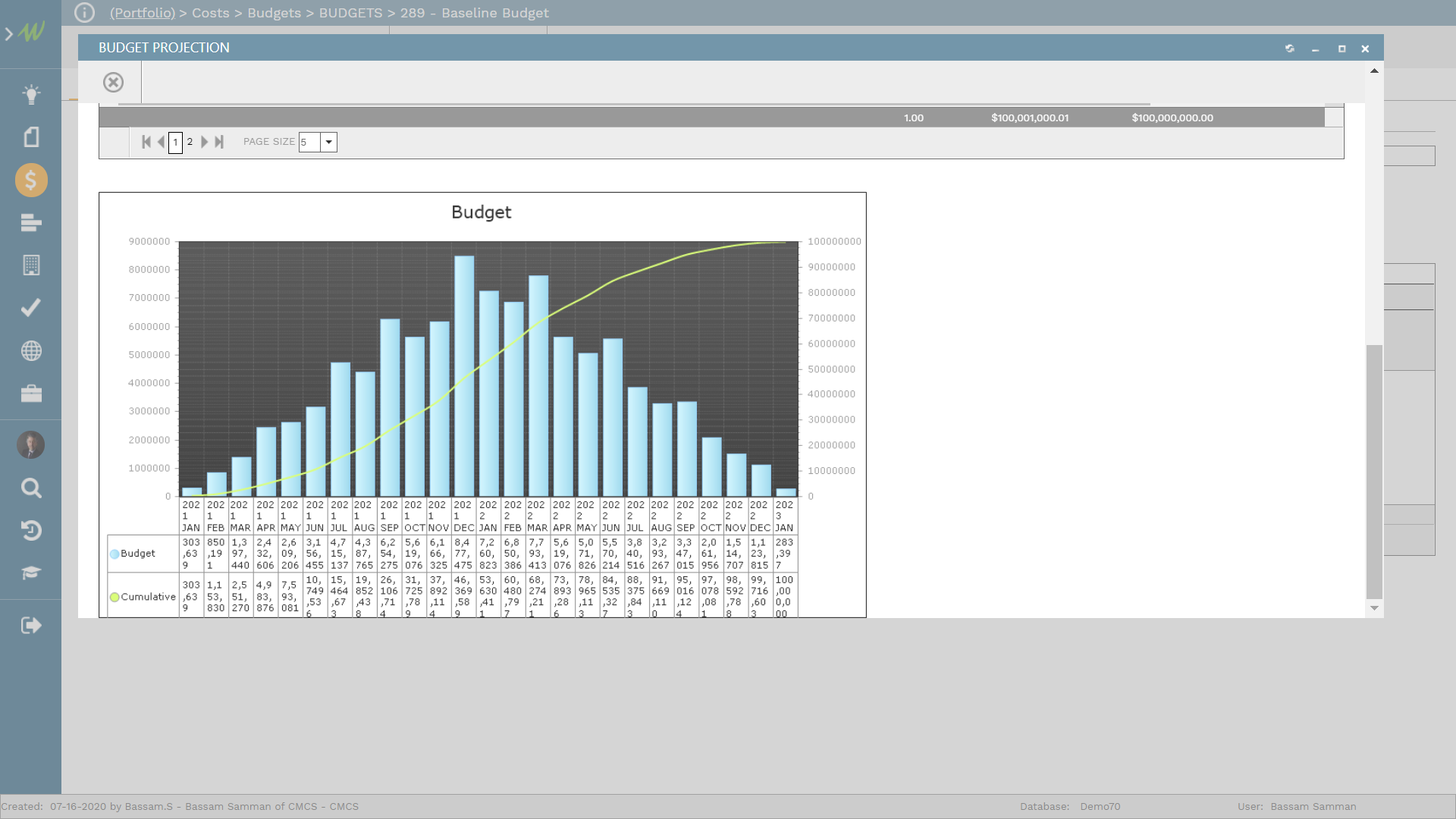 After approving the baseline budget, any changes to budget in terms of increasing or decreasing the allocated funds due to increased scope, reduced scope or simply transfer funds from one budget cost center to another, within the same project or across multiple projects will be done using PMWeb budget request module. PMWeb budget request module will be used to capture all pending and approved budget adjustments and transfers. All budgets and transfers need to be distributed to their relevant cost breakdown structure as well as the financial period where this adjustment needs to be displayed. The approved changes and transfers will be used to calculate the revised budget. All remaining pending approval changes and transfers will become the basis for calculating the projected at completion budget value. 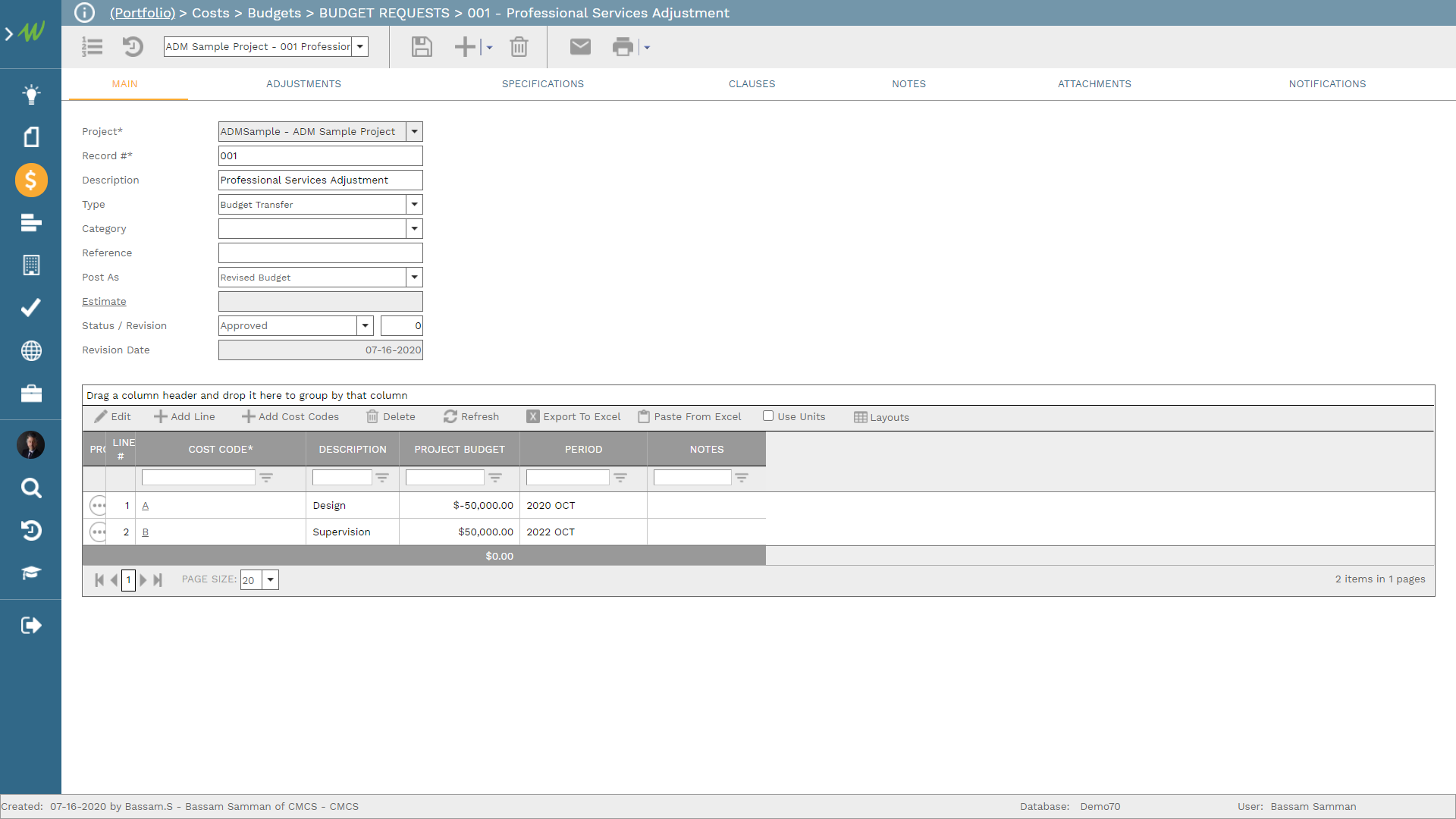 The next step is to capture all awarded contract agreements with the engineering consultants, supervision consultants, project management consultants, contractors, main suppliers among others. The awarded value of each contract will be distributed to its relevant CBS level. The contract’s detailed schedule of value or bill of quantities and other contract documents including drawings, specifications, agreement, conditions of contract, performance bonds, insurances among others will be scanned and uploaded into PMWeb document management repository and then attached to the contract agreement.

PMWeb will be used to report on all current and terminated contracts. In addition, the revised contract value and projected at completion contract value will be automatically calculated based on the information captured in the change management processes. 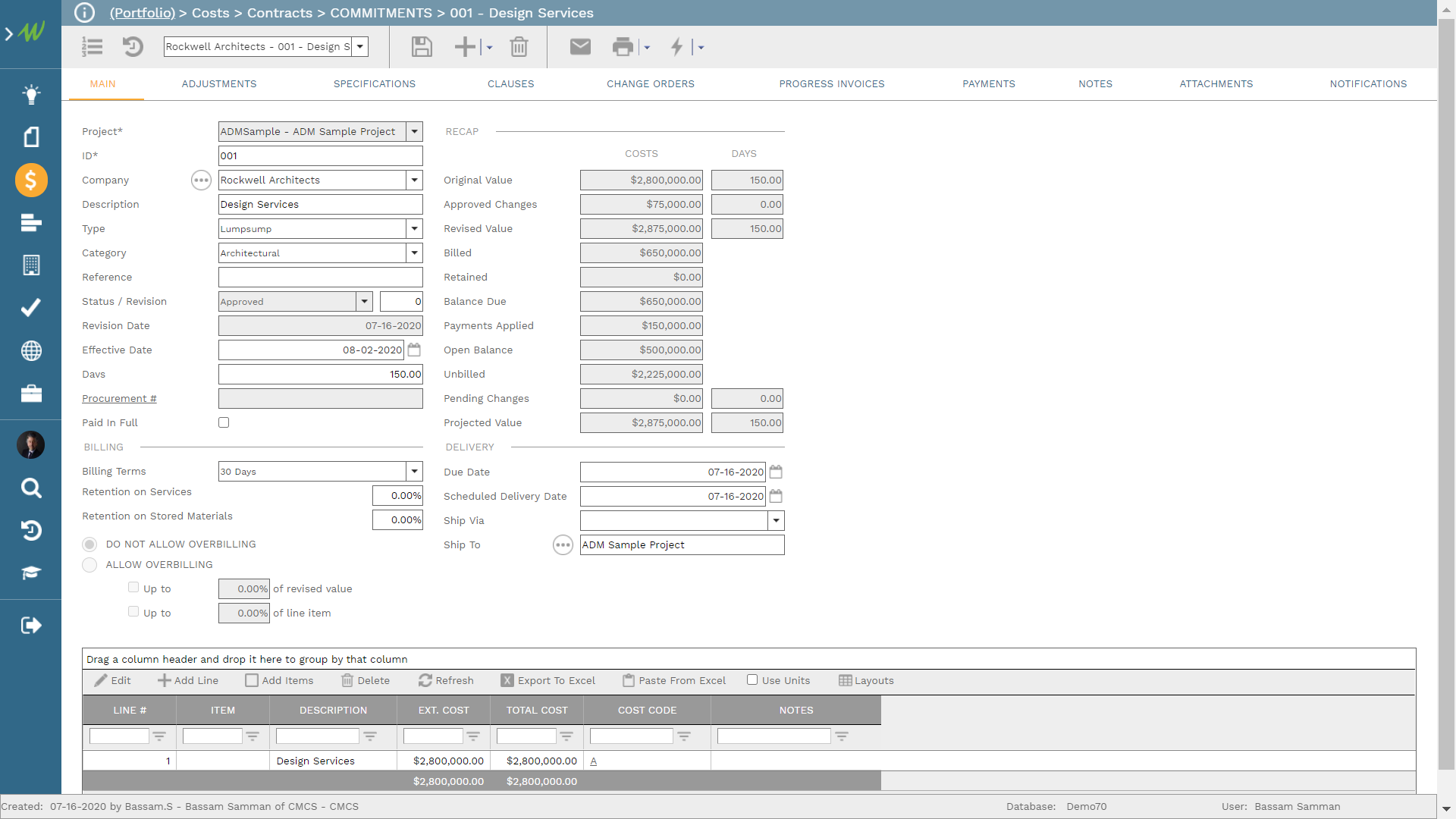 PMWeb potential change module will be used to capture the details of Request for Change (RFC) and Engineer’s Instruction (EI). The potential change order module can be also used to capture the details of other cost related processes that such as Early Warning Notifications (EWN) and possible cost savings from Value Engineering (VE) proposals. Access rights for this module could be extended to the Engineer and Contractors in case they allowed to post those transactions direct into PMWeb. 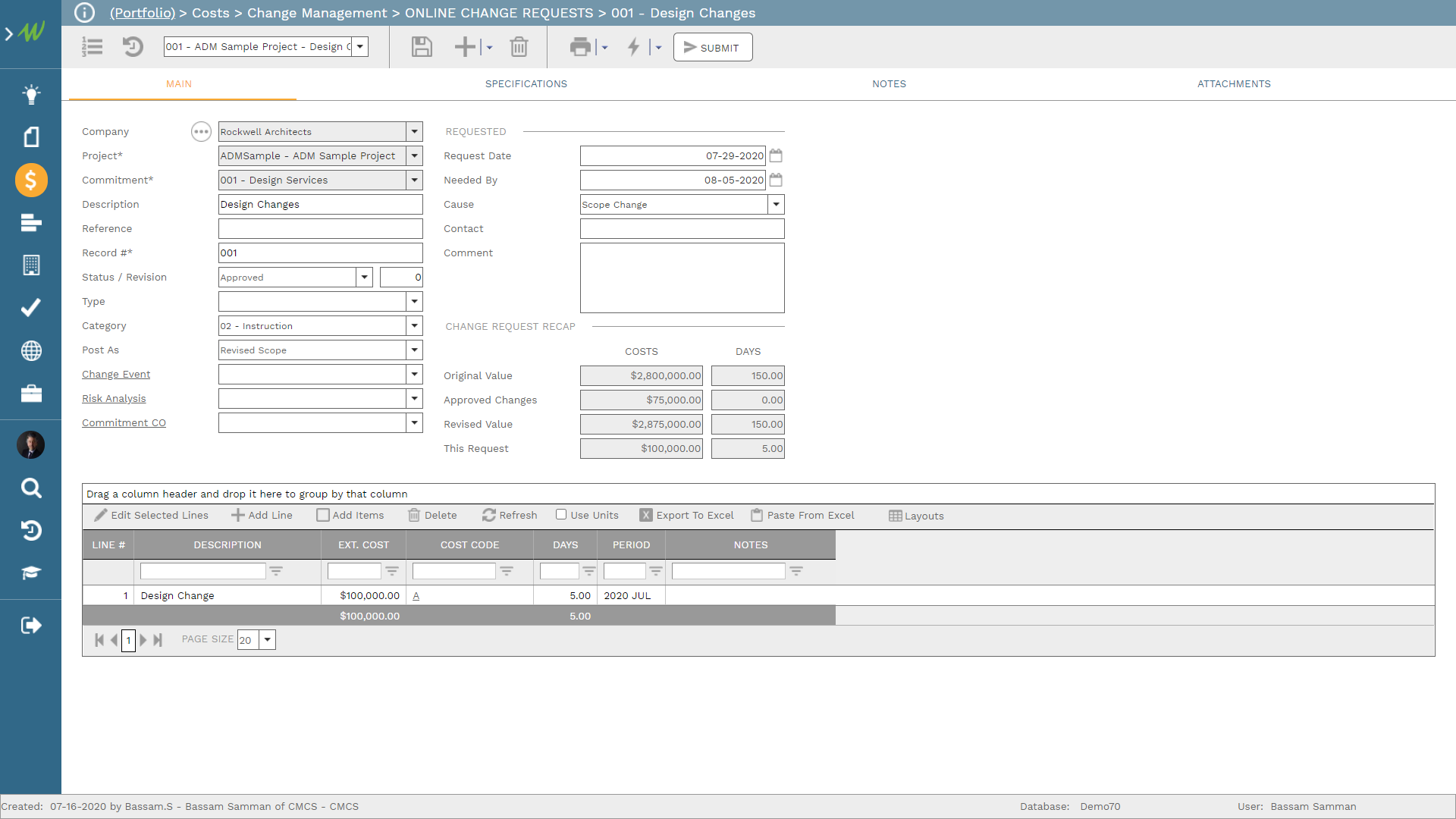 For Approved Variation Instruction (AVI), PMWeb commitment change order module will be used. The AVI could be configured to allow generating AVIs from approved Request for Change (RFC) and Engineer’s Instruction (EI). The AVI will include the cost and time impact of the change. In addition, the cost part will be associated with the relevant cost breakdown structure levels. 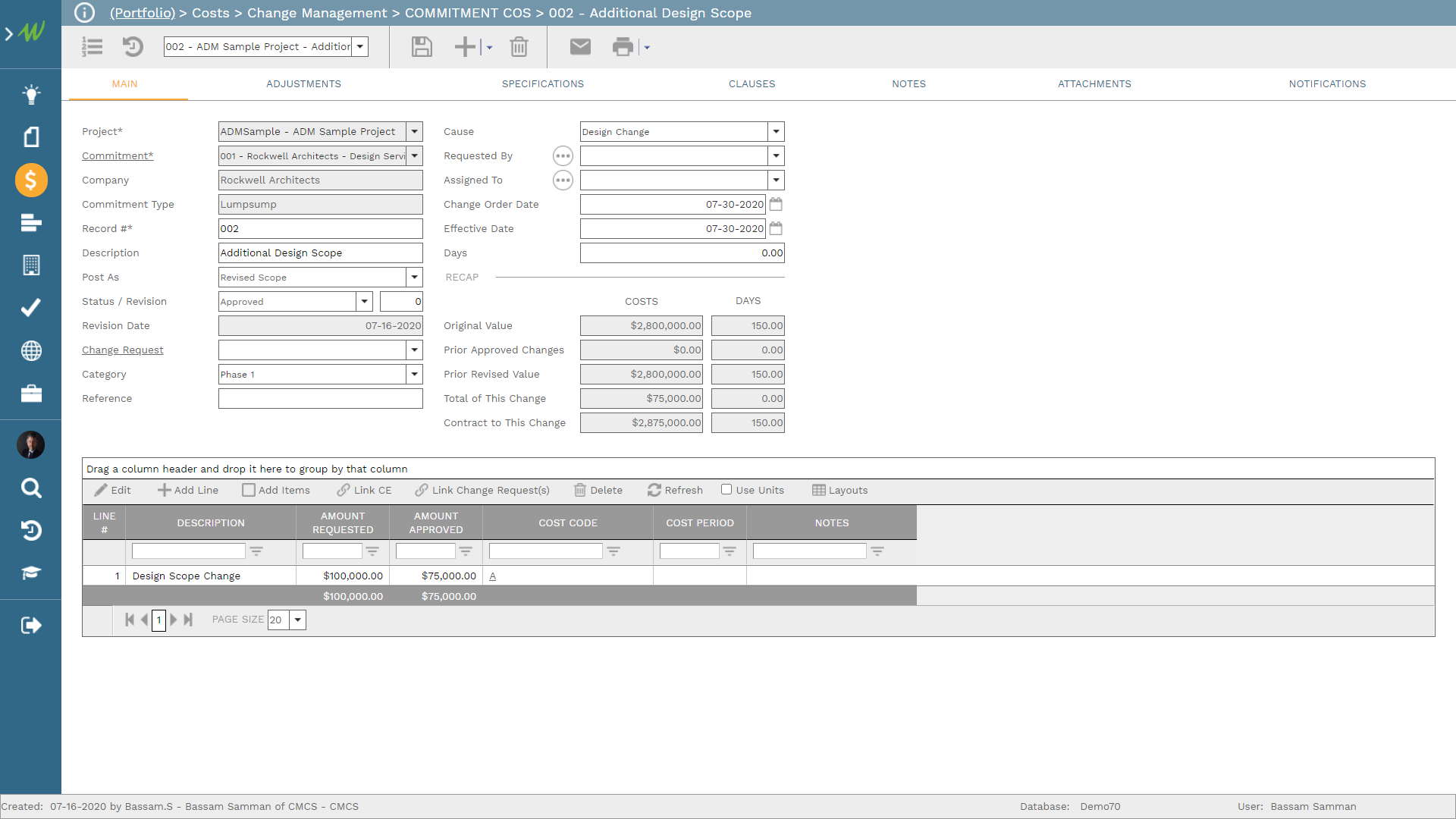 Finally, for all claims submitted by consultants and contractors, PMWeb change event module will be used to capture this information. This is recommended as usually the consultants’ or contractors’ claim submissions would include a lot of documents and communications that need to be reviewed before a decision is made. 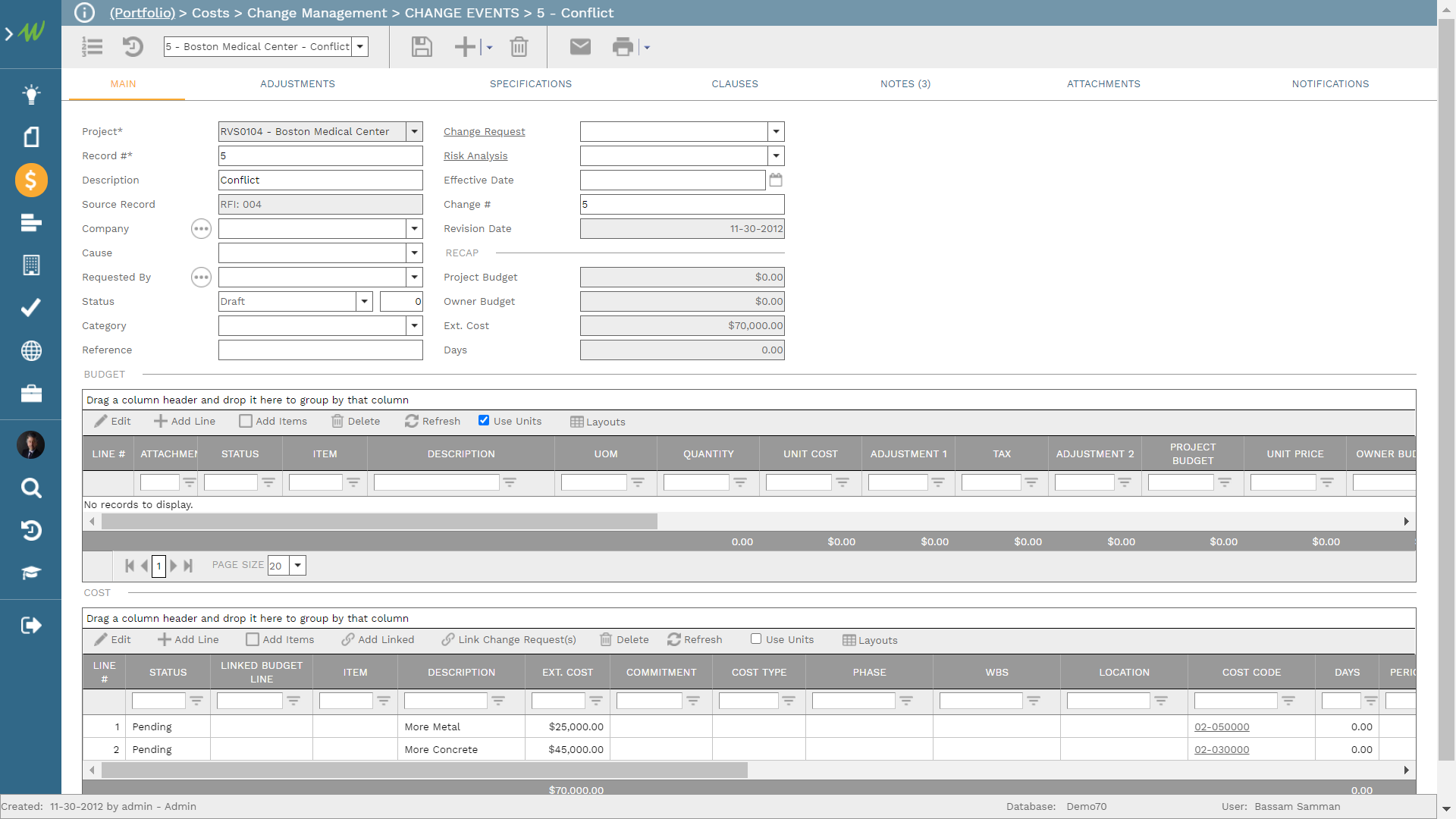 Each one of those modules could have its own workflow process for submitting, reviewing, approving or rejecting the transaction. The status of those records which will be aligned with the workflow could be submitted, returned, rejected, withdrawn, approved among others. Of course, the same principles of workflow design would apply on all other processes including cost estimate, budget, budget requests, commitment contracts among others. PMWeb visual workflow module allows temporary and permanent delegation of work review steps when needed. In addition, the workflow steps can be integrated with DocuSign digital signature if this is a requirement. 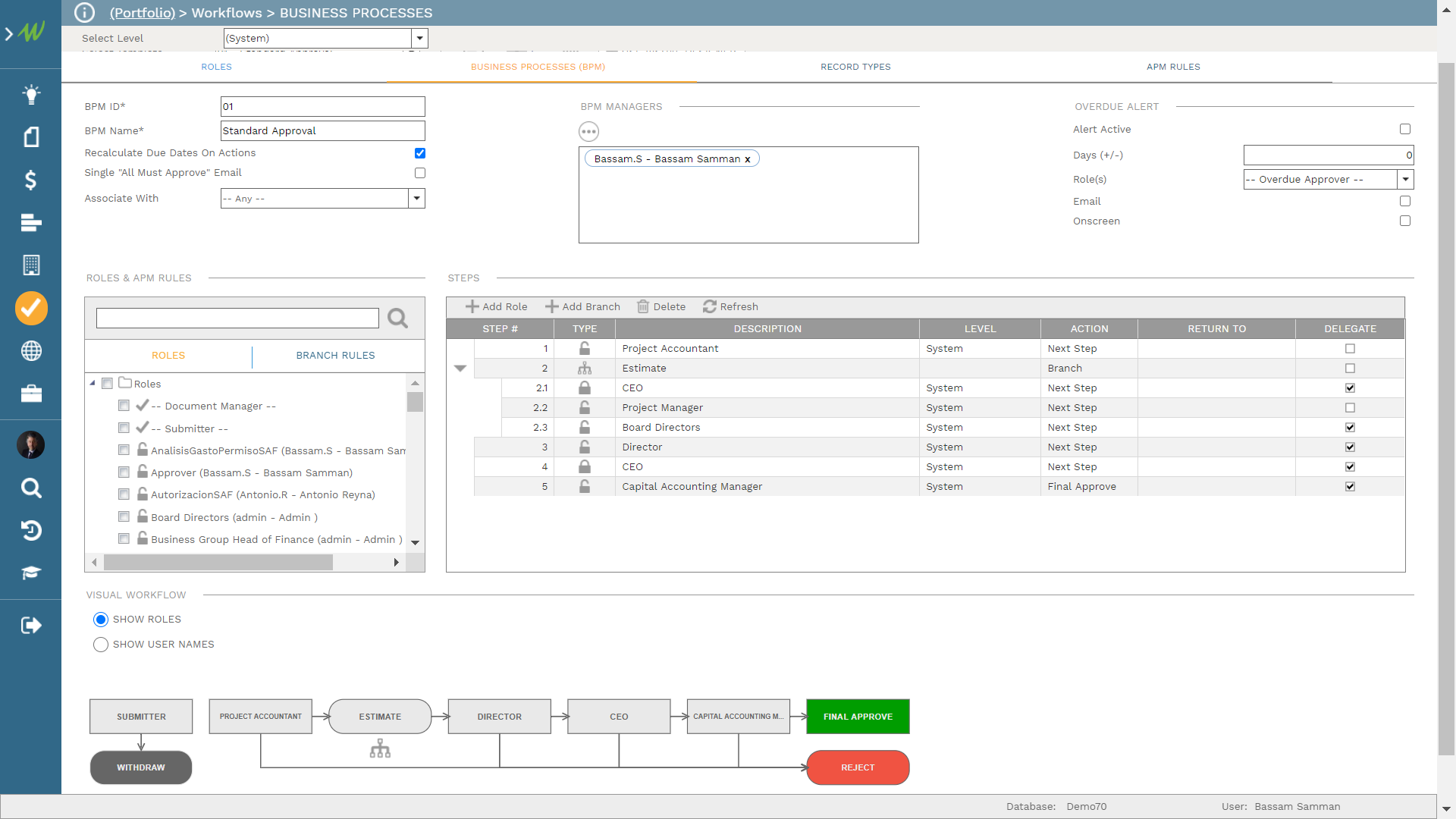 The actual cost that can be posted against a project would be either related to interim payment certificates (IPC) or invoices issued against each awarded contract or other expenses that are not related to a contract. The IPC will be captured using PMWeb progress invoice module while non-commitment expenses would be captured using PMWeb miscellaneous invoices and timesheet modules. The valuation of interim payment certificates can be based on the approved percent complete values for activities that are associated with each bill item. PMWeb scheduling module will be used to import and store the Oracle Primavera or MS Project schedules for each progress period. 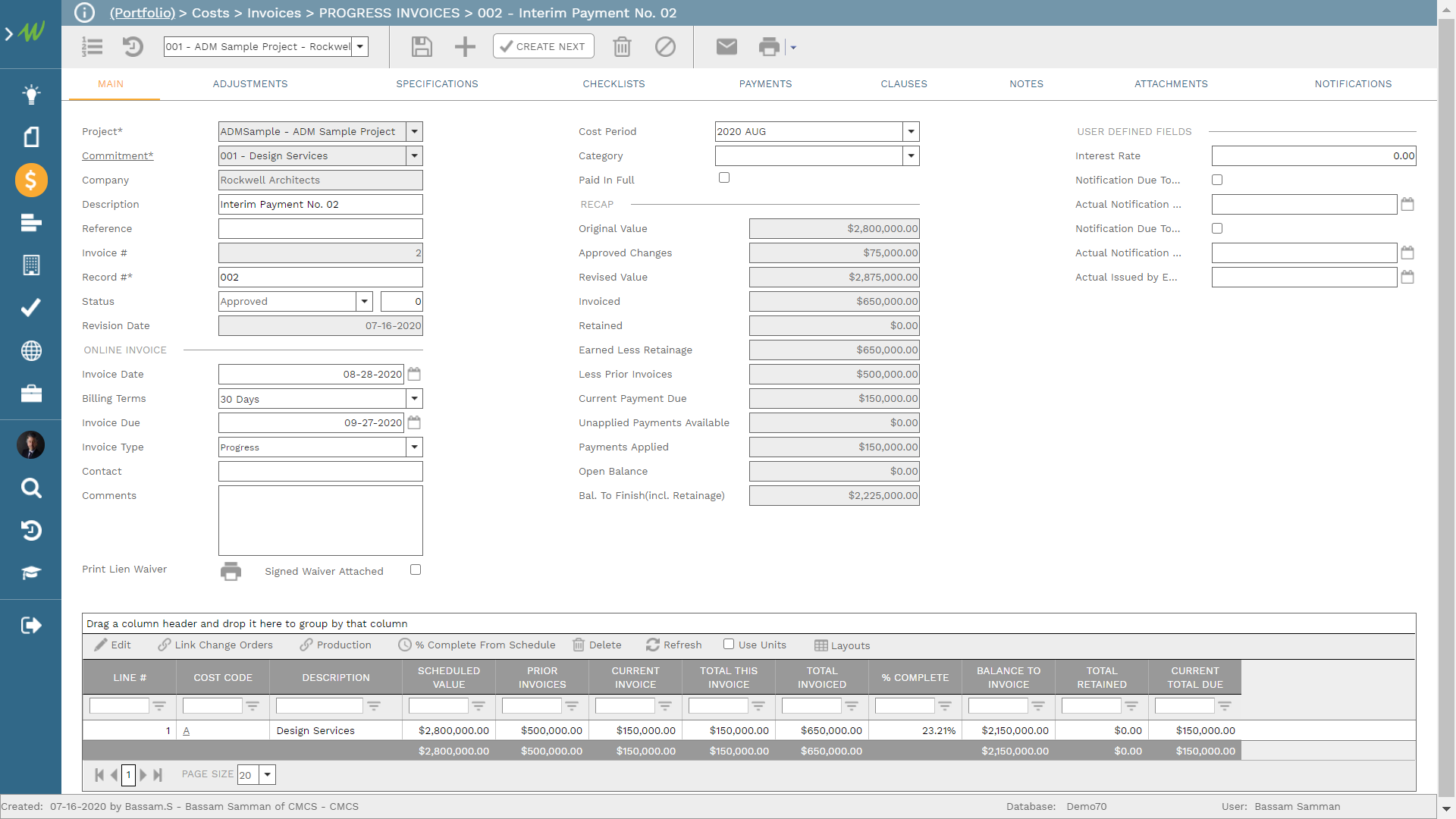 PMWeb miscellaneous invoices module will used to capture the details of actual cost incurred against a project for expenses such as insurance, guarantees, bonds, permitting authorities fees, head office overhead contribution, management expenses among others. This module can be also used to capture expenses posted by other accounting and enterprise resource planning (ERP) applications. 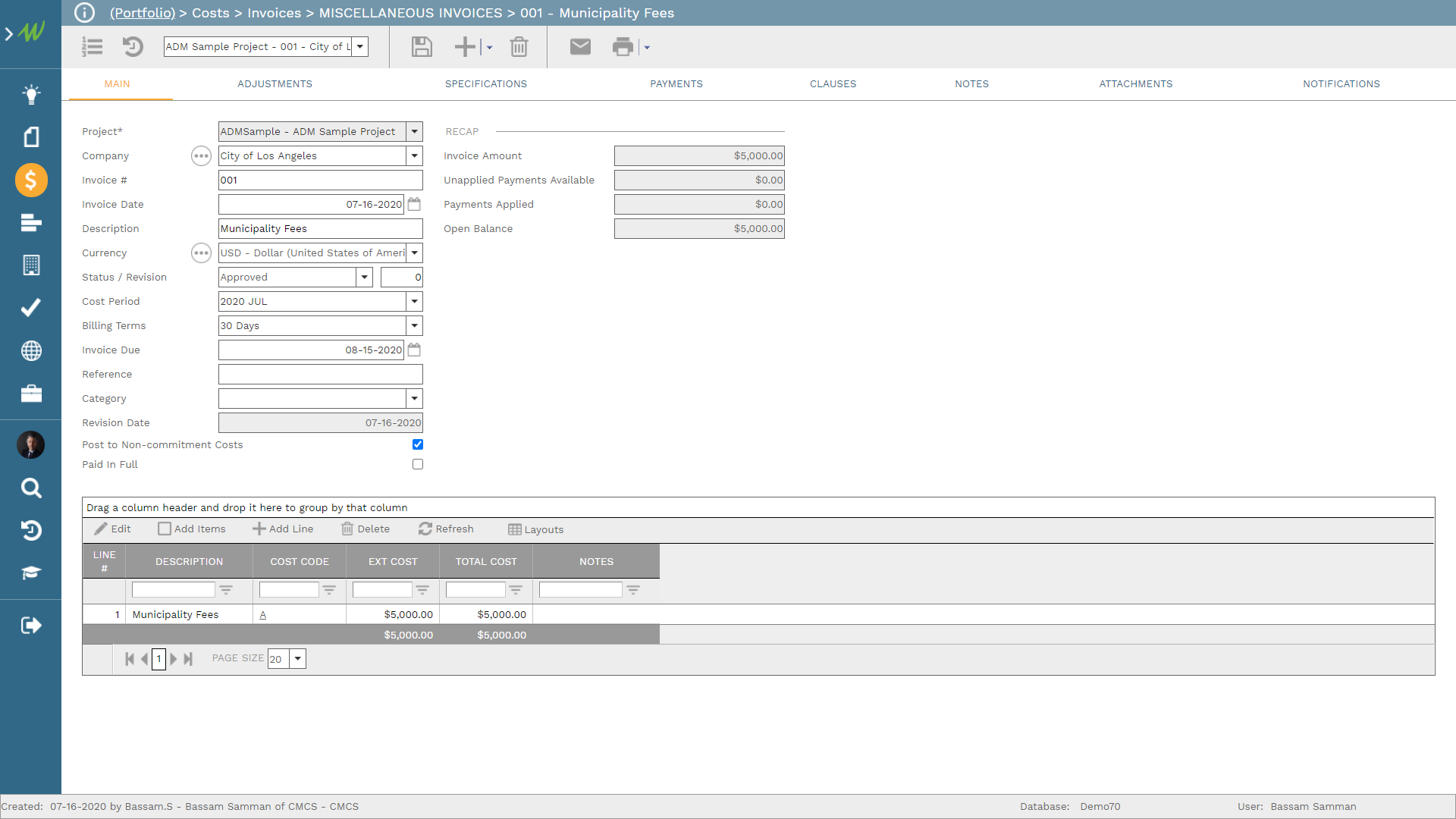 The actual payments made against contracts’ related progress invoices and miscellaneous invoices will be captured at each approved invoice using PMWeb payment tab. The details will include the amount paid, method of payment, date of payment, bank details among other details needed for accounts payable payments.

PMWeb forecast module will be used to calculate and save the earned value measures for each reporting period. Those will be the Planned Value (PV) which will be extracted from the budget module periods projection, Actual Cost (AC) which will be extracted from interim progress invoices module and Earned Value (EV) which will be extracted from the linked Oracle Primavera or MS Project schedules. The EV value will be the percent complete (% Complete) value as reported by the schedule multiplied by the budget value captured in PMWeb budget module. The Schedule Variance (SV) will be EV minus PV values whereas Cost Variance (CV) will be EV minus AC. The Schedule Performance Index (SPI) will be EV divided by PV and Cost Performance Index (CPI) will be EV divided by AC. PMWeb forecast module include 10 user defined fields to allow creating the needed formulas should they are not available by default. The SPI and CPI will be calculated in the commercial dashboard or any related report.

It should be noted that since the majority of capital construction projects, at least in the Middle East and Gulf Corporate Council (GCC) countries, are based on fixed lump sum contracts, great care should be given when analyzing the impact of those EVM measure variances and indices on the estimate at completion (EAC) and variance at completion (VAC) values. 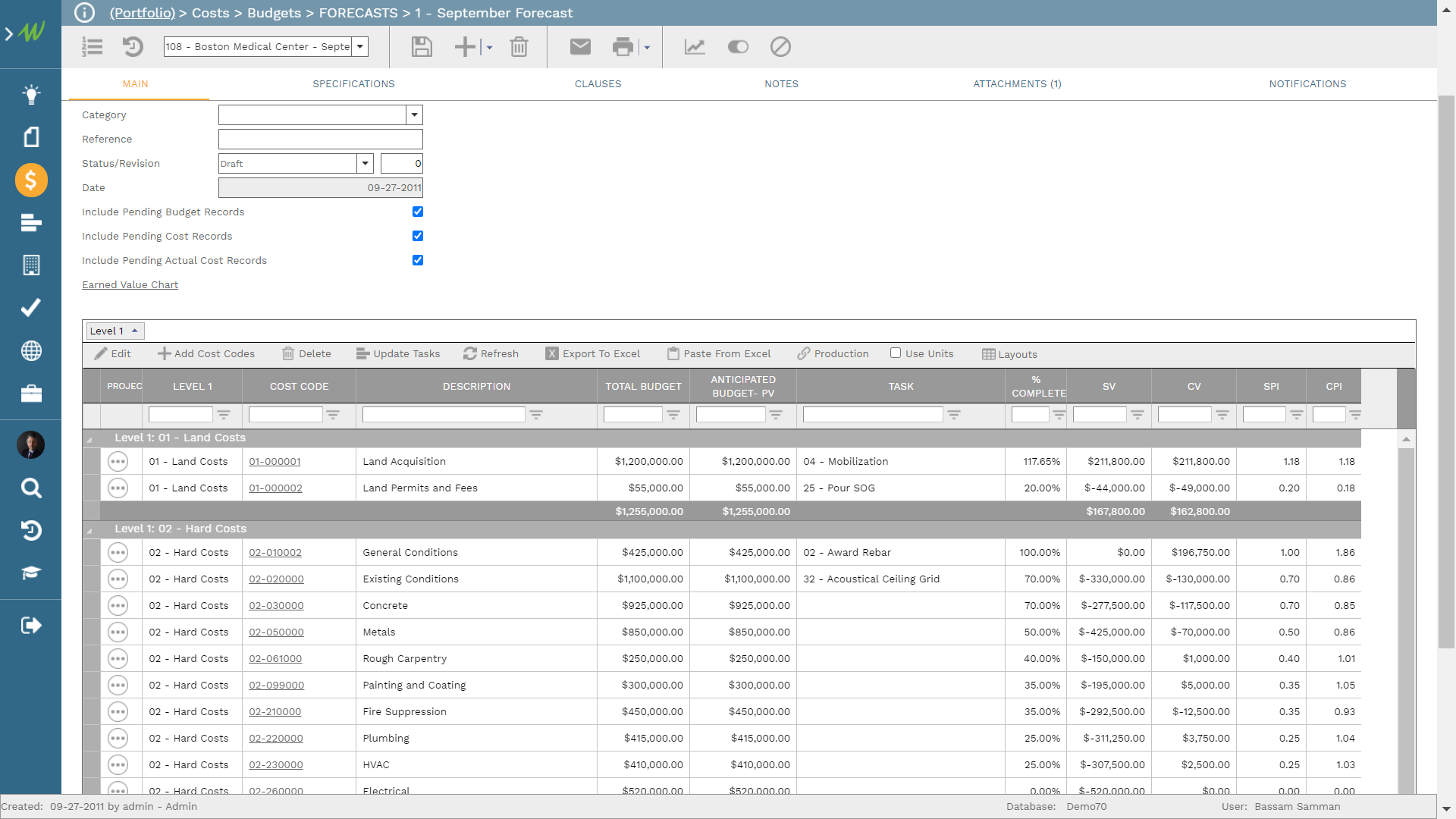 The cost associated with identified risks will be captured in PMWeb risk analysis module. The common practice would be to develop different risk registers which will detail the likelihood and impact of each identified risk. The risk register will include the estimated exposure of each risk before and after implementing the approved risk response actions. Those are known as pre-mitigation and post-mitigation cost exposure. Risk response actions could include risk avoidance, risk mitigation, risk transfer and risk acceptance. PMWeb risk analysis module which will be always subject to be populated with new identified or emerged risks, will be also used to detail closed and active risks. 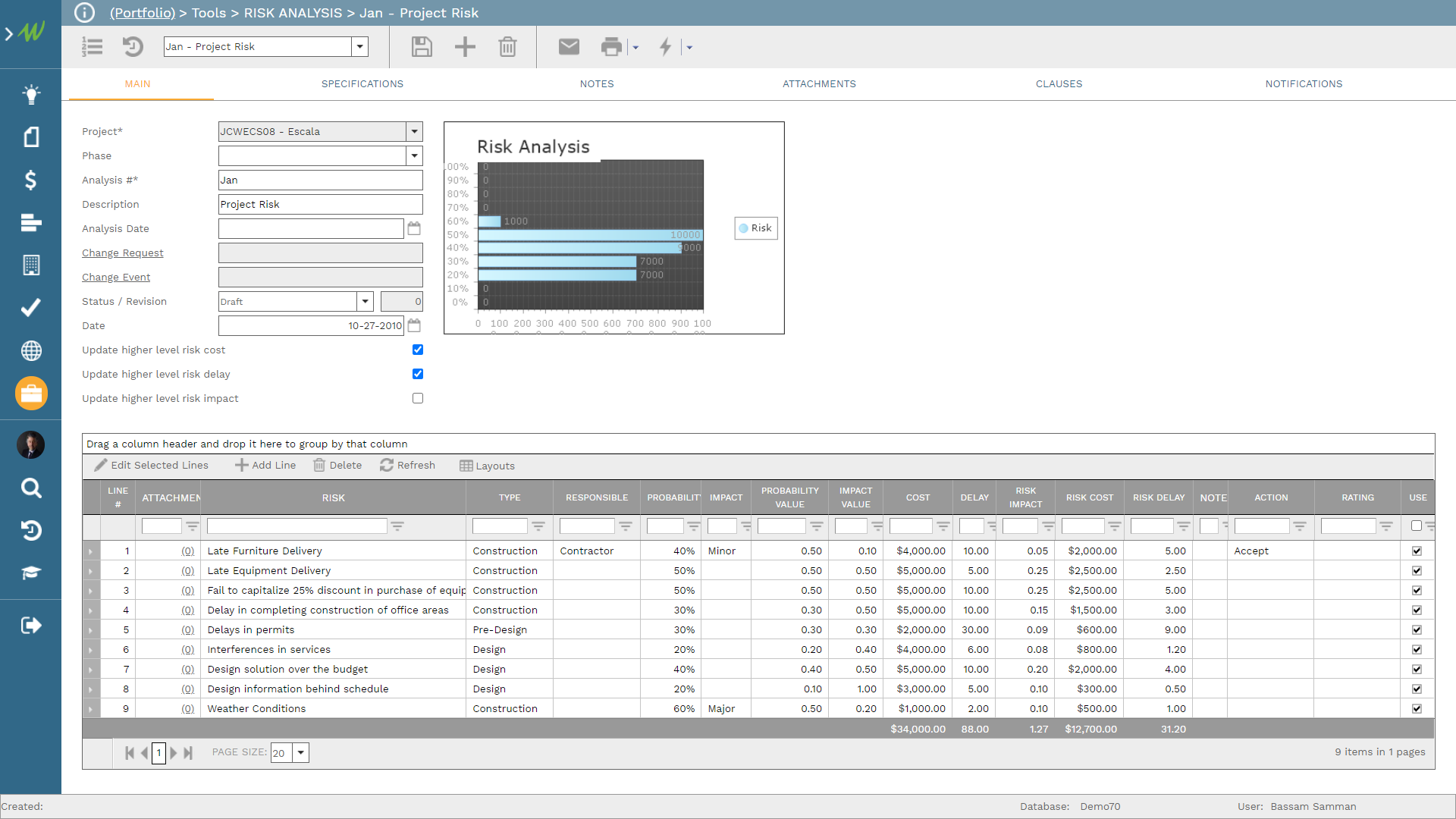 The Single Version of the Truth Commercial Dashboard

The data captured from the above PMWeb modules will become the basis for creating the desired real-time single version of the truth commercial dashboard. For each summarized commercial transaction which is presented in one of the dashboard cards, the dashboard will be configured to allow the dashboard reader to drilldown and have a register of all transactions that have contributed to the reported value. The dashboard reader can click on any listed transaction to have more details including the option the check all attached documents and linked PMWeb records and imported emails. Further, the reader can review the workflow history of that particular transaction with all comments made and actions taken by who and on what date. This type of traceability and auditability will ensure the trust-worthiness of the reported commercial information. 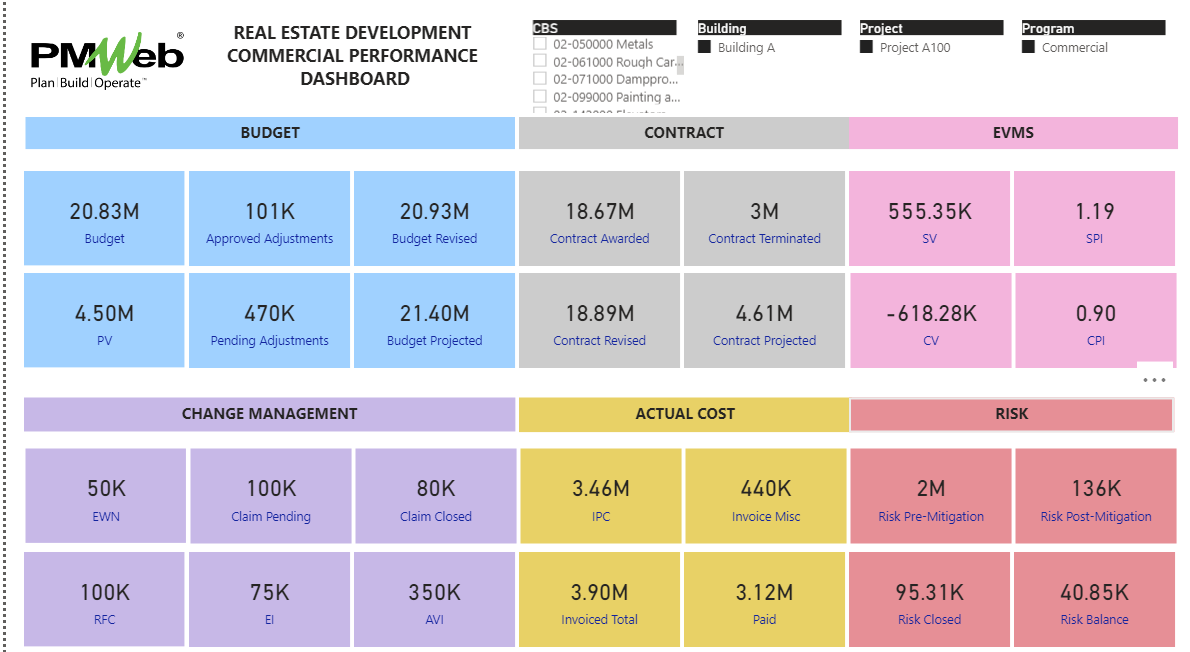