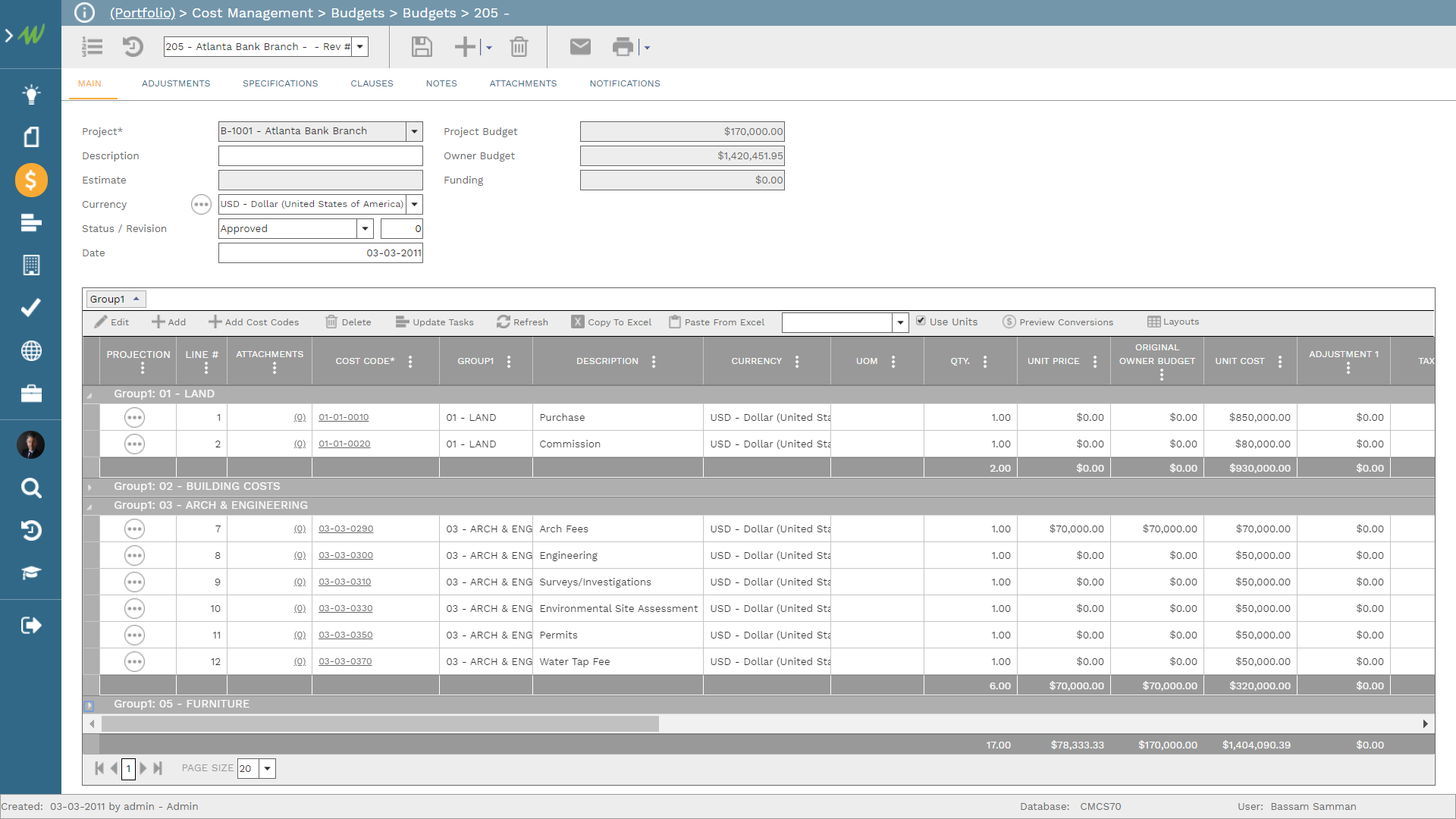 In capital investments, the revenue projects are the projects managed by the sales team to generate the anticipated revenue of the investment. The revenue will be the investment assets that will be offered for sale, lease and management agreements with hotel operators, public sector entities, regional and international corporations such as banks, logistics and warehousing, supermarkets, movie-theater operators, retailers among others. As detailed in Article #243, revenue projects as well as the engineering and construction projects, also known as execution projects, needed to produce the investment assets will be part of a single program which is the overall investment.

Although it is very common to apply the earned value method for the engineering and construction projects, nevertheless, apply the earned value method on the revenue projects will provide investors with an objective solution to monitor, evaluate, report and forecast the performance of investment revenue earning. This will be achieved by comparing the planned earnings (PV) which will be extracted from the approved budget baseline and earned value (EV) of earned revenue which will be the percent complete from the revenue contract or contracts multiplied by the baseline budget. The variance between those two measures will be the schedule variance (SV) showing if earnings are achieved when they were planned to happen. This performance indicator has direct impact on the investor cashflow. The difference between the actual revenue (AC) received from each revenue contract and the earned revenue (EV) measures will be the cost variance (CV) showing of actual earning amount for completed assets are inline to planned earning amount for the same assets. This performance indicator has direct impact on the investor profitability.

Using a Project Management Information System (PMIS) like PMWeb, the anticipated target revenue for the assets to be leased or sold will be captured in PMWeb budget module. The budget for the revenue project will be unit based where the budget line items will detail the components of the assets to be leased or sold. Those items will be measured in terms of areas, units among others were the revenue for each unit will be captured, for example US$ per Square Meter or Foot, Hotel Rooms among others. This will be the Budget at Completion (BAC). 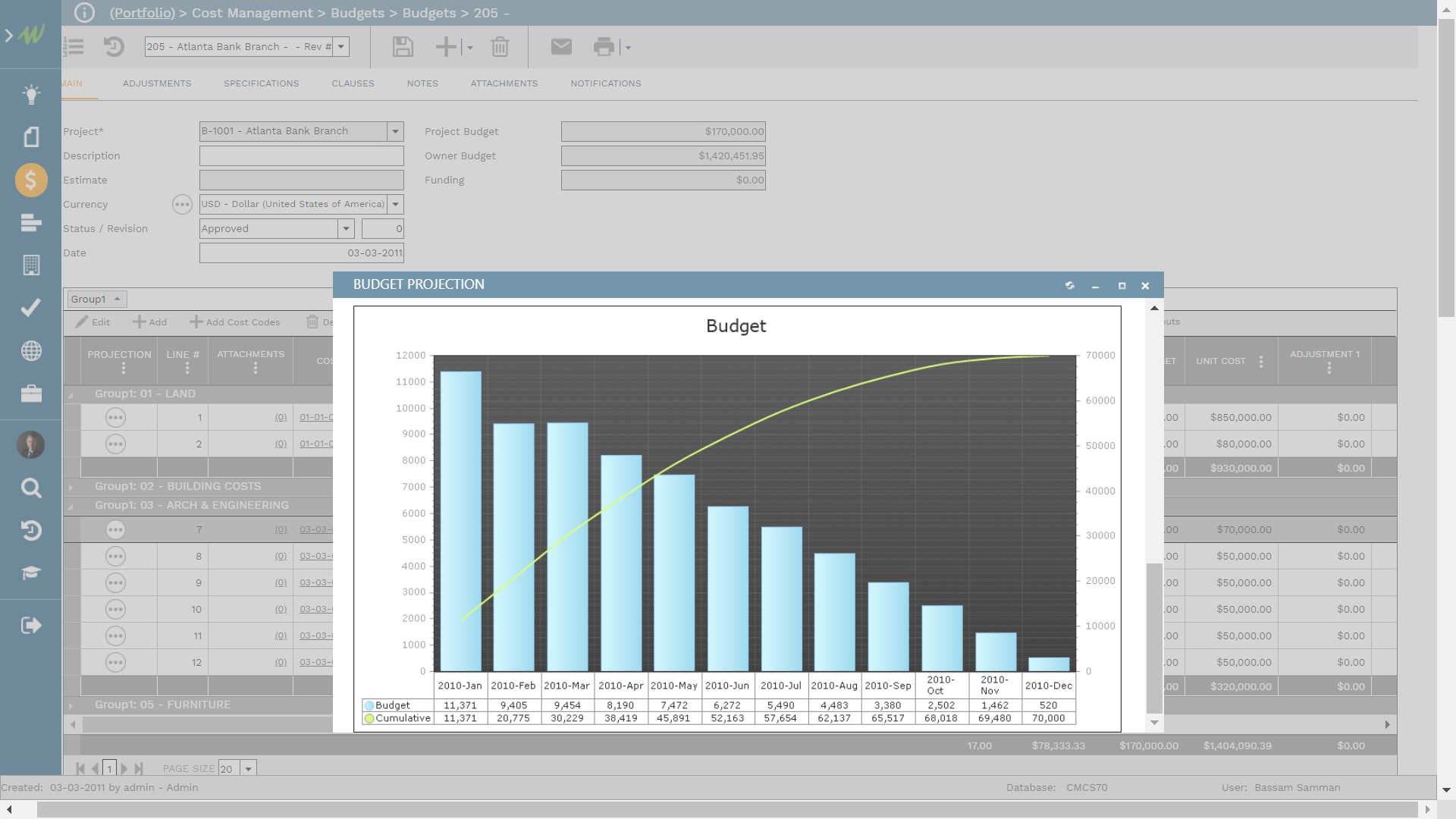 For the signed revenue contracts for each project, PMWeb contract module will be used to capture the details of those contracts. The option for unit rate contracts will be selected to provide the quantity and unit price of all leased and sold assets. The revenue agreement should associate the revenue components with the same cost accounts levels used in creating the revenue budget. This is essential to compare the actual signed revenue agreements with the approved revenue budget baseline. It is very common that the revenue source for a specific cost account could be contributed by different sales or lease contracts. For example, the retail leased space could be the result of agreements between the investor and different retailers, and so on. 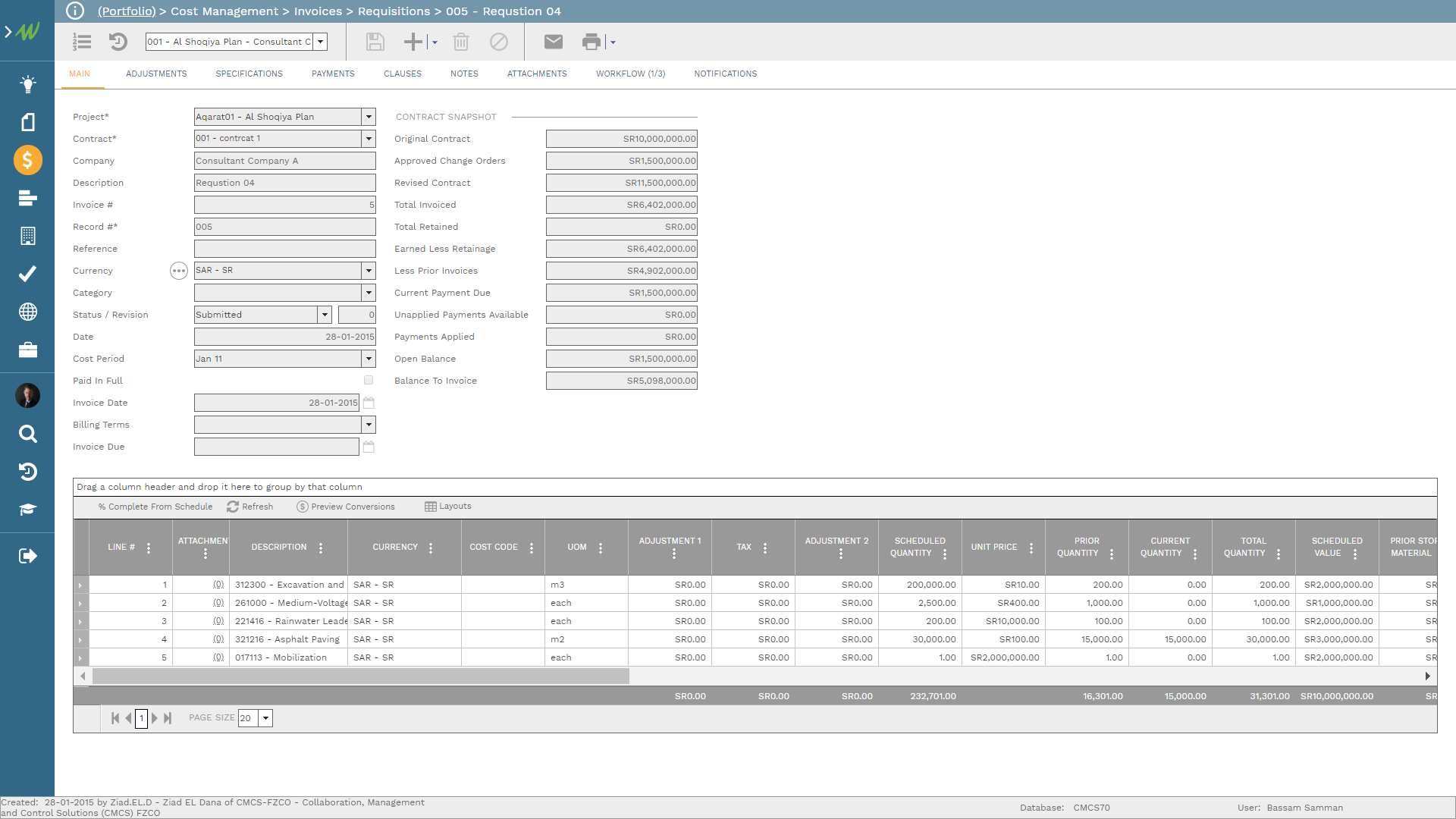 The actual income earned on the revenue contracts will be captured using PMWeb requisition module. Those requisitions will be issued on the dates agreed to make those payments which are part of each sale or lease agreement. This will be the Actual Cost (AC). 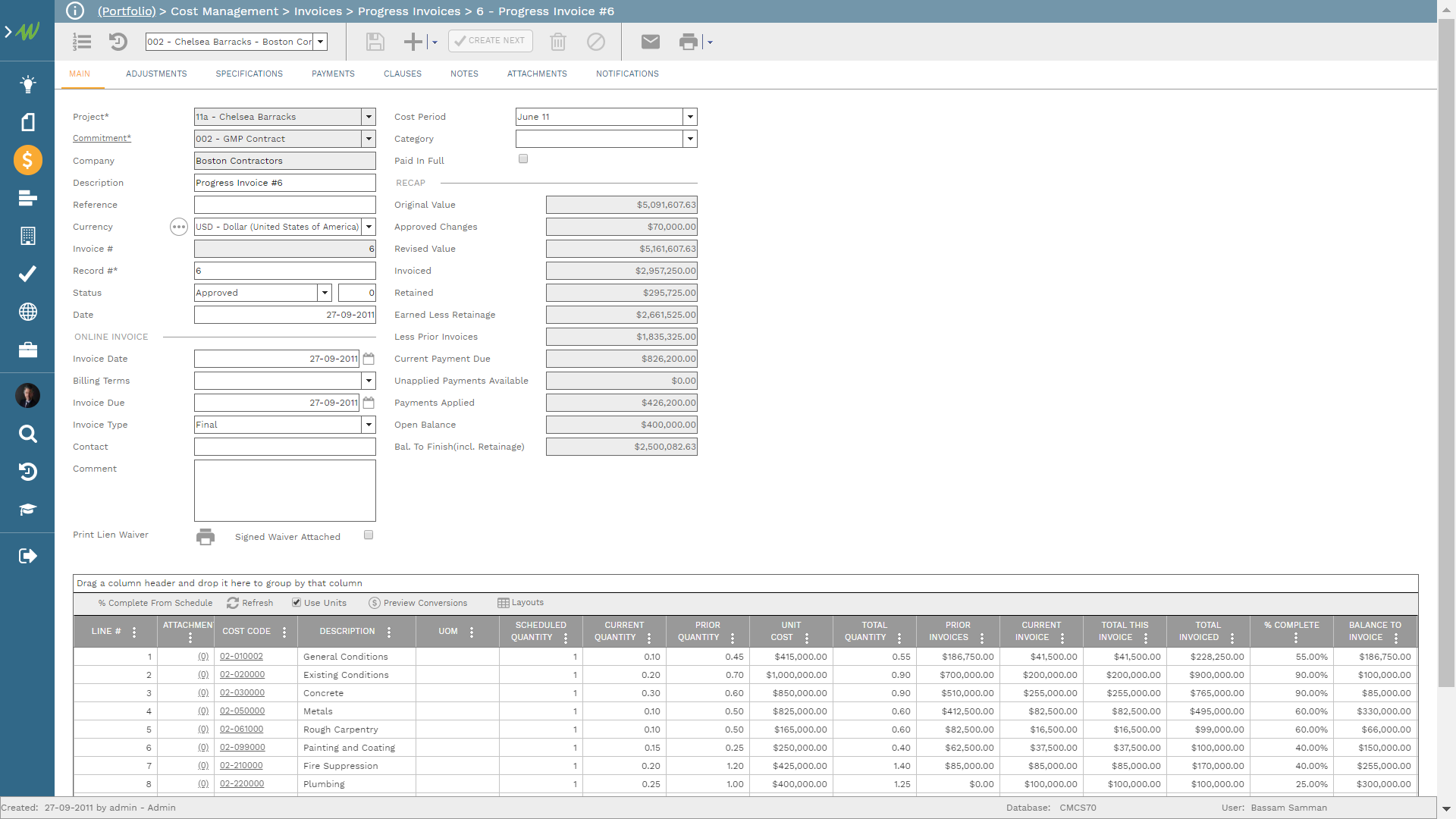 The data captured in the above PMWeb modules will become the basis for the Earned Value Performance report for the revenue projects. The report will include a tabular report to show the performance at the end of each elapsed period for each cost account. The information will include the budgeted revenue at completion (BAC), planned revenue earning value (PV), earned value of actual revenue (EV), actual revenue (AC), schedule variance (SV), cost variance (CV), schedule performance index (SPI), cost performance index (CPI), estimate to complete (ETC), estimate at completion revenue (ETC) and variance at completion for revenue earned (VAC). The report will also include histogram visual for schedule and cost variance amounts for elapsed periods and a line visual for the trends for the schedule and cost performance indices for the elapsed periods. 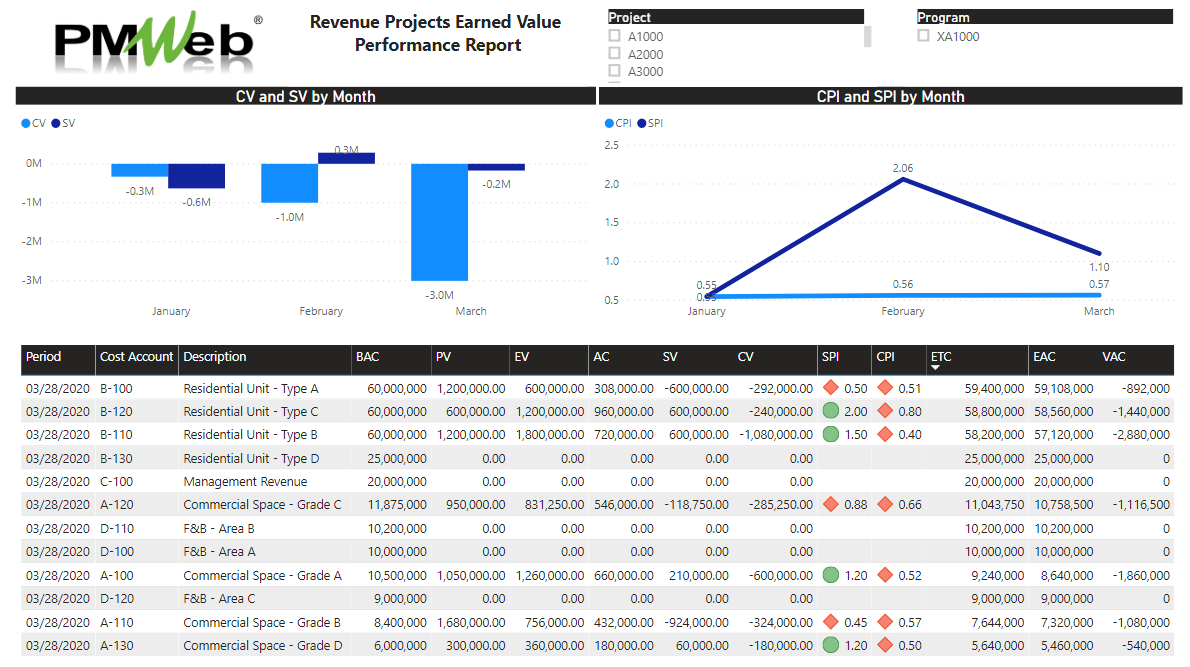