Article #219 Using the Potential Changes Process to Ensure a Real-Time Analysis, Monitoring, Evaluation and Reporting of the Causes that Could Lead to Cost Overrun in Capital Projects Delivery

One of the key challenges that face capital project owners is how to control the causes that could lead to encountering cost overrun when it comes to delivering their capital projects’ investments. Project owners need to have a single version of the truth of all events that could cause cost overrun on their projects regardless of the additional cost was incurred has led to in-scope or out-of-scope change orders, claims among others. Project owners need to have an early warning notification of those events to enable them to mitigate or avoid their cost impact.

To enable those capital project owners to better manage, monitor, control, and report on all events that could lead to cost overrun, it is recommended to introduce a formal process to manage those events. This process which is known as “Potential Changes” enables the project team members to adopt a proactive process to capture the details of all cost implications that are associated with events that could cause incurring additional costs on the project. The “Potential Changes” process is a predecessor to the “Change Order” process for which the change order process can only commence after completing the potential change order review and approval process where it will be determined whether a change order is required or not.

Using a Project Management Information System (PMIS) like PMWeb, the processes for potential changes and change orders are two of the ready-to-use cost management processes that are available by default in PMWeb. In addition to those two processes, there is also the need to implement other ready-to-use PMWeb cost management processes, including the budget, budget requests, commitments, progress invoices, and miscellaneous invoices.

The chart below shows how the “Potential Changes” fits in the overall process to monitor, evaluate and report project cost overrun. The cost overrun will be determined by the value of the Variance at Completion (VAC) where a negative value indicates cost overrun. The VAC is calculated at each cost breakdown structure (CBS) level as well as the project overall. The VAC is the difference between the current approved project’s budget at completion (BAC) and the current estimated cost at completion (EAC). The EAC is the sum of actual cost incurred to date against all awarded contracts, balance to be invoiced on all awarded contracts, the non-contract actual cost incurred to date, and the sum of all potential changes that are still not approved as change orders to all awarded contracts.

The analysis above is based on lump-sum contracts, the most common contract procurement method in the Middle East and North Africa (MENA) region. This means if the “Potential Orders” amount was excluded, the current Budget at Completion, excluding the balance of project contingency and management reserve, and the current Estimate at Completion should always have the same value.

To start with, it is important to have an approved project baseline budget for which it will be aligned with the values of the awarded contracts as well as the values of those yet to be awarded. Those contracts are what the project owner will use to outsource the project’s scope of work to contractors, consultants, suppliers among others. The project budget will also include cost centers to capture the scope of work that is not covered by the outsourced contracts such as the scope of work and services that will be performed by the project owner. The budget will also include cost centers for project contingency and management reserve. PMWeb default budget module will be used to capture the baseline budget. 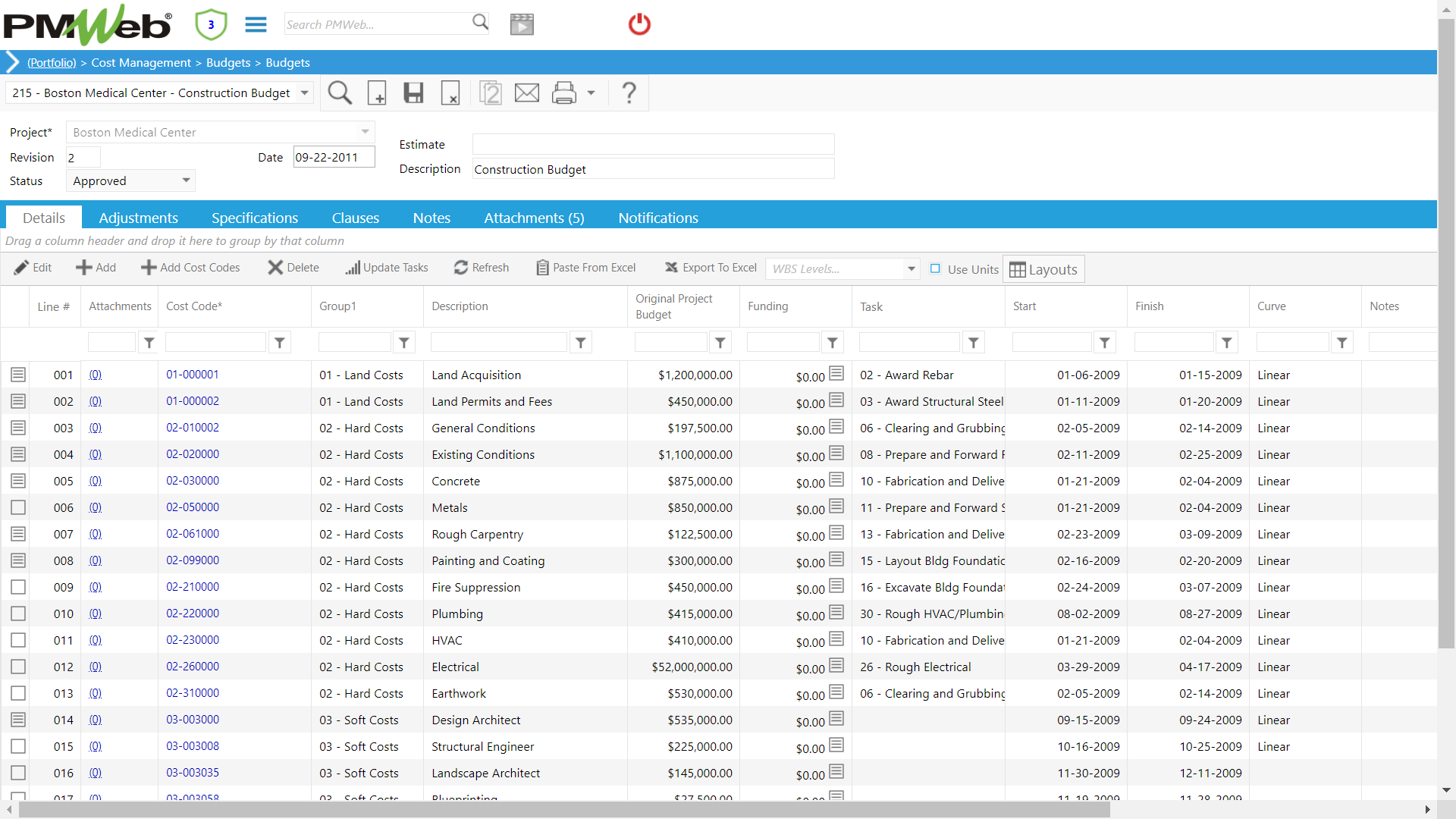 In addition, the PMWeb commitment module will be used the capture the details of all awarded contracts to contractors, consultants, suppliers among others. Further, commitments can be used to capture all internal contracts that might exist between the project entity and other business units of the project owner. The baseline budget, commitments, and all other cost management processes will have a common cost breakdown structure (CBS) to ensure the proper alignment of all reported cost data. 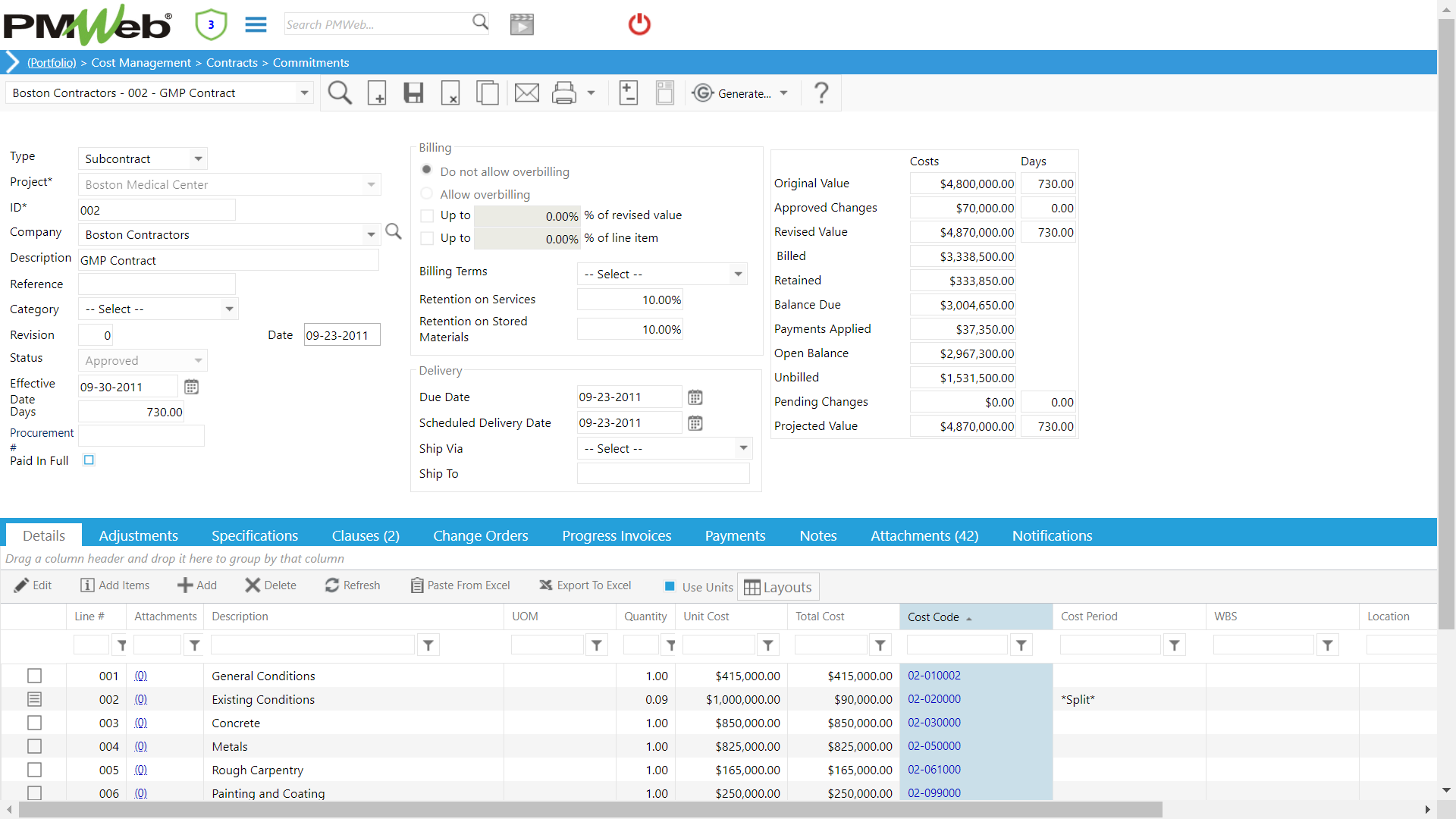 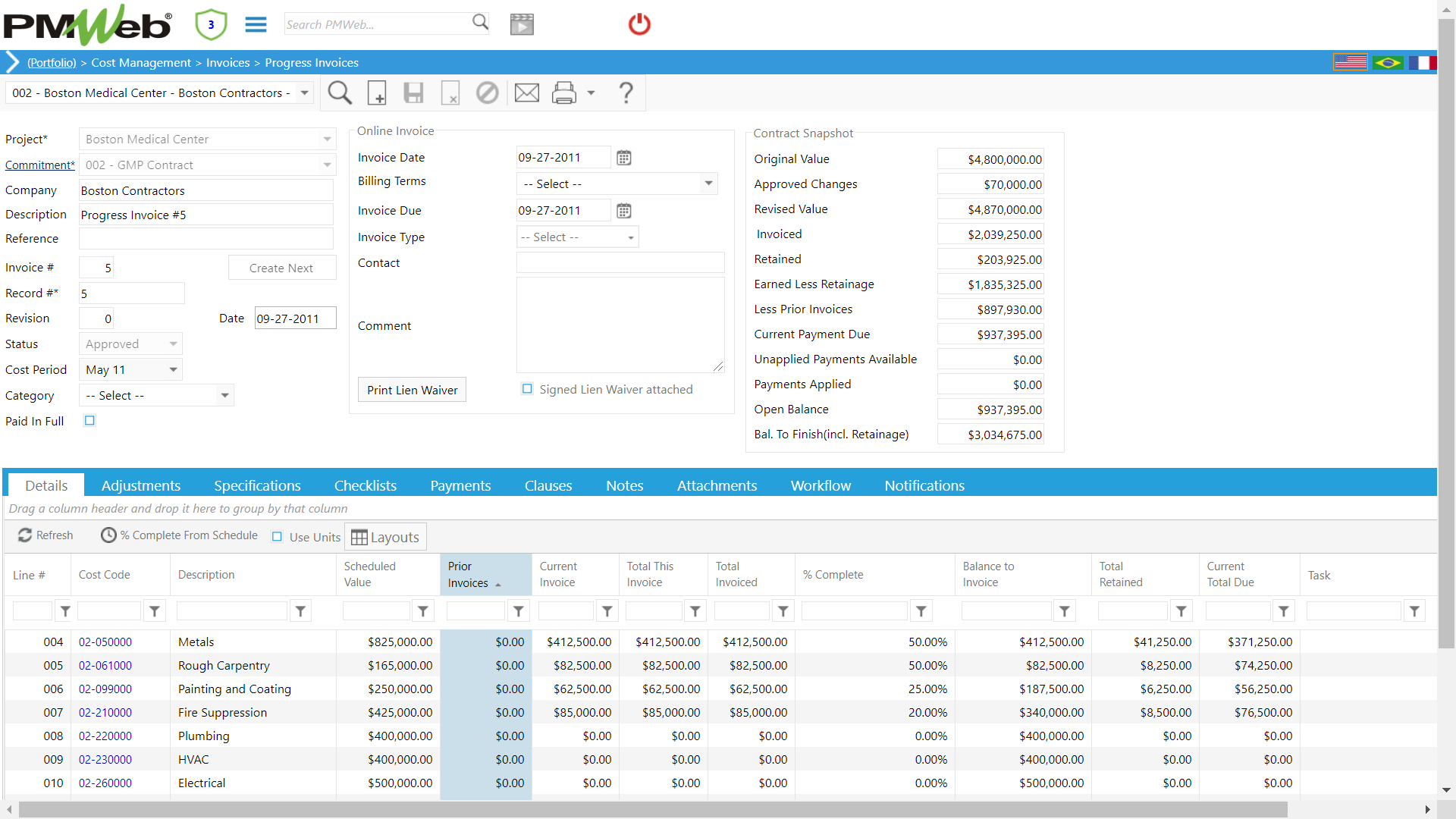 For actual costs that are not associated with one of the awarded or to be awarded commitment contracts, PMWeb allows capturing those charges using the Miscellaneous Invoices module. This will enable the project owner to capture all actual costs regardless of their source. 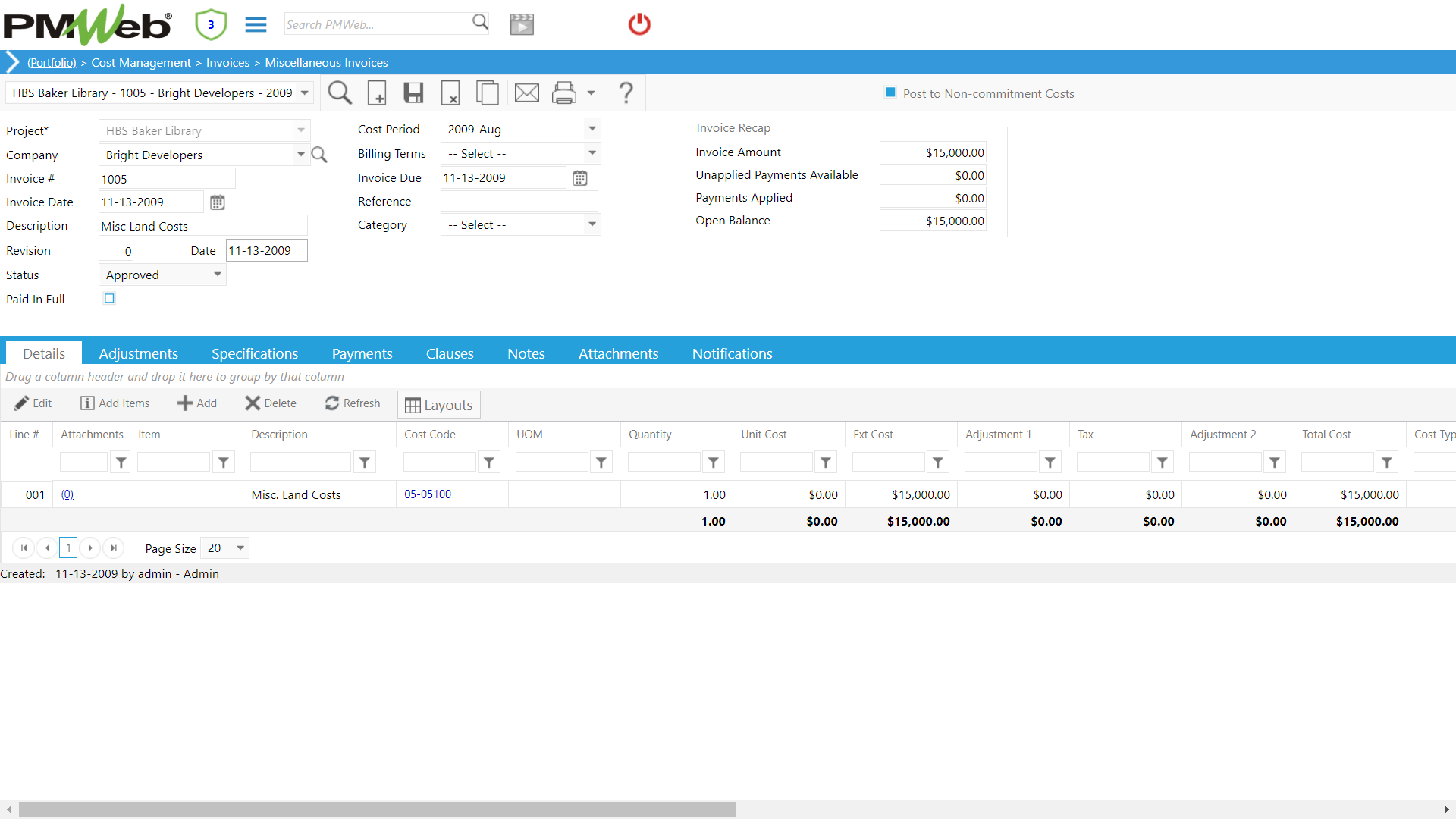 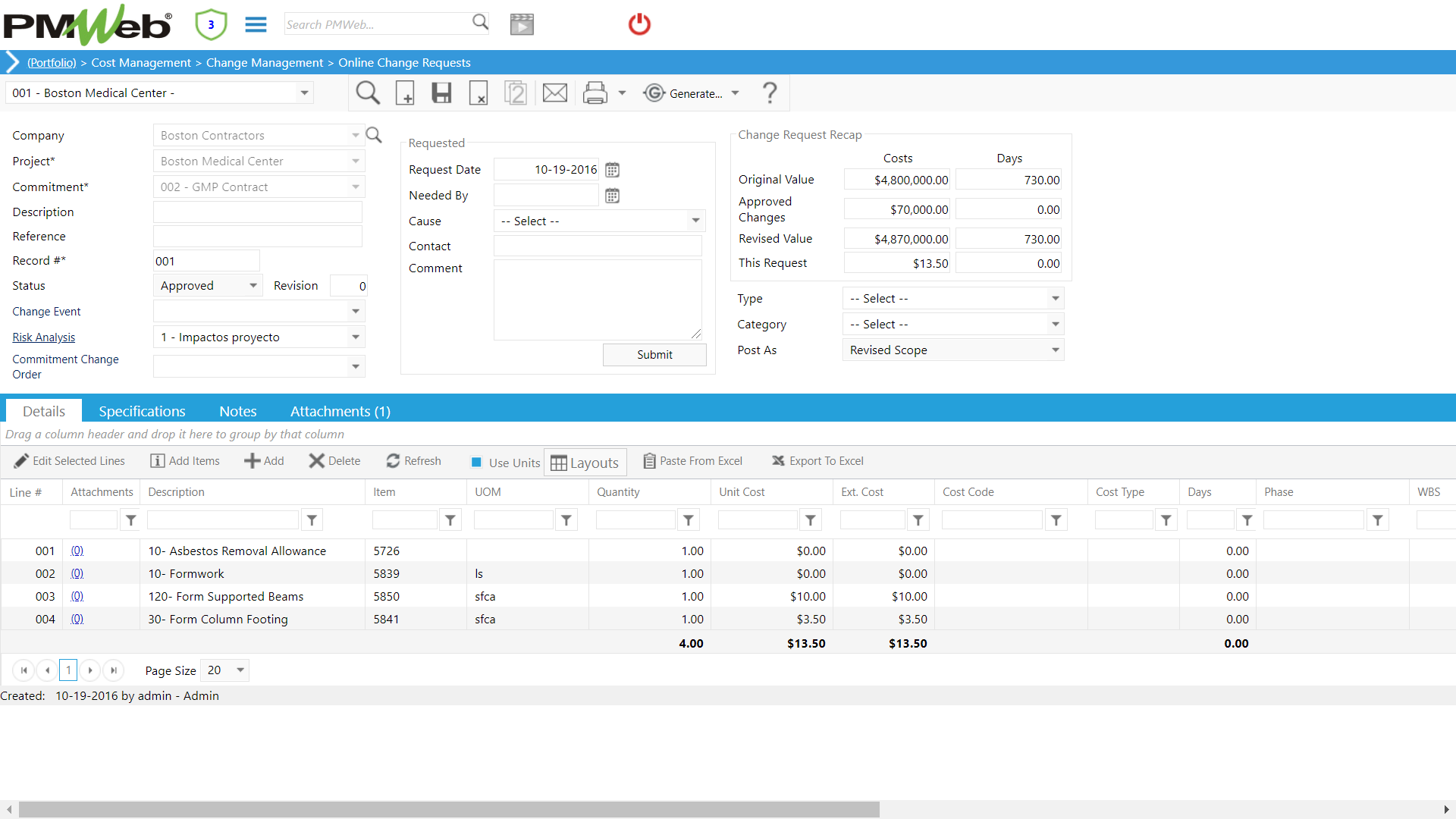 The potential change order form will have a field to identify the cause that has resulted in reporting it. Those cases could be attributed to technical, economical, contractual, Psychological, and political reasons. The article titled “Model of Predicting Cost Overrun in Construction Projects” published on November 23, 2018, by Edyta Plebankiewicz, Institute of Construction Management Cracow University of Technology, Warszawska 24, 31-155 Kraków, Poland, has detailed a comprehensive list of those causes that can be added to PMWeb predefined list of causes to select from. This will provide the project owner will a real-time register of all potential change orders, their causes, status, and other important details.

For approved Potential Changes, a PMWeb Change Order will be generated from the potential changes module to ensure that there is a link between the two processes. All changes to the awarded contract agreements will be captured using the change order module which will include the details of the increase or decrease to the contract amount. Those change orders will be generated from the “Potential Change Order” module which is also detailed in this article. The change order module will include a field to capture the time impact of the approved change order. Adding the approved change orders to the original amount of the awarded contract will provide the revised contract value or current contract amount at completion. 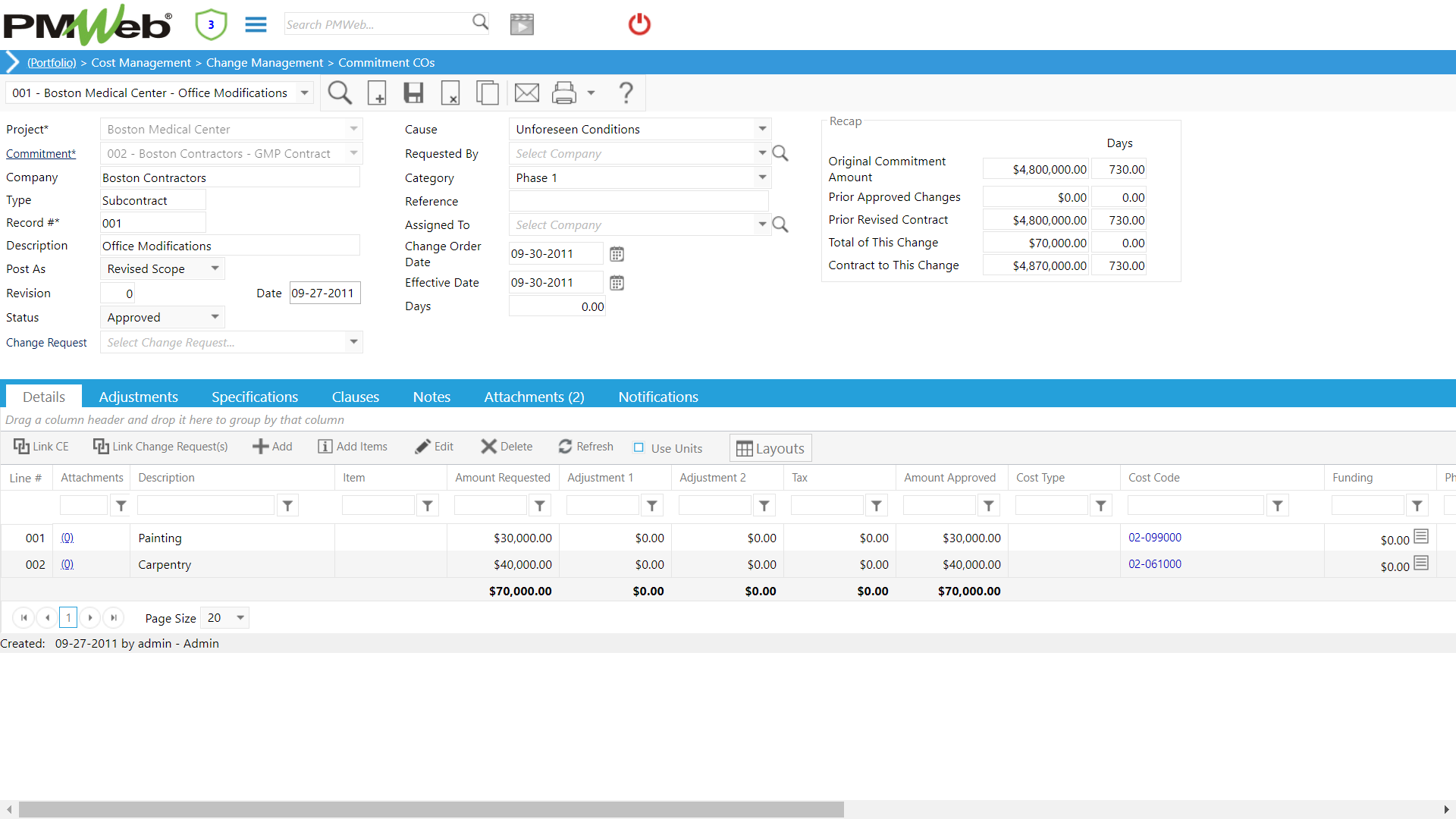 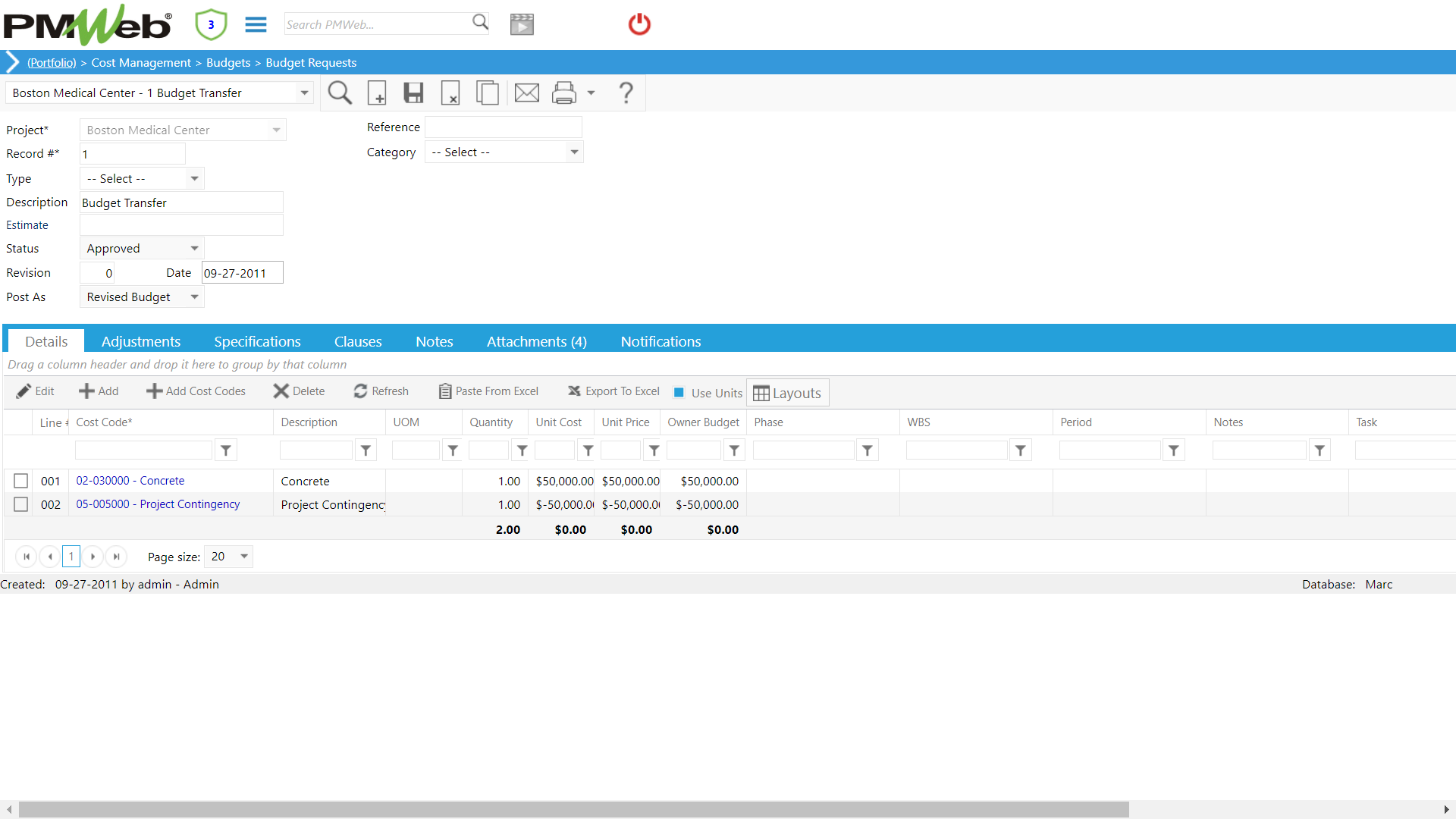 Of course, for every process explained above, PMWeb allows uploading, storing, and attaching all supportive documents to each transaction for each process in their designated folder or subfolder. Those documents could include drawings, specifications, pictures, videos among others. In addition, links to other PMWeb records and imported MS Outlook emails can be added to each transaction. Further, links to websites that could be relevant to the cost management process can be also added. 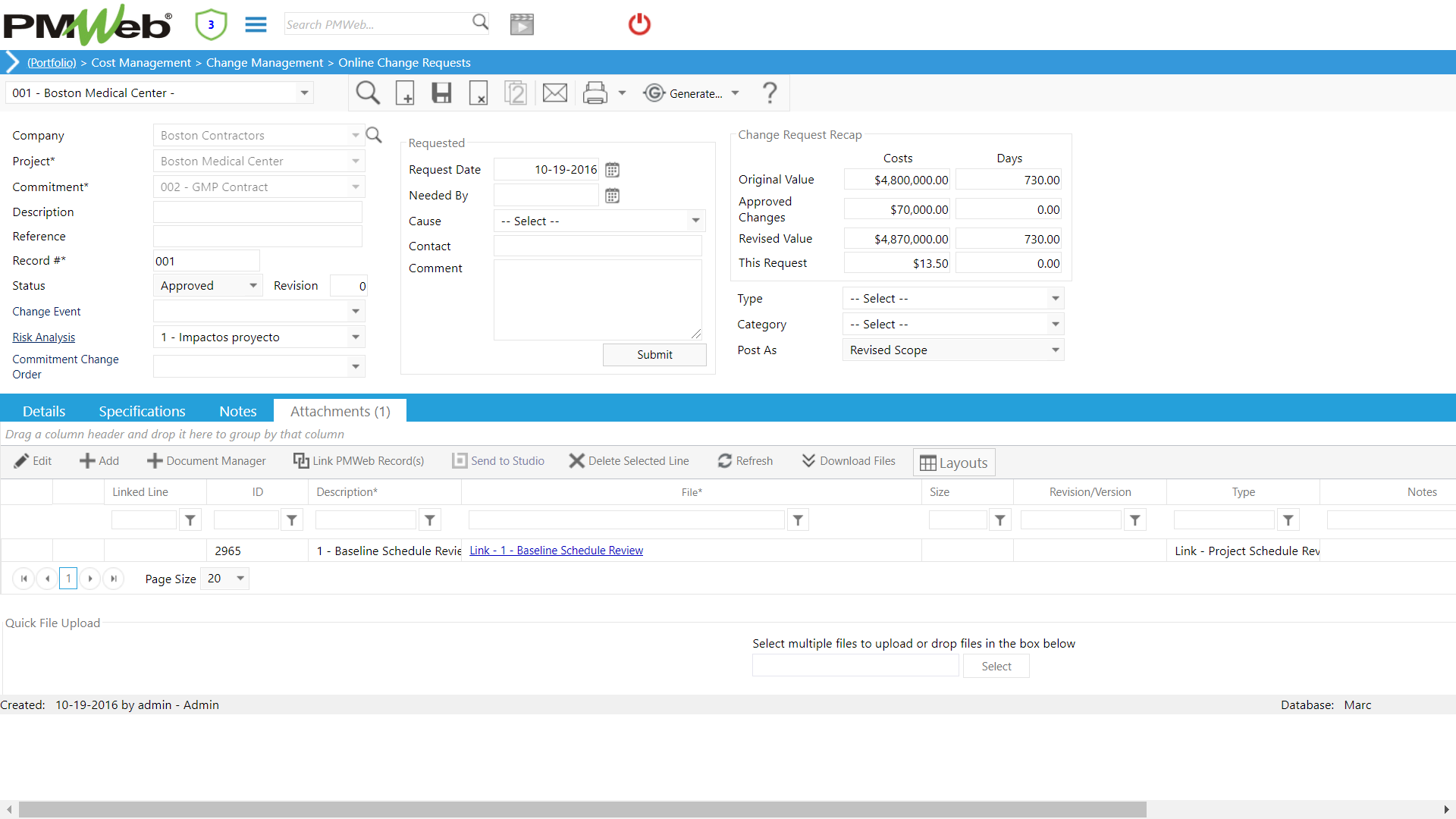 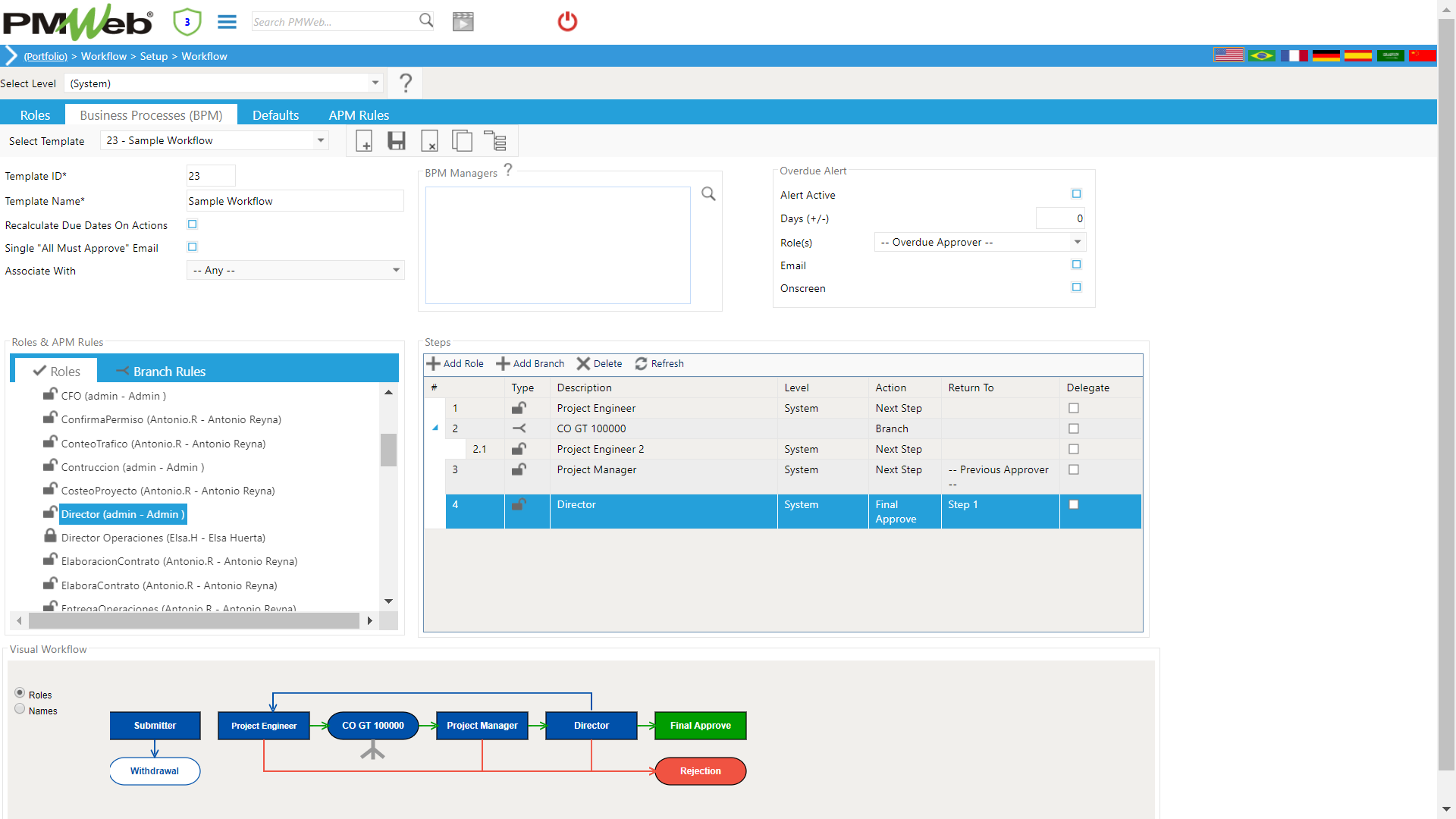 In addition, PMWeb comes ready with the output forms for all cost management processes detailed above such as budget, budget requests, commitments, change orders, progress invoices, miscellaneous invoices among others. Further, all those output forms can be fully customized to incorporate the project owner’s branding and format layout requirements. 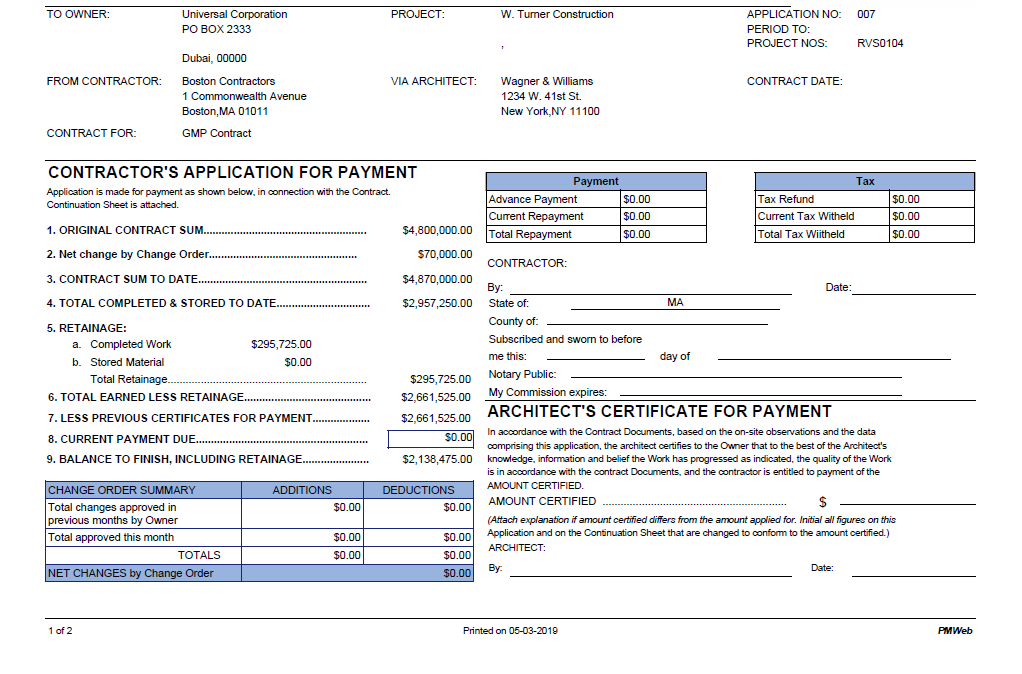 Similarly, PMWeb comes ready with the output reports for the above cost management processes. Those reports include tabular and graphical reports. In addition, all those default output reports can be fully customized to incorporate the project owner’s branding and format layout requirements. 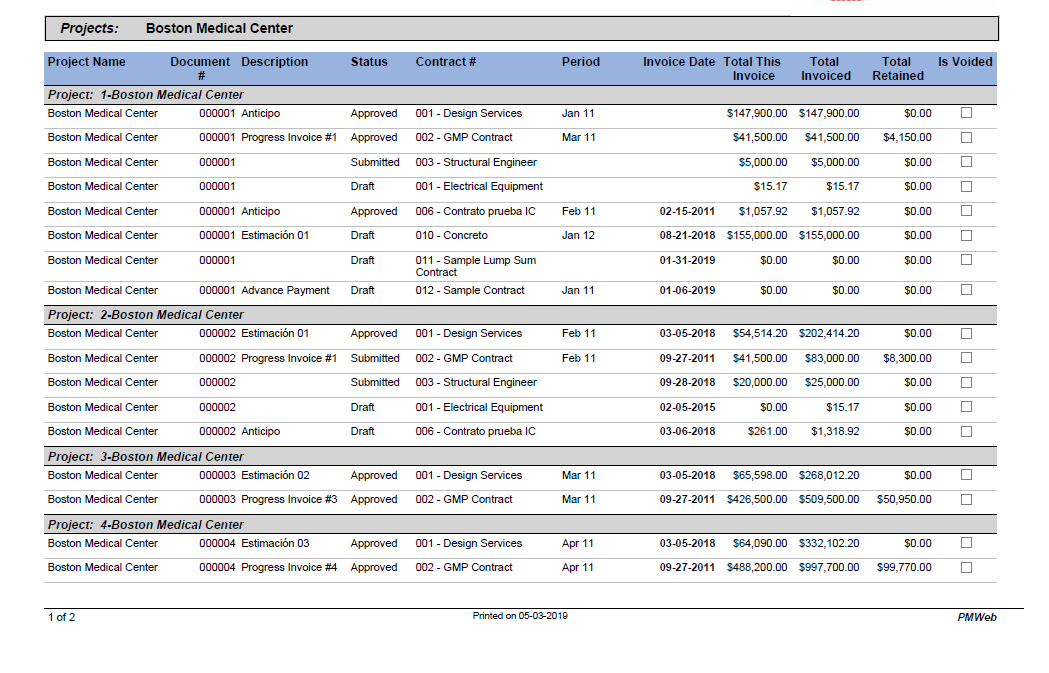 The cost details of all transactions associated with the budget, budget requests, commitments, change orders, progress invoices and potential change orders will be automatically captured in the PMWeb cost ledger module. This will enable presenting the values of those transactions using the PMWeb cost worksheet module. Unlike other PMIS applications, PMWeb allows defining an unlimited number of cost worksheets using the PMWeb Define Worksheet module. The cost worksheet could include all fields captured by the cost ledger as well as alias fields that can be calculated from the cost fields captured in the cost ledger. 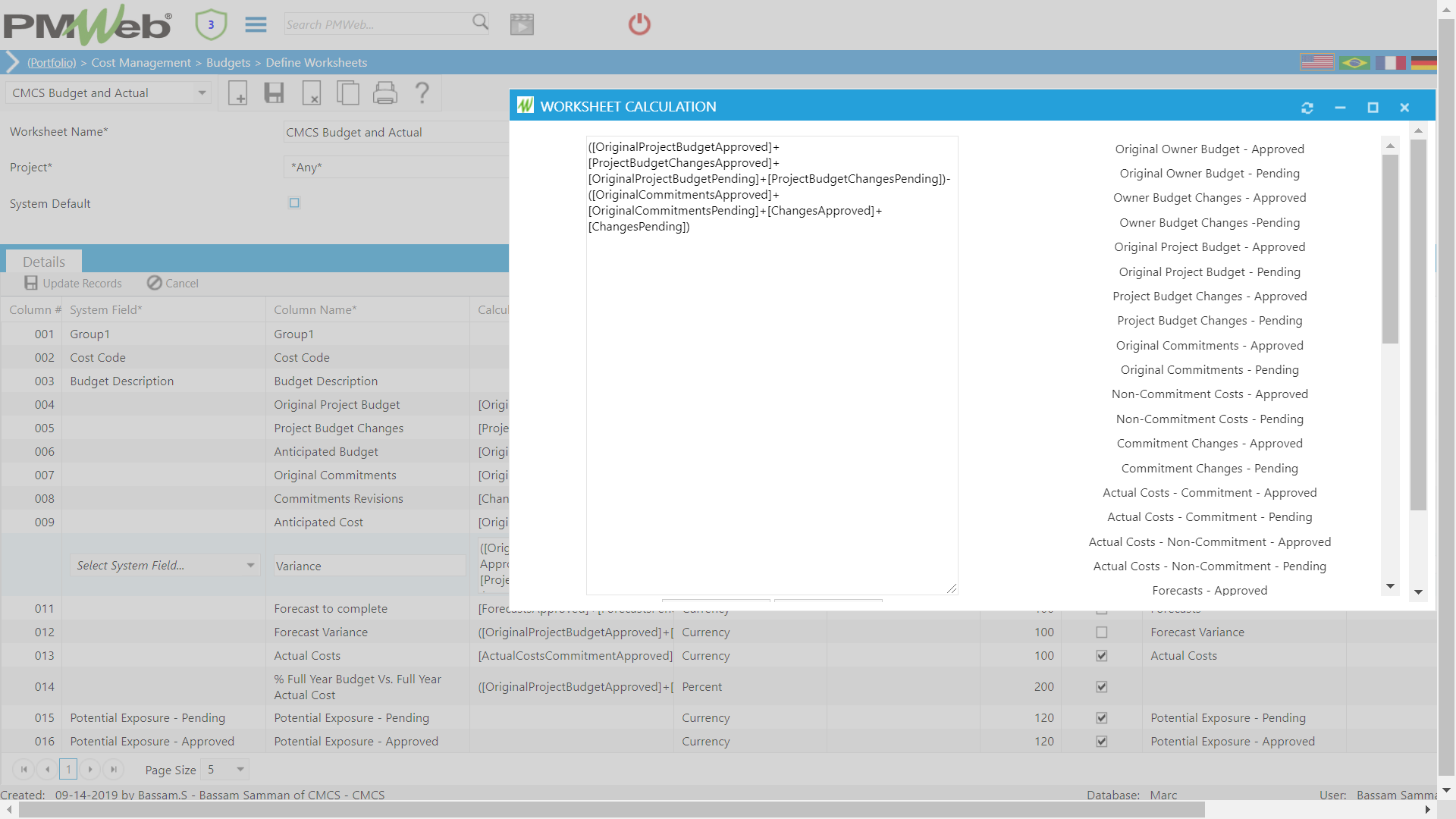 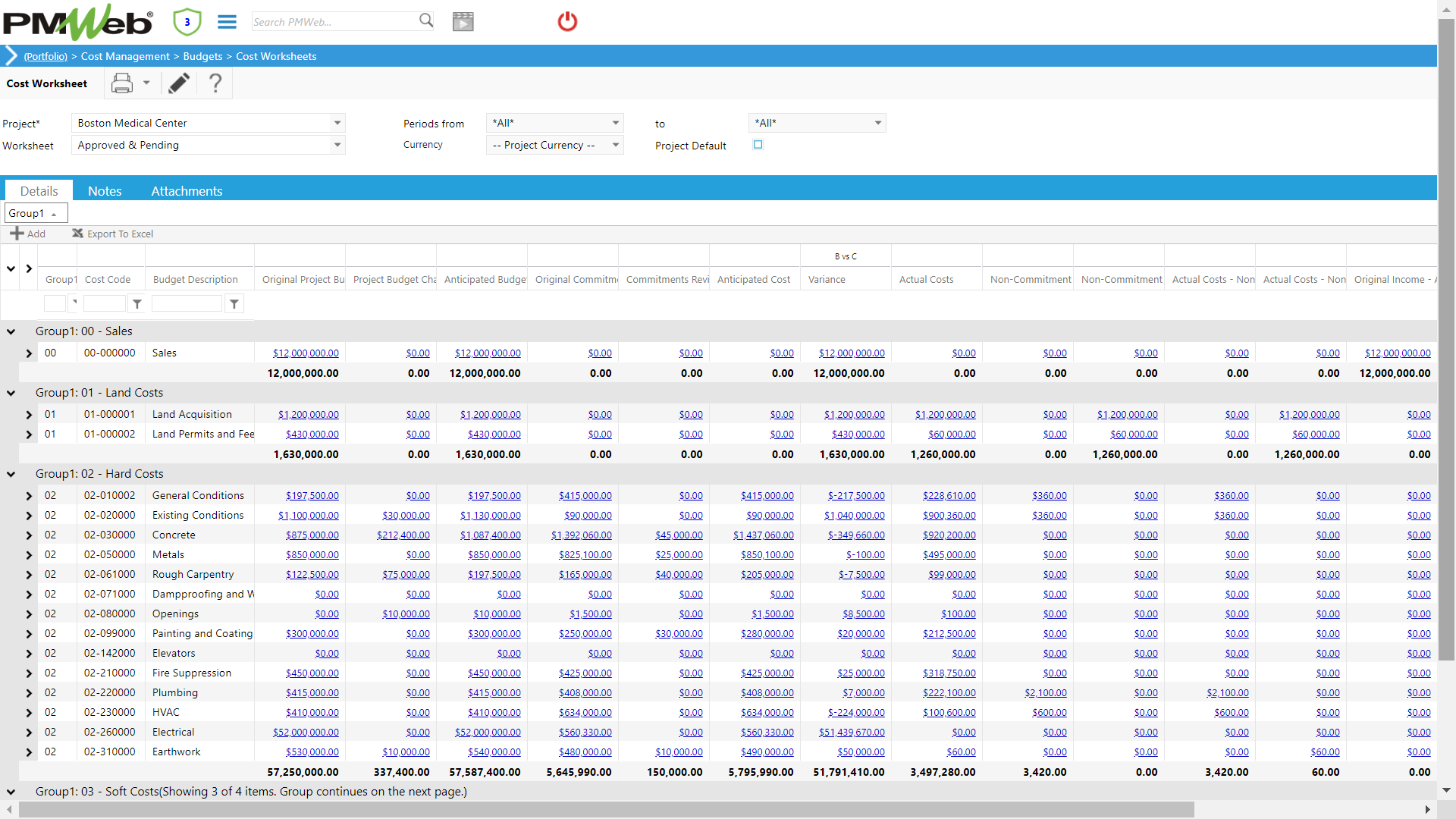 PMWeb allows exporting the cost worksheet into an MS Excel file format if there is a requirement to analyze or modify the reported information. In addition, and similar to all other PMWeb default forms ad reports, PMWeb comes ready with a cost worksheet report that can be customized and modified to meet the project owner’s branding and report format requirements. 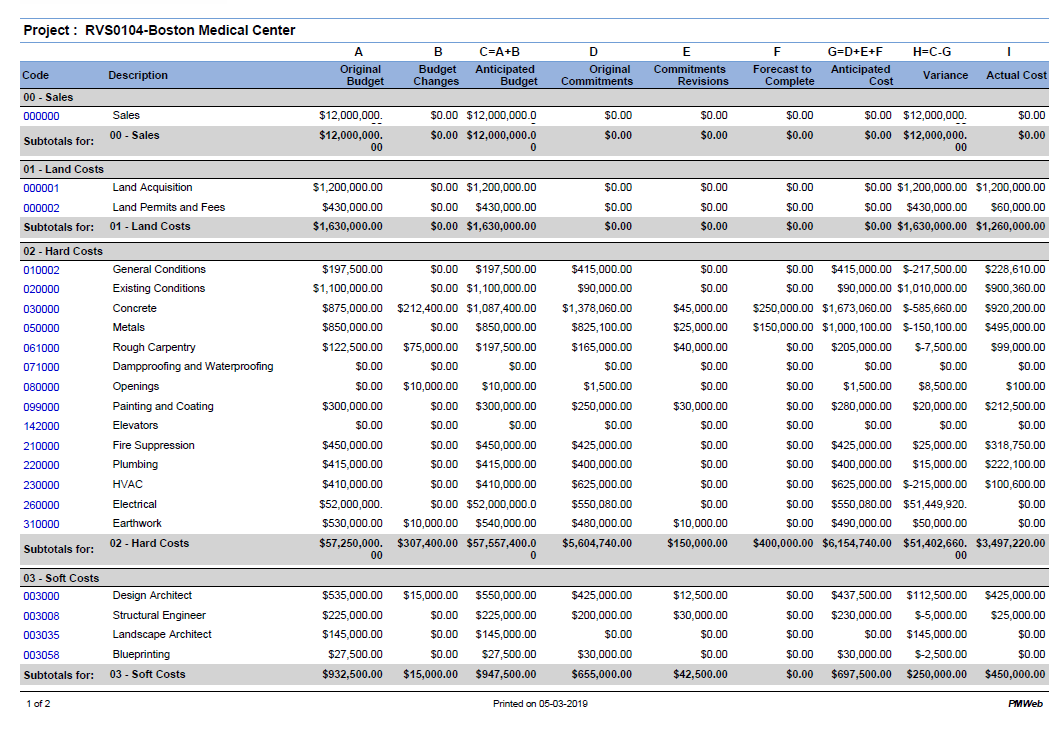