Article #141 Why Contractors Need to Use the Earned Value Method to Monitor, Evaluate and Report their Project Budget Performance?

In the Middle East and North Africa (MENA) region, having unbalanced bids is not forbidden. Unbalancing a bid will result in having some bid line items overpriced while others are underpriced but ensuring that the overall total bid price is competitive enough to win the bid. In other words, part of the project’s scope of work will have a high-profit margin while others will have a very low-profit margin if not a loss. Although this will be of great concern to project owners as this might encourage fraud when high-priced items increase while low priced decrease, nevertheless for a contractor, this means that the awarded contract priced line items cannot be used to benchmark the project’s budget performance.

Therefore, it is critical to have a formal process to manage the budget performance. To start with, the contractor needs to finalize the Budget at Completion (BAC) which was the basis for coming up with the winning bid price. The BAC excludes the contractor’s overhead including finance cost and profit as well as the management reserve (MR) and will only include the project direct and indirect cost and project contingency. Management reserve is defined as the cost reserve that is used to manage the unidentified risks or “unknown-unknown” and it is not a part of the budget at completion baseline, and the contractor’s project manager needs management’s permission to use this reserve.

The indirect cost will include in addition to the profit allocated to the project management team, site overhead cost which will be captured using timesheets and miscellaneous invoices for other types of overhead expenses. The direct cost will include all outsourced subcontract and material supply agreements as well as internal company agreements like for example the agreement between the project and the company batching plant for the supply of concrete. Similar internal agreements will be made for the supplied material which is usually purchased in bulk by the contractor for all projects. The actual cost for all those agreements will be captured using interim progress invoices.

The Project Budget At Completion (BAC) and Planned Values (PV)

Project management information systems (PMIS) like PMWeb provide the organizations with a single integrated platform to monitor, evaluate and report the project’s earned value performance. The Budget Module and Budget Request Module will be used to develop the project budget at completion (BAC) which will cover all direct and indirect cost elements as well as the project contingency. The cost elements can be aligned with the project’s work breakdown structure (WBS) or the company’s own cost control accounts. Nevertheless, the PMWeb budget module allows assigning the WBS level to each cost element when the cost control accounts are used. In addition, the PMWeb budget module allows creating the planned spending projection curve for each cost item to calculate the planned budget spending value (PV) for each period. The distribution of the budget projection can be based on one of the available distribution levels or manually distributed. In addition, PMWeb allows linking the relevant project schedule activity to capture the planned start and finish date of each cost item.

PMWeb Commitment module will be used to capture the details of all outsourced scope of work contracts to subcontractors and suppliers as well as internal company contracts. Internal company contracts could be the contract between the project team and the contractor’s batching plant, plants department among others. Those commitments will become the basis for capturing the progress invoices for each period which represents the actual cost (AC).

PMWeb Timesheet module will be used to capture the contractor’s site overhead expenses. The timesheets will be used to capture the actual hours of all labor and equipment resources spent on the project. PMWeb allows defining different rates for the resource charges to cover normal, overtime, weekend, holiday, and other types of pay rates that the contractor might need to have.

PMWeb Miscellaneous Invoices will be used to capture other non-commitment costs including the cost imported from the contractor’s ERP or accounting system. This module will be also used to capture the cost of permits, tests, fees, and other charges that could be applied against the project.

Commitment contracts are not only created from actual contract agreements between the contractor subcontractors and suppliers but they can be also used to create internal company commitments. For example, a commitment contract will be created between the Contractor Company and the Contractor Project Manager which will be created for the project contingency. The commitment invoice module will be used to capture all consumptions of the project contingency.

On monthly basis, the updated contractor’s schedule will be imported into PMWeb to capture the approved percent complete values for the progressed activities. Those percent complete values will be the basis for calculating the earned value (EV) for each cost item associated with the activity. PMWeb Scheduling module allows importing and storing the updated project schedule for each period.

PMWeb Forecast module will be the module to capture all of the above cost information. For each period, the forecast module will capture the budget at completion (BAC), planned value (PV), actual cost (AC), and earned value (EV) for each cost item. The forecast will also include the project schedule activity linked to each cost item along with the imported percent complete. As an option, the percent complete can be added directly without the schedule import. 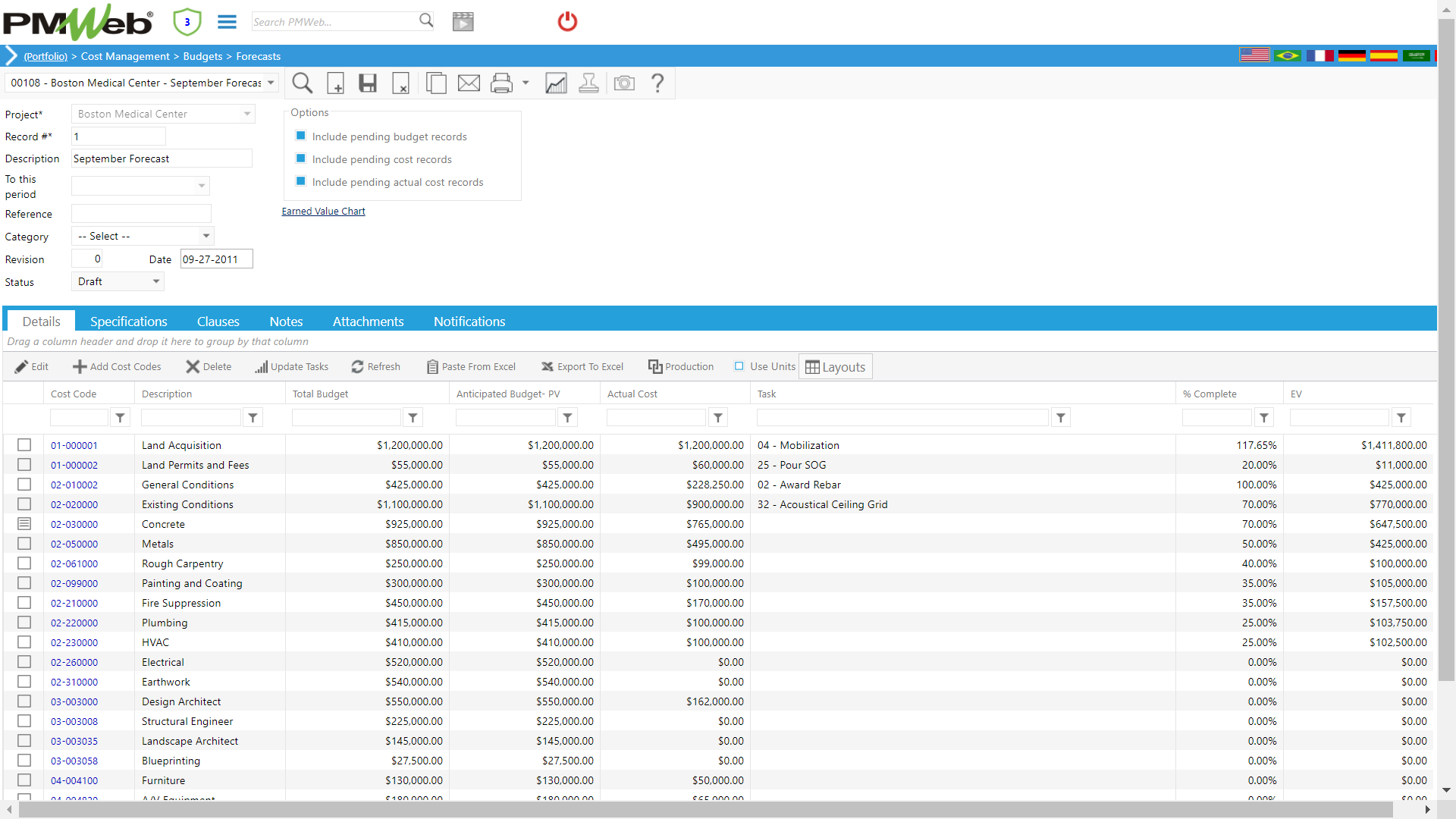 In addition, the To Complete Cost Performance Index (TCPI) can be also calculated which is “(BAC-EV)/(EAC-AC)”. The TCPI is the cost performance index that the contractor needs to achieve to ensure that there will no variance between the BAC and EAC. 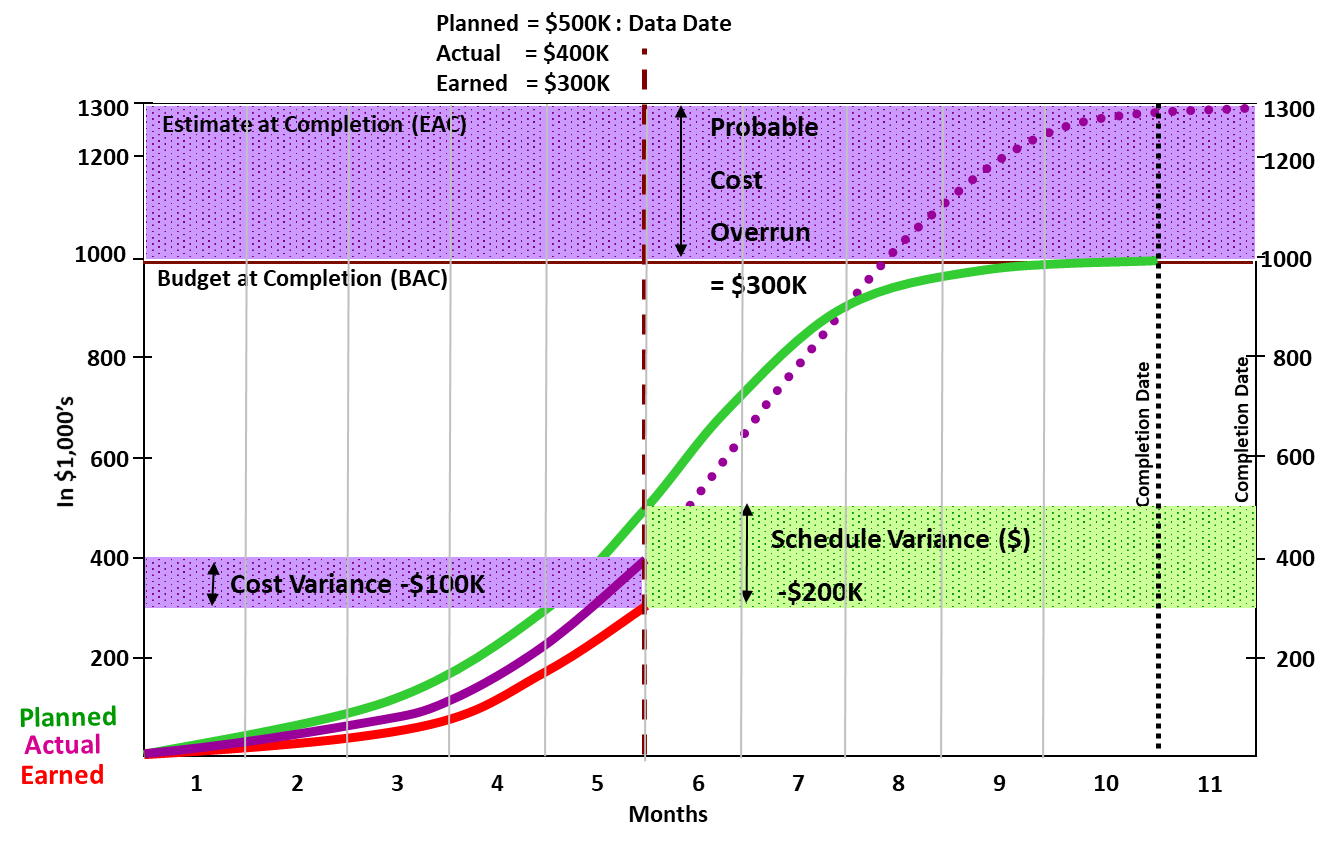 The Estimate To Complete (ETC) will be adjusted to reflect the past period’s performance which will be reflected in the calculated Cost Performance Index (CPI). If the current variances are seen as atypical and similar variances will not occur in the future, then ETC will equal (BAC- EV). That is to say, it will not be adjusted.

All those values, variances, indices, and other earned value measures will be calculated and captured in the PMWeb Forecast module. In addition to the default metrics included in the Forecast module, PMWeb allows adding ten new fields with each having its value calculation formula. 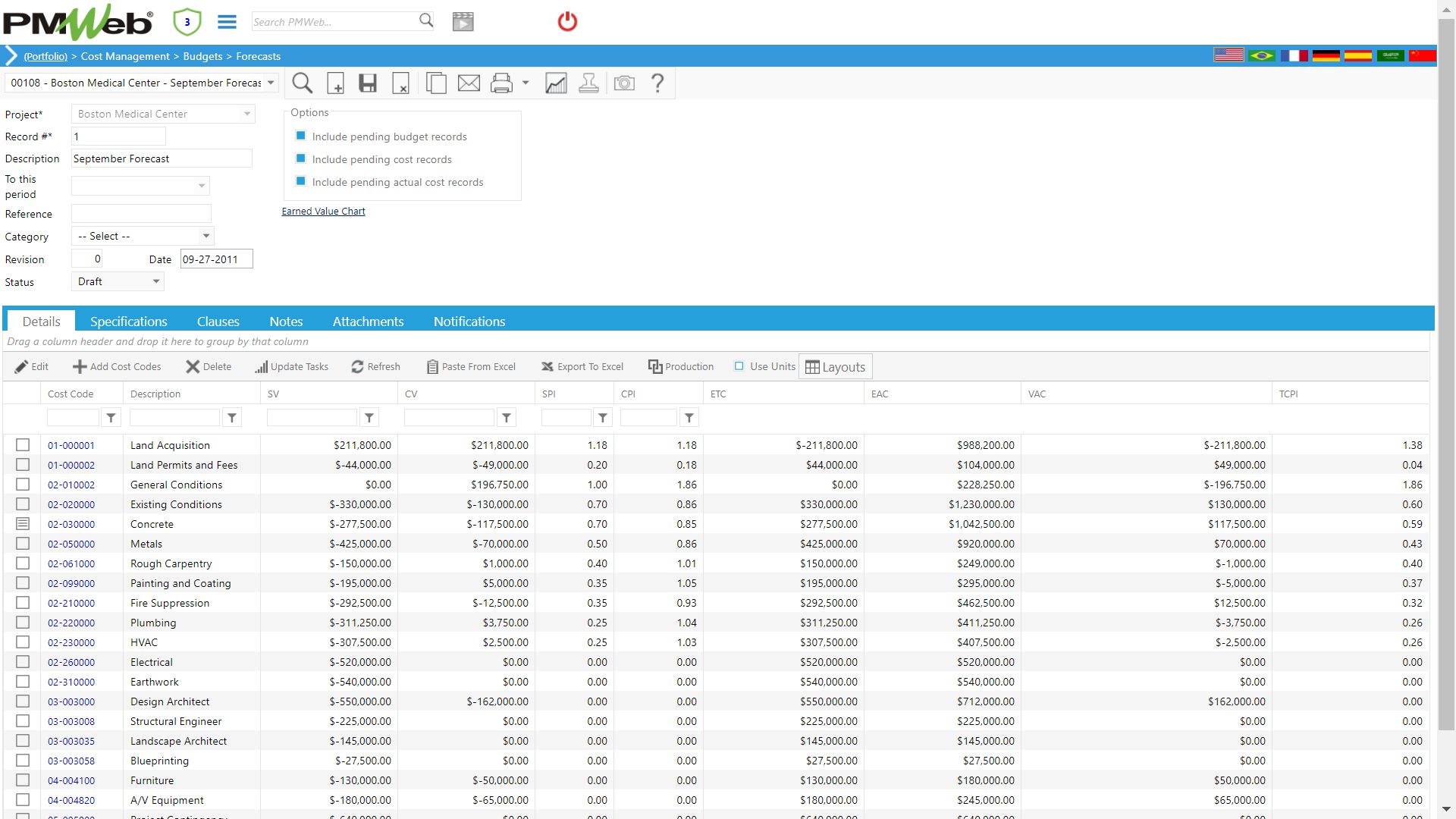 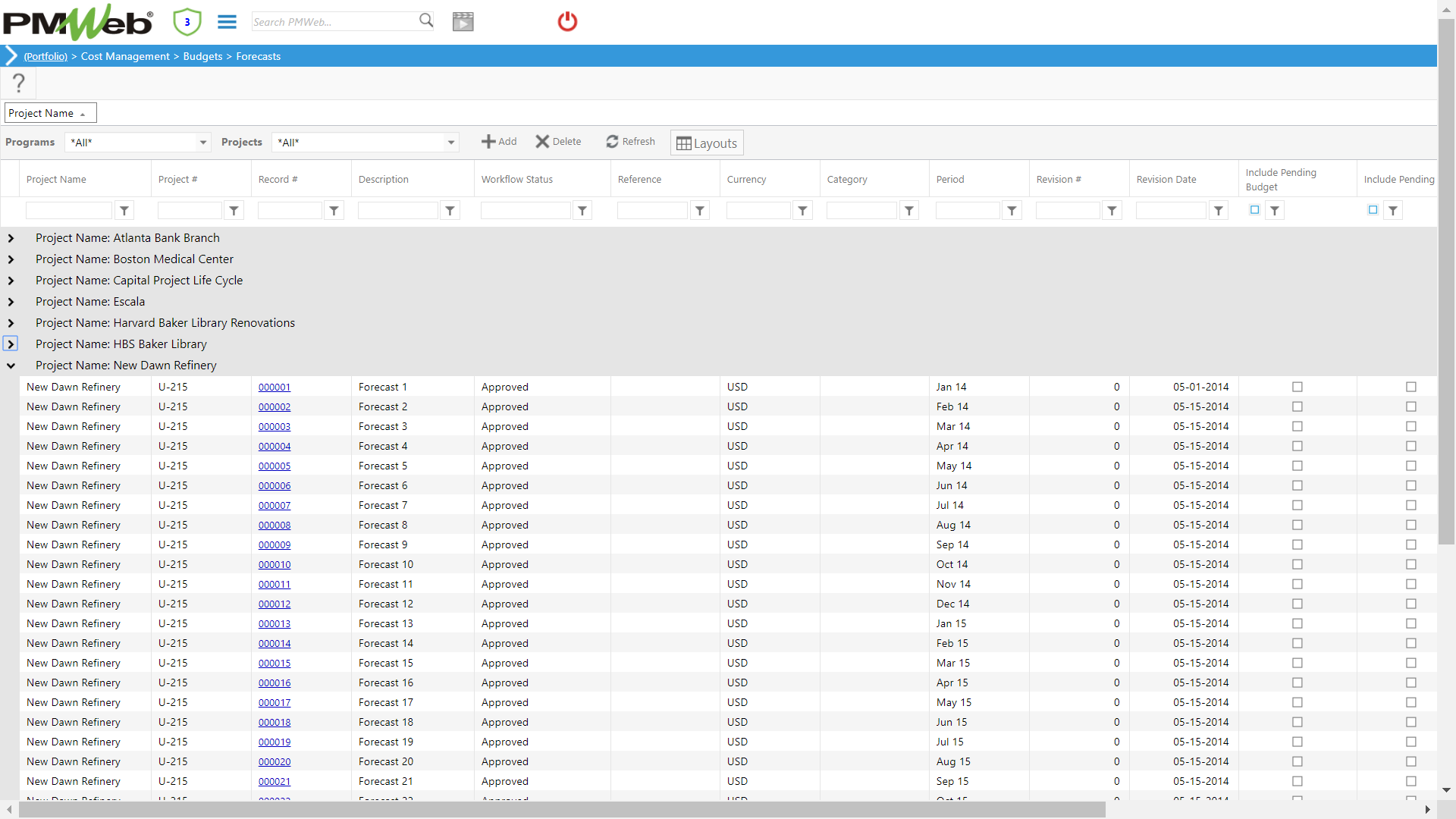 Supportive Documents and Formal Approval of All Processes

Similar to all other PMWeb modules, all supportive documents including the updated project schedule report can be uploaded into the PMWeb document management repository and attached to the relevant budget, budget adjustment, commitment, change order, progress invoice, timesheet, miscellaneous invoices, imported project schedule, and forecast period report. In addition, links to the approved progress invoice as well as other PMWeb records and imported MS Outlook emails can be linked to those forms.

To ensure that the above processes are formally reviewed and approved, similar to other PMWeb forms, a workflow will be assigned to relevant budget, budget adjustment, commitment, change order, progress invoice, timesheet, miscellaneous invoices, imported project schedule, and forecast modules to ensure formal review and approval for the reported information. The workflow will include all the steps assigned to the relevant project team members to review and add all necessary comments before it is formally approved. 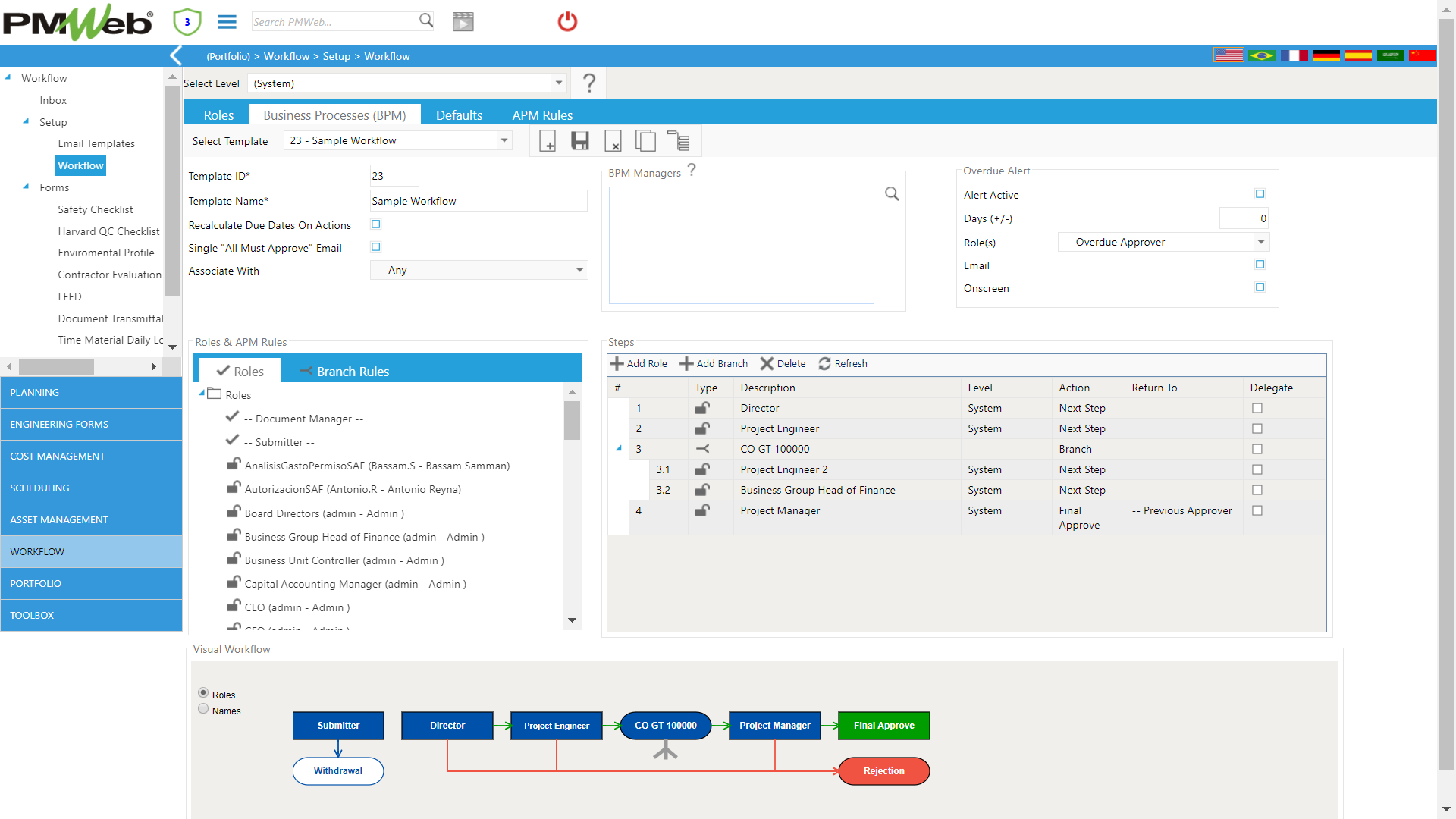 The captured project’s performance data can be designed in different forms and formats to Fulfill the organization’s reporting requirement. Nevertheless, the one that is used most is a report that details the earned value method key values for each period which include the approved budget at completion (BAC), planned budget value for the current period (PV), earned value for completed works (EV), total actual cost to date (AC), estimated cost to complete the balance of the works (ETC) and project estimate at completion (EAC). 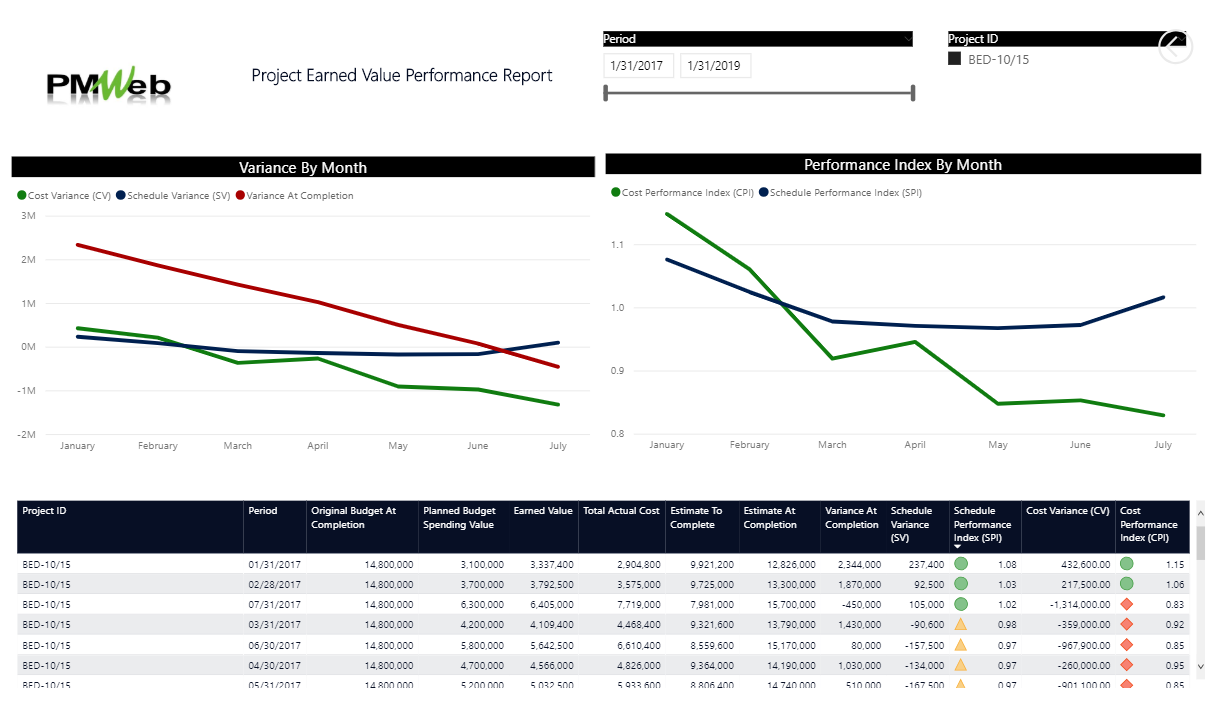 In addition, the organization could monitor, evaluate and report on the variances and indices across the organization’s complete projects portfolio or selected projects that could be part of a program or any other attribute like location, type, sponsor among others. The organization might display the earned value as a scorecard or link it to a map that will display the location of the selected projects as well as the performance indices. The size of the bubble on the map could be used to reflect the project’s approved current budget. 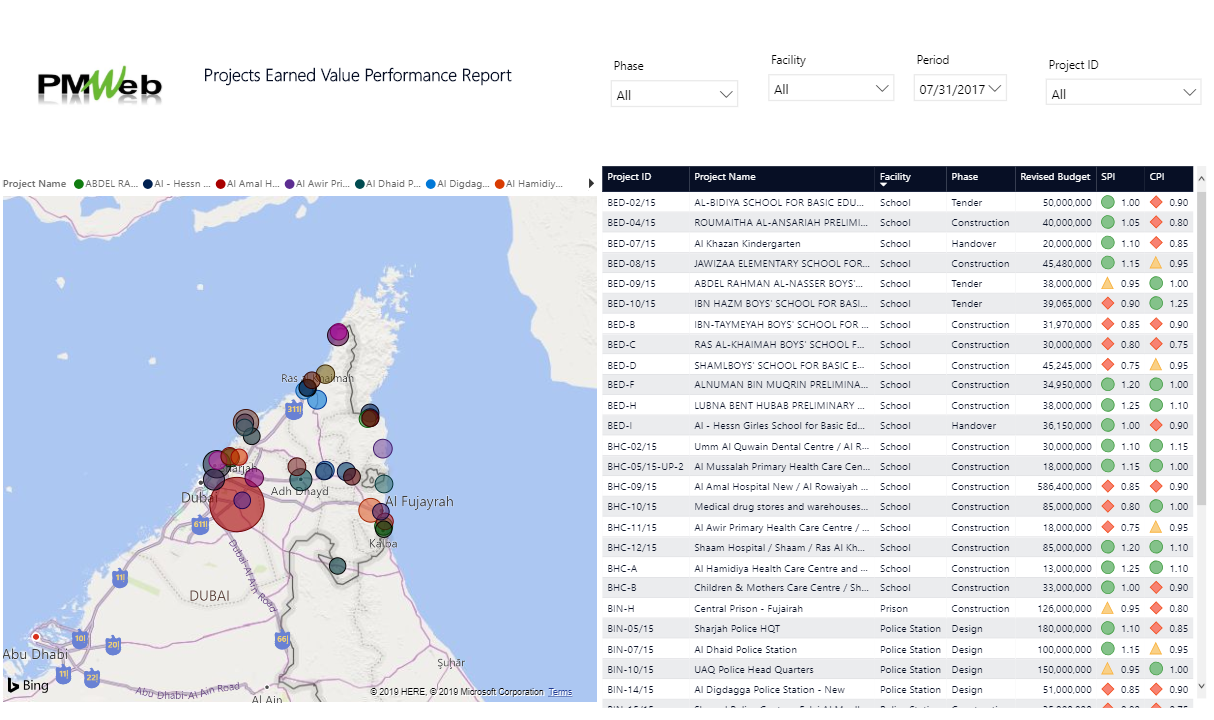