Using a Project Management Information System (PMIS) like PMWeb, the organization can ensure that the data needed to calculate those key performance indicators are robust, reliable, relevant, auditable, appropriate, attributable, traceable, transparent, and trustworthy. This will be made possible by automating the needed project management processes to ensure that the right data is captured by the right team member, in the right format, and the right sequence.

Deciding on the KPIs to Monitor and Evaluate and their Importance

LTIFR is a proxy measurement for safety performance. A lost-time injury is something that results in a fatality, permanent disability, or time lost from work. It could be as little as one day or a few hours. LTIFR refers to the number of lost-time injuries within each month, relative to the total number of hours worked in that period.

To convert the LTFIR into a measure of 100%, the LTFIR calculated value needs to be divided by the building construction industry rate for the country where the project is being executed. For example, Australian and New Zealand Standard Industrial Classification (ANZSIC) set the LTFIR for building construction at 5.6. The organization can then set the favorable performance for LTFIR when it is less than 5.6 and the unfavorable performance it is more than 5.6.

PMWeb safety incident module will be used to capture details of all project accidents including the number of lost time injuries in a specific month. The total hours worked in a month will be either captured from PMWeb daily report module or provided by the organization’s attendance system.

This key performance indicator measures the project management team’s ability to meet the forecasted expenditures for the fiscal year. For most organizations, failing to spend the approved budget for the fiscal year means that other organizations’ projects were deprived of using those funds which were blocked for the other project.

The allocated budget for the fiscal year will be captured from the PMWeb budget module while the actual cost for the same fiscal year will be captured from PMWeb commitments progress invoices and miscellaneous invoices modules. PMWeb also allows capturing actual costs from the timesheet module in case those expenses are needed to be part of the KPI.

The cost predictability is the ratio of the estimated project’s forecast at completion versus the approved original budget at completion. The estimated project’s forecast at completion includes the actual cost to date plus all approved and pending change orders (EAC). For lump-sum contracts and from a project owner perspective, the approved original budget already includes the awarded contracts value plus usually a 10% provision for contingency and scope creep (BAC).

This key performance indicator measures the project management team’s ability to maintain the estimated project cost at completion to what was originally approved and budgeted for. If a project’s actual cost exceeds the approved budget, this is an indication that the project has not achieved the target benefit or value for which this project was originally selected. For private project owners, this means a project with a lower internal rate of return (IRR) than what was originally planned.

Project completion date KPI is the ratio of the current project delay duration (measured from total float) to the elapsed project’s duration. Usually, project owners allow a 10% schedule buffer on their contractual project’s completion date. In other words, for a project that has a planned duration of 730 days, the project owner will usually allow 73 days buffer to the actual need date. Of course, this could vary from one organization to another and even from one project to another.

This KPI will be calculated using the PMWeb scheduling module which can be either used to create the project’s baseline schedule and follow on updates or import this schedule data from Oracle Primavera P6 or MS Project.

The total number of pending non-compliance reports KPI will indicate how successful the project team is in having all reported non-compliances resolved by the contractor or other project stakeholders. PMWeb custom form builder will be used to create an NCR template to capture the details and status of all issued NCRs. Non-compliance reports are usually related to quality but they can also include safety NCRs.

The KPI for the total number of High Priority Issues that are pending resolution will indicate how successful the project team is in resolving all issues that could have a significant impact on the project’s completion date. PMWeb custom form builder will be used to create the Issue template to capture the details and status of all escalated issues.

As detailed earlier, each key performance indicator (KPI) has a weight for which the sum of all KPIs’ weight will be 100%. This will help in calculating the weighted Project Performance Index (PPI) for each project at the end of each period in an objective format. It should be noted that for some projects, the weight distribution for the six key performance indicators could vary depending on the importance of those projects’ objectives to each project.

Those KPIs will provide the organization with a real-time single version of the truth monitoring, evaluation, and reporting for each project performance status across the organization’s projects portfolio. Using a PMIS like PMWeb, the report viewer could drill down to the data source that was used to calculate each KPI. For example, the user can drill down to the issues register to get the needed details on the reported pending issues. The same approach will be available for all other KPIs. 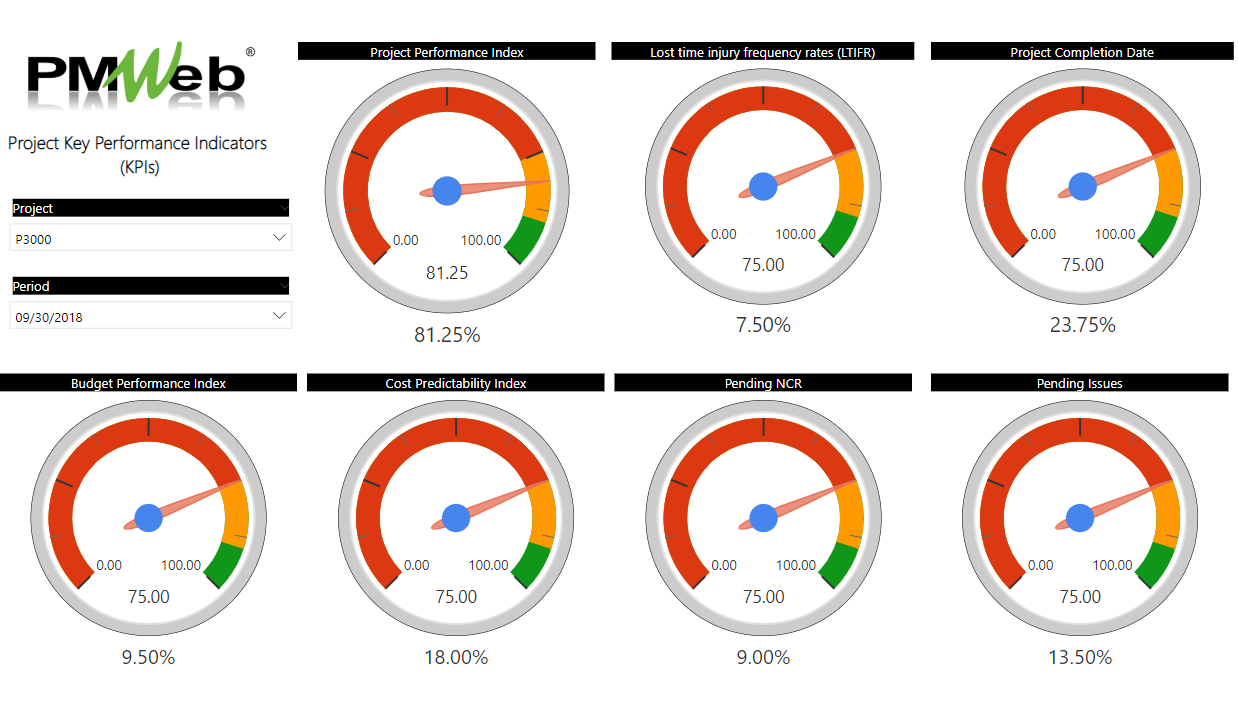 The key performance indicator (KPI) values for each project can be consolidated in a single dashboard to provide the organization’s executives with an overall status of their project portfolio performance. Graphical charts can be added to benchmark the performance of projects to each other. 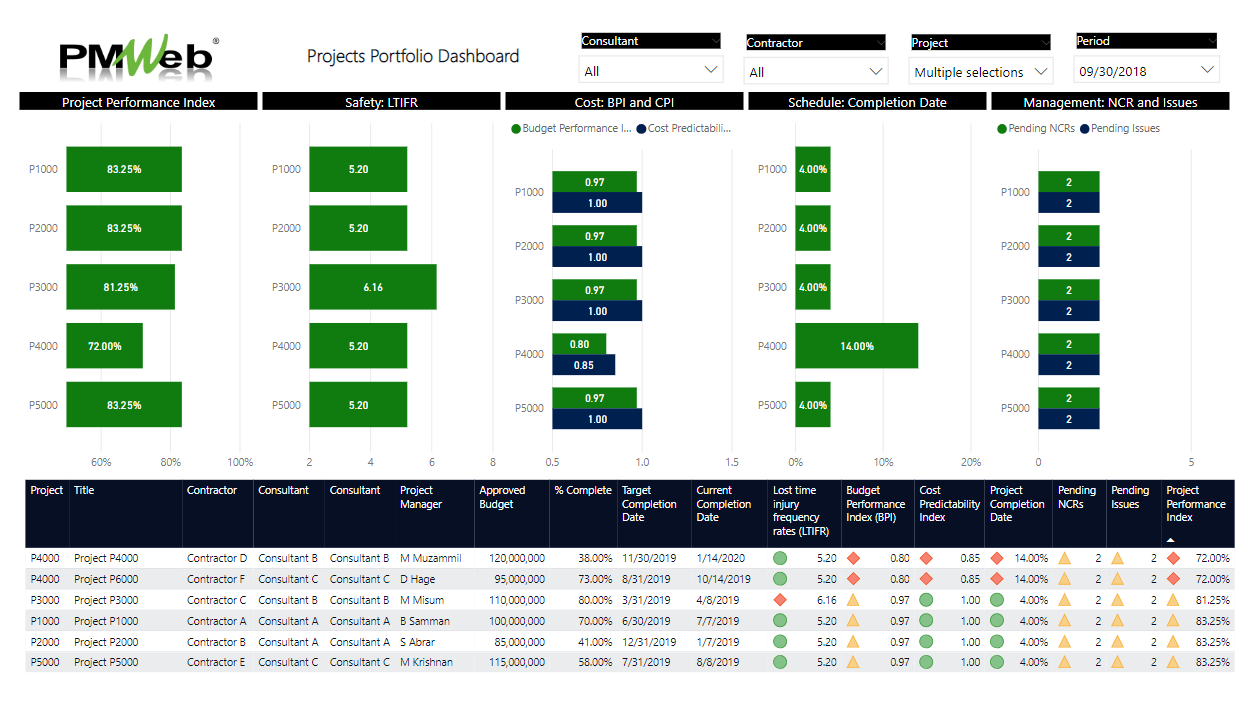 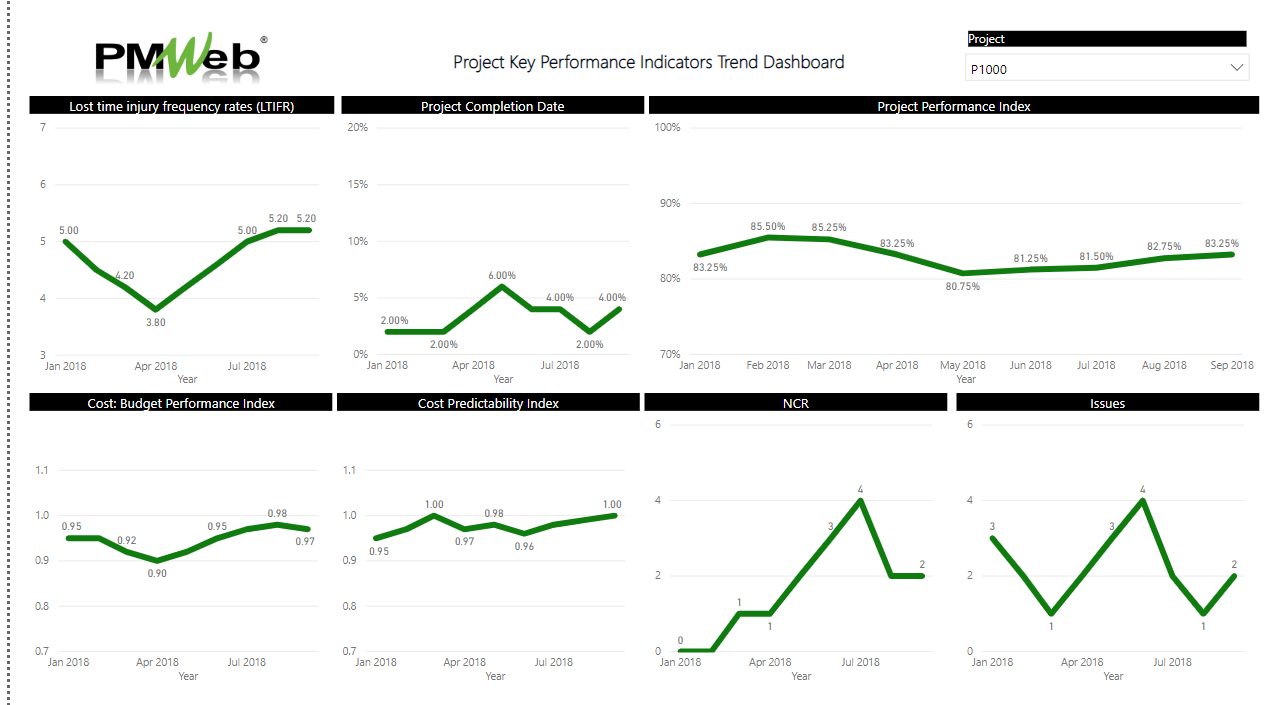