Article #098 What Cost Curves Capital Projects Owners Must Have to Monitor, Evaluate and Report a Real-Time Single Version of the Truth of Their Projects’ Performance and Status? 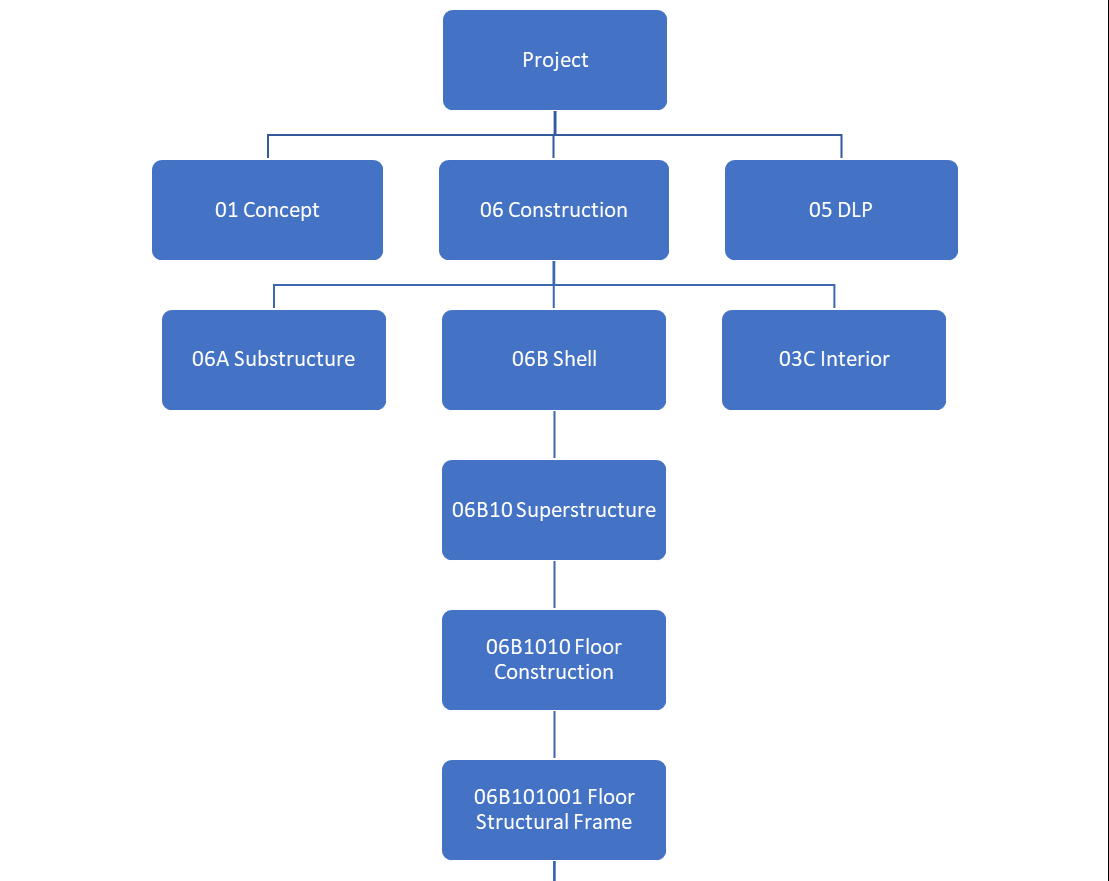 For capital projects’ owners, having cost curves to monitor, evaluate and report the performance and status of those projects’ financial performance is of great importance. Mainly there will be three curves to manage assuming that the awarded contracts on those capital projects will be based on lump-sum contracts. In other words, there will be no cost variance for completing the agreed scope of work. The approved cost associated with the additional scope of work will adjust the project budget and commitment contracts. Accordingly, the curves that will be monitored, evaluated, and reported on are the planned budget spending, actual cost or earned cost for completed and approved works, and the forecast cash flow for the balance work to complete.

Using a Project Management Information System (PMIS) like PMWeb, capital project owners will have a single platform to capture the details of all records needed to generate those curves as well as produce the needed reports and calculate the required measures. This will be achieved by using PMWeb ready-to-use modules for budget, budget adjustments, progress invoices, miscellaneous invoices, and forecasts.

Accordingly, the cost breakdown structure will be created using the PMWeb cost accounts module. The CBS will include the four UniFormat™ levels. This will enable the project management team to elaborate the project cost as the project’s scope of work gets better defined and detailed. 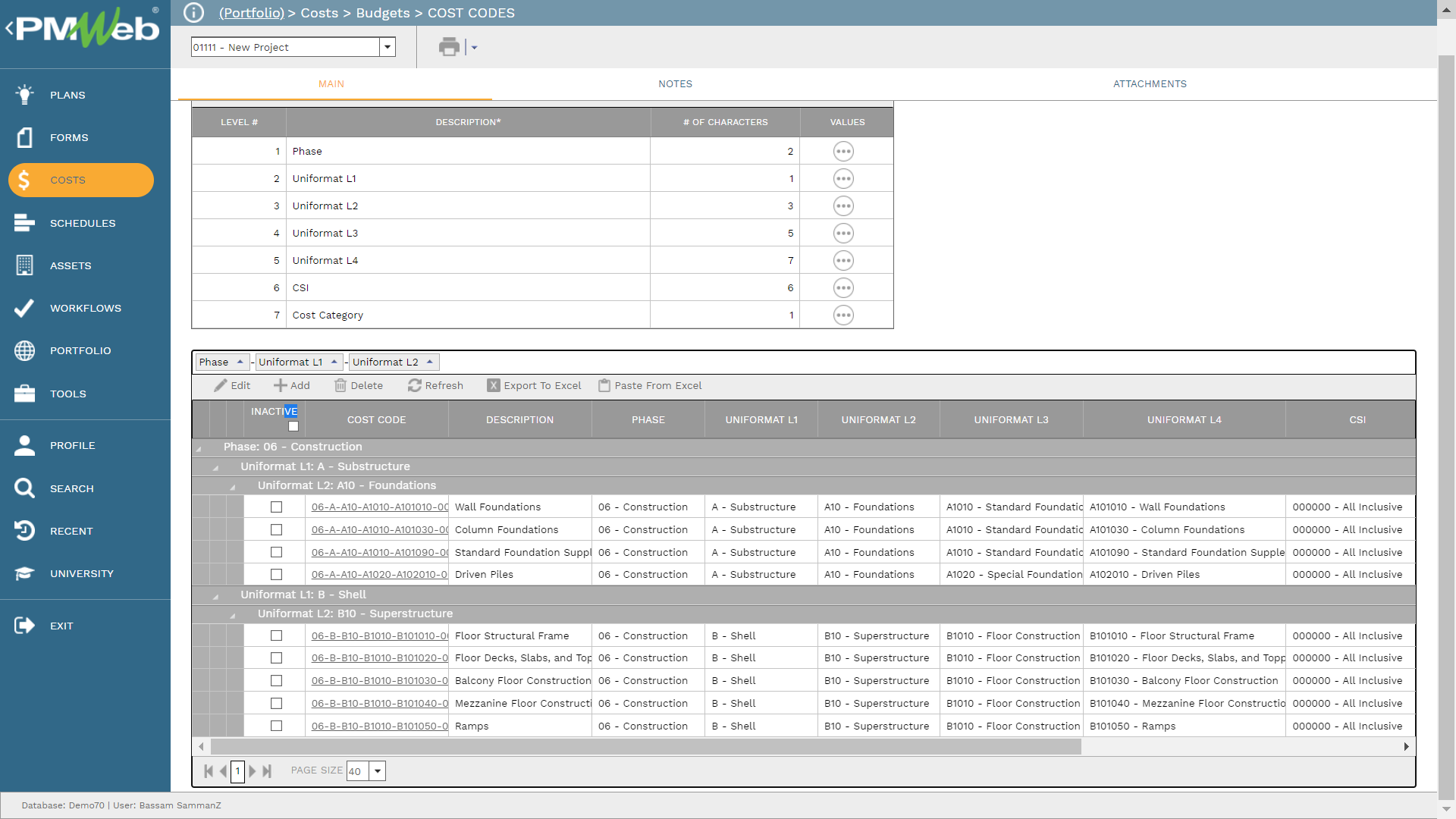 The budget represents the investment that has been approved by the capital project owner for the project under review. The budget will include all direct and indirect project costs as well as the allowance for contingency reserve. PMWeb budget module will capture the details of the approved budget as well as the planned spending plan for the project budget. PMWeb can maintain versions of all budgets created for the project but the final approved baseline budget should be based on the awarded commitment contract to ensure correct comparison as well as it should include the approved contingency amount. The planned budget spending plan will reflect the advance payment, advance payment recovery, retention, and retention release which are related to the award contract or contracts. 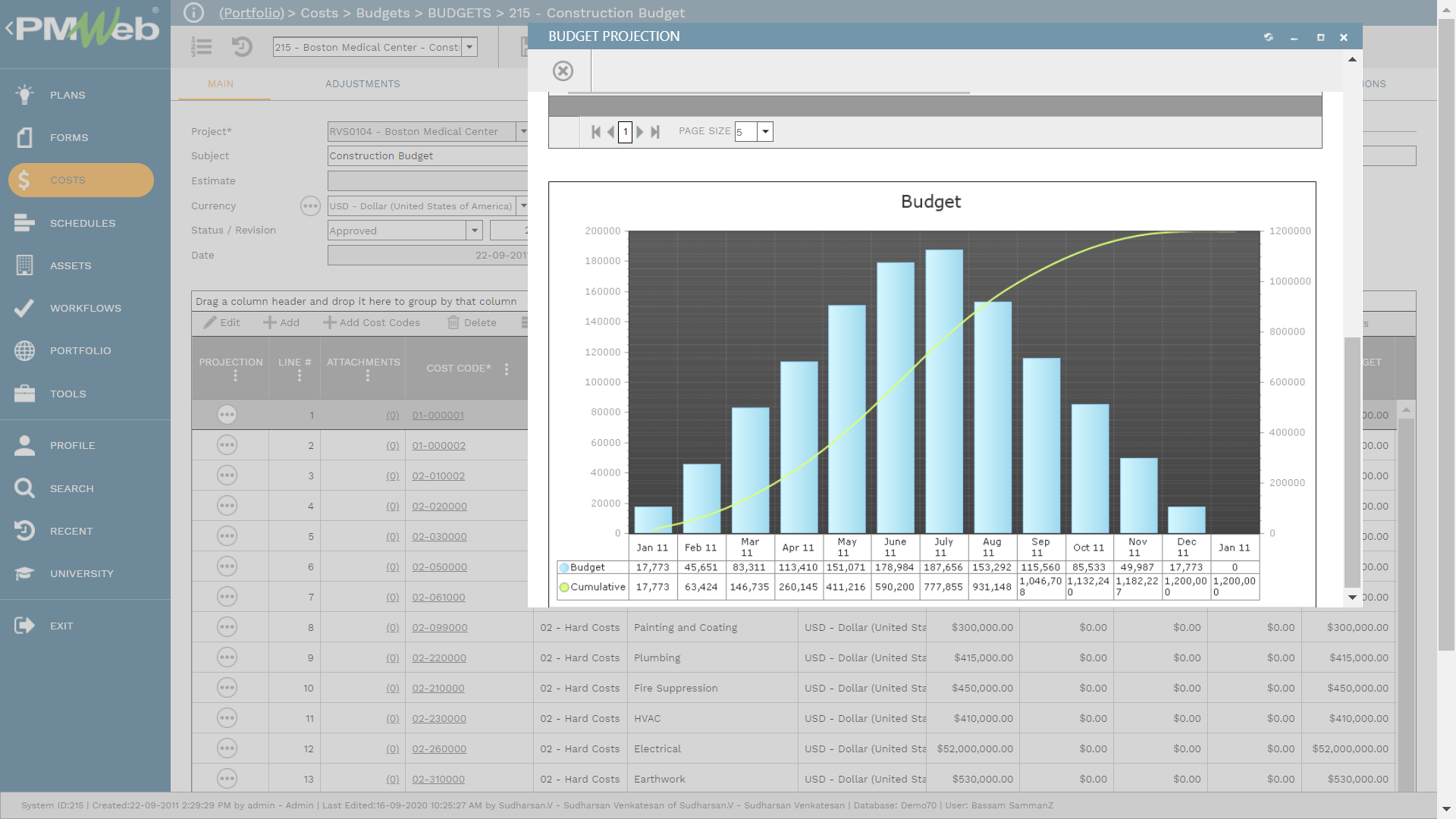 Any adjustments for the approved baseline budget will be captured using the PMWeb budget request module. Those could include funds transfers from one cost center to another, for example transferring funds from contingency to concrete works, as well as any adjustments that could result in increasing or decreasing the project budget. All those adjustments need to be posted to the relevant project period to ensure that the budget spending plan reflects the latest status. Similar to all other PMWeb modules, a workflow will be assigned to the budget adjustment to secure the needed reviews and approvals which will incorporate the approval authority levels. 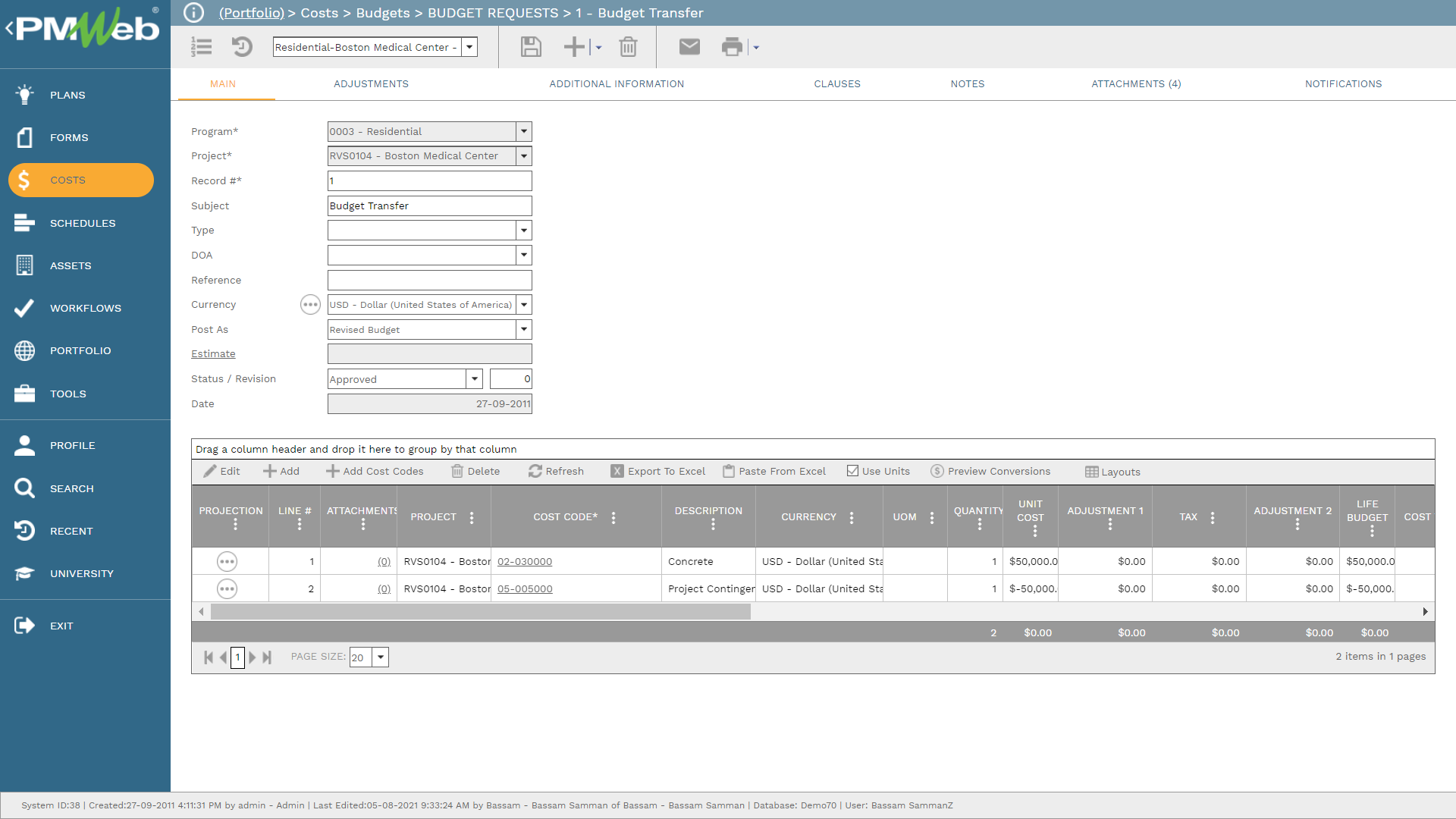 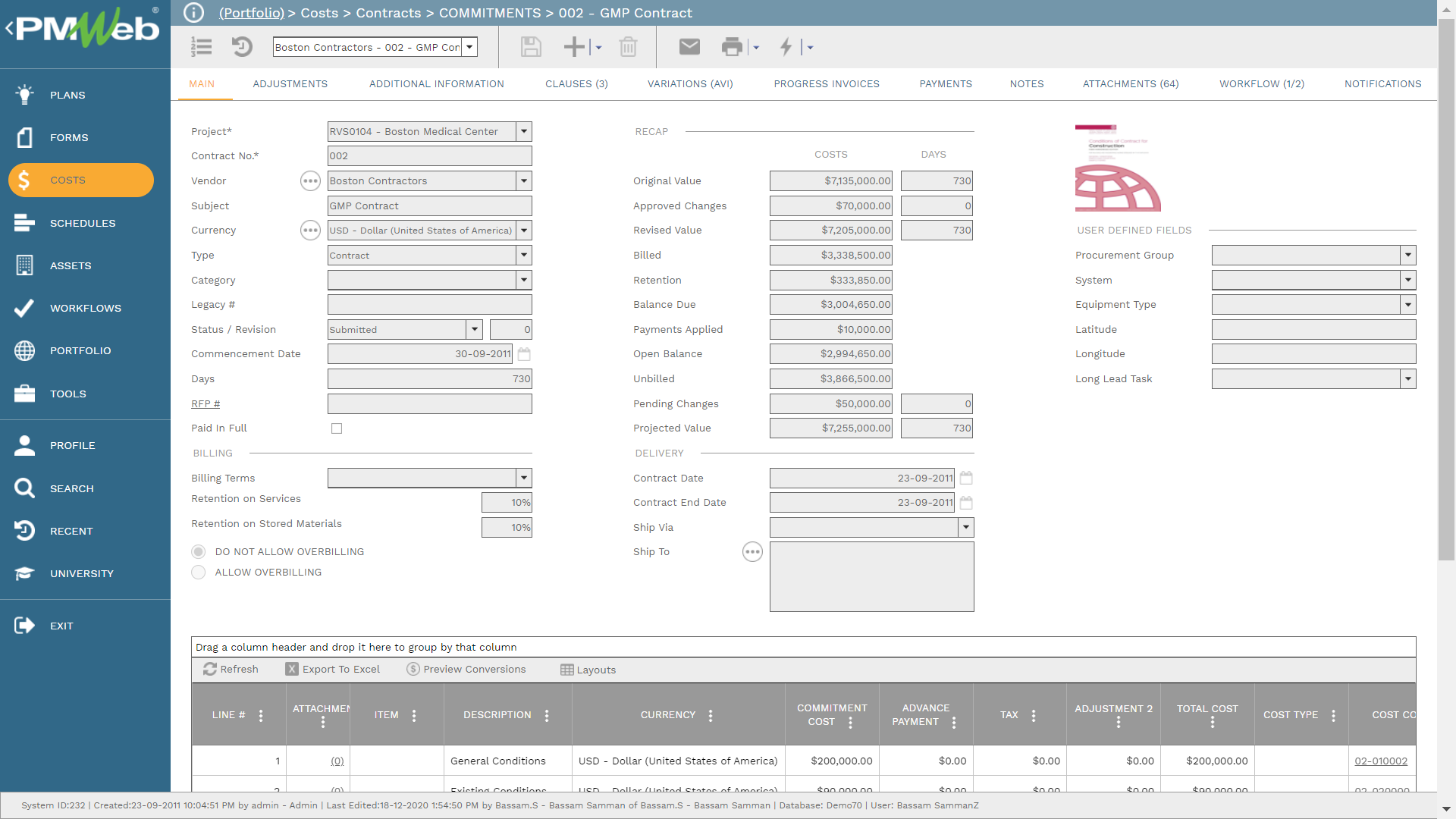 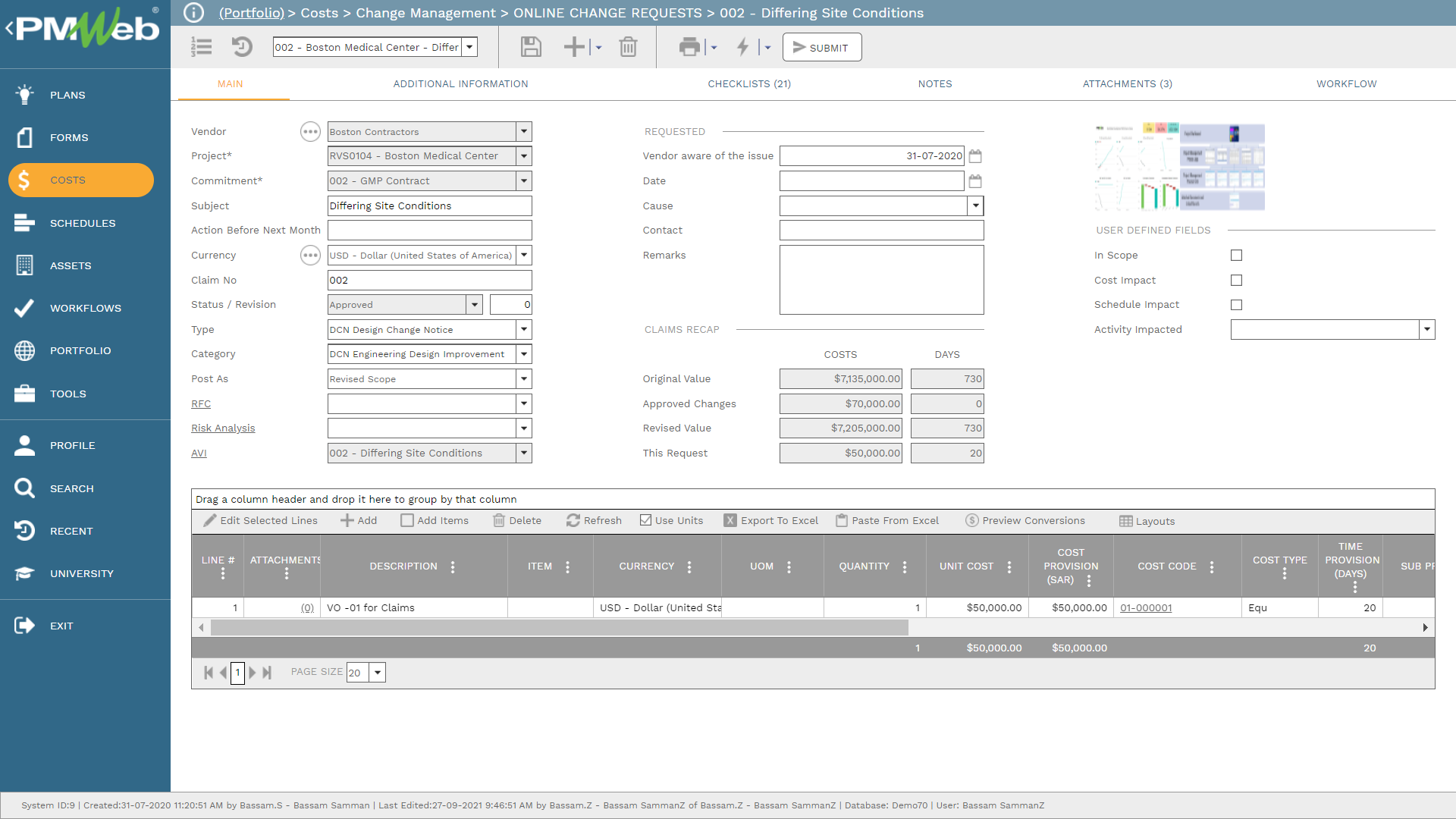 In addition, the PMWeb change order module will be used to capture all changes that could impact a commitment contract. The change orders will be posted to their respective periods to ensure that the commitment cash flow is complete and correct. Similar to other PMWeb modules, supportive documents will be attached to the change order as well as a workflow can be assigned to ensure the required reviews and approval are carried out. 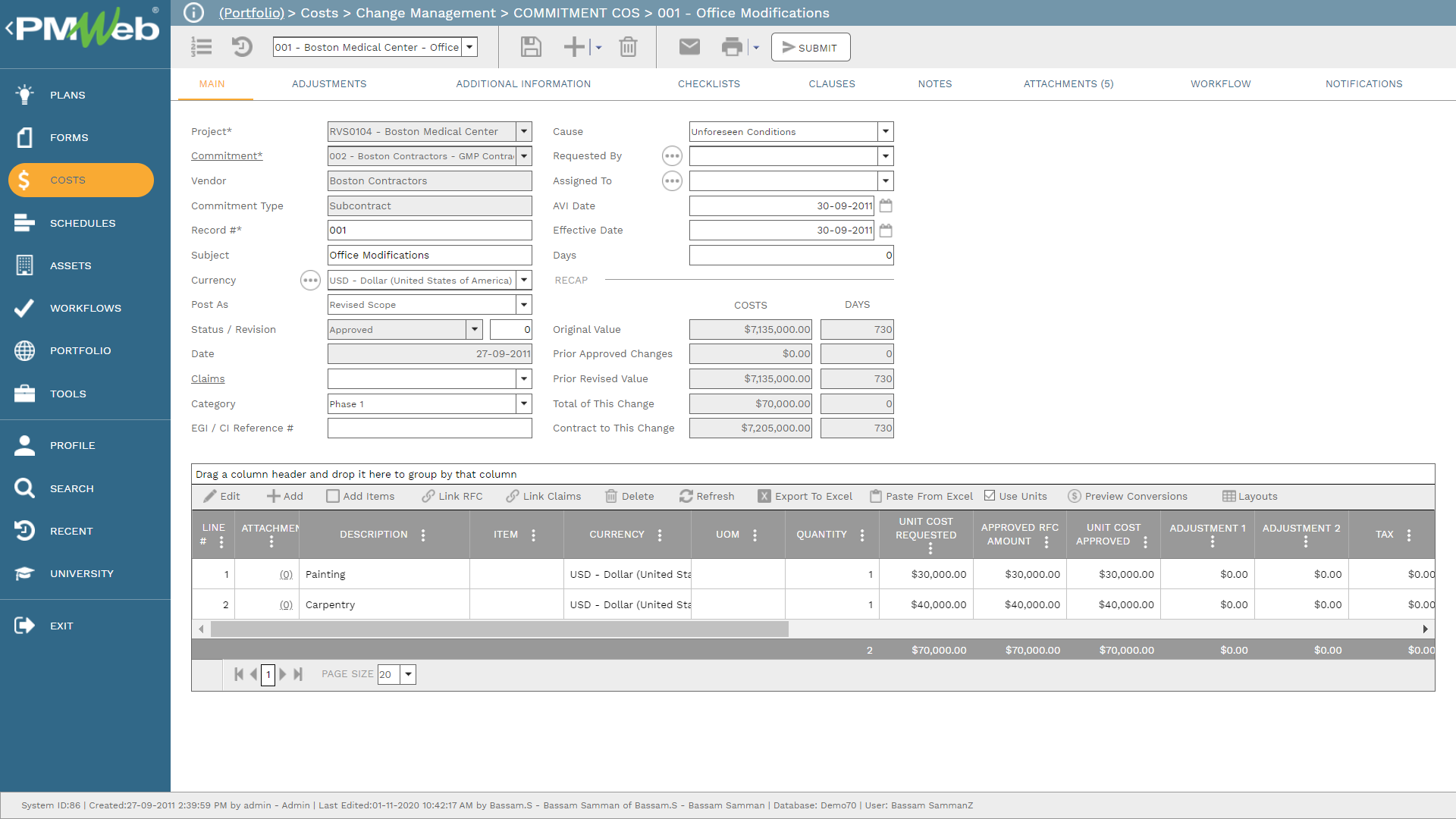 Ensure that there is proper alignment between approved change orders and budget adjustments. PMWeb change event module will be used. This module will list the change orders that are related to each budget request that could have increased or even decreased the approved baseline budget. 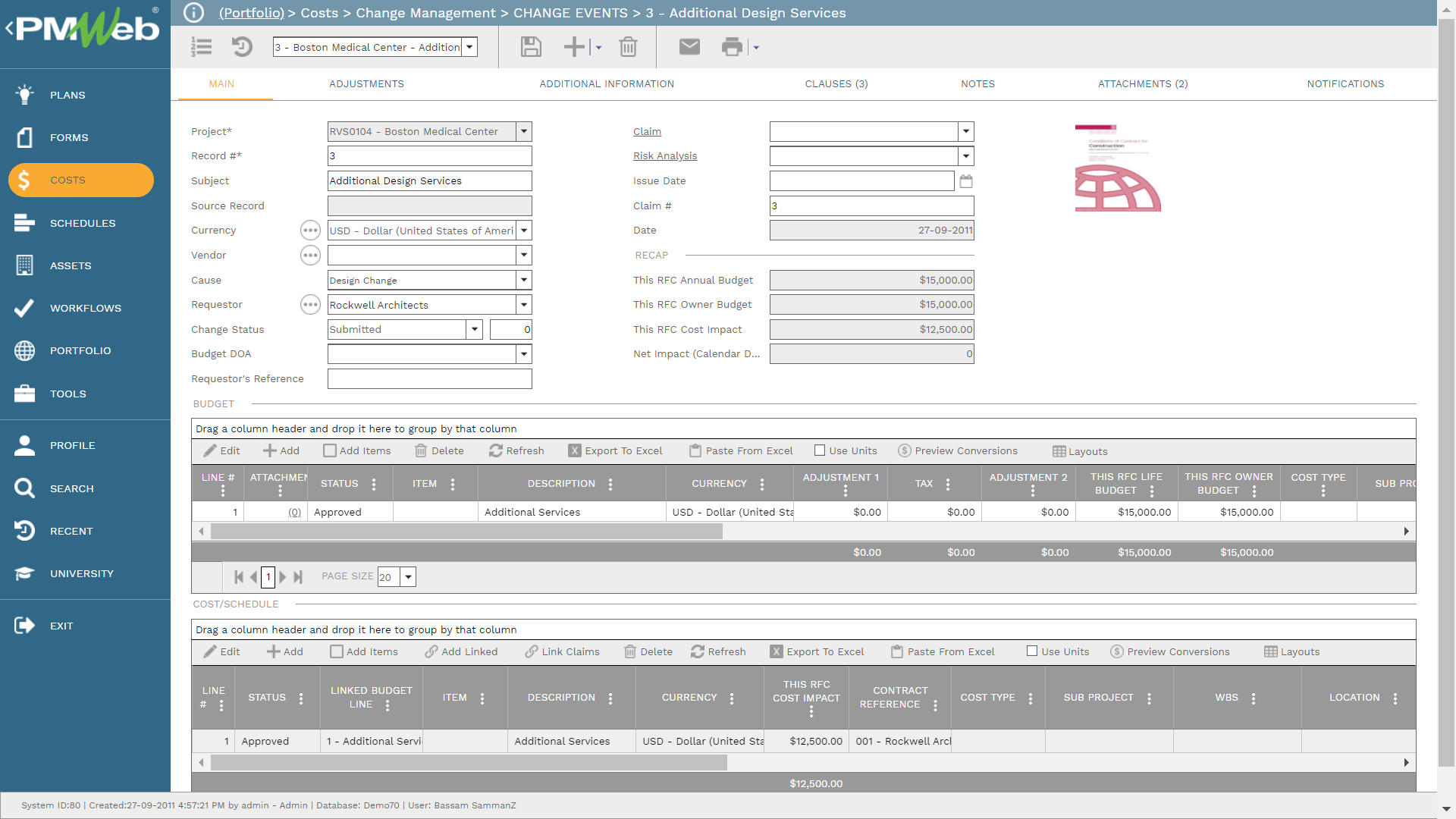 The second curve will be the actual cost curve which will be captured from the PMWeb Progress Invoice module which will calculate the approved payment to be made to the contractors at end of each period. The actual cost will reflect the advance payment, payment recovery, retention, and retention release values when they are paid. The progress invoice will also include payments made against approved change orders. In addition, the actual cost incurred by the project could be from non-commitment invoices. Those could include management expenses, purchase of land, and fees associated with permits among others. PMWeb miscellaneous invoices module will be used to capture those actual expenses. In addition, integration can be created with the organization’s ERP application to import those other expenses to the miscellaneous invoice module. 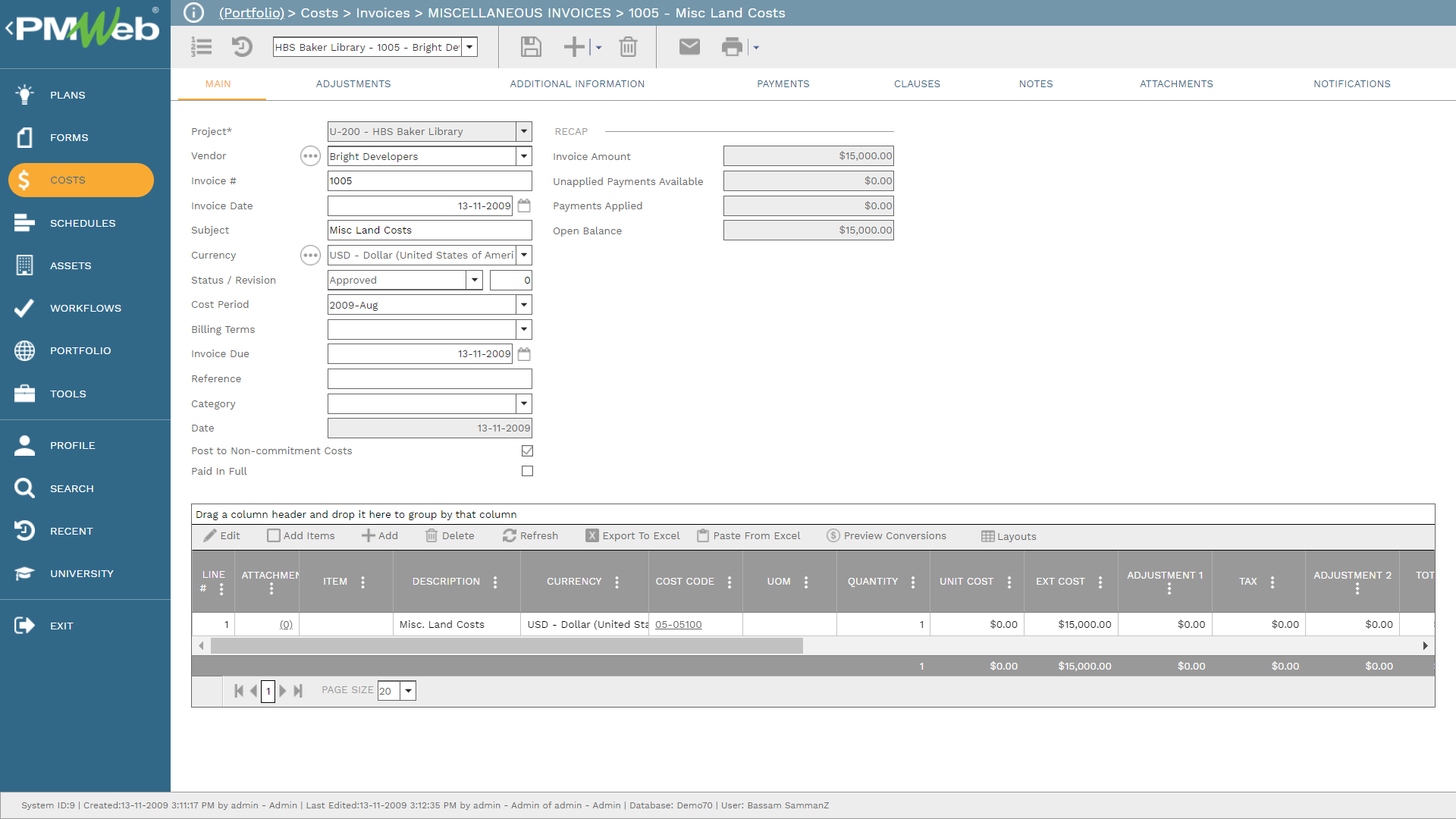 Further, project resources, labor, and non-labor, that are assigned to the project and are not part of a commitment agreement, the PMWeb timesheet module will be used to capture the spent hours of those resources. PMWeb allows setting different billing rates for those resources which could include regular, overtime, weekend, and holidays among others. 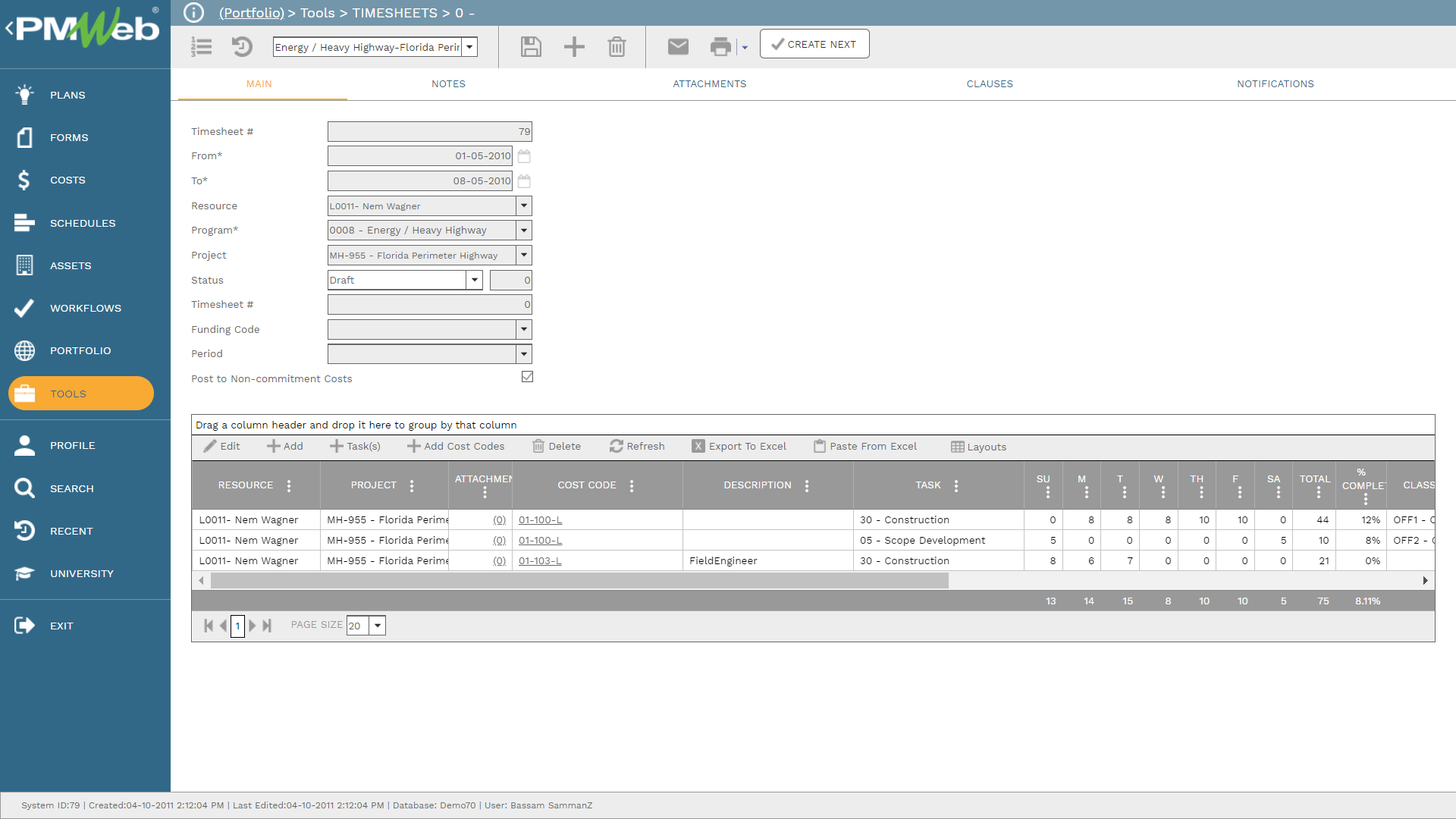 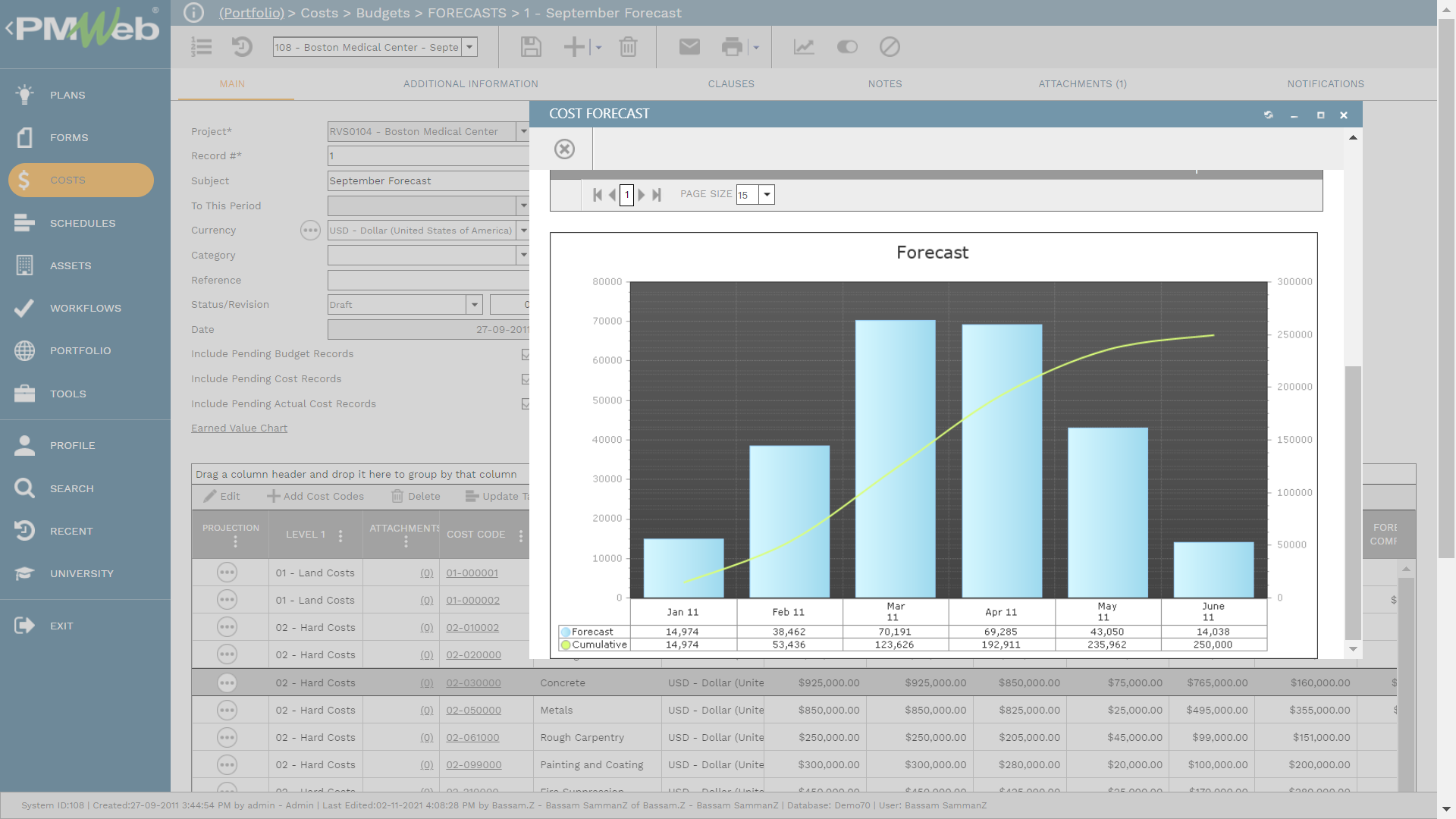 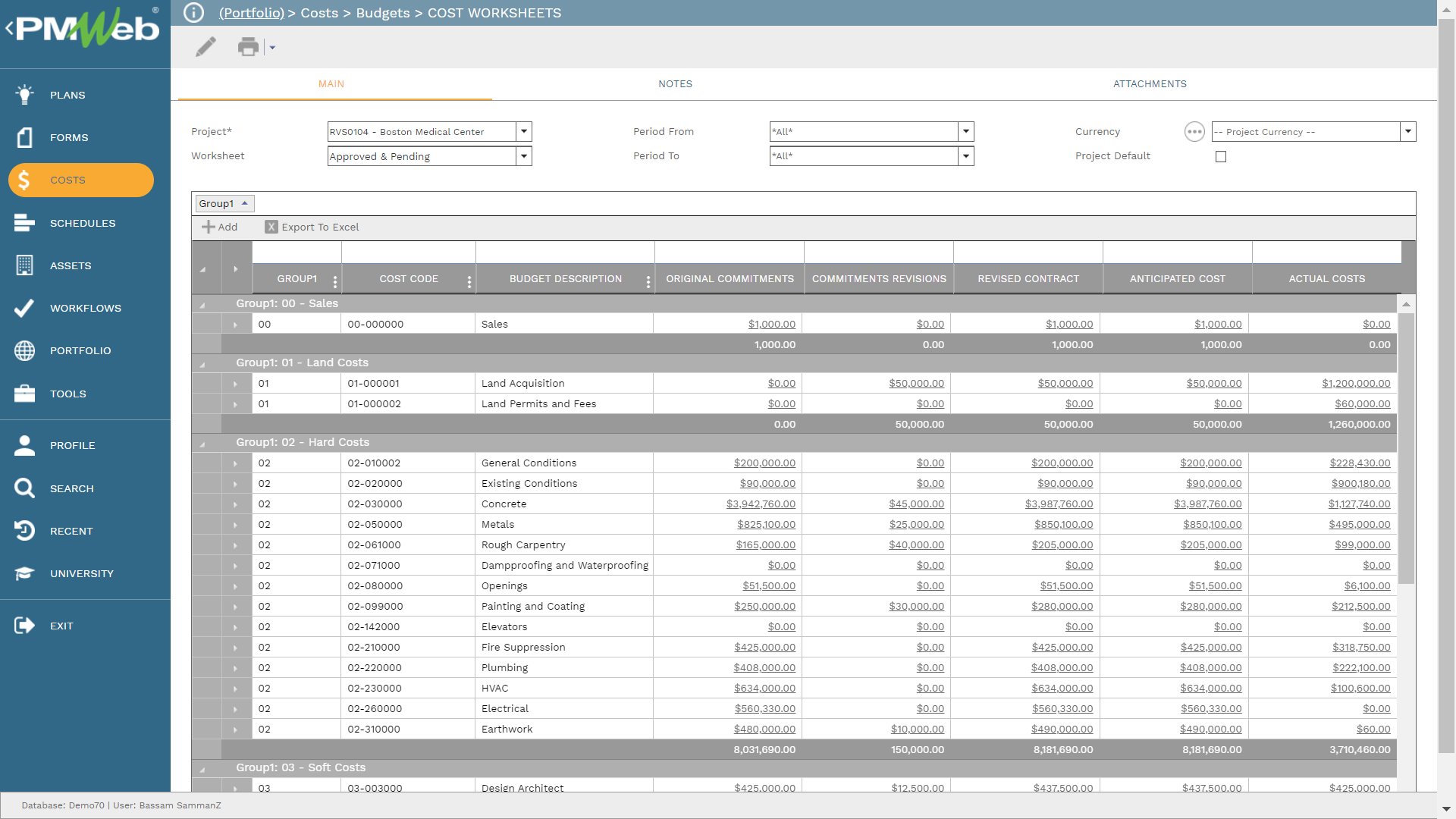 Accordingly, the three cost curves that capital project owners must have to monitor, evaluate and report a real-time single version of the truth of their projects’ performance and status are the planned budget spending, actual cost, and balance to complete. Using PMWeb report writer, a report will be created to present those curves for the project duration. In addition, the report will show the variance between what was budgeted and the actual cost or earned value per period. The report will also display the schedule performance index (SPI) at the current period along with the total variance or schedule variance (SV). 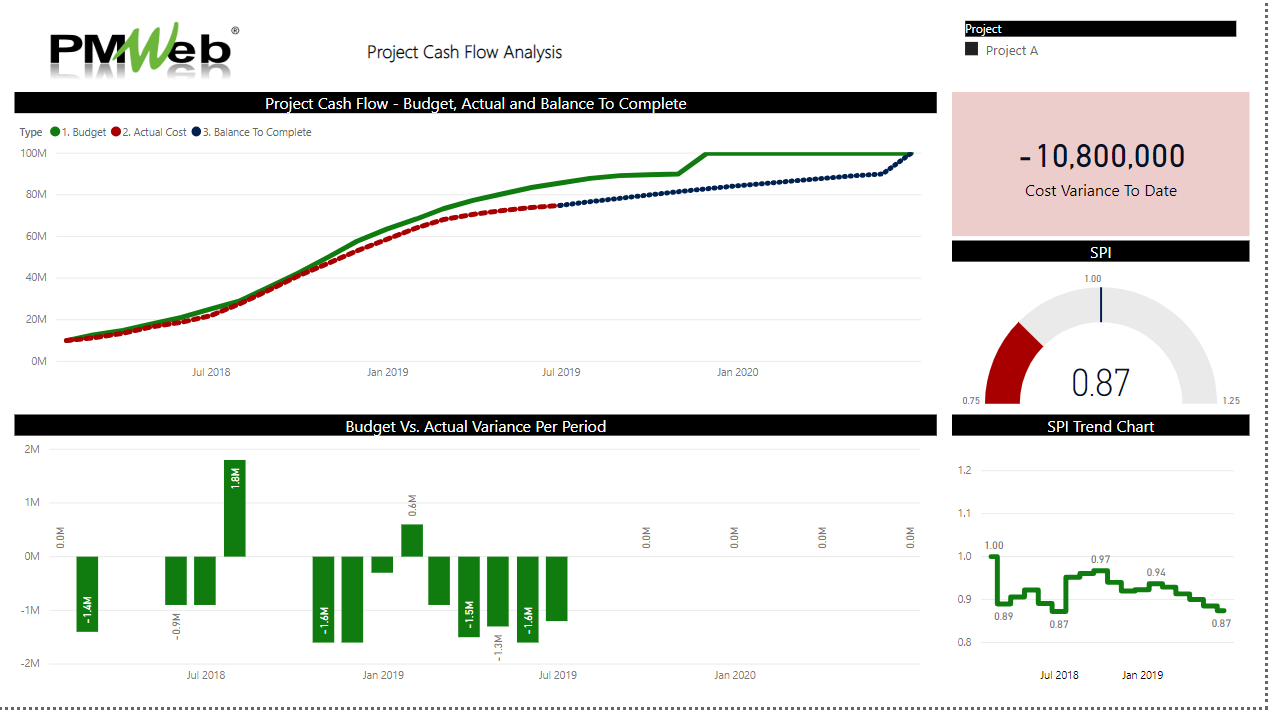