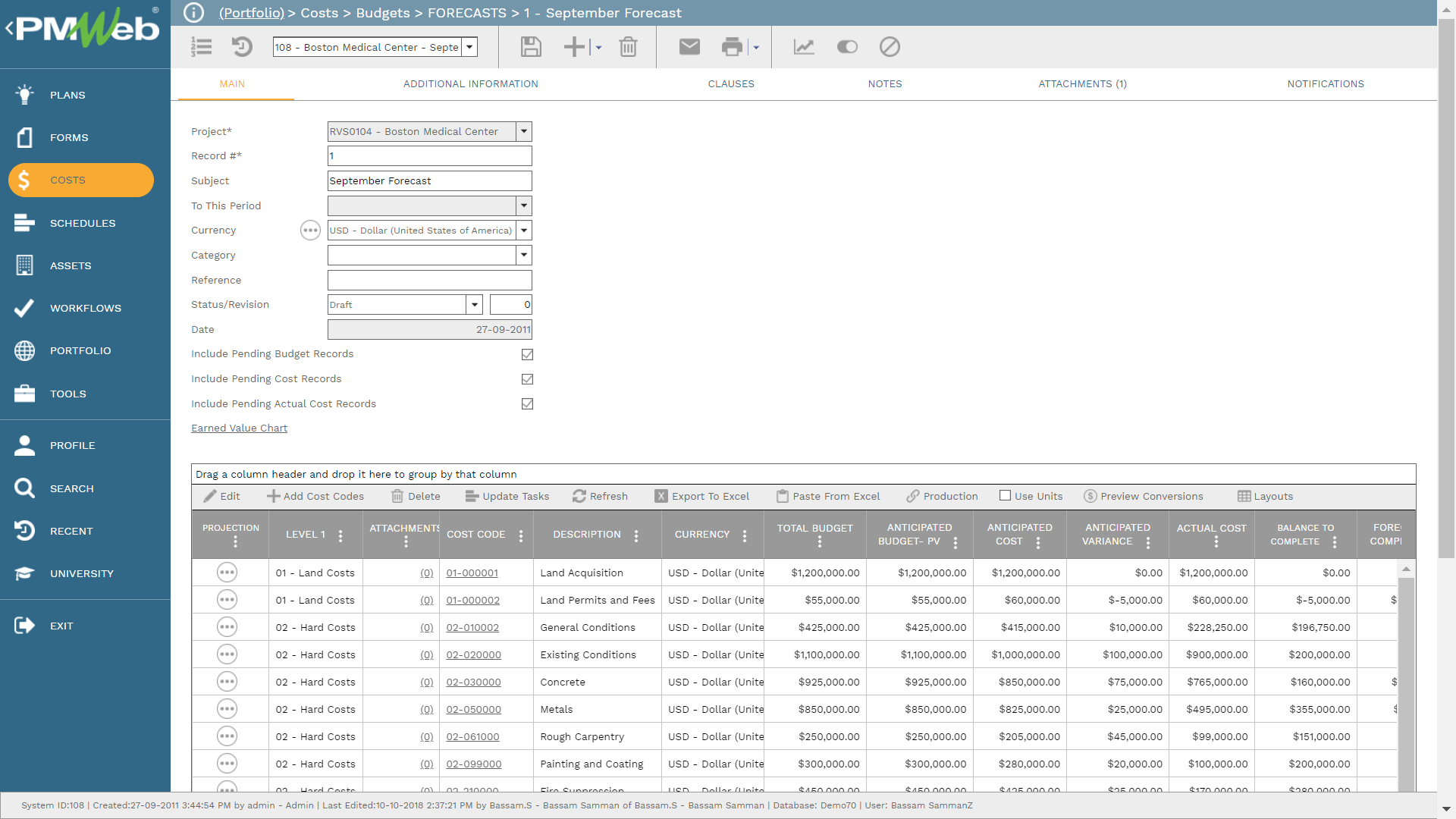 Those involved in delivering capital projects are always keen on ensuring that their approved project budget is respected and the project’s actual cost should never exceed this budget, otherwise the project is a loss. The Earned Value Method (EVM) is one of the proven project management techniques used for monitoring and controlling the project performance budget as well as providing a trusted technique to forecast the expected cost at completion. The concept of EVM is based on managing four variables, the project approved budget (BAC), the actual project cost for the completed scope of work to date (AC), and the earned budget performance for the completed scope of work to date (EV). 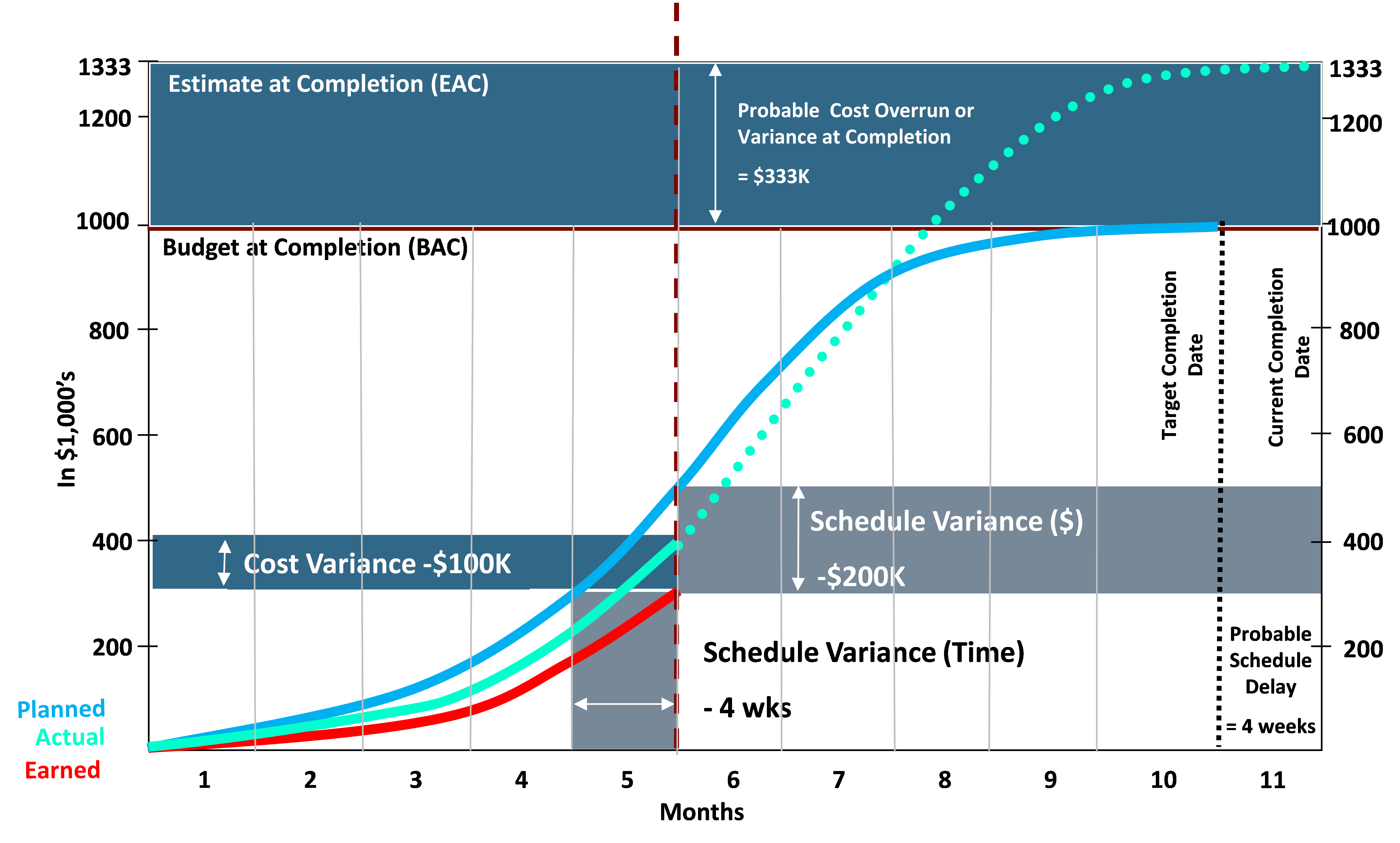 Project management information systems (PMIS) like PMWeb provide the organizations with a single integrated platform to monitor, evaluate and report the project’s earned value performance. PMWeb budget and progress invoices modules will provide the needed data for the PMWeb forecast module to run the earned value analysis for the performance period. The budget module will provide the Budget at Completion (BAC) and the planned Budget Value (PV), the progress invoices module will provide the Actual Cost (AC) while the forecast module will calculate the Earned Value (EV) from the imported project schedule activities’ percent complete values multiplied by the Budget at Completion (BAC) for each cost item. PMWeb forecast module also maintains the history of earned value values and results for each period of the project life cycle duration.

The captured project’s performance data can be designed in different forms and formats to Fulfill the organization’s reporting requirement. Nevertheless, the one that is used most is a report that details the earned value method key values for each period which include the approved budget at completion (BAC), planned budget value for the current period (PV), earned value for completed works (EV), total actual cost to date (AC), estimated cost to complete the balance of the works (ETC) and project estimate at completion (EAC). In addition, the report will display the variances at each period those being the schedule variance (SV), cost variance (CV), and the estimated cost variance at completion (VAC). Further, the report will display the schedule performance index (SPI) and cost performance index (CPI) for the same periods. The report will also display the variances and performance indices trend charts. 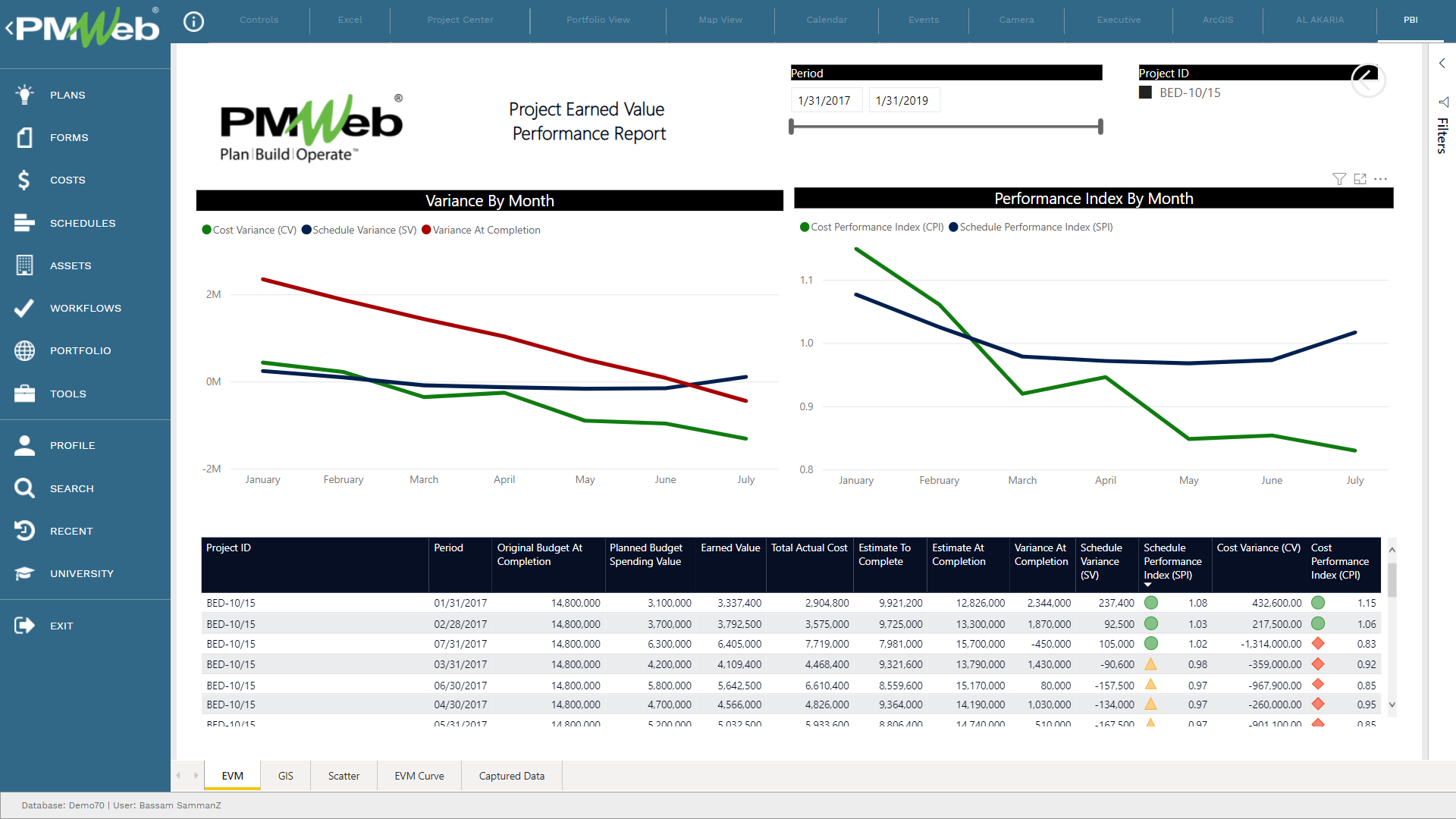 In addition, the organization could monitor, evaluate and report on the variances and indices across the organization’s complete projects portfolio or selected projects that could be part of a program or any other attribute like location, type, and sponsor among others. The organization might display the earned value as a scorecard or link it to a map that will display the location of the selected projects as well as the performance indices. The size of the bubble on the map could be used to reflect the project’s approved current budget. 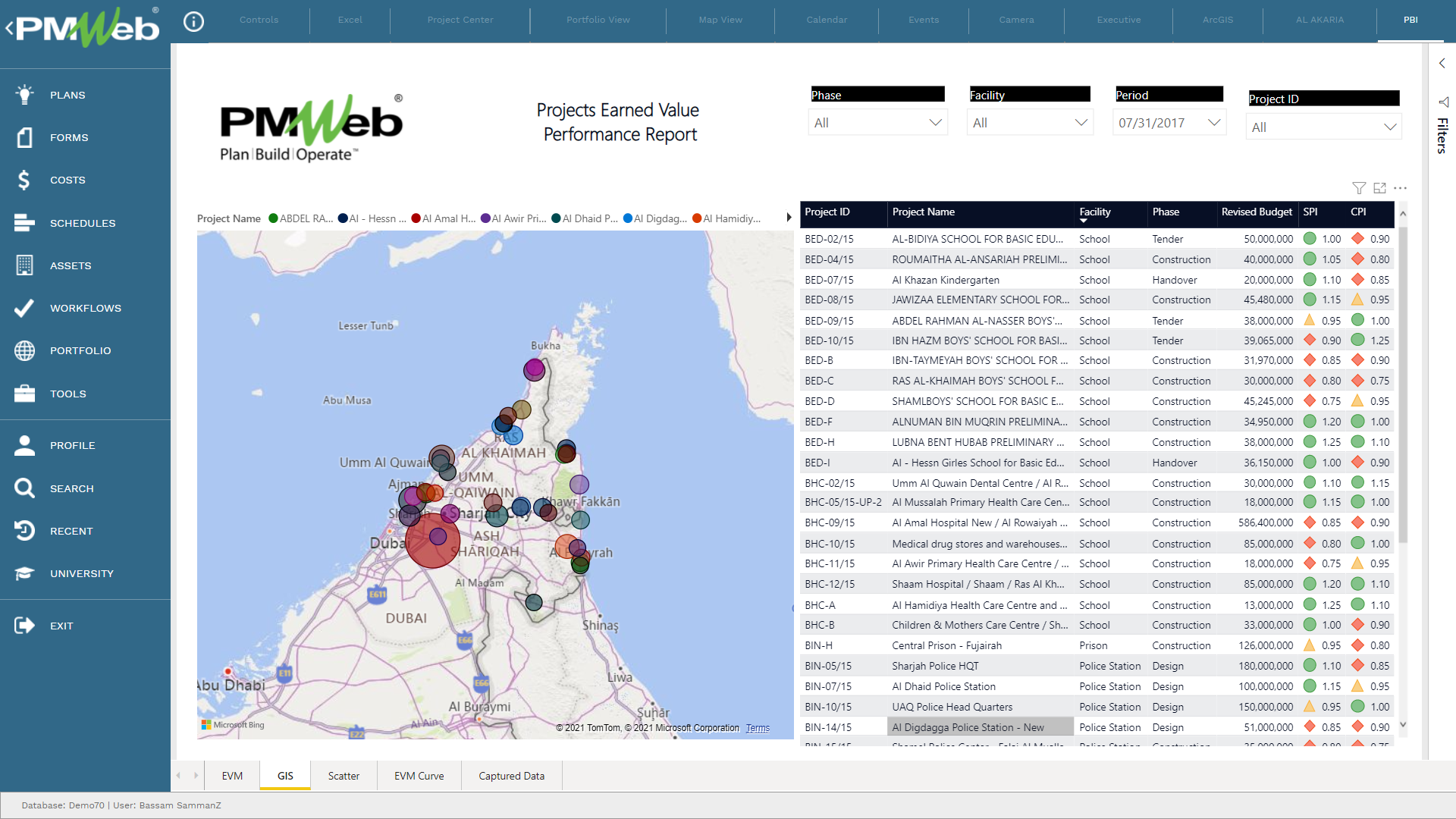 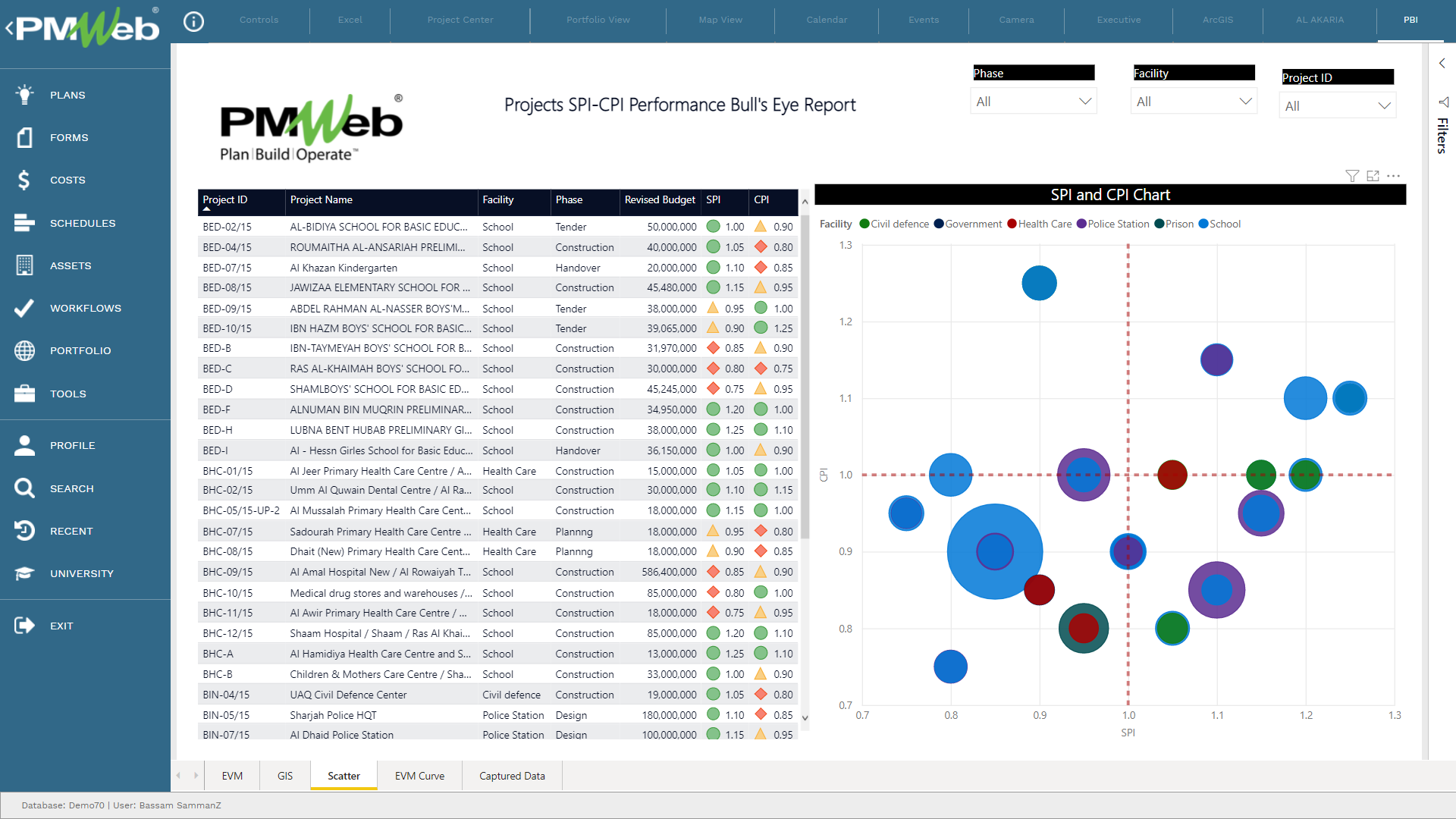