Article #002 Why Having Daily Reports is a Must for Lost Productivity Claims Analysis? 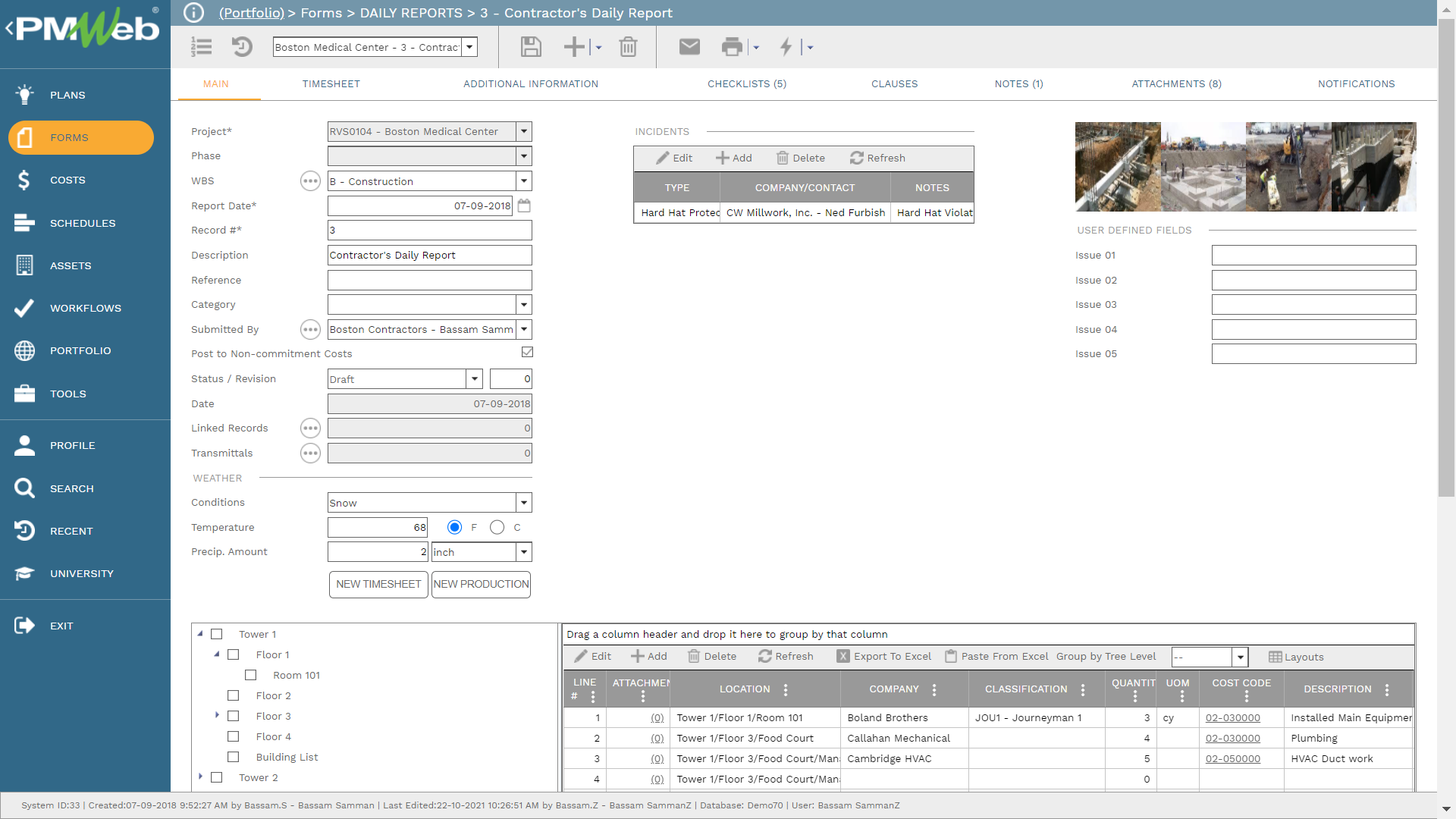 Claims of ‘lost productivity and associated additional costs are one of the most difficult claims to prove. This is because productivity losses are often difficult to identify and distinguish at the time they arise. Therefore, most claims for lost productivity are dealt with retrospectively and the contractor is forced to rely on project records to try and establish a cause and effect for identified losses. Those losses are associated with the work that is carried out less efficiently than it would have been, had it not been for the cause of disruptions such as actions or events which hindered the contractor from performing the project’s scope of work as it was originally planned.

The “measured mile approach” or “window of productivity” is the most acceptable method for calculating lost productivity costs. Those methods compare identical project schedule activities in impacted and non‐impacted periods of the project to estimate the productivity loss caused by the impact of events that disrupted the works. Those methods are preferred because they are based on actual contract performance rather than what was originally planned. As such it compares actual performance on-site with actual performance, not some theoretical planned performance.

Daily reports are usually the most proven source of information to perform the “measured mile approach” or “window of productivity” analysis. This is due to two important points associated with daily reports. The first is that it is a formal project document that the contractor is obliged to submit on daily basis to the project owner or his authorized representative. In other words, no one can argue the content of the daily report when it is formally submitted and approved. While the second point is that it includes the actual work achieved on each particular day and the actual resources spent for performing this work. This is the information that the measured mile approach” or “window of productivity” analysis needs.

The daily report module in PMWeb Project Management Information System (PMIS) is one of the many default ready-to-use modules available in the application. To ensure that the daily report is capturing all the needed progress details for the complete project, it is a very common approach that each project engineer responsible for certain sections or sectors of the project is responsible to complete his/her daily report for that section or sector. As an example, different project engineers could be assigned to different floor levels of a high-rise building. Accordingly, each daily report will capture the date of the report, WBS level it relates to, category, description, weather conditions, and submitted by who. Sometimes, different project engineers could be assigned to different building systems like mechanical works, finishes work among others. The important point to remember is that daily reports need to capture the project’s progress at the desired granular level.

The timesheet tab of the daily report will capture the detail of all predefined resources, labor and non-labor, used during the same date. For each resource, the report will capture the start and finish hours of that resource, whether those hours are based on regular pay, overtime pay, weekend pay, or simply idle, and the activity that those hours were spent against and any notes that could provide better insight on those reported resource hours. In addition, each resource row will capture the trade that relates to the completed work from the same predefined list used in the detail tab (ductwork, paint, plastering, etc.). PMWeb allows having additional fields for the completed works if needed. 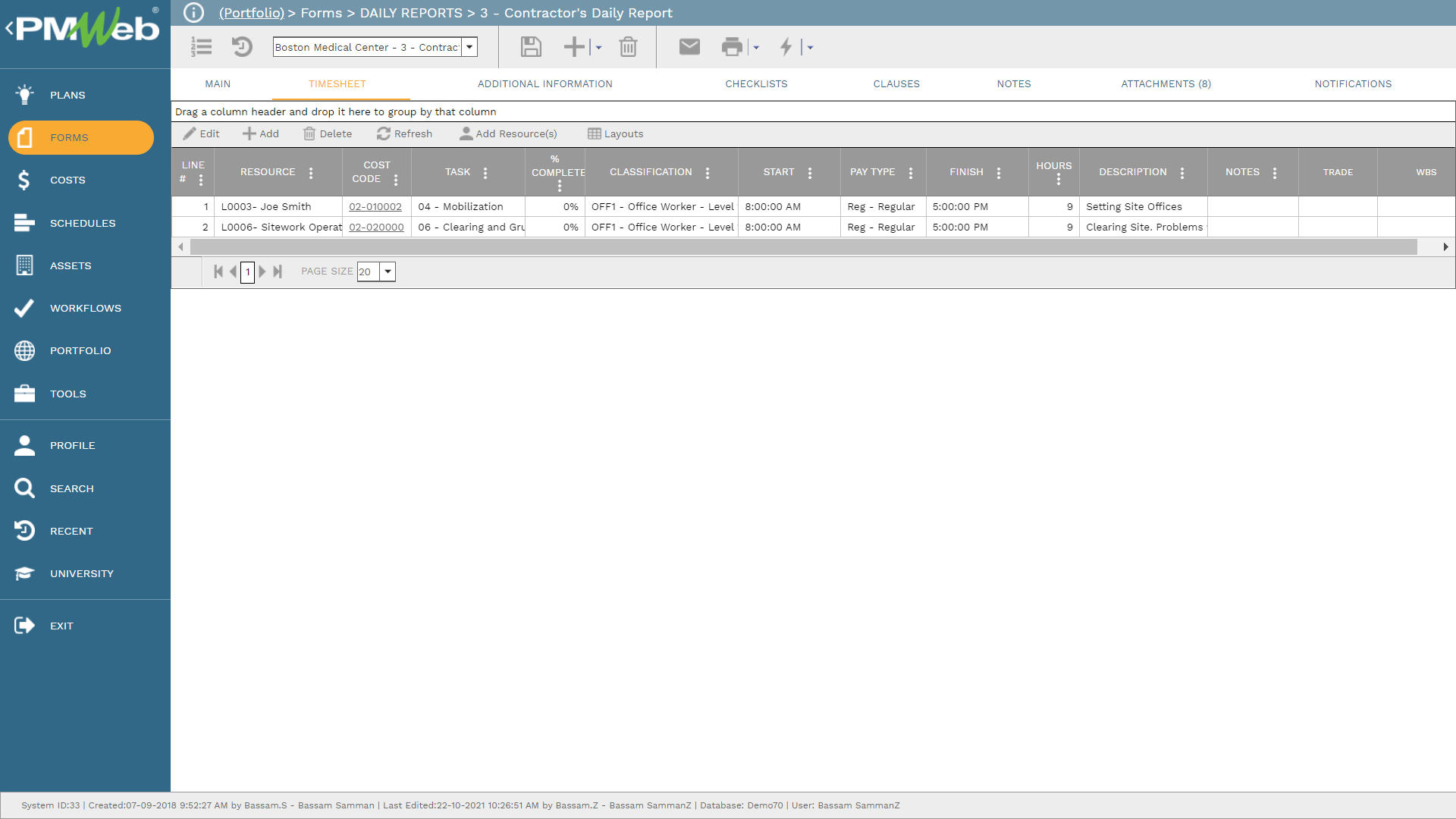 Another important feature of the PMWeb daily report module is checklists. The checklist will include a list of different questions that the project engineer needs to verify and respond to as they are mainly designed to prompt the engineer if he/she believes that events or incidents occurred on that date that could have disrupted the planned performance of the scheduled activities. This will be the earliest and most proactive alert that the contractor could expect to receive from the project site team. 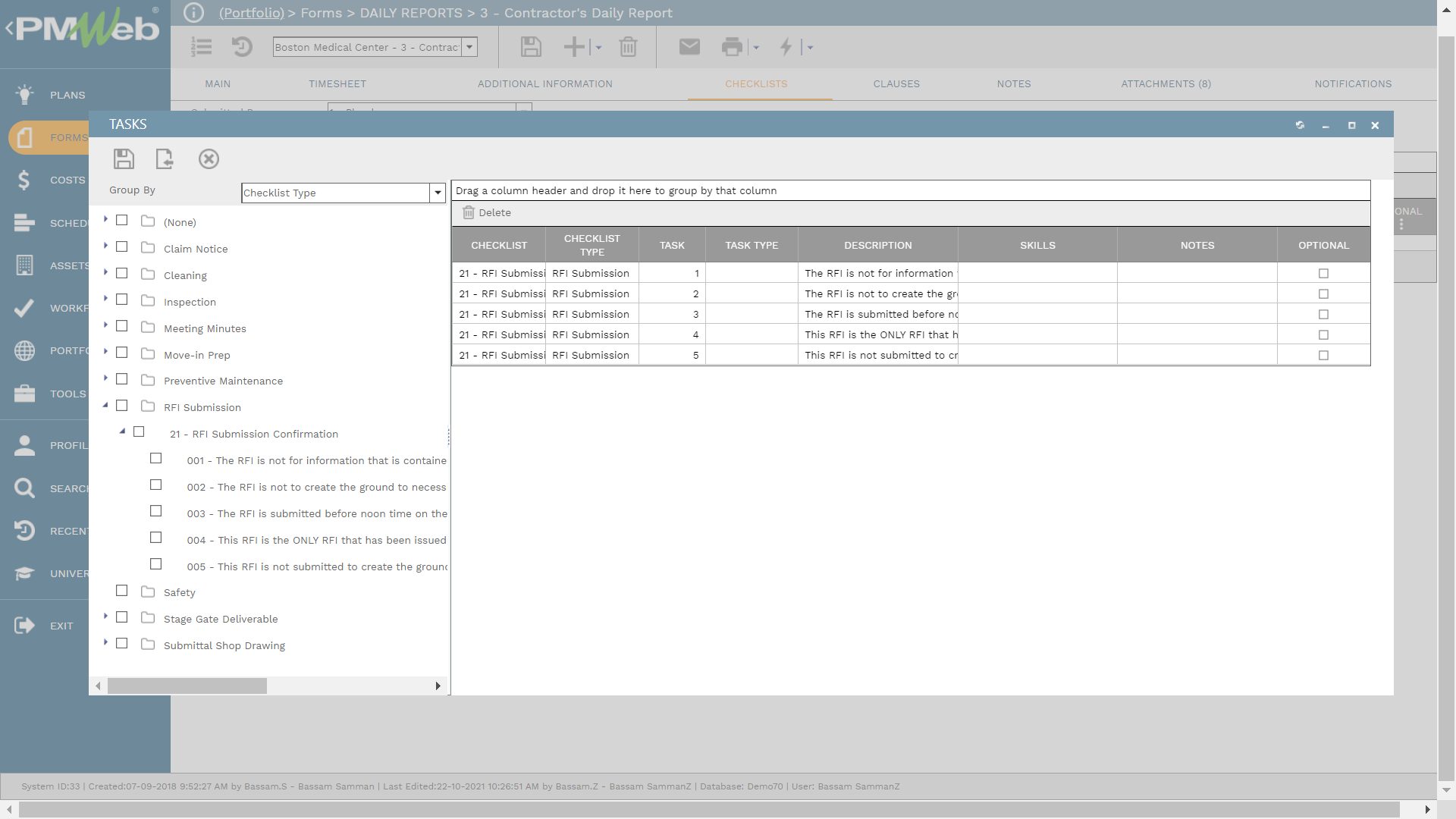 A workflow will be assigned to the daily report to ensure that it gets reviewed by the construction manager or any other designated senior managers of the contractor’s team before it gets formally submitted to the project owner or his authorized representative. The workflow could also include the contractor’s team responsible for commercial and claims matters as well as the project control team as the content of the daily report will be the basis for updating the project schedule later on. 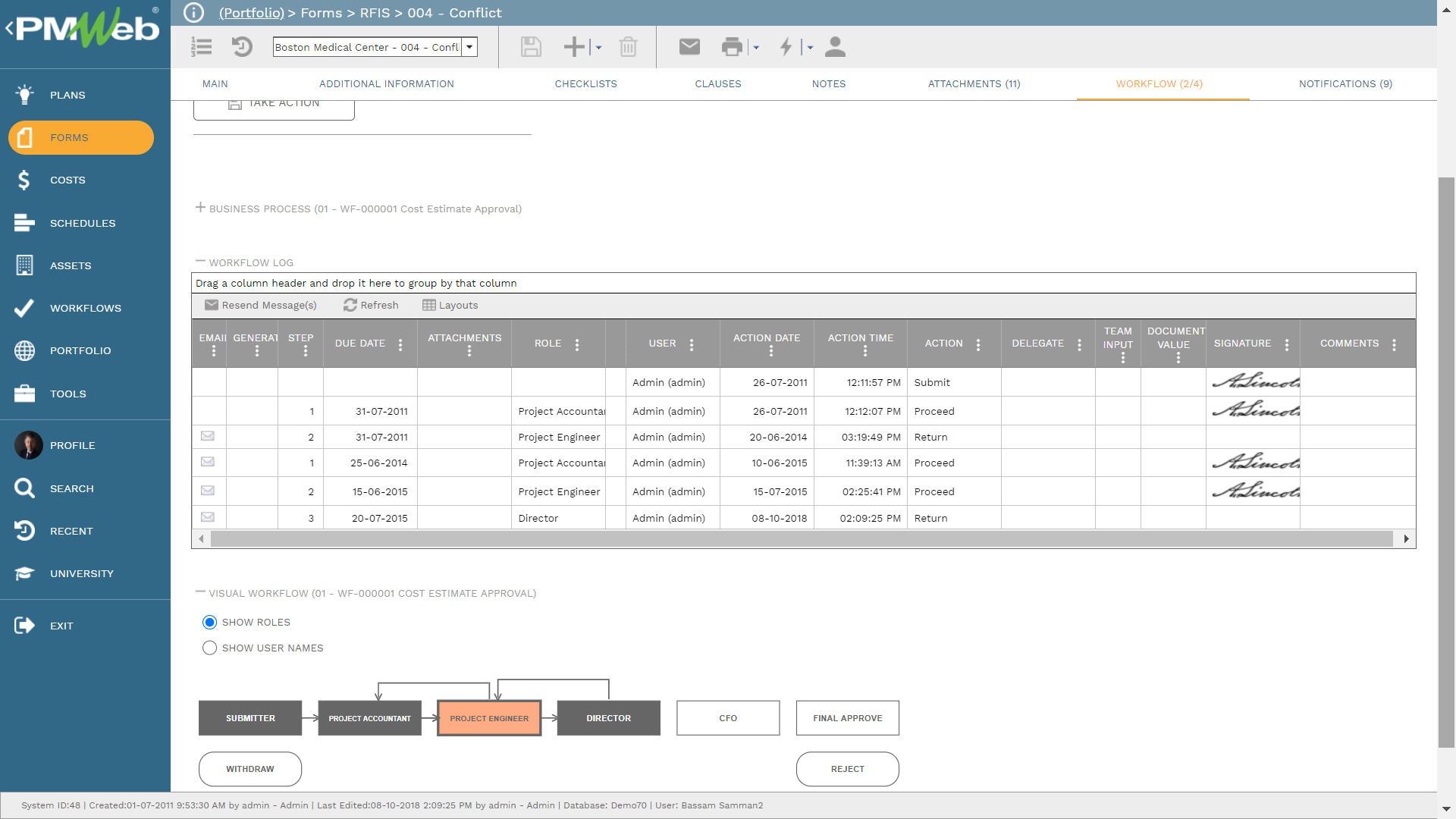 Although comments can be added to each step of the workflow steps by the reviewer, nevertheless, the notes tab allows adding more detailed comments by the project team regardless of the part of the review team or not. Those notes will be automatically time and date stamped along with the name of the note provider and the notes log will updated with the details of all notes made. Those notes will be of great value when it comes to better understanding the details of the events and incidents that could have disrupted the planned work for that particular date. 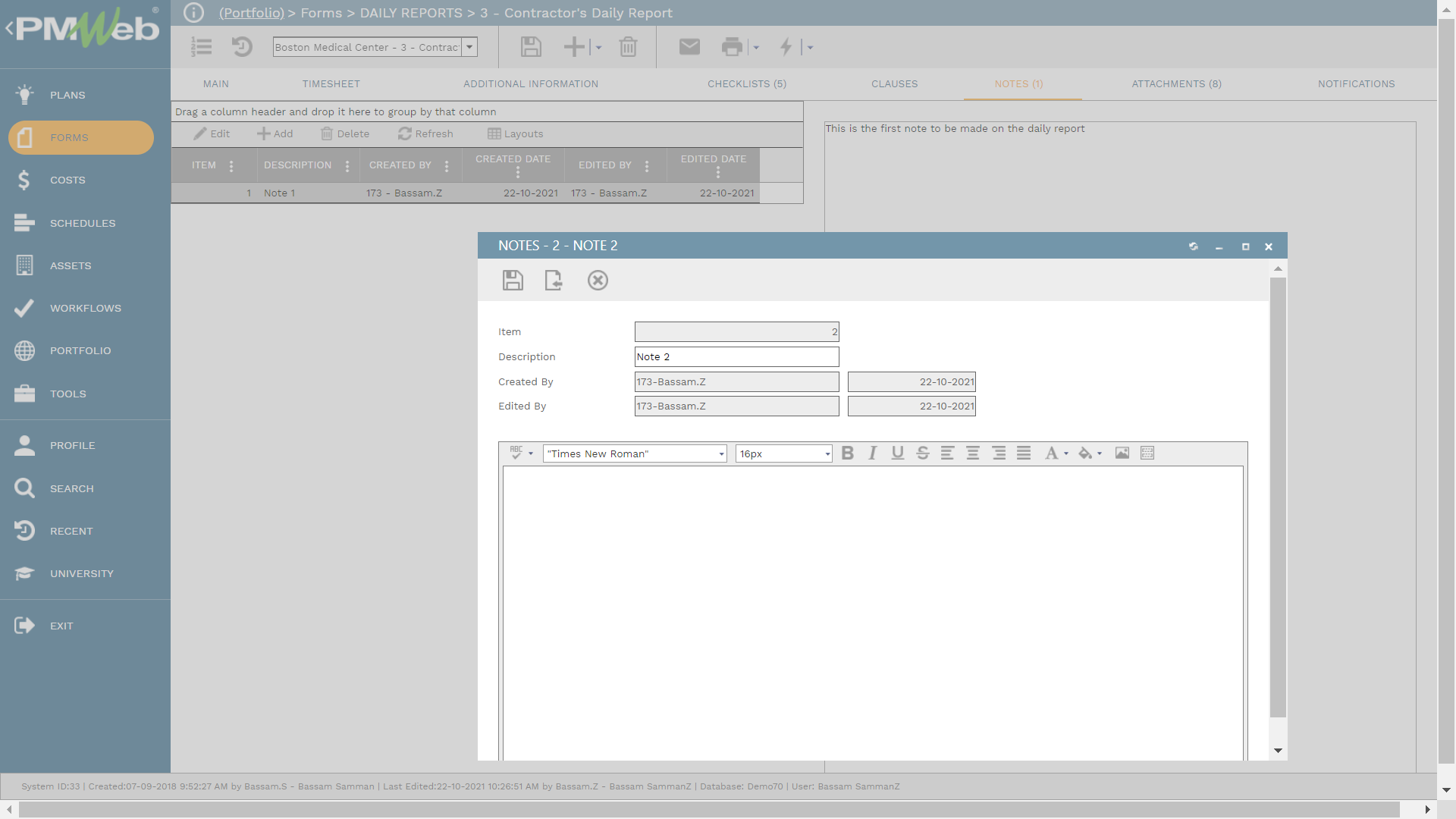 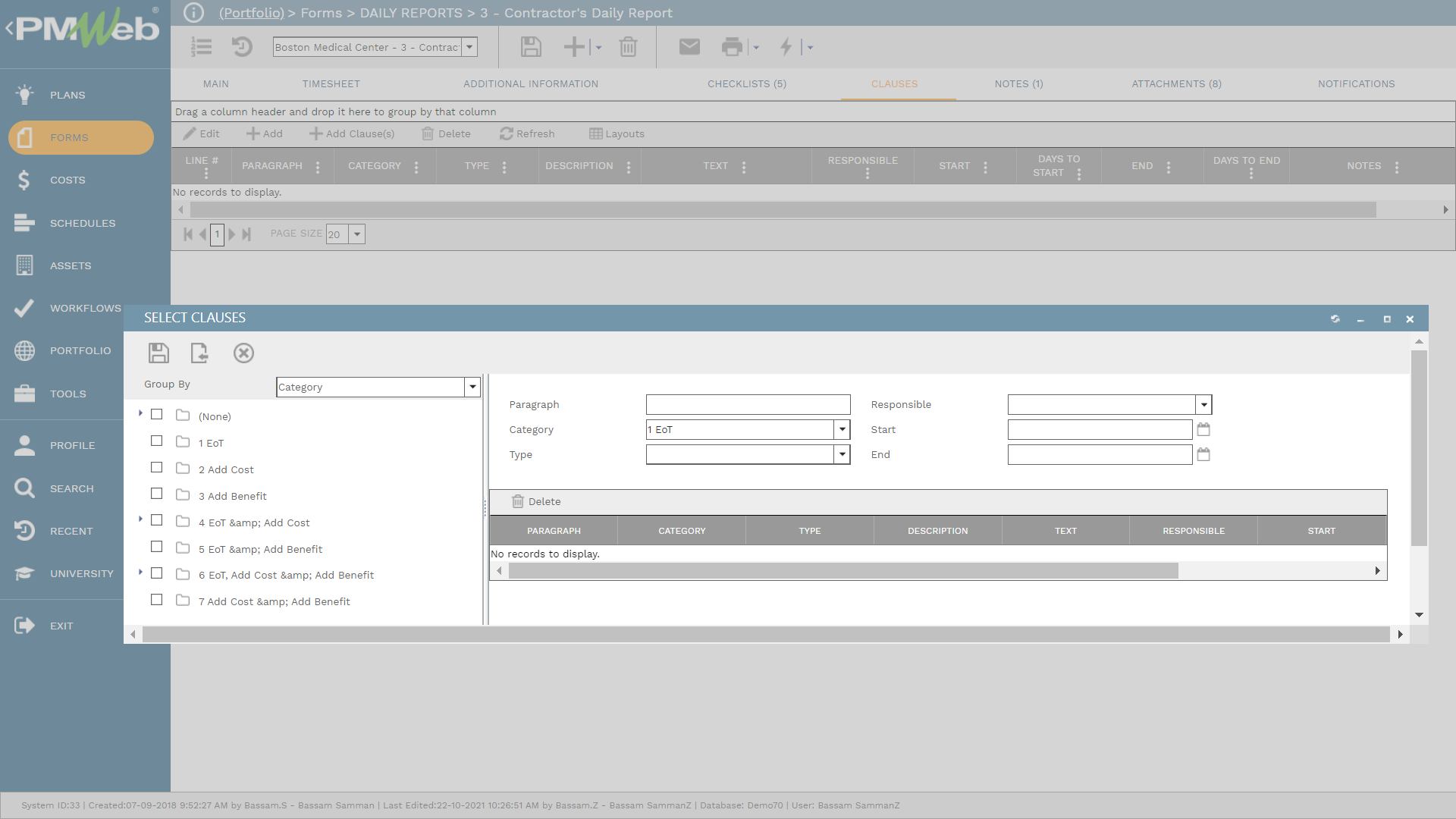 In addition to the formal workflow steps, those who have access to a specific daily report can share this report with other project team members or stakeholders who have access to PMWeb as well as those who do not. PMWeb notification tab will be used to capture all emails sent to share the daily reports with others may be to get their feedback or just to get them notified. 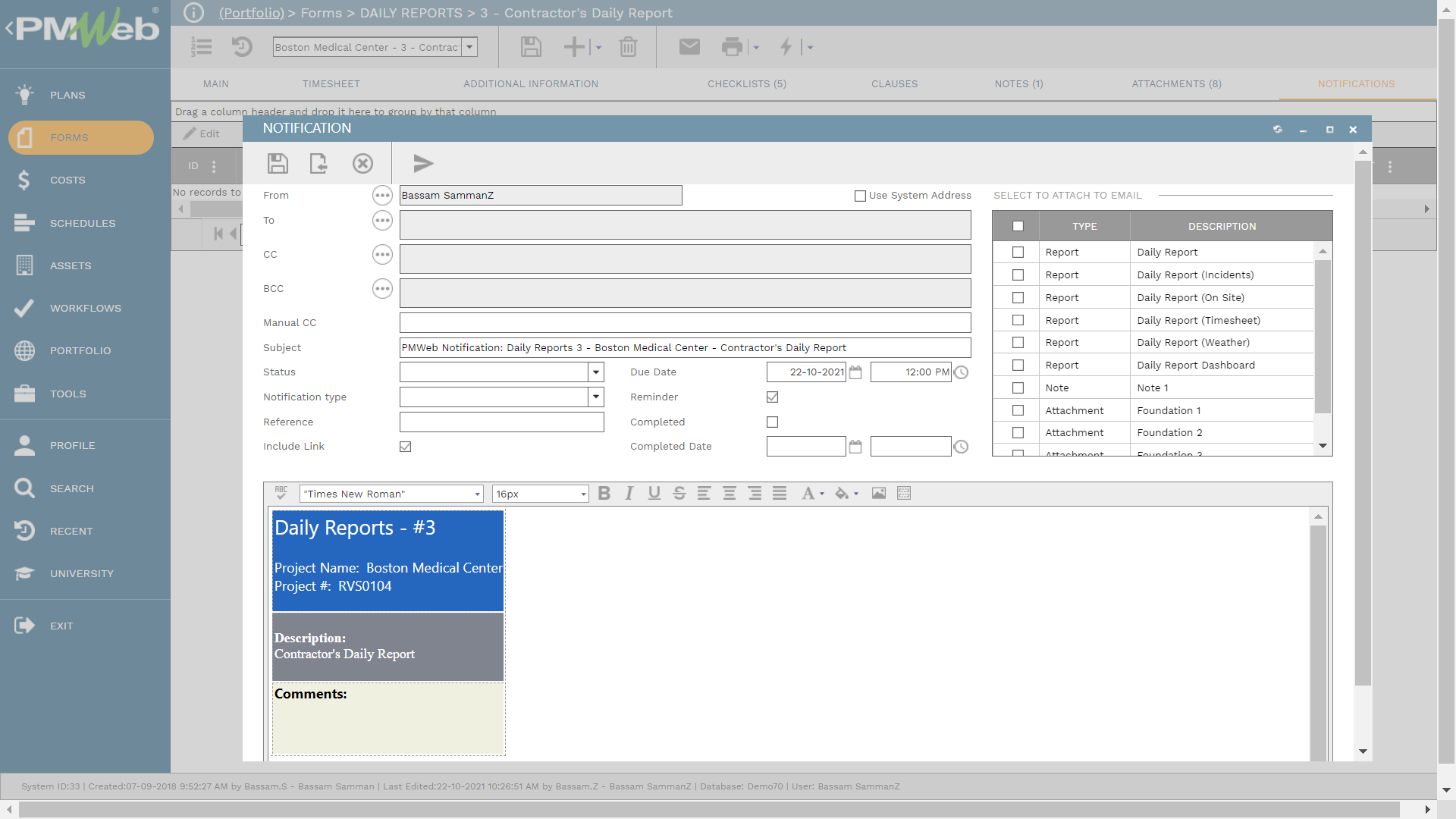 Of course, the data that can be captured by PMWeb daily report module is not limited to the above. For example, the specifications tab can be used to create an unlimited number of new user-defined fields that can be populated with additional information relevant to the daily report. The attachments tab can be also used to attach additional documents such as drawings, progress photographs, and specification sections, among others. The same attachment tab can be also used to link other PMWeb records and imported emails to that daily report. 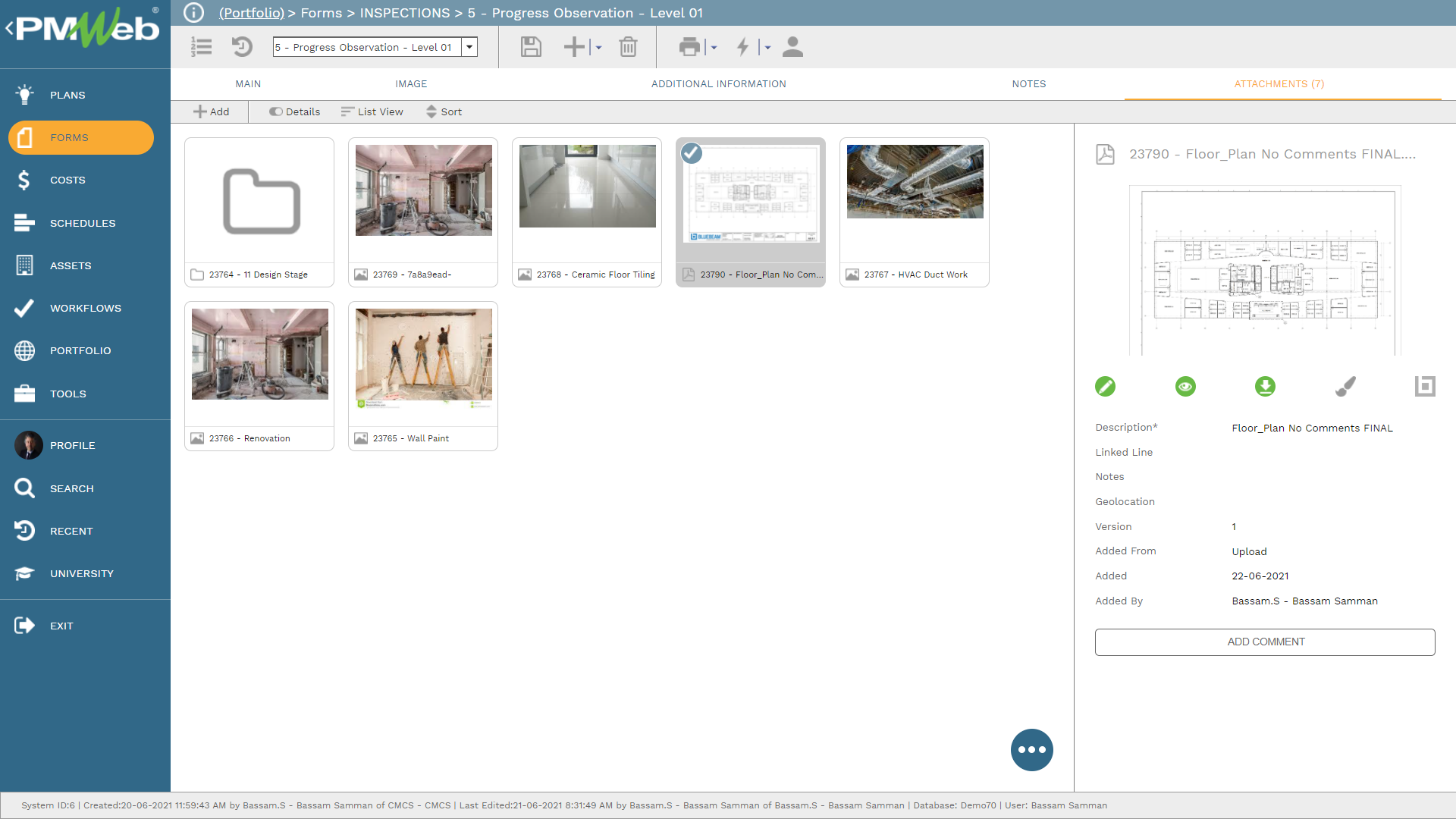 The data captured in daily reports will provide the contractor with real-time visualization of the achieved productivity rates for each trade on daily basis. By dividing the quantity of work completed for a specific trade, for example, paint works, by the total number of resource hours, for example, painters spent on that trade on that specific day. The captured data can be even segregated into “First Coat” and “Second and Final Coat” activities as well as the location of where this trade was performed as well as the project schedule activities that relate to that trade. 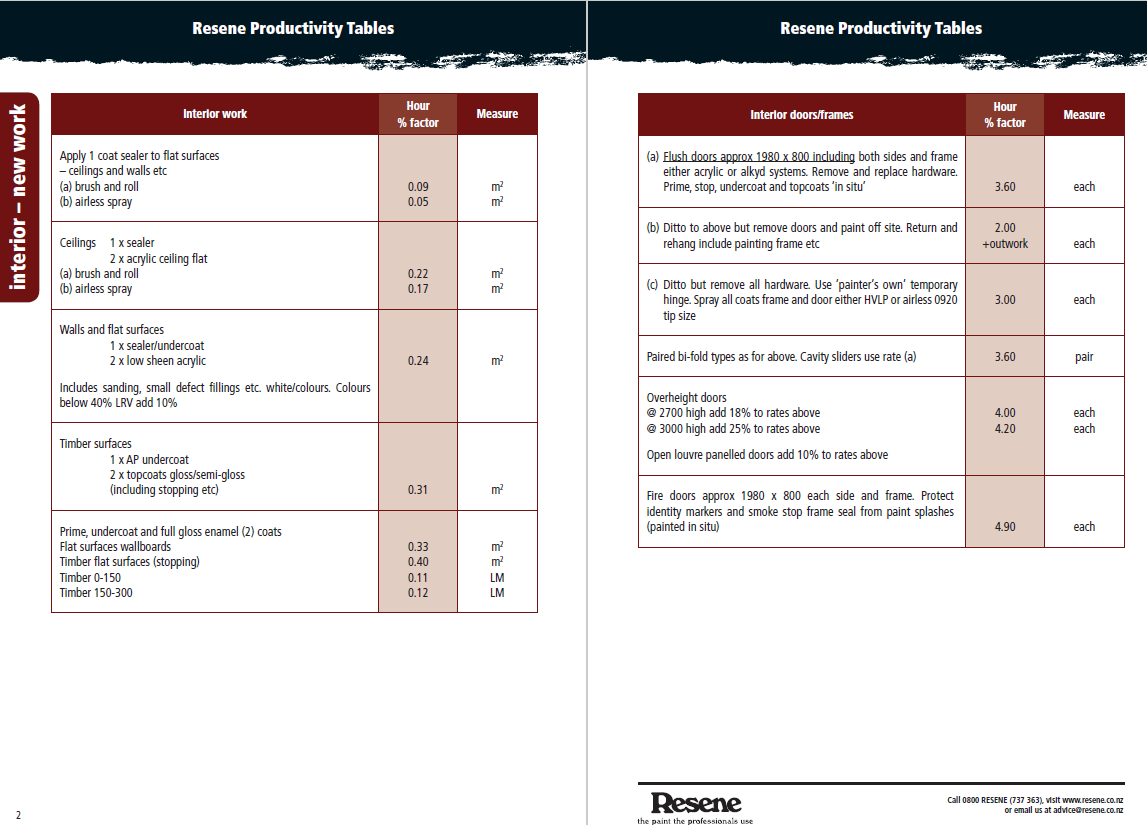 The Trade Productivity Report will capture and report on this information. For each trade, it will show the achieved productivity rate for the day, week, and month as well as the planned productivity rate for the same trade. The variance between planned and actual production rates will immediately alert the contractor of any unfavorable performance trend. This will allow the contractor to review, analyze and verify the reasons for those variances and if they are related to disruption events caused by the project owner or his authorized representative. The report will also identify periods where those trades have performed similar to or better than what was originally planned. Those periods will become the basis for the “measured mile approach” or “window of productivity” lost productivity analysis when needed. 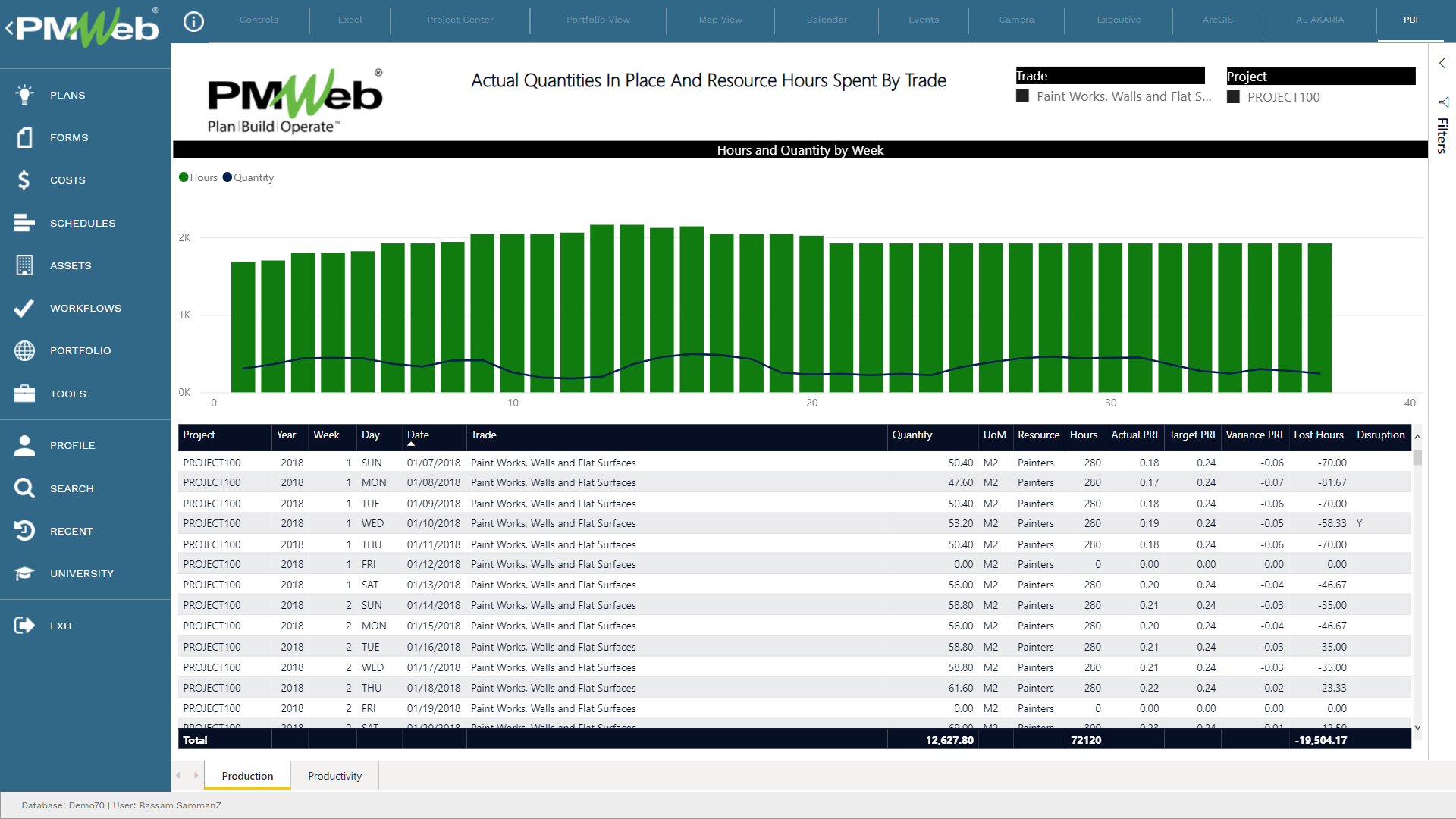 In other words, the Trade Productivity Report will serve two important functions. The first is by giving proactive real-time monitoring and evaluation of trades’ actual productivity rates while the second is providing the contractor’s claims management team with the needed information to submit the needed notice for the “Lost Productivity” claim as well as have to access to the complete supportive documents needed to prepare and present the “Lost Productivity” claim without wasting their effort in searching and locating those documents and records needed for this time-consuming analysis. 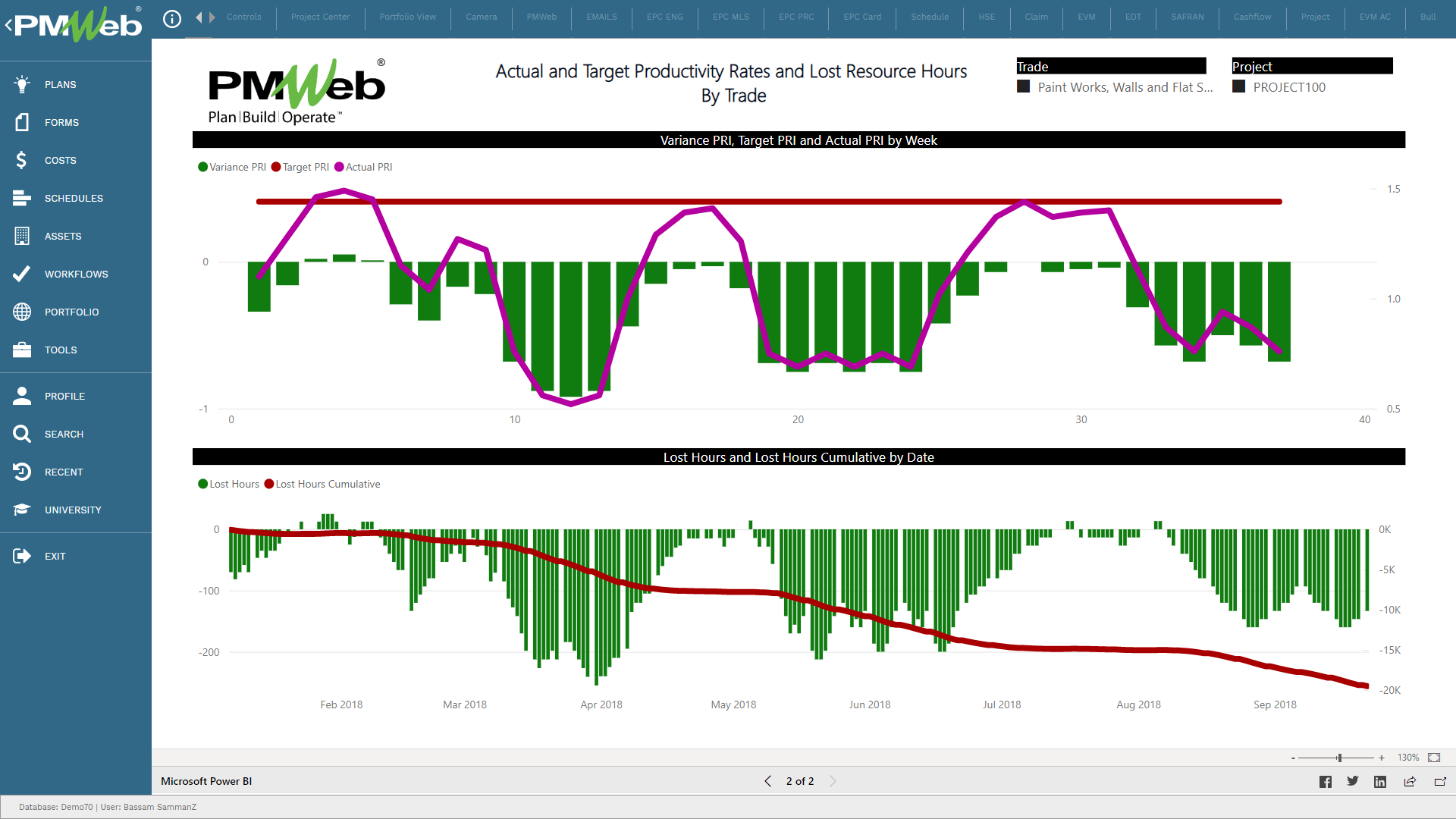