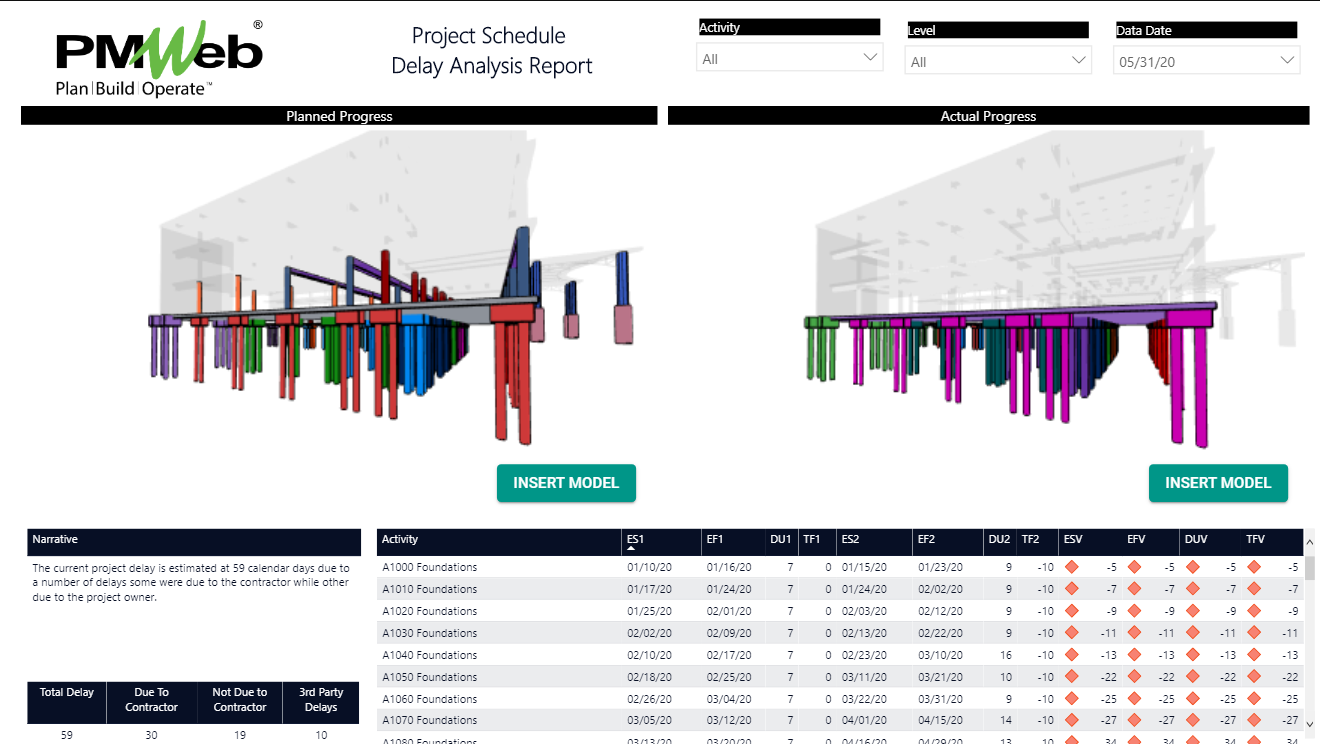 The concept of 4D scheduling had been available for capital construction projects for more than a decade, nevertheless, even nowadays the use of 4D scheduling is mainly intended to be used by professional planners or at least for stakeholders who knows how to run those software applications as well as who are willing to pay for the investment associated in having access to such solutions.

On the other hand, there are many other project stakeholders, executives, and non-executives, who are keen to use the principle of 4D Scheduling to better understand and visualize the progress achieved on the project, compare planned with actual progress as well as have a better understanding of delayed activities. Most of those stakeholders neither have the knowledge and skills that planning and scheduling engineers have nor want to learn how to use or invest in acquiring the software applications needed for this 4D Schedule analysis. Nevertheless, the one thing that they will not comprise is that the 4D Schedule reporting needs to be based on trustworthy and traceable data sources. In addition, those stakeholders will not accept raw 4D schedules that are not accompanied by an explanation of what is being shared and presented to them.

The proposed 4D Schedule Delay Analysis Report as well as all other 4D Schedule Analysis reports will be developed using MS Power BI business intelligence and data visualization tool. The 3DBI visual developed by KG-DEV called 3DBI (https://kg-dev.be/) will be used to display the BIM model extracted from Autodesk Revit in MS Power BI. To ensure that the project schedule activities are associated with their relevant BIM object or asset, a field for the project schedule activity ID will be added as one of the data fields in the Revit data tables. The project schedule data along with the narrative for the delay and delays responsibilities will be captured from PMWeb which is the Project Management Information System (PMIS) used for this 4D Schedule Analysis report. 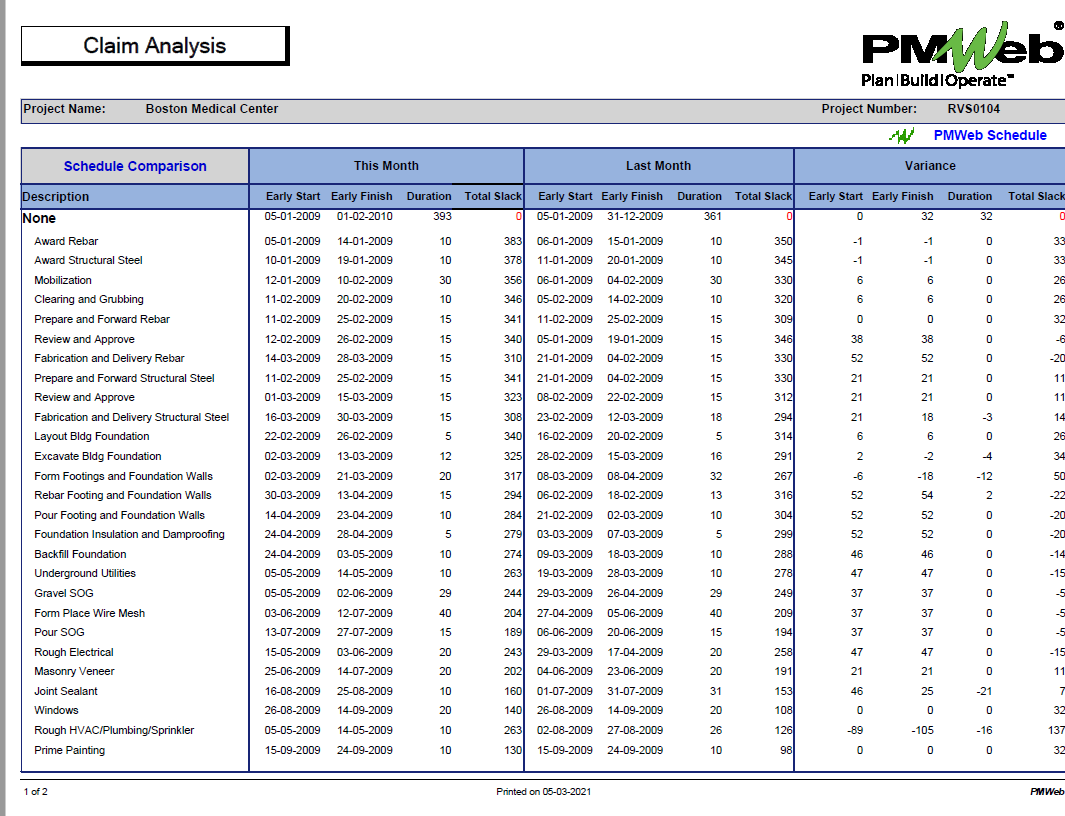 PMWeb will be also used to create the input form for the narrative text that will be part of the 4D Schedule Analysis reports and for which it needs to be completed by the planning and scheduling engineer who is responsible for analyzing and reporting on project delays. The content of this form can be configured to include all fields that could be needed for the reports, nevertheless, as a minimum, it should include the progress period data date, contractor name, narrative text, total schedule delays to date, delays due to the contractor, delays that are not due to the contractor and delays due to third parties and neither the contractor nor the project owner or his/her authorized representatives. In case there is a need to share the report in languages other than English, then the form should include a field for capturing the narrative in the other language which could be for example Arabic.

The 4D Schedule Analysis Narrative Report will be created using PMWeb visual form builder where it will include all those fields. The form needs also to be attached with all supportive documents including the updated schedule reports and any other documents that need to be shared to verify the content of what is being reported.

In addition, a workflow will be assigned to the form to ensure the formalization of the submit, review and approve tasks. The workflow will map those tasks along with the duration assigned each as well as the project team member responsible for performing the task. This will ensure the trustworthiness and traceability of the reported information. 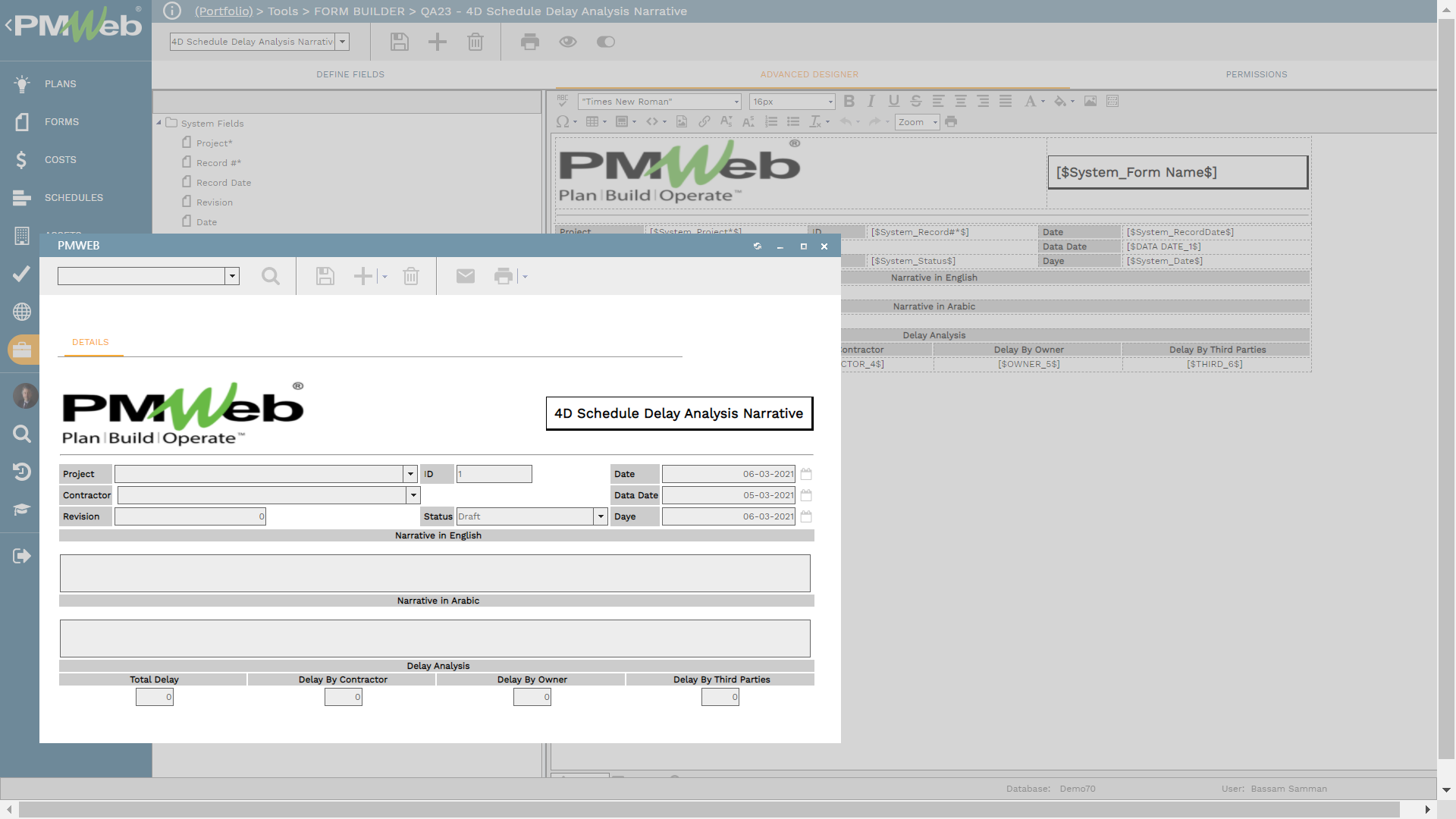 The data captured in PMWeb will be used to update the information displayed in the 4D Schedule Analysis report as new schedule data becomes available at the end of each progress period. In addition, the report reader can select specific activities to be viewed in the report or by selecting the values of any other attribute defined in the report. In addition, selecting a BIM object from the BIM visual will automatically adjust the content of the report to reflect the data associated with the selected PMWeb object or asset. 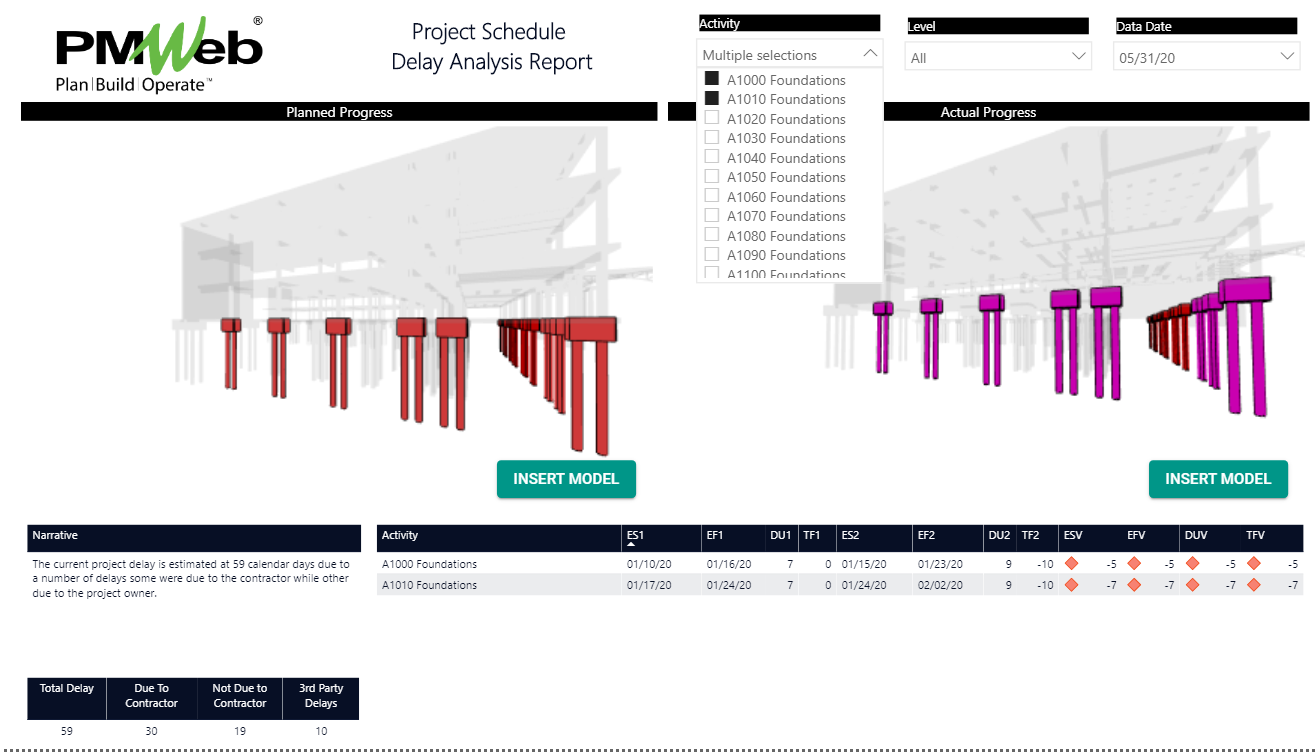 The proposed 4D Schedule Analysis report does not replace the need to have full 4D Scheduling that requires having dedicated software applications but they are full a requirement by the stakeholder to have a better visualization of the project schedule information. The same approach of associating project management data with BIM models also adds great value to other processes like submittals, procurement, work inspection requests, testing and commissioning inspections and tests, punch lists, request for information, interim payment certificates among other project information captured in a Project Management Information System (PMIS) solution like PMWeb.